Voting for next project on timeghost.tv

New member of the Time Ghost Army here! I signed up after watching the newest youtube video saying that members of the Time Ghost Army could vote for what topic would be covered next. Everything seems to point to the Patreon page but I already have a subscription directly through timeghost.tv so how do I vote?

Thank you for your time

You can vote here

I have the exact same question. I support directly via the website because I find Patreon to be a very distasteful company. Where do we vote? The only links I’ve seen keep taking me to Patreon.

I used the link but it sent me to the Patreon page where it told me to become a patron :
I guess I should’ve just made a patreon pledge rather than directly through timeghost.tv?

Yesterday, we launched the vote for the new TimeGhost series on Patreon. Because there are many who support us directly here on timgehost.tv, just the Patreon poll is not enough. Unfortunately, we haven’t yet succeeded in making a closed off ‘member section’. So for now, if you support us and wish to share your preference for the upcoming series. Email your preference to community@timeghost.tv. Everyone who financially contributes to us via timeghost.tv is eligible to vote. You can vote until T…

I would vote for “continue and finish World War II before starting anything else new”.
The war is about to get much bigger anyway… or so they say

Don’t worry - we have that covered as well

Here are the poll results (These are only Patreon numbers, but the TimeGhost.tv votes didn’t impact the order of the results).

Everyone supporting us at a TG ARMY SPECIALIST or higher (upwards of $9 per month) is now able to vote on the order of the top three. More information here → Voting on TimeGhost Series for TimeGhost.tv Supporters Round 2 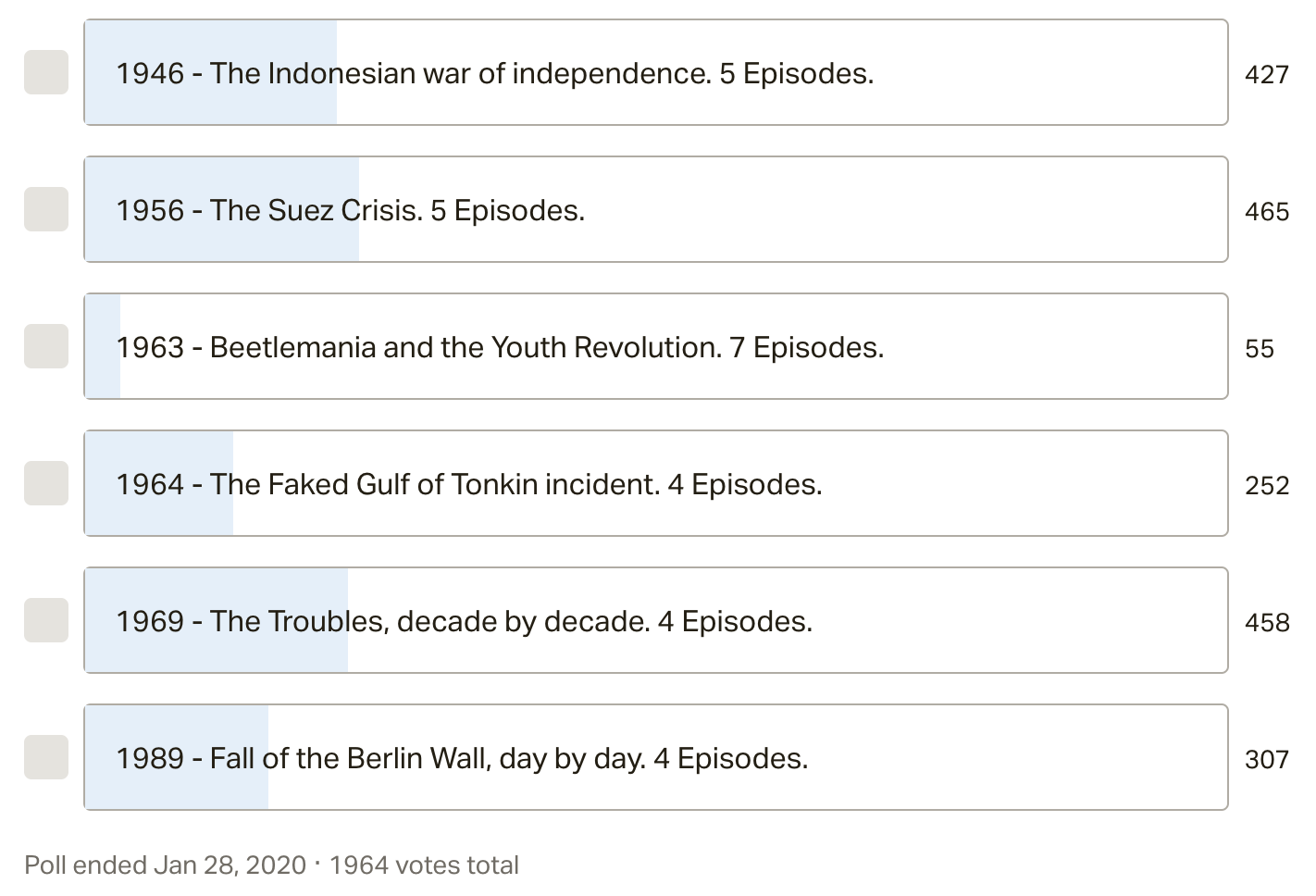 The reason I thought Vietnam would have higher was because I thought the crew might be interested in a nuanced take on the “incident.” I’ve also written a bit about U.S. intervention pre-Gulf of Tonkin in another thread.

I’d often joke that the '60s were the stinkier version of the '20s, at least the latter half of the decade. Also, that generational shift in the '60s is still somewhat of a controversial issue today, at least from my experience. Tell me if I’m wrong on that. Another still-controversial issue is Vietnam. Even without the Gulf of Tonkin “incident,” U.S. involvement was bound to happen in one way or another (this is the Cold War, after all). Hell, they were already interfering before the “inciden…

Joram, you have put the link to my reply, not to your post. I fixed it for you: Voting on TimeGhost Series for TimeGhost.tv Supporters Round 2