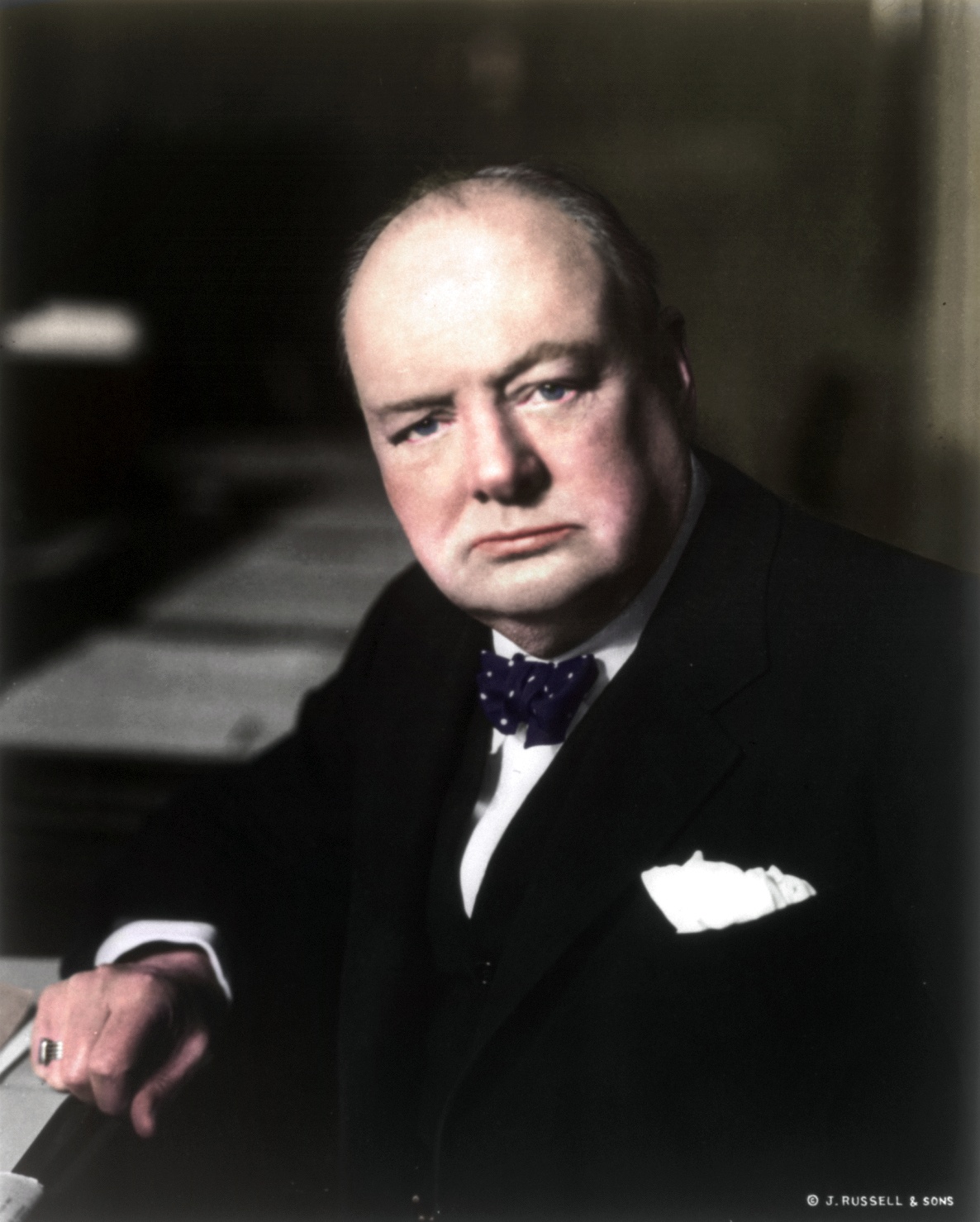 As soon as I heard last night that Japan had attacked the United States, my first feeling was that Parliament should be immediately summoned. We are fighting for the maintenance of a parliamentary system, and it is indispensable to our system of Government that Parliament should play its full part in all the important acts of the state and on all the great occasions in the conduct of the war. The great number of members who attended in spite of the shortness of the notice shows the zeal and strictness with which the members of both Houses attend to their duties.

You will remember that a month ago, with the full approval of the nation and of the Empire, I pledged the word of Great Britain that should the United States become involved in a war with Japan, a British declaration would follow within the hour. I therefore spoke to President Roosevelt on the Atlantic telephone last night with a view to arranging the timing of our respective declarations. The President told me that he would this morning send a message to Congress, which of course as you all know is the instrument, the constitutional instrument, by which alone a United States declaration of war can be made.

There has been for a long time in Japan a number of military societies – secret societies – which have asserted their view of what the policy of Japan should be by murdering the Ministers whom they thought were not sufficiently “jingo” for their tastes. And it is to these bodies that the most strange and violent action of Japan’s, so fateful for her future, must be ascribed.

In view of the attack, and of this declaration, there was no need to wait for the declaration by Congress, and in any case there was the complication that American time is nearly six hours behind ours. The Cabinet, therefore, which met at half-past-twelve today, have authorized an immediate declaration of war upon Japan. Instructions to this effect were sent to our Ambassador in Tokyo, and the Japanese chargé d’affaires in London and his staff have been given their passports.

Meanwhile, hostilities have already begun. The Japanese began a landing in British territory in Northern Malaya at about 6 o’clock – that’s 1 a.m. local time yesterday – and they were immediately engaged by our troops who were there waiting for them.

The Home Office measures against Japanese nationals were set in motion a little after 10 last night. You will see, therefore, that no time has been lost, and you will see also that we are actually ahead of our engagements.

The Dutch Government in the East Indies – the Royal Netherlands Government – who preside over the important Oriental possessions of Holland, at once marked their solidarity with Great Britain and the United States. At 3 in the morning the Netherlands Minister informed our Foreign Office that his Government were telling the Japanese Government that in view of the hostile acts perpetrated by Japanese forces against two powers with whom the Netherlands maintain particularly close relations, they consider that, as a consequence, a state of war now exists between the Kingdom of the Netherlands and Japan.

I don’t know yet what part Siam will be called upon to play in this fresh war, but we have reports that Japanese troops have landed at Singora near the Kra Isthmus, which is in Siamese territory on the frontier of Malaya, very close to where the landing was made in our own territory. Just before Japan went to war – on the day before – I had sent the Siamese Prime Minister, or Thailand Prime Minister, the following message:

There is a possibility of imminent Japanese invasion of your country. If you are attacked, defend yourselves. The preservation of the true independence and sovereignty of Thailand is a British interest, and we shall regard an attack on you as an attack upon ourselves.

This afternoon we have had the speech of the President of the United States, addressed to the Congress under the most formal and solemn circumstances, and calling for an immediate recognition of a state of war.

It is worth while looking for a moment at the manner in which the Japanese have begun their assault upon the English-speaking world, and particularly upon the United States. Every circumstance of calculated and characteristic Japanese treachery was employed. The Japanese envoys, Nomura and Kurusu, there in Washington, were ordered to prolong their mission in the United States in order to keep conversations going while the surprise attack was being prepared – an attack which was to be delivered before any declaration of war. The President, you will remember, on Sunday had made an appeal to the Emperor of Japan, reminding him of the ancient friendship between the United States and Japan, by which Japan has greatly benefited, and impressing upon him the importance of preserving the peace in the Pacific. The attack upon the United States ships in Pearl Harbor, thousands of miles away from Japan, was the base and brutal reply.

No one can doubt that every effort to bring about a peaceful solution was made by the Government of the United States. We have all seen the immense patience and composure which they have shown in the face of the growing Japanese menace. But now all that is over. And now that the issue is joined in a most direct manner, it only remains for the two great Democracies to face their task with whatever strength God may give them.

We must hold ourselves very fortunate, and I think we may say that our affairs have not been ill-guided, when we reflect that in all our period of weakness after Dunkirk we were not attacked alone – while we were alone – by Japan – or indeed at any time in 1940, before the United States had fully realised the dangers which threatened the whole world. In all that period we were in very great danger of having an attack made upon us in the Far East to which we could not have made any adequate resistance. But so precarious and narrow was the margin upon which we then lived, that we did not dare express the sympathy which we have all along felt for the heroic people of China. We were even forced for a short time in the Summer of 1940 to agree to the closing of the Burma Road by which they get their supplies. We had to bow for the time to the force of the hurricane. But later, as time passed, at the beginning of this year – as soon as we had regathered our strength after the Battle of Britain had been won – we reversed that policy, and the House will remember that both I and the Foreign Secretary have felt able to make increasingly outspoken declarations of friendship.

When I said this in the House this afternoon, there was general assent that we have moved steadily forward, as our strength has grown, in our declarations of friendship to the Chinese people and their great leader, General Chiang Kai-shek.

We have always been friends with the Chinese since the beginning of this vile outrage upon them more than four years ago, and last night I cabled to Generalissimo Chiang Kai-shek, assuring him that henceforward we would face the common foe together.

Although the imperative demands of the war in Europe and in Africa have strained our resources, vast and growing though they be, you and all the Empire will notice that some of the finest ships in the Royal Navy have reached their stations in the Far East at a very convenient moment. Every preparation in our power has been made, every preparation which our resources allowed – and you must not forget the many calls upon us – has been made. And I do not doubt that wherever we are attacked we shall give a good account of ourselves.

The closest accord has been established with the powerful American naval and air forces, as also with the strong, efficient forces belonging to the Royal Netherlands Government in the Netherlands East Indies. All this has been arranged. We have our great preoccupations here in Europe, but at the same time everything that our resources, everything that forethought can do, has been done to prepare for this long threatened storm in the Far East which has now broken upon us and on our friends across the Atlantic Ocean.

When we think of the insane ambition and insatiable appetite, which have caused this vast, melancholy extension of the war, we can only feel that Hitler’s madness has infected the Japanese minds and that the root of the evil and its branch must be extirpated together.

My friends, let me say this. It is of the highest importance that there should be no underrating of the gravity of the new dangers we have to meet, either here in this Island, or those dangers which the United States have to meet. The enemy has attacked with an audacity which may spring from recklessness, but which may also spring from a conviction of strength.

One thing is certain: The need for greater effort in munitions production. That must impress itself upon every mind tonight. It is quite certain that some of the supplies on which we had counted, which had been diverted to Russia, will have to be made good by us. It may well be that in the next few months we shall have a gap to fill. It is particularly necessary that all munition workers, all those who are engaged in war industries, should make a further effort proportionate to the magnitude of the perils and to the magnitude of our cause. Particularly does this apply to tanks, and above all to aircraft – aircraft will be more than ever necessary now that the war has spread over so many wide spaces of the earth. I appeal to all those in the factories to do their utmost to make sure that we make an extra contribution to the general resources of the great alliance of free peoples, which has been hammered and forged into strength under and amidst the fires of war.

The ordeal to which the English-speaking world and our heroic Russian Allies are being exposed will certainly be hard, especially at the outset, and it will probably be long. But when we look around us, upon the sombre panorama of the world, we have no reason to doubt the justice of our cause, nor have we any reason to doubt that our strength and our willpower will be sufficient to sustain it.