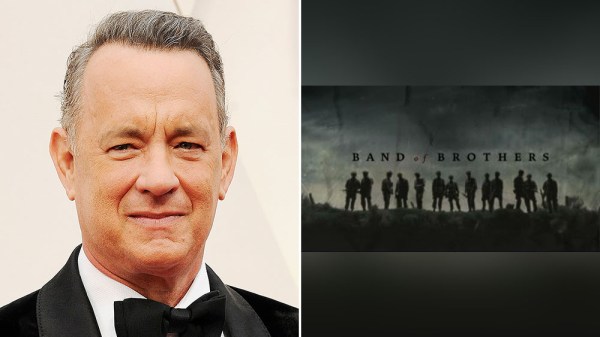 EXCLUSIVE: “Anybody seeing this for the first time will be saying, alright, tale away the amount of celebration of nostalgia, this is an examination of the human condition” says Tom Hanks of the se…

I will probably listen to this. Thought you might be interested. Didn’t see a for sure date

Anyone else here remember watching it when it initially aired? Watching it only months after losing my grandfather, a WWII vet, it was heartfelt, terrifying, bittersweet and somewhat surreal.

It was one of the best series I have ever seen and so many scenes brought me to tears. The only other world war 2 series to ever touch me the same was world at war. I saw that as a kid and was mesmerized by the history.

As a kid, watching World at War surprised me, especially when Jimmy Stewart himself was interviewed. “Is that George Bailey, Grandpa?”

Yes he was awesome and it really changed his life in some very hard ways. But the scenes from the concentration camps, you can’t forget .

If we legally can, we should stream band of brothers and the pacific on the movie days.

It was particularly surreal when you remember that you have actually met some of these very men.

Yes I know some of you have met many of these heroes. I am sure it was a memorable experience for you.

I hope The Pacific gets more attention, if you ask me.

Which made the show all the more surreal. Many of them are gone now…

It got overlooked for sure. I think the German series on the Russian war might be good to stream too. I wouldn’t even mind getting together to stream world at war. Might be a bit dated but it was very well done.

Sadly not many of any of them left. The greatest generation is going home.

We’re not at the point of, say, WWI vets in the early 2000s yet. Another 10 years and you’ll get there. And here’s something to at least ponder over: We probably have more WWII veterans alive now than Civil War veterans in the same time period of 75-80 years.

Probably true. But treasure the ones you know. They gave a lot for us.

I lost my personal connection to that generation 20 years ago this past March, but I still remember ol’ Gramps for being one of the best influences of my life. A sort of secondary father figure, in a way.

My Dad was in the Navy in late 44 to 45 but never got near combat. I had a great uncle who was at Belleau Wood. I always wished I could have talked to him about it.

Also my dad’s sister second husband…tenuous connection I know had served in the South Pacific as an AA gunner under MacArthur. I was too young to really appreciate him but he was amazing to listen to.

The war never had a particularly bad effect on my grandfather, despite him having seen combat in Europe from 44-45 and even participating in the liberation of Ohrdruf (unlike my father in Korea who took years to recover mentally). He even met with some family members of soldiers he killed, one he even tried to take “a special souvenir” from.

My dad did college in 2 years then went into the Navy. He was in Radar and Radio school at Great Lakes Naval Station when the war ended.

He saw a lot. Many men handled it. Sadly many had issues. I mean your Grandfather.