All day America’s young manhood is marching. They’re a little out of step, but not for long.

Zero hour moves westward with the sun and 16,404,000 strong they register for national service.

Democracy is your cause – the cause of youth.

7 a.m. and they are lined up and waiting in the East. Another hour, another time zone, and the Mississippi Valley is offering up its youth. Through the Mountain States the zero hour is moving, up and over and down the Pacific slope.

The machinery of national Selective Service is spinning coast-to-coast, Gulf-to-Canada. The world around us is on fire.

This is the traditional American muster done to greater scale. But the muster, all the same, that enabled western pioneers to hold the plains states and the New Englanders before them to meet the Indian’s charge. America is mobilizing for defense. The President emphasized that.

Here they come, there they go – a million or more an hour for the national army of defense – all males, 21 to 36 years old inclusive.

All males – that is the way of democracy. The high and low, rich and poor, good and bad. The Rockefeller boys and the sons of their older servants. Bobby Feller signs on with a shotgun in the crook of his arm. Bobby’s going hunting and if the draft gets him, okay. Tough, though, for the Cleveland ball club.

October 16, 1940 – America at peace registers its young manpower for compulsory military service. It is happening here.

comparatively few exempt because of their membership in or association with the armed services or who are on an otherwise strictly limited essential list.

There are 11 questions and the man gets a card. His card later gets a number and some 900,000 of those numbers will call for guns. There are about 3,280,000 of those young men who are on the march today who will be fit and available – no dependents, no essential job. The first 900,000 are among them somewhere as they come today from field and factory, cities and towns.

7 a.m. in the East. The nation’s greatest city puts 1,107,000 of its young men on the registration line. Town halls and fire houses are open in New England. They are giving their names – addresses – ages – in school houses in New York. The Atlantic Seaboard is signing up and this first segment of the registration extends instantaneously south and westward to the flatlands of Indiana.

The nation’s greatest peacetime army is being born and no one knows whether he or the next man will be in it. “Today’s the day,” they say.

There are little blobs of dissent. A teacher here, a parson there cannot reconcile conscience to assist the draft. Some young students – so young – feel that they cannot conscientiously give their names despite assured deferment.

17 hours overall and the job will be done.

7 a.m. to 9 p.m. is the span and the Pacific Coast will be marching for three hours after all is finished in the East.

Military service is the destination of the fit. Intelligent leadership, comfortable clothing, good food and adequate arms is the government’s part of the bargain. Acceptance of a fundamental obligation of citizenship is the registrant’s contribution.

America stands at the crossroads of its destiny.

The method is fair, it is sure, it is democratic – it is the will of people.

’Not for War,’ Willkie Says

Wendell L. Willkie talks, too. That was last night but they may read today, and he tells them.

To every man in the course of his life come a few – a very few – impressively solemn moments. Such a moment comes when a man outs his life at the service of his country.

This is not for war, we must avoid it if we can.

What I would ask of you is that you form yourselves into an army – the best and most efficient army on earth.

Johnny, get your gun!

Here in America we still have freedom. It is here and here alone. And if we do not guard it – with our lives if necessary – it will perish from the earth.

No dispute at the top over this registration. Both of those men are for it.

At 7 a.m. from fields and factories, from penthouses and hobo jungles, from shanty-towns and the halls of Congress came the vanguard of men who must register before 9 p.m. The first step in building up over the next five years a reservoir of nearly five million trained men.

They started answering 11 pertinent questions put to them by more than a million volunteer workers in 125,000 registration places scattered throughout the country.

With a few specific exceptions, the Registration Law touched every draft-age man in the country – rich and poor; movie star and WPA worker; white, black and yellow; citizen and alien; minister, priest and rabbi; the sound of body and the lame, the halt and the blind.

Only ones exempt from registration were members of the armed forces, the Reserves, Public Health Service, Coast Guard, Coast and Geodetic Survey employees and members of the diplomatic corps.

R-Day was not proclaimed a national holiday. In most states, however, school holidays were declared. Employers were asked to see that their employees not only know that they must register, but that they be given sufficient time off to do so. The government set an example by giving all employees three and a half hours off – without loss of pay or annual leave.

No delay in registering was anticipated except in the most crowded metropolitan areas. The average of paper work was 16.5 registrants for each registrar for the 14-hour day. An average of 20 minutes to fill out each card was anticipated, but officials said that an intelligent registrar could register an equally apt registrant in about five minutes.

All registrants were warned to insist upon a registration certificate. Officials throughout the country were expected to start demanding a show of the registration card by every person of draft age at every opportunity.

The registration card, which will be filled out and kept by the registrars, will be sent to the local draft boards which will shuffle them like a deck of cards, number them from the top and assign each a “serial number.” The number will be used by national headquarters in the lottery to determine the order in which registrants shall be classified for military service.

Each local board will prepare and post in a public place a master sheet of registrants. It will carry the name and address of each registrant and his registration serial number.

Selective Service officials predicted that the lottery would be held between October 26 and November 2 with October 29 as the most probably date.

The conscription law was introduced last June. The Administration did not endorse the bill officially until August, when Mr. Roosevelt urged haste in its passage. By that time, Congress had authorized cast sums for mechanical preparedness and the President pointed out the need of trained men for those machines.

Even with passage, the machinery was set up gradually. Only last Monday did Mr. Roosevelt nominate Clarence A. Dykstra, president of the University of Wisconsin, to the $10,000 a year post of director. The nomination was confirmed yesterday.

YOU’LL NEVER GET RICH! — By Ficklen 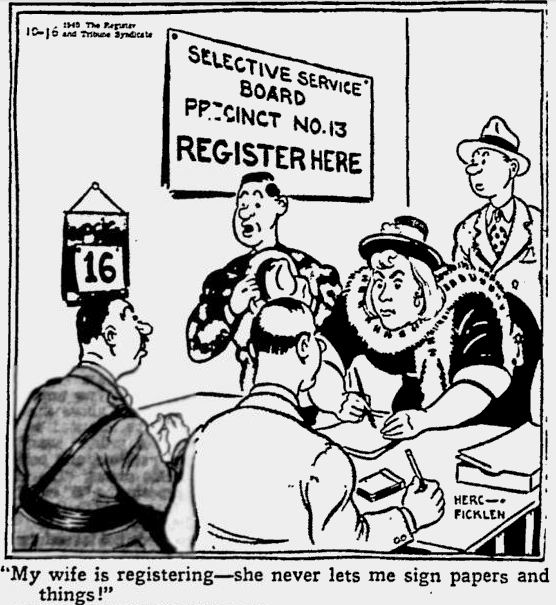 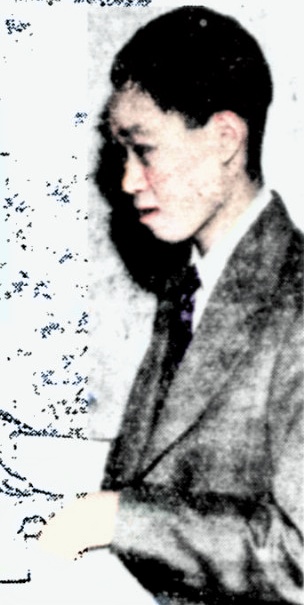 Charles C. Lee, of 510 Third Ave., a Chinese young man who is a freshman at the University of Pittsburgh, thought he was eligible for the draft because according to his Chinese method of reckoning, his age was 21.

He reported today at the registration bureau in the City County Building and told William E. Alton that he wasn’t exactly sure what his age was according to the American calendar.

Mr. Alton was confused about the situation itself, so he called on a friend, George C. Lee, 34, a Chinese merchant of 516 Third Ave., to see if he could solve a problem.

George Lee produced a Chinese-American calendar published by the United States Department of Labor for just such dilemmas.

After considerable calculation, he ascertained that Charles Lee is 19 according to the American calendar and consequently won’t have to register.

The explanation George Lee offered is this. In China, everyone has the same birthday, New Year’s Day. A boy born in December is one year old at birth, but when the new year rolls round a few weeks later, he becomes two years old.

Thus, Charles Lee, according to American reckoning, will be 20 on December 5, 1940, but according to the Chinese calendar, he became 21 January 1, 1940, and he thought that made him old enough to register.

We hope it’s to keep out, not to get in. That was the original idea. But we have been straying toward war. And now we have galloping. So let’s not delude ourselves, on this day when 16,000,000 Americans step to the schoolhouses and the polling places to register in the selective draft.

When Congress was considering conscription, and billions for rearmament, this newspaper joined with a majority of Americans in supporting those measures, believing that they were necessary for defense, and that by making ourselves strong we could keep war from our shores. That was the argument the administration used in rallying public opinion to its program. We still believe that the measures were and are necessary.

But can anyone today still have complete confidence that our nation will avoid involvement? We think not. World events are moving too rapidly. Some of these are beyond our nation’s control. Others are flowing from our own national policy, which appears to be no longer aimed at the sole objective of becoming strong and staying out.

This day when America’s young and fit place themselves on record as being available for military service is a good day for all of us to rededicate ourselves to the original concept that this great national effort is – and must continue to be – preparedness for defense, not war.

Let us ask of our leaders in Washington, and of those who aspire to become our leaders, that they read, re-read and take to their hearts one sentence out of Col. Lindbergh’s latest address.

When a man is drafted to serve in the armed forces of our country he has the right to know that his government has the independent destiny of America as it subjective, and that he will not be sent to fight in the wars of a foreign land.