MAN IS LYNCHED BY FLORIDA MOB

Quincy, Fla., May 13 (AP) –
A 22-year-old Negro arrested for attempted assault upon a 12-year-old white girl, his body riddled by bullets from two lynching efforts of a masked band, was found dead shortly after daybreak today on a creek bridge north of here. The lynching stirred a state investigation.

Four masked men, armed with guns, took A. C. Williams, the Negro, from the county jail Monday after compelling officer Dan Davis to open the cell doors. Last midnight, the Negro, wounded severely by pistol bullets and blows on the head, was found at a Negro house near here by Sheriff M. P. Luten and others.

They placed him in an ambulance for transfer to a Tallahassee hospital, 25 miles away. Five miles from Quincy, a masked band stopped the unguarded ambulance and removed the Negro. His body was found some five hours later.

Quincy, Fla., May 13 –
Sheriff M. P. Luten said today “five or six” white men had lynched A. C. Williams, a Negro accused of attempted criminal assault on a 12-year-old white girl. The Negro was suffering from wounds and a beating administered Sunday night when he was again abducted and killed.

New York –
According to the newspaper accounts, the lynching of a Negro in a little town in northwestern Florida a few nights ago was an episode which, for bestiality, could be matched only in cultural exercises of the super-race of Adolf Hitler.

Suspected but not yet formally accused of criminal assault on a white child, the victim was roped to a tree, shot and left for dead, but crawled to a refuge and there was recaptured by a law officer. He then apparently was surrendered without a struggle to a mob which finished him off.

The section of the country in which this horror occurred is in the social and intellectual slum which, according to the hearsay historians of Florida, was populated by low whites who fled from the other southern states, notably Georgia and Alabama, to escape service in the Civil War, and the white population is distinguished from the Negroes only in the matter of complexion and other racial characteristics.

It should be easy to catch and convict all the murderers, but any serious attempt to do so probably would result in either local revolution or such a farce as would further discredit the law and civilization.

Many areas of Florida are civilized only in a few outward appearances, for the state still consists largely of frontier and backwoods, and we deceive ourselves by imagining that frontiersmen and backwoodsmen are all brave, chivalrous characters.

The robbers and killers of the old West, glamorized on song and story out of all resemblance to their deceased and dirty criminal character, were, in fact, no better than the common city gunman or the backwoods lyncher of today.

Florida is an adolescent, irresponsible and thus, incorrigible state whose most respected political and civic leaders in the urban areas have frankly insisted that it is necessary, in the interests of progress and prosperity, to connive at crime and build on vice and official corruption.

Knowing, for example, that a gambling house cannot operate openly without the corrupt consent of the local officials, many of these leaders hold, nevertheless, that if gambling were put down, the tourists would go elsewhere and business would suffer.

In the crude back country, the conditions of life are primitive, and habitations may be seen from the highway in which there are neither panes nor screens to the windows, and creatures having the physical appearances of human beings live in such squalor as to revolt the very buzzards.

It is not to scold the people or the state that such observations are made, but rather to indicate how it can be that white men, claiming to be members of a superior breed, can so degrade themselves and embarrass the race in which they hold technical membership in an effort to impress their superiority on their Negro neighbors.

Only two years ago, in one of the oldest and most sedate cities of the coast, a community where wealth abounds and books have been reported, a Negro taximan ran down a white child in a traffic accident and was taken from the hands of the law by relatives of the deceased and shot under the law of flight in the presence of a little party of shocked and frightened touirists.

This was duly listed as a lynching in the annual score, whereas it was plainly a common, premeditated murder which could have been punished by the death penalty if the morality and the public opinion had existed.

There is never any reason or excuse for the lynching of a Negro in Flrida, and it must be added that the worse the crime, the less the white man need concern himself about a miscarriage of justice.

In the most recent case, the prisoner would have got his promptly and in full measure had the law been allowed to take its course, but the killers doubtless were afraid that on his trial, the accused might prove his innocence or, import from the North some lawyer who would demonstrate that the victim tempted him and, anyway, that he wasn’t in the State of Florida at the time but studying in class at the College of the City of New York.

Civilization can’t be hurried in the Florida swamps and backwoods, on either the whites or the Negroes. Each degrades the other, but the white man has moments when he can really show the Negro a very recognizable stump of the tail by which his not-so-remote ancestors swung from tangled vines amid the stunted trees.

2 Likes
Spartacus, this question has been a deep one. Why did the Allies, especially America, did not do anything to combat racism in their armies?
Chewbacca May 18, 2020, 10:54pm #4

Thanks for posting this wealth of information.

New York –
According to the newspaper accounts, the lynching of a Negro in a little town in northwestern Florida a few nights ago was an episode which, for bestiality, could be matched only in cultural exercises of the super-race of Adolf Hitler.

I find this comparison very striking in the sence that the Nazi’s did set bar on how not to do things. I wonder (don’t know much about this subject) how the Nazi Germany in that sense did influence race relations in the U.S. before its entry into the war.

I wonder (don’t know much about this subject) how the Nazi Germany in that sense did influence race relations in the U.S. before its entry into the war.

The Bund was the closest they got: 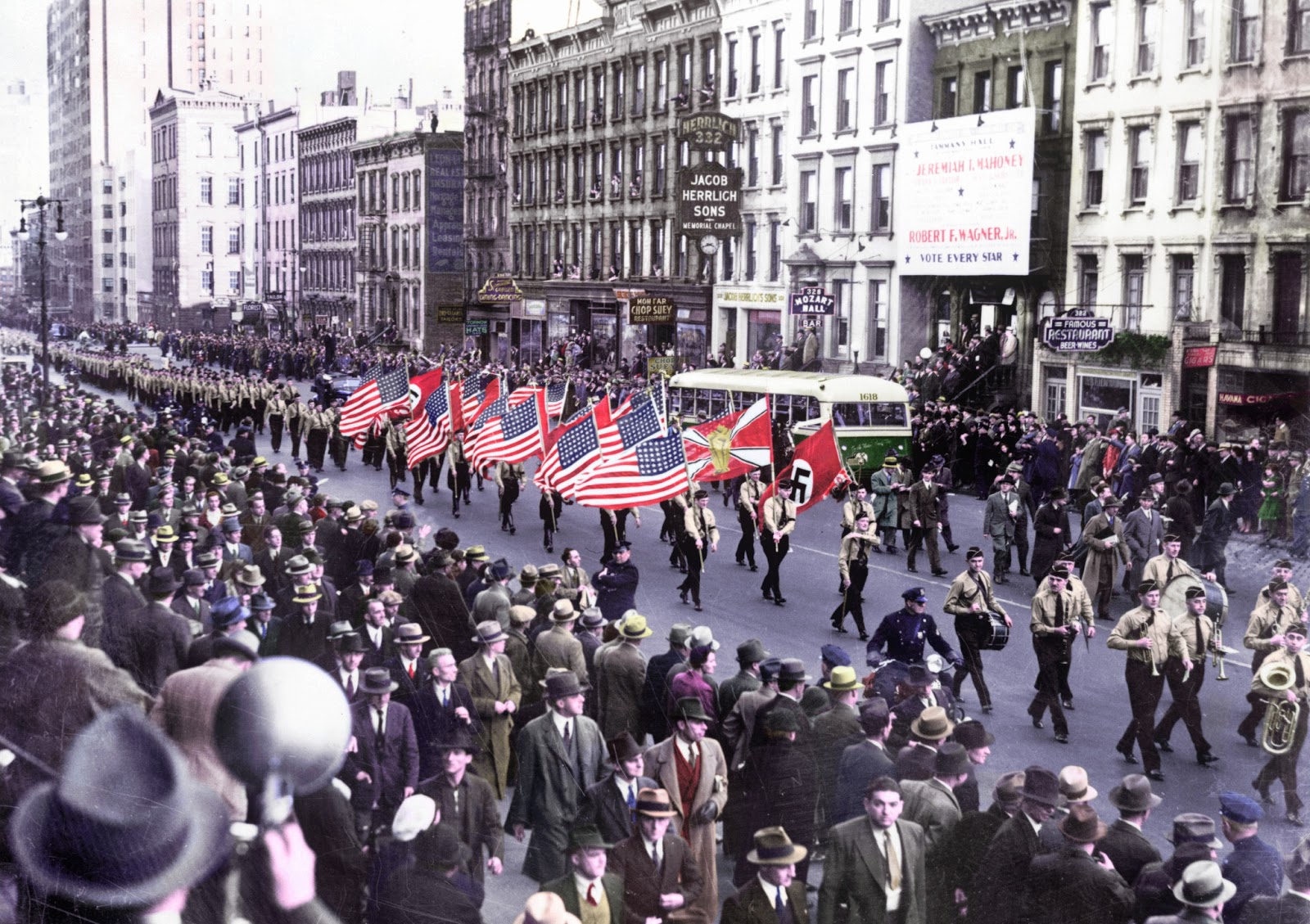 Somehow the Blues Brothers spring to mind when seeing pictures of this scum. (yep: I am being judgmental here > : - )

I thought so as well, only replace Illinois with New York or New Jersey. The German-Americans of these two states are not proud at all of this.

Well I guess every country has its share of haters, all other European countries had National Socialists as well at the time. Like real believers, not just people who joined the party for just having a unifom with stripes or power over others. There are always people who do literally ANYTHING for power.

Luckily the overwhelming majority is still down with the Blues Brothers. Here for the people who don’t know this fantastic flick. (This is not an endorsement for violence or risking damage to Dodge cars).

At least they weren’t the Pintos