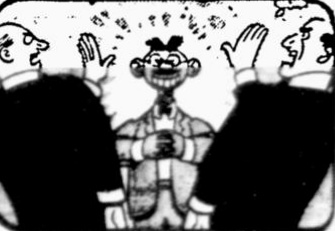 When the time comes to vote for the “Man of the Year,” I’m going to have to cast nine ballots.

That’s how many candidates I have. Each is a governor. I don’t know their names, but they are the governors who protested having Jap aliens “dumped,” as they put it, in their states.

Those protests make them standout citizens in my book. That’s patriotism – the real stuff. That’s cooperation in time of danger – right up to the hilt. That’s protection of State’s Rights – 100% – 200%.

You can bet all you want that the governors did not speak for the people they represent.

Those protests were the voices from the backrooms in the executive mansion where the cute work, the sly political work goes on.

That’s a grandstand play for votes, but it is going to backfire. Americans aren’t going to stand for such an attitude for governors of states which have the room to take care of the thousands of Japs who swarm all over the most important American theater of war and war production.

Naturally, no state would beg for the Japs. They aren’t going to improve any place they are removed to. But, with this country’s back to the wall, the governors must be willing to pitch in and help.

When I was on the Coast and whacked the Japanese over the head, I’ll bet I had hundreds of letters saying that I was a scoundrel of the first water; that I was an inciter of hatred, a needless stirrer-up of trouble.

None of these letters was from California. People there wrote in by the thousands to say I was telling the truth. They have known all along what the Japs were doing, and have been doing, for 20 years.

Now, thanks to District Attorney Dockweiler of Los Angeles, everybody knows what the sawed-off little cusses of Nippon have been up to the District Attorney, in case you missed the story, had a map made showing Jap landholding in and about the Los Angeles area. The little bums are everywhere. They own land near every railway line in Los Angeles County, the Douglas, Lockheed and Vultee aircraft factories, the major reservoir in that district, and practically all of the oil wells and refineries.

Accidental, of course. Either that or sacrifice on the part of the jaundice-colored little fellows. Who knows but what they bought the less fertile land near strategic war centers in order that Americans might have the richer soil that lay elsewhere?

The thing to do with these almond-eyed brethren and sistren is to herd 'em up and lead them, none too gently, to inland states where the acreage is so plentiful that if they wander off, mischief bent, they are likely to wind up decorating the landscape, along with the skulls of lost cattle.

But apparently this isn’t going to be done. The latest word from the Pacific Coast Alien Control Coordinator said that Hirohito’s henchmen would be kept inside California. Why, I don’t know.

Could it be because the nine governors have protested against marring the Chamber of Commerce beauty of their states by moving in a few thousand Japs? Probably.

That’s why I want nine ballots when the time comes to choose the “Man of the Year.”

Such a love of country must not go unrewarded, even if a man has to stuff the ballot box.