Still fighting for the same cause 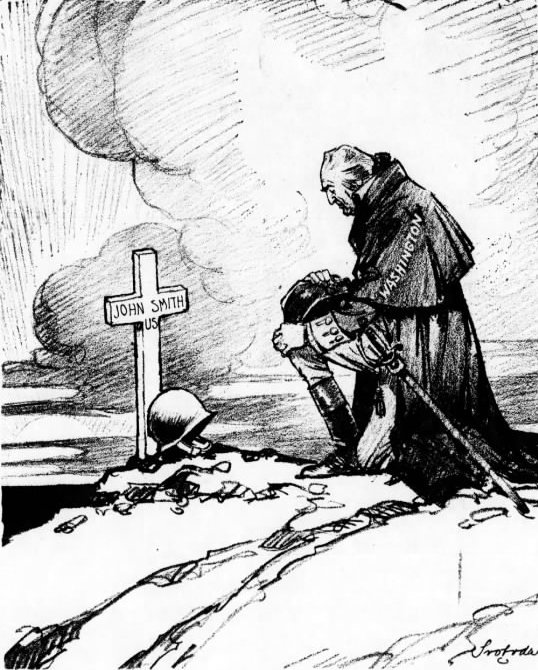 America has furnished to the world the character of Washington. And if our American institutions had done nothing else, that alone would have entitled them to the respect of mankind.

Today the reasons for Washington’s greatness are not obscure. He may not have brought to the revolutionary cause the turbulent spirit of a Samuel Adams; he may have been less distinguished as a statesman than Thomas Jefferson; his military generalship may not have been as brilliant as that of Robert E. Lee. But no American in our history as a nation has brought to a crisis qualities of character and courage surpassing those of Washington.

It is inspiring to Americans in this time of great emergency to picture Washington at many points of his career – as a young soldier in Braddock’s Expedition, as a farmer who loved the land, as commander of the armies of the Continental Congress, leading what often appeared a forlorn hope, as the first President, riding to New York for his inauguration, as a tired old man, badgered on all sides by his enemies and longing for the peace of Mount Vernon.

At all times the selfless character of Washington shone luminously, but never so impressively at at Valley Forge. It was here, and not at Trenton or Princeton or even Yorktown, that Washington won his greatest victory. It was won against a captious and meddling Congress too weak to help him. It was won against the conspirators among his own generals, the traitors and the deserters, the men of little faith who were ready to quit. It was won over his own spirit, which was hard pressed by despair.

This was not a victory of generalship, of intellect or of resourcefulness. It was a victory achieved through force of character – character which symbolized perfectly the spirit of the men who fought and bled and starved and froze for the establishment of a nation which again witnesses dark hours.

That victory of the spirit must be won again by Americans who, until recently, had come to take their country for granted, assuming that it would always be secure in its freedom, always isolated from the danger of aggression. If that victory is to be won, all Americans must emulate that courage of the soul that was Washington’s sword and shield.