My question today is how did American troops react to dealing being assigned with nations (like the British Commonwealth) that had marginally more lenient racial laws and customs than they did? I’ve read a number of stories about how this was a contentious issue in many cases. One example is that apparently an American unit based in the UK wanted a local pub to implement a colour code because they catered to both blacks and whites. They got their wish, only for the Pub to display a sign saying “Coloured Only”. Haha. This is one of the more light hearted stories, but they could apparently could get quite tense. If anyone has any stories or examples to share, please do!

You mean this incident? The Battle of Bamber Bridge was an outbreak of racial violence between black and white American servicemen stationed in the British village of Bamber Bridge, Lancashire in June 1943. The incident, which occurred a few days after the 1943 Detroit race riot, was started when white Military Police (MPs) attempted to arrest several African American soldiers from the racially segregated 1511th Quartermaster Truck Regiment at the Ye Olde Hob Inn public house in Bamber Bridge. After the arrival of m...

Once again, like with my Racism in the U.S. Army post, JD helped me out here as well.

Even this article wrote more on it, though it is also guilty of emotional language to rile you up:

The American race riot that kicked off in a Lancashire town.

It’s not nearly as cute and cheeky as implied.

Remove the racial elements and what you have here is a story of undisciplined drunken soldiers who disobeyed orders, assaulted MPs, and then took up arms against the military authority. This isn’t “stunning or brave.”

Any historian worth their salt would at minimum read the reports and paperwork from the courts-martial instead of relying upon Wikipedia (or certain historians whose only intentions are to intentionally rile you up at past events).

This is what playing telephone with history gets you.

Quoting from that article above:

On the night of June 24, several American troops of the 1511th were taking the pamphlet as gospel and drinking with the locals of Bamber Bridge at the Ye Olde Hob Inn, which still stands on Church Road. Two passing MPs were alerted after soldiers inside the pub attempted to buy beer after last orders had been called. They attempted to arrest Private Eugene Nunn for a minor uniform offence and an argument broke out with the military police on one side and the African American troops, with locals, on the other.

No source on who asked the pubs to segregate, might have been some Pfc. for all we know (and this seems to be more of a precautionary thing after the Detroit riots which I will cover next year in my thread

The MPs didn’t seek out the confrontation, they were alerted to it. And, instead of going along and taking some slaps, Pvt. Nunn (and a bunch of drunk soldiers and Brits who really had no place considering it’s a military matter) fought back.

Things began to escalate when Private Lynn M. Adams brandished a bottle at the MPs causing one of them, Roy A. Windsor, to draw his gun. A staff sergeant was able to diffuse the situation but as the MPs drove away, Adams hurled a bottle at their jeep.

The MPs picked up two more of their number before intercepting the black soldiers, who were now at Station Road, making their way back to base.

What happened next was a source of contention but it lead to Private Nunn punching an MP causing a violent melee to break out. An MP fired his handgun, hitting Adams in the neck. Rumors spread like wildfire there after, much like the Detroit riots, causing the soldiers to arm themselves against the MPs, for fear that they were targeting black soldiers.

By midnight several jeep loads of MPs had arrived with an armored car, fitted with a machine gun. British officers claimed that the MPs then ambushed the soldiers and a fire fight began in the night.

Troops warned locals to stay in doors as they exchanged gun fire but the darkness ensured that the fighting had quelled by 4am and that there were few casualties.

One soldier, Private William Crossland, was killed whilst seven others were wounded.

A picture from the court-martial: 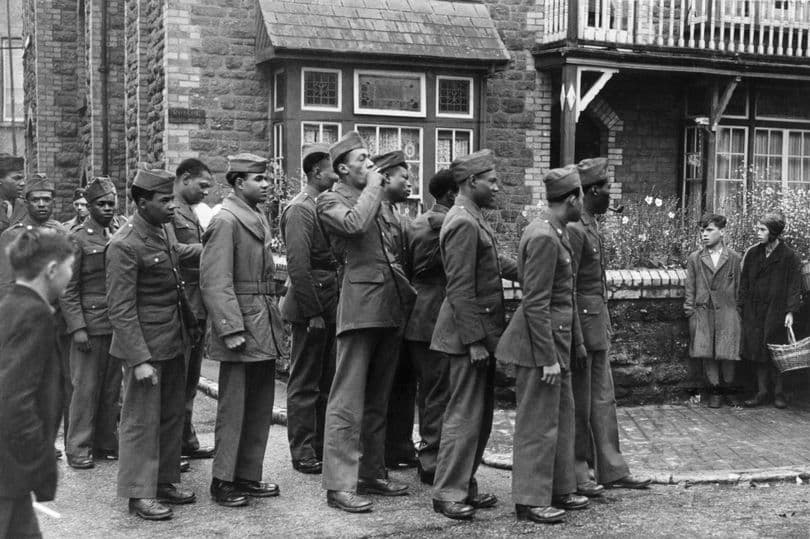 There seems to be this questionable refusal to understand the culture and organization of a military unit, and how such actions cannot be tolerated and how the blacks involved were just as much agitators as they were victims (and this refusal still haunts academia today).

This is where they do dumb shit like “obviously racist MPs, did you know that most of the arrests they made were BLACK PEOPLE!!!” (from a unit they were policing that was mostly black…wow…amazeballs)

Or the fact they don’t understand that MP units are separate units. So for the MP units to be “mostly whites” in the days of segregated service is not at all shocking. This begs the question, what did the MPs do that they wouldn’t have done to white troops acting the same?

So that was the real story. Were there racial elements? Sure. Was that the entire story, or even the meat of it? No, not even close.

The main issue with this obsession over segregation in the past among historians is that it takes small incidents and makes them the rule. I’ve criticized TG for this before (see link below for that). It may have happened once (with or without evidence), then they extend it to presume it was a widespread problem that existed everywhere.

There were issues. The question should be: how many issues were there out of all the units and troops deployed?

I’ve linked this interview from Ted Lumpkin Jr., of the Tuskegee Airmen. When asked about his experience in the military as relates to his race, he said, to paraphrase, “nah, there was nothing bad. It was a good experience.”

…which, you could tell, grossly disappointed the interviewer who obviously wanted some story about how he was “oppressed by bad whitey.”

Please make sure to check this out:

There, on the front lines, these colored units are rarer than you might think. You see, 80% of all black servicemen will never leave the United States. Partly because other members of the United Nations, such as Australia, request the U.S. to not send too many people of color to not upset the white population. So, what he said about Australia isn’t untrue. The Australian government, in Dec. 1941, asked that the U.S. not send blacks. The U.S. basically responded with, “Screw you, we’ll send wh…

Britain wasn’t so pure as portrayed, nor were other nations. In Canada at this time the largest Black community by far was in Nova Scotia; they were descendants of escaped slaves from the American Revolution and War of 1812. Nova Scotia had a widespread ‘colour bar’ aka segregation until the 1960’s.

In almost every nation the racism was far more overt than is typical today. The Indian Army was defacto segregated with predominantly white officers.

This will change but not until after the war.