Sabotage? Stalin is gonna shoot someone.

Oh it is the US? Damn Trotskyist wreckers have gotten to the US too

Yank planes could have made heavier assault at less cost if based in Caucasus, Simms says
By William Philip Simms, Scripps-Howard foreign editor 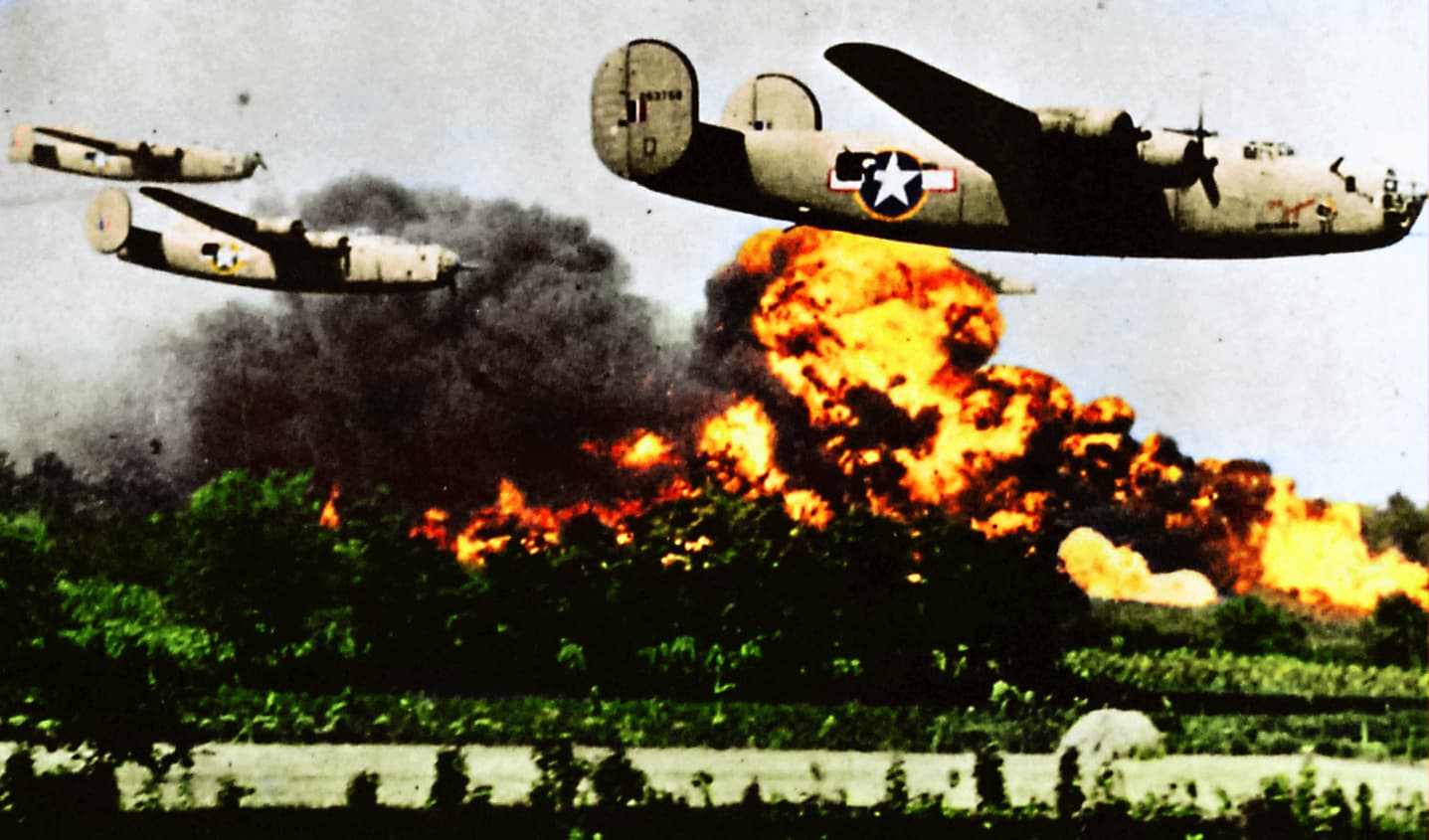 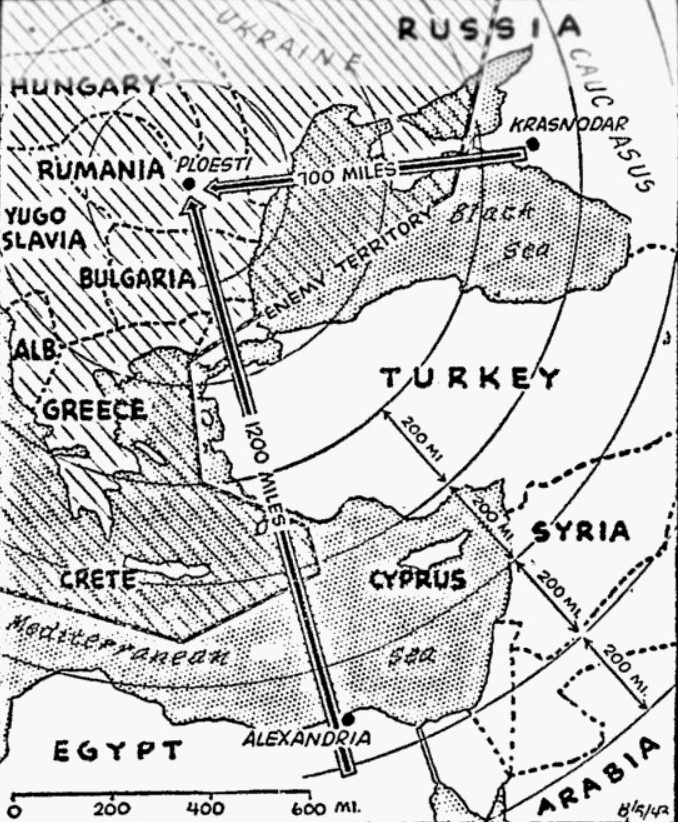 The Ploești oil raid, the first picture of which is shown at top, might have been carried out with much smaller loss to U.S. forces if Russia had permitted out bombers to use their airfields. The map shows how planes based in the Caucasus could have raided Romanian, cutting the distance traveled from Africa almost in half. The radiophoto from the U.S. 9th Air Force shows Liberator bombers flying at treetop height and fires raging in the oil fields.

Washington –
The smashing American air raid on the Ploești oil fields in Romania throws a tragic light on the one-way nature of the collaboration between the Soviet Union and the United States.

Belated reports make it plain that our Liberator bombers simply played havoc throughout the entire oil region. British as well as American sources say it was probably the most telling single bombing job of the war. It may change the whole course of the conflict.

It is equally plain, however, that the raid was costly in lives and planes.

The German news agency reported 67 U.S. bombers were lost in the Ploești raid, but Secretary of War Stimson announced in Washington today that U.S. losses amounted to “20%.” The German figures would have put the losses at 50%.

Had Russia and the United States been on a fully reciprocal basis, competent observers here point out, the raid could have been even more effective and at a fraction of the cost in men and materiel.

Taking off from Egypt, the bombers had to fly 1,200 miles just to reach the target. And the greater part of the distance was over enemy territory. The planes were spotted at least two hours before they reached Ploești. The enemy, therefore, had ample time to prepare a hot reception.

Had the Americans taken off from the Russian Kuban, say from around Krasnodar, the flying distance would have been halved. Not only that, but the flight would have been almost entirely over the Black Sea. The defenders of Ploești would have had at most some 25 minutes warning, because the oil fields are not far from the coast.

Equally important, the same bombers could have carried double the bombload. The 15 bombers said to have been forced down in turkey on the return would have reached home safely had they been based in the Caucasus region instead of near Cairo.

The Allied strategists must have had more than one look at the map of the Balkans and the Middle East. They must have computed the distances from alternative bases to Ploești again and again. If so, they could not have overlooked the advantages of bombing any Romanian objective from the eastern shore of the Black Sea.

Officials here are silent on the subject. But it is an open secret that Russia long ago drew a line across the map and, in effect, said to her Allies:

Now you stay on your side of that line.

For some reason or other, Marshal Stalin appears to be unalterably opposed to British or American troops fighting side by side with the Red Army.

Hopes Crowley will not change policy and personnel at every suggestion

London, England (UP) –
The Italian Stefani Agency reported from Bucharest today that 101 U.S. airmen, killed in the raid on the Ploești oil fields in Romania Sunday, were buried with military honors yesterday at Ploești.

The majority were burned beyond recognition and identification was impossible, the dispatch said. A Protestant clergyman conducted services and German and Romanian Armed Forces rendered military honors.

Istanbul, Turkey – (Aug. 3, delayed)
Four of the U.S. Liberator bombers which raided Ploești Sunday made forced landings at İzmir in western Turkey, three others came down at Chourla and an eighth landed at Fethiye. Some of the airmen who landed at Fethiye were wounded.

Editorial: Over by Christmas?

Somewhere in Sicily, Italy – (by wireless)
Some more shipboard sketches:

Joe Talbot: He is an aviation ordnanceman first class, and since there is no aviation aboard his ship, he is a round peg in a square hole. Of course, that isn’t his fault.

What he actually does is a little bit of everything, when things were normal, and during battle, he is the head of a crew down in a magazine of big shells. He wears headphones, and upon orders he shoots more ammunition up to the gun batteries above.

Joe is a black-haired, straight-shouldered Southerner from Columbus, Georgia. In civil life, he was a photographer on the Columbus Ledger-Inquirer. The last big story he photographed was Eddie Rickenbacker’s crash near Atlanta. Joe has been married four years. His wife works at Woolworth’s store in Columbus.

This is his second time in the Navy. He was in it from 1931 to 1935, and he has been in two years this time. He has no intention of making it a career. He has one great postwar ambition – he says he’s going to do it in the first six months after he gets out. He’s going to buy a cabin cruiser big enough for four, get another couple, and cruise down the Chattahoochee River to the Gulf of Mexico, then up the Suwannee, making photos of the whole thing in color.

Tom Temple: His full name is Thomas Nicholas Temple. His father deliberately put in the middle name so the initials would make TNT. Tom is only 19. He is tall and thin, very grave and analytical. He talks so slowly you think sometimes he’s going to stop altogether. After the war he wants to go to Harvard and then get into the publishing business. Tom’s mother is a high-school teacher at Far Rockaway, Long Island, and writes on the side. She used to write for Story Magazine under the name Jean Temple.

Tom’s father was wounded in the last war. He is now in the big veterans’ hospital at Albuquerque, only a short way from my home.

Tom says when he first came into the Navy, the sailors’ profanity shocked him, but now it rolls off his back like water off a duck. Tom is a seaman second class. He is very sincere and thoughtful and one of my favorites aboard ship.

Joe Ederer: He is a lieutenant commander and chief engineer of the ship, and he was my part-time host while I was aboard, since I did all my writing in his cabin. Furthermore, I ate his candy, smoked his cigarettes, used his paper, and would have read his mail if I could have found it.

Cdr. Ederer has been at sea for more than a quarter of a century. He is out of the Merchant Service, and he indulges in constant pleasant feuds with his Regular Navy friends.

His home is at 2724 Northeast 35th Place, Portland, Oregon. His wife is used to waiting, so his absence is not as hard on her as it is on many wives. They have a 15-year-old boy upon whom the chief engineer dotes. He has two pictures of his family on his shelves.

Cdr. Ederer is one of the few officers who are genuine salts. He is not exactly a Colin Glencannon, but they have many things in common. The commander spent many years on the Orient run and has a personal hatred for the Japs. He has been with his present ship ever since she was commissioned two years ago, and he hopes this part of the war soon gets over so he can get to the Pacific.

Like all sailors he wants someday to get five acres, preferably in the Oregon woods, build a cabin and have a creek running past his door. If he ever did, he’d probably go nuts.