Editorial: This paper wants no subsidy

People who live in Washington are unfortunate – they have to take it as a steady diet, while the visitor merely nibbles and can enjoy the flavor before it grows rancid.

For me, coming to Washington is like stepping into a crowded ladies room, where nose powdering, supporter adjusting, and intimate whispering goes on. The atmosphere is strongly feminine because this is the most gossipy city in the USA. Yet women are not its chief talebearers.

I’ve always believed a man can outdo his wife anytime in the matter of spreading petty rumors; the average male also possesses a talent for half-truth and double-talk and Washington proves it. The ladies, of course, aren’t backward, but if you want to hear plain malicious gossip, talk to the men. In hotel lobbies and restaurants, huddles of them exchange cabalistic symbols. They usually carry briefcases and talk behind their hands in arch-conspirator fashion. Whatever may be the reason, the capital is forever filled with rumors, innuendoes and off-the-record stories. Something besides the air is muggy there.

Truth is the most elusive creature in the city of magnificent distances.

Nevertheless, because all of us are gossipers at heart, Washington remains the most fascinating of all cities. Not because it is the seat of our government and carries the burden of our destiny, but because it is the place where all the delicious, spicy, infectious talk originates.

The House of Representatives is scheduled to consider on Wednesday the repeal of the various acts by which Chinese immigration is barred from the United States. The House Immigration Committee has reported favorably on the proposal, by vote of 8–4.

Various acts now bar Chinese immigrants from the United States. There is the legislation of 1902 which continues in effect indefinitely the earlier legislation which had time limits. The Act of 1892 renewed until 1902 the Act of 1882. This one prohibited naturalization of all Chinese and suspended immigration of Chinese laborers (extended in 1884 to all persons of Chinese descent) for 10 years.

Then there is the general Act of 1924, setting immigration quotas based on the racial stock of the United States as of 1890, which prohibited the immigration of all persons ineligible for naturalization. Finally, there is the Immigration Act of 1917, which drew a zone through Asia from which immigration is barred. The barred zone covers central and western China but not eastern China.

Quota would admit only 105

The Chinese are the only nationality thus barred by name. The Chinese resent this slur, pointing out that if they were not specifically excluded, the Act of 1924 would still allow a quota of only 105 Chinese immigrants annually.

On Oct. 12, President Roosevelt asked Congress to repeal the legislation specifically barring Chinese. He asked at the same time that Chinese nationals already in the United States be made eligible for citizenship.

President Roosevelt did not ask Congress to repeal the legislation which bars other Orientals than Chinese. Many experts on the Far East claim that lowering the immigration bars to Chinese alone would not be enough. These experts insist that the entire Far East resents the assumption of white superiority, and that it is as important to have the good will and cooperation of Hindus, Burmese, Siamese, Javanese, and other brown races, as of the Chinese.

It is pointed out that if Eastern countries are allowed to come under the general immigration system of the 1924 Act, only the minimum of 100 can come in from each country concerned. The present discrimination against the yellow and brown races is being heavily stressed by Japanese propaganda.

The barred zone of the 1917 Act covers all of India, Burma, Indochina, Thailand, and practically all the islands sometimes called Oceania, as well as central and western China. It also covers the territory of the Soviet Union between the Caspian Sea and the western boundary of China, but excludes Iran and most of Arabia. The barred zone was drawn so as to exclude Japan.

The Japanese were excluded by the provision of the 1924 Act which barred immigrants ineligible to citizenship, for earlier acts opened citizenships only to white persons and those of African descent. The flat exclusion of Japanese by the 1924 Act was one factor embittering Japanese-American relations in the last two decades.

It remains to be seen whether President Roosevelt’s move to remove specific immigration restrictions from the Chinese will be followed by the British Commonwealth. Canada barred Chinese as such by an Act of 1923. Australia in 1930 barred natives of Asia, Africa, and the Pacific Islands.

More made available, but reduction in point value is unlikely – supply to rise steadily for several months

Powerful enemy force at Truk refuses to come out to fight

Washington (UP) –
Wendell L. Willkie comes here tomorrow to address Republican legislators and to test Congressional reaction to his proposal for a post-war United Nations council to maintain peace.

He will speak before the Republican “Freshman Club,” an organization of newcomers to Congress. But veteran Republican Senators and Representatives will also be present.

Political observers are saying that it is “Willkie against the field.” There is a Midwestern boomlet centered now in Nebraska for former Governor Harold E. Stassen of Minnesota, presently on active duty with the Navy.

Governor John W. Bricker of Ohio, three times elected to that office, has more than favorite-son backing. But his campaign so far has not seemed to move very rapidly.

There is talk here that Senator Robert A. Taft (R-OH) may get back in the scramble before the last national convention ballot is cast, although he took himself out of the race last December by announcing his support of Governor Bricker.

Gen. Douglas MacArthur has enough nationwide support to keep his name well up in preference polls. Senator Arthur H. Vandenberg (R-MI) has been talking up Gen. MacArthur for months.

But Mr. Willkie is more active than all the rest of them combined so far. His major obstacle is opposition of organization Republicans, including some key Congressional leaders. There is some evidence that he offended Congressional Republicans in last week’s St. Louis speech by saying that a wise labor policy “must not be in the punitive spirit of the Southern Democrats’ Smith-Connally Act.”

That act, aimed primarily at United Mine Workers president John L. Lewis, was sponsored by Southern Democrats but had substantial Republican support as well.

Washington (UP) –
Philadelphia will bid for the 1944 Democratic National Convention at the next annual committee meeting here in January, Senator Joseph F. Guffey (D-PA) announced today.

The intent was set forth in a letter he sent to all Democratic National Committeemen.

Our invitation will be accompanied by a substantial certified check. I am writing you now so that you won’t get committed to some waystation in the meantime.

Philadelphia was the site of the Democratic conclave in 1936, when President Roosevelt was nominated for his second term. The 1940 Democratic meeting was in Chicago, which will probably bid for 1944 also.

Cleveland is the only other city to seek either convention.

Democratic leaders probably will weigh the 1944 choice with an eye to influence in a close-vote state. Pennsylvania fits that category, as it gave Mr. Roosevelt less than half the plurality in 1904 that he had in 1936.

Action taken to bring banks, SWPC into ‘even closer harmony’ 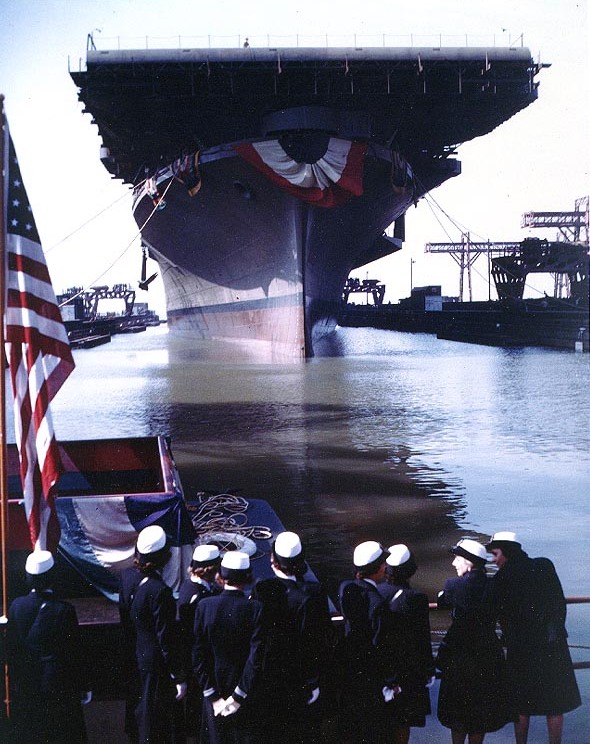 WAVES attend launching of the aircraft carrier USS Franklin at Newport News. They’re watching the ship slide down the ways after the ceremony in which the ship was sponsored by LtCdr. Mildred McAfee, director of the WAVES.

Broadcasts appeal and his wife ‘joins up’
By Si Steinhauser