U.S. 7th Army HQ, Sicily, Italy (UP) – (Aug. 4, delayed)
Lt. Gen. George S. Patton Jr. told the people of Sicily today, through the Palermo newspaper Sicilian Librarta, that the American aim is not to enslave but to liberate.

Gen. Patton promised that Allied arms would ruthlessly destroy military opposition and warned that any “misguided” Sicilians who interfere with telephone communications, with supply lines or with any other American military activity would be dealt with summarily.

He expressed regret that it had been necessary to fight the Italian armies in Sicily. He told any Sicilians who feared the advent of the Americans to look at Africa:

…where we not only have demonstrated no territorial aims, but have done everything to restore normal conditions.

March to victory in Sicily 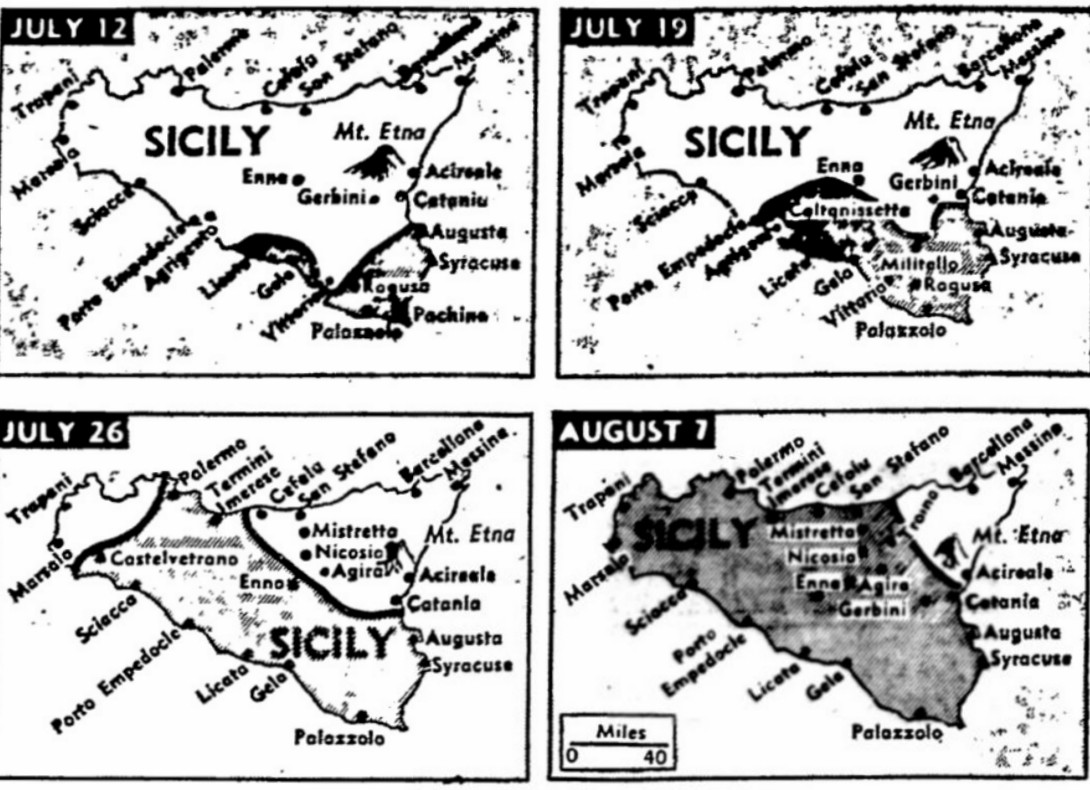 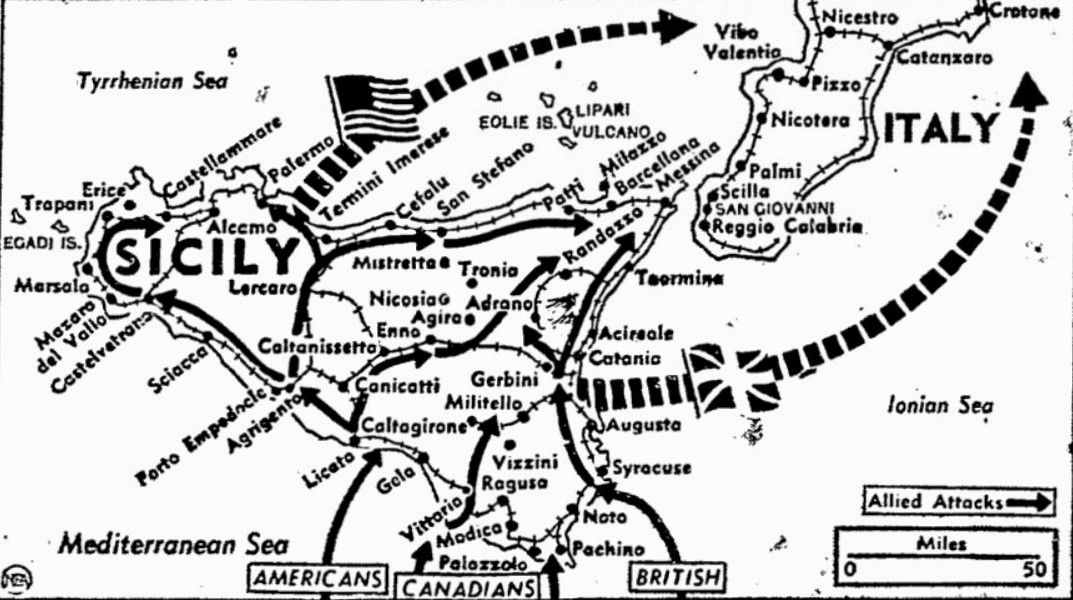 The pattern of attack that gave the Allies almost complete victory in Sicily in slightly over four weeks is shown in the maps above. The top maps show the progress of the Allied occupation after two days of fighting and at intervals thereafter. The attack arrows on the bottom map show the march of the Allied armies from their original beachheads on the southeast coast to the final battles in the northwest corner.

Allied HQ, North Africa – (Aug. 7)
Weary doughboys of the crack U.S. 1st Division have captured the Sicilian mountain stronghold of Troina after the bitterest fighting of the entire campaign and tonight Axis armies were reported falling back from their crumbling Mt. Etna Line toward new positions only 40 miles below Messina.

Troina, important road junction atop a 3,600-foot peak on the central sector, fell Friday morning after a bloody, seven-day battle which, according to United Press correspondent C. R. Cunningham at the front, made the fight for Hill 609 in Tunisia seem like “mere child’s play.”

The Yanks time and again neared the final objective only to be hurled back by fierce counterattacks from a German “suicide force” dug into rugged mountain positions.

Despite the fact many had been fighting steadily for 28 days, the Americans of Maj. Gen. Terry Allen’s famed division kept blasting away and finally took the town which commands roads leading 20 miles northeast to Randazzo, anchor of the new Axis line, and 16 miles southeast of Adrano, on which Canadian and British troops are closing.

Gen. Dwight D. Eisenhower’s headquarters announced that the Italian forces appeared to have withdrawn completely from the Sicilian fighting and that a total of 125,000 prisoners have now been taken in the campaign which entered its fifth week today.

The announcement said the enemy line strung across northeastern Sicily was now reduced to a mere 45 miles compared to the 170-mile line on July 20. That now cramps the Axis into an area of roughly 1,200 square miles which is being kept under ceaseless bombardment from the air and sea.

Far to the west of the fighting lines, U.S. naval and military forces were revealed in a naval communiqué to have occupied the tiny island of Ustica about 40 miles north of Palermo in the Tyrrhenian Sea on Thursday. The garrison of about 100 Italian soldiers and sailors was made prisoner and the Americans found 216 Italian civil prisoners and a guard on the island. All Germans evacuated it on July 11. The civilian population of about 1,100 was destitute and without water and many had malaria.

Ustica is a volcanic island several miles square which Benito Mussolini had used as a place of banishment for political opponents.

As the Allied armies pressed forward toward a final victory in Sicily, warplanes hammered again and again at the enemy’s rear areas, delivering 350 tons of bombs Friday on Messina and battering Naples Thursday night for the fifth time in six days. Warships joined the long-range assault, bombarding the east coast road near Taormina, 34 miles below Messina, to prevent the Axis from escaping along it.

The daily ground communiqué, issued late in the day, reported the 8th Army was continuing to advance on all sections of its front and that the U.S. 7th Army was meeting stiffening resistance in the northern coastal sectors.

The announcement of the Italian withdrawal said that not a single Italian unit was observed anywhere on the Sicilian front Friday.

There were some indications, however, that the Germans were depending on their own troops for rearguard actions, fearful that the Italians, if left to themselves on the front, would go over to the Allied side. The Germans were reported to have three and a half divisions left for the final defense of Messina – the remains of the Hermann Göring, 15th Panzer and 29th Motorized Divisions and about half a division of parachute troops.

The Germans have lost virtually all roadways which once linked their three sectors and are now unable to shift forces as needed to meet increased Allied pressure at any given point.

All three Allied thrusts were within 60 miles of Messina following the fall of Troina as follows:

Thrown back to pass

The capture of Troina, it was said, throws the enemy back to Randazzo Pass between Mt. Etna and the Nebrodi Mountain range just to the north and northwest of Mt. Etna. It also meant the Americans were threatening the juncture point of the Hermann Göring Division and the 15th Panzer Division where they come together west of Mt. Etna.

Headquarters said the German line appeared disjointed at a number of places as the result of Allied air and artillery bombardment. Indications that the Germans were beginning to withdraw was seen in their use, as in the latter stages of the Tunisian campaign, of boobytraps, landmines and timebombs. They have also begun dynamiting bridges to slow the Allied advance, destroying nine if them along the north coast road, where Americans are driving ahead from Caronia.

The British 8th Army was reported approaching Adrano, seven miles northwest of Paternò on the road running along the western slopes of Mt. Etna. With the Americans driving eastward from the Troina sector toward Bronte, 12 miles away on the same road, it appeared a big race was on to see whether the Germans could get up the road to Randazzo or would be cut off at Bronte.

A dispatch from United Press correspondent Ned Russell with the 8th Army said the trap might catch the Germans between the Americans and British, as:

…the Germans appear determined to hold Adrano and Biancavilla, two main points on the road, despite the fact both are commanded by the heights of Centuripe.

On the east coast, another British column was reported in the vicinity of Acireale, only 50 miles south of Messina.

In the air, all types of planes from Flying Fortresses to Warhawk fighters were hurled into all-out bombing and strafing attacks on crowded highways. Eight Allied planes were lost.

Messina, main escape port for Sicily, was kept under almost constant assault by both U.S. and British planes. The road junctions of Badjazzo and Gesso in the northeast were battered by medium bombers and 38 motortrucks were left wrecked in those areas. Adrano was also bombed.

Warhawks and Kittyhawk fighters on Friday hit seven barges and a merchant ship in the Messina area while an air communiqué revealed that in attacks by daylight Thursday 21 barges and four other small Axis vessels were sunk by fighter-bombers.

But more than that needed, WPB chief says

Model rejects his offer –
Latin is seized as spy suspect

Out of the mud –
Pumps put lift to Normandie

Roosevelt and Churchill may ‘hot up’ the war pot

Such reaction may be the object of draft heads, Senator says