28. December 1972 The Siege of the Israeli Embassy in Thailand

December 28th in Thailand It was announced from the government to the people that by December 28, this will be a public holiday due to the inauguration ceremony of the Royal Crown Prince. Crown Prince of Siam At the Dusit Maha Prasat Throne Hall One of them is Air Chief Marshal Thawee Junlasapchai, who would later be very important to the event The subsequent seizure of the Israeli embassy in Thailand.

After the ceremony is finished around noon. It appears that there are strong rumors that an unrest has arisen from the terrorist groups. While Air Chief Marshal Thawee is on his way home At that time he was the Chief of Staff of the Military and the Minister of Agriculture and Cooperatives. Commanded military officers in various fields to prepare inquiries and coordinate with both the military and police officers. Including ordering Lieutenant General Kriengsak Chamanan (rank at that time) to prepare weapons for repression if the event escalates 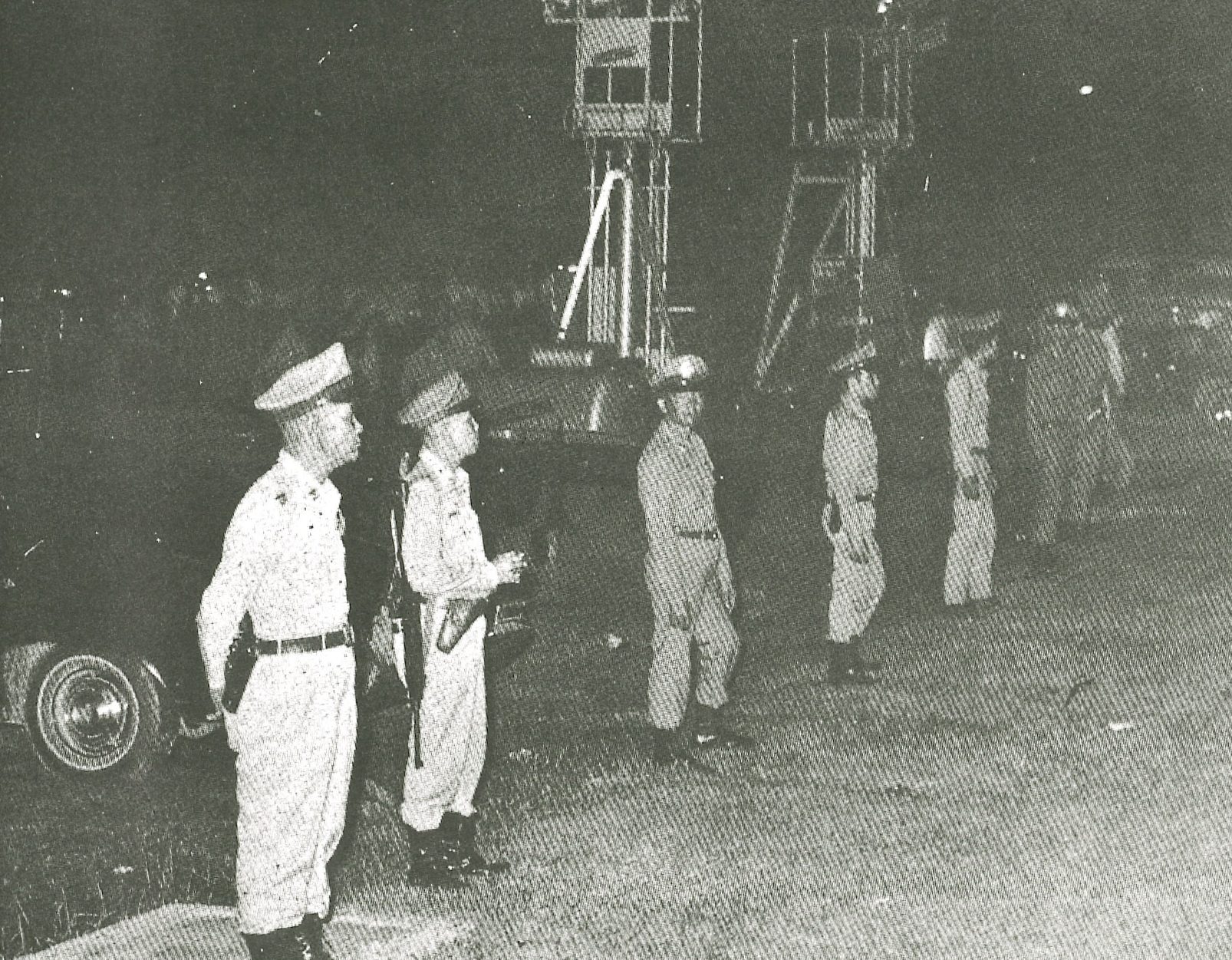 A picture of the police force encircling the area. Cut off the lights and use a spotlight to illuminate the Israeli Embassy.

At about 4.00 p.m. Air Chief Marshal Thawee arrived at the Front Command of the Supreme Command. He was informed that the Palestinian National Liberation Movement or “Fatah” invaded the Israeli Embassy in Thailand. Ploenchit Road area At about 12.00, 6 Israeli hostages were arrested, including

The Thai government knew about 30 minutes after the incident and therefore called an emergency meeting. One such plan is to prepare for the attack on the night of the 28th, the 29th, if the Palestinian National Liberation Movemen do not surrender.

At that time Gen. Narong Kittikachorn, son of Field Marshal Thanomkittikaj, told reporters that Know the clues of the movement for a long time But they came in scattered While the Israeli ambassador himself discussed with the prime minister of Israel. Which is likely not to follow the demands of the Palestinian National Liberation Movement.

Later, Thai officials were unable to take any convenient action as more and more groups of people entered the area. Whether it is a journalist, both Thai and foreign General public Student group And the Muslims praying for the Palestinian National Liberation Movement to stop the operation.

Air Chief Marshal Thawee assigned Brigadier General Chatchai Choonhawan (at that time) who held the position of Deputy Minister of Foreign Affairs Please contact Mr. Mustafa Panni, Egyptian Ambassador to Thailand to help. Since Air Chief Marshal Thawee has the opinion that Mr Thaweenapakorn, a Thai interpreter, can communicate in Arabic with excellent But there may not be as many psychology of speaking as the Egyptians.

During the operation Has held a meeting at the headquarters With both Thai officials Civilian and military There was a corresponding proposal to use force raids to save the hostages, but Air Chief Marshal Tawee had a different idea. Seeing that talking over the phone is inappropriate You need to have a face-to-face conversation, which will allow them to understand each other more than talking over the phone.

When the Egyptian ambassador arrived at the interim headquarters Air Chief Marshal Thawee therefore requested permission of Field Marshal Thanom Kittikachorn and Field Marshal Prapas Jarusathien to represent him in negotiations with the Egyptian ambassador. Brigadier General Male and his interpreter were both allowed upon request and also gave him the sole command of Air Chief Marshal Thawee to direct the operations.

Air Chief Marshal Thawee, who has studied the Palestinian National Liberation Movement as well and experienced the tragedy in Munich. He therefore explained that he was representative of Thailand. Not the Israeli government, and that since it has been operating continuously The Israeli government never met the needs of the movement. And if the operation at this time is so severe that the Thai people are seriously injured It is a bad thing because it has nothing to do with the Israeli-Palestinian conflict at all.

Before Mr A spoke of the frustration of being coerced by the West to give up his native land to Israel. Which made himself at the age of 40 and not married. Because he vowed not to marry until the return of his native land Many of them had to wander in tents. Living hard life He defined his life as "… their life is Meaning nothing If freedom, unity and the lands that he lost were not returned … "

Air Chief Marshal Thawee replied that He sympathized with the Palestinian people. But this operation matched Auspicious day of Thai people That should not happen to affect the minds of the Thai people. Which Thais did not have any connection with this conflict

Before Mr. A shows his condolences Before I speak, I don’t know that today is an important day for Thai people. Because it had been prepared for a long time and was ordered to act today So he asked for a moment to consult with the companions. During before Air Chief Marshal Thawee Jullasub, Egyptian Ambassador and Brigadier General Chunhavan and an interpreter leaving the Israeli Embassy Air Chief Marshal Thawee turned and joked that if there is any change in your mind, please do not shoot him.

Before Mr. A replied with that "It is impossible. Because we are friends now " 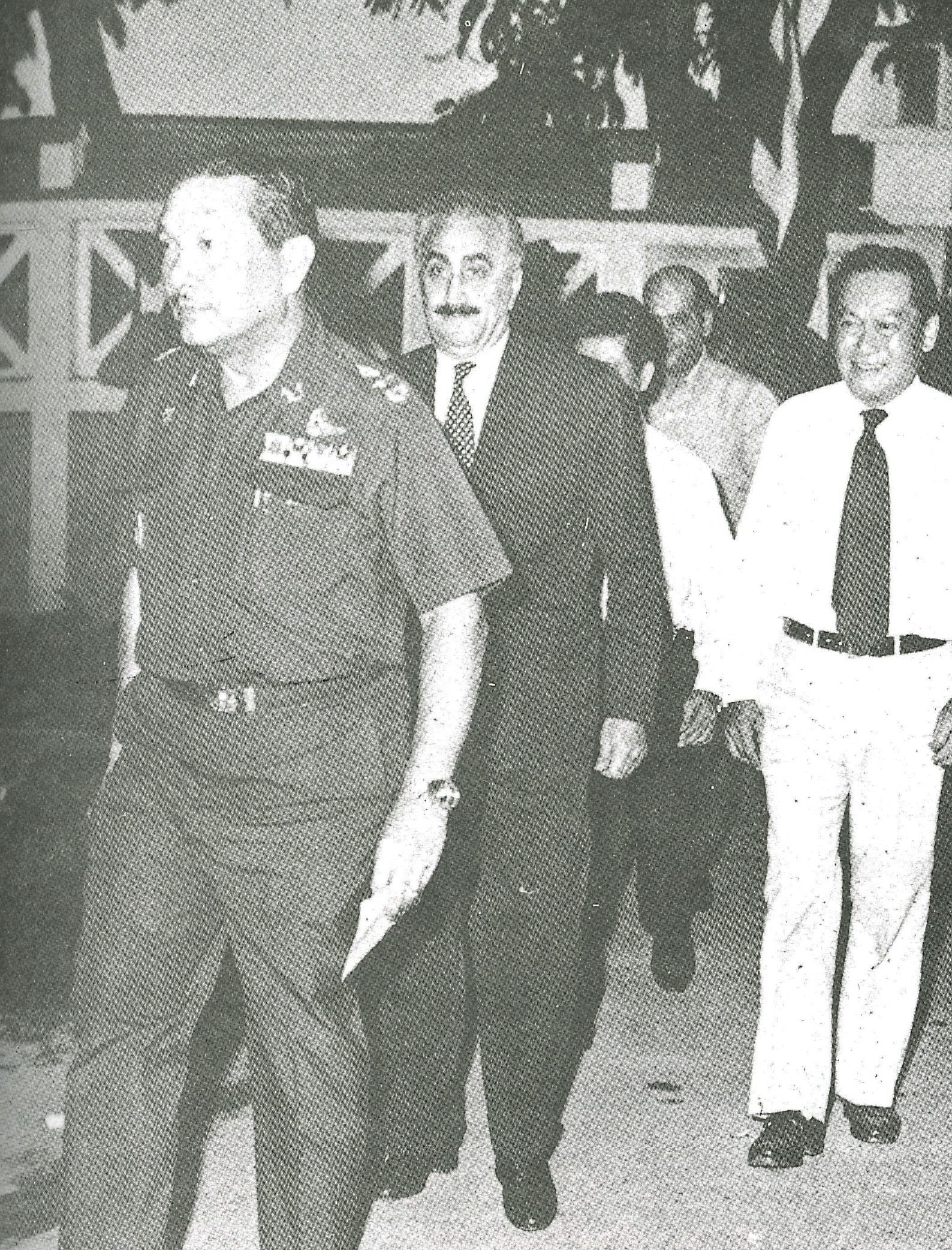 Images of Air Chief Marshal Thawee Jullasap, Egyptian Ambassador and Brigadier General Shunhawan and interpreter Walked out of the embassy

When returning out Air Chief Marshal Thawee reported to the Prime Minister and senior Thai government officials in the interim headquarters. Which indicates that there is a good trend Because these Palestinians do not appear to show violent aggression. Air Chief Marshal Thawee urges all sides to calm down and not panic. Because he will try to negotiate one more time While the Thai government tried to contact the Israeli government directly. But that side did not receive any answers and there was no clear indication of how to proceed. Which later it appears that it does not comply with the claims. Seeing that those Arab prisoners were severely punished Therefore, decision making and any action shall be the duty of the Thai government.

Soon after Air Chief Marshal Tawee Prompong has returned to negotiations again by bringing Thai-Style Beef Jerky and bottled water. Give it to them too

Before Mr A said he had sympathy for the royal family, the authorities and the Thai people who had caused such trouble. After consulting with his companions, he concluded that this operation should be abandoned.

Before calling on the Thai government to get them to take them out of Thailand By taking Israeli hostages Along with Air Chief Marshal Thawee and Brigadier Chatchai to serve Including plans and procedures for traveling outside Thailand They are all custom made and want the Thai side to follow. Air Chief Marshal Thawee replied that he would consider the request. Before being allowed to visit the Israeli hostages that were imprisoned on the second floor.

Mr. A said that they “… didn’t suffer anything. In addition to having a small rope tied to the legs and tied hands together… "

Mr. A wants to travel to Beirut. Lebanon But Brigadier Chunhawan disagreed because Lebanon is a small country. Should go to Cairo Egypt Because it is a large and powerful country among Arab countries and Egypt may be able to ensure more security.

At 3:00 AM (the night of 28th December 29, 1972) Air Chief Marshal Thawee returned to the Israeli Embassy for the third time with “chicken biryani” and drinking water.

Air Chief Marshal Thawee told Mr A that he had brought the rice. Can be eaten as needed When opening the package, he pretended not to eat, joining many of Mr. A’s friends as well.

Air Chief Marshal Thawee thought they were afraid that there was poison in the food, so they took a spoon to scoop each pack of chicken biryani to eat. It turned out that the Palestinian Nationals laughed and said, “… wait a minute, finish talking first and eat later.”

One of them, guarding the hostage on the second floor, shouted in Arabic. Egyptian Ambassador "… Chicken Biryani smell so fragrant Want to eat some Suddenly, the throwing bomb inside the bag dropped and rolled down the steps. Air Chief Marshal Thawee and the others below hurriedly hurried under the table. Fortunately, the carving did not come off, otherwise it would be Can be seen as a tragedy

Brigadier Chatchai later interviewed about his feelings now that "Well, that’s not mine. Otherwise they will all die. "

They wanted a bus to take them 4, 6 Jewish hostages, Air Chief Marshal Tawee. Brigadier General And the Egyptian ambassador Arrive at the airport There is a car to protect the front and back. When you arrive at the airport, stop as close to the boarding pass as possible. Must have them go up and check the plane first Thai officials are forbidden to carry weapons and forbid unrelated persons from approaching to prevent such incidents as Munich. When everything is ready They are willing to give all their weapons except the pistol. 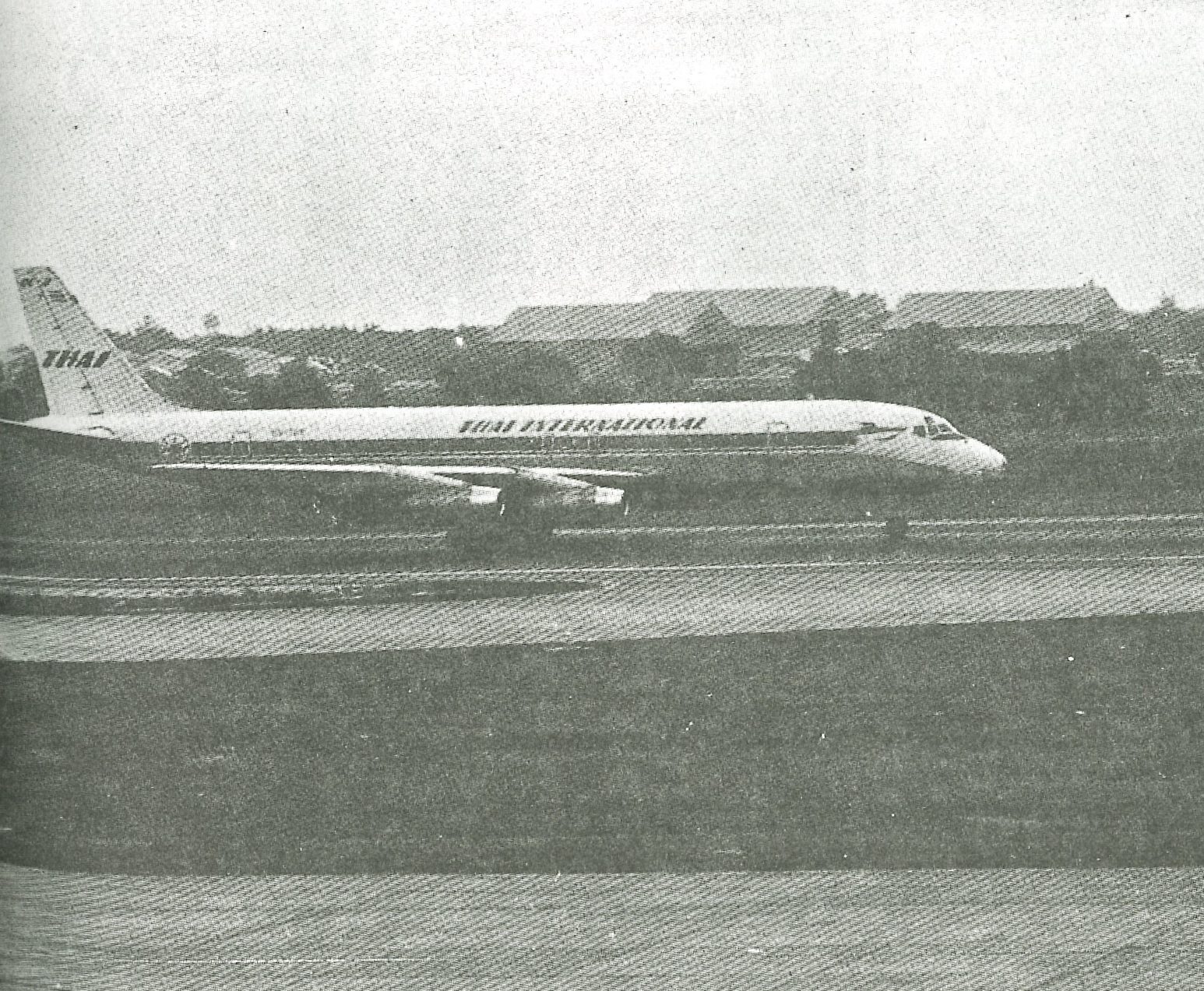 The Thai staff consists of

The aircraft crew consists of

After refueling at the airport in Karachi Pakistan completed The atmosphere since then has been relaxed and there are playing cards and talking about various stories until it is known that They are well educated A doctor A teacher Two others graduated with a bachelor’s degree in electrical engineering, one of them. Civil Engineering, Air Chief Marshal Thawee also bought a bottle of perfume for each Palestinian National Rescue Movement. (There’s still duty-free stock on the plane.) They’re delighted. Knowing that there is a product for sale, he buys a lot of money in both US and dollar currencies to buy a lot of things 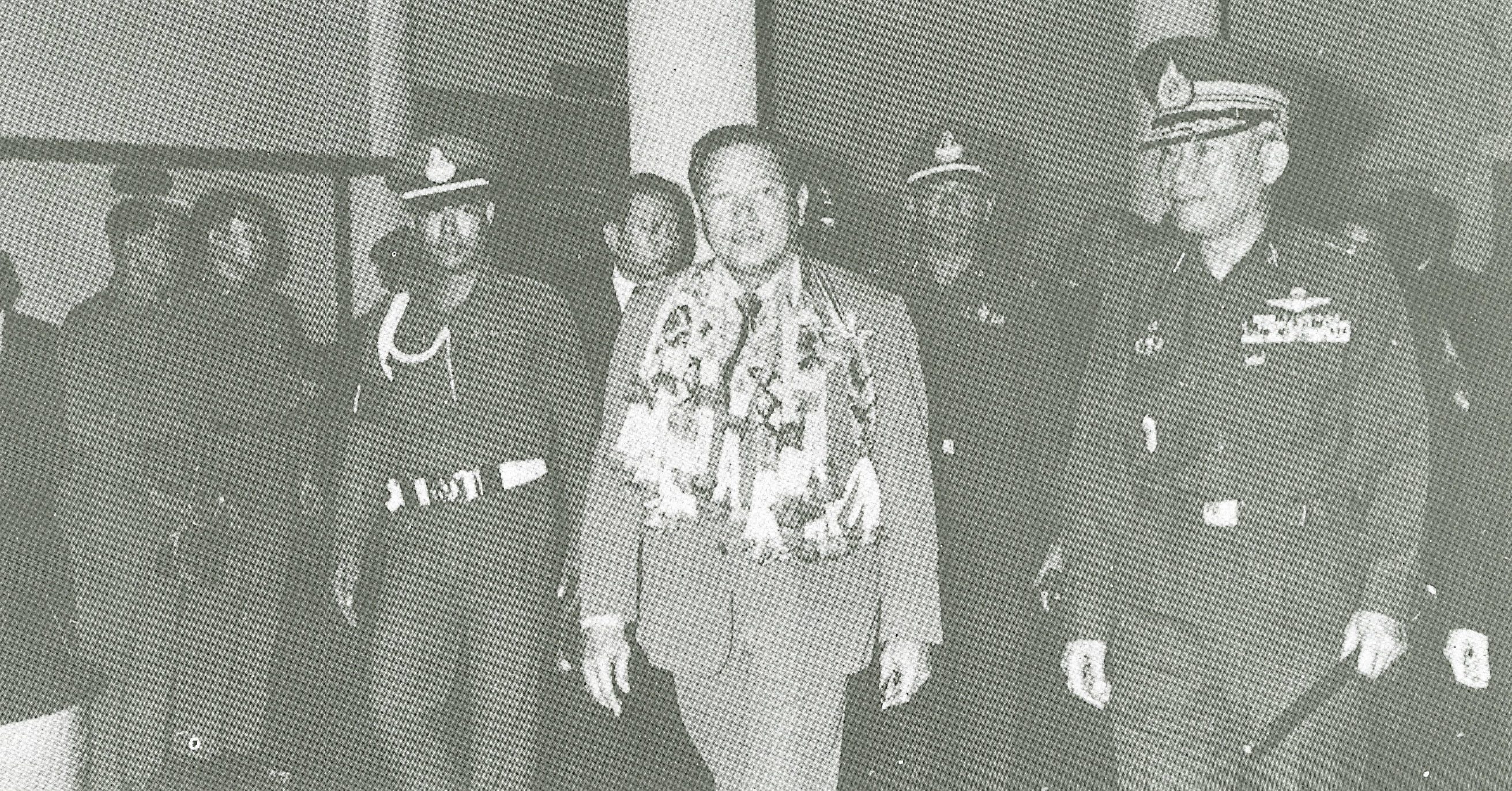 A photo of Air Chief Marshal Thawee on his return to Thailand.

General Chatchai is the founder of two political parties and has served as the party leader, the Chart Thai Party and the Chart Pattana Party.

Never knew about this event, might need to look more into it. Any books or articles written on this event?