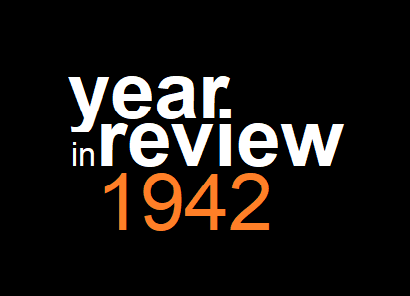 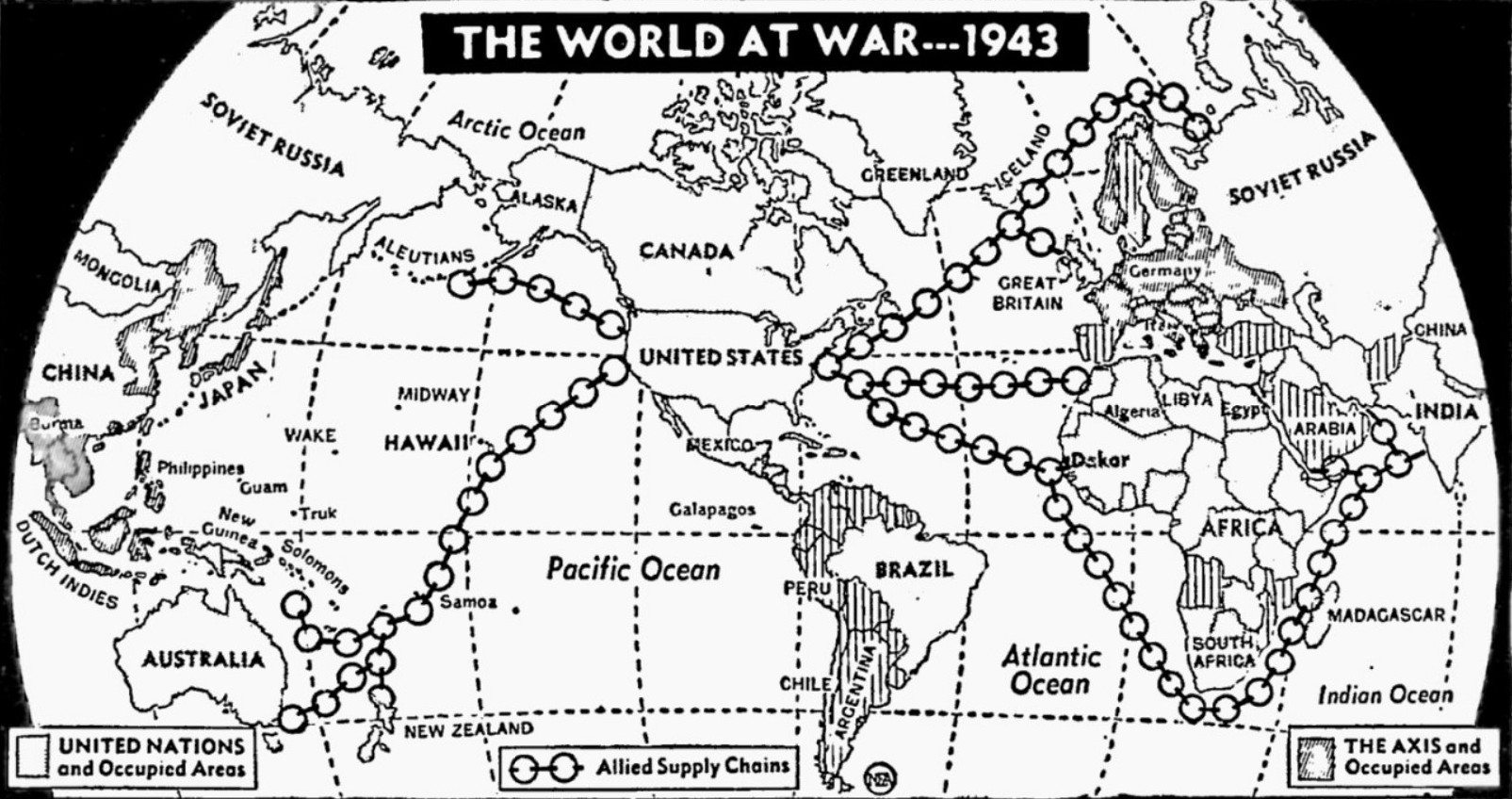 The first days of 1943 find the greatest number of nations in world history engaged in one common conflict – with 80% of the area and 60% of the population of the earth on the United Nations side. Even the 21 remaining neutrals, some of which have broken relations with the Axis, are greater in area than the Axis and occupied areas, but Germany and Japan control some of the world’s most populous regions. The maps show the world at war as it enters 1943 and as it looked on previous New Years.

9th – Allegheny County struck a “gold mine” filled with coal on old Bell Farm which was purchased for $3-million airport. Country purchased farm for $260,000 and coal believed to be worth $200,000.

12th – William Davis named Chairman of War Labor Board of 12. Joe Louis signs to fight for Uncle Sam for $21 cut.

11th – Women and children evacuated from Singapore as Japs pour onto the island.

17th – Jesse Levy, Brookline “numbers prince,” walked out of courtroom a free man because, as the state puts it, he allowed his 64-year-old father “to take the rap” for him.

18th – U.S. headquarters in Australia announces Yanks have been arriving for two months.

23rd – Occupational questionnaires to be sent to men in third draft.

26th – Thirty-one men were killed in an explosion of 20 tons of dynamite in a cement quarry near Easton, Pennsylvania.

3rd – Navy reveals loss of seaplane tender USS Langley. Lloyd Wilson, USN, shot and slain while sitting in a parked car with his fiancé near Erie.

15th – Hugh S. Johnson, columnist and former NRA administrator, dies at 59. Mayor Scully charges Councilman McArdle with attempted political blackmail in choice of police inspector. A 12-year-old Hazelwood boy was seriously injured when he inadvertently set off a bomb planted in a parked car in Hazelwood. Bomb believed placed there by numbers racketmen in attempt to “get” confectionery storeowner.

22nd – Mother of six children leaped to her death and two others suffocated when fire burned a section of Highland Building in East Liberty.

15th – Enemy sinks cargo vessel mile and a half from mouth of Mississippi.

15th – Russell Roddy, 18-year-old Latrobe youth, deliberately ran down stepfather, then accidentally crashed his auto into bridge killing his mother who was a passenger.

3rd – A hundred stores in Triangle open at night for shoppers.

6th – Laborers forced to pay fees to union to get jobs at Meadville war plant.

10th – Baltimore customer awarded $50 from retailer in instance of 2¢ overcharge.

11th – Nazis advance to Volga above and below Stalingrad.

28th – Census says U.S. population on Jan. 1 was 133,965,000, contributed to by 2,728,000 births during the previous year. Three-year-old Eleanor Hughes, with a sewing needle imbedded in her heart, dies in Children’s Hospital following failure of attempted operation.

4th – State liquor clerks suspended for walkout. Stalin says Allied aid far below contribution of Russia to the cause.

23rd – RAF raids Genoa and Turin in heaviest attack of war on Italy. Frank Philips, chairman of board of Philadelphia Co., dies at age of 65.

29th – Hitler reported to have ordered Stalingrad taken regardless of cost.

6th – British sign armistice with French at Madagascar. Wages are “frozen” at Sept. 15 level, and income is limited to $25,000 a year.

14th – British bombers blast Genoa. Capt. Eddie Rickenbacker and all but one of his companions, missing in South Pacific since Oct. 21, found alive.

29th – Prime Minister Churchill warns Italy to get out of war or face prolonged air attack from Britain and from Allied North African bases.

9th – Pat Fagan ousted as District 5 president of UMWA after 22 years of service. British drop two- and four-ton bombs on Turin, Italy, knocking city’s industry out of the war.

30th – Pittsburgh has second biggest flood in history as waters rise to 36.6 crest.

Anything can happen – and did!
Led by football, sports contributed daffy chapter to country’s war year

Upsets so common they cease to be upsets
By Robert Mellace

New York – (Jan. 2)
Sports made the most of its last big fling until victory is achieved.

The year 1942 was a spectacular year of upsets. There were, among other things:

The dethroning of the proud Yankees by the upstart St. Louis Cardinals.

The comeback of overworked Alsab.

The phenomenal pole-vaulting of Cornelius Warmerdam and distance running of Gunder Hägg, the swift Swede who broke a record every time he stepped up to the track.

The Washington Redskins getting hunk with the Chicago Bears for the 73–0 pasting of two years ago.

It was perhaps the craziest season in football history.

The young St. Louis Cardinals started rolling, Aug. 4. Theirs was an unprecedented rush that was never checked. Although the Brooklyn Dodgers closed well, such was the drive of the Redbirds that they overcame a 10-game deficit. Then they outplayed, outran, outfought and outsmarted the Yankees and freshman Johnny Beazley came through in the clutches.

College football struggled through a season marked by startling reversals of form and transportation difficulties to finish with precisely one unbeaten major team – Tulsa. The consensus was that Ohio State turned out the most powerful combination among the rah-rah boys. Georgia Tech and Alabama gave the Southeastern Conference priority on New Year’s Day Bowl games by drawing UCLA, Tulsa, Texas and Boston College, in that order.

Georgia had the college player of the year in Frankie Sinkwich. Holy Cross powered the biggest upset by exploding the invincibility myth of unbeaten Boston College.

A mass movement of champions and foremost contenders to the services left little first-class boxing talent.

The outstanding developments of the year were Beau Jack, an Augusta Negro who came from nowhere to win the lightweight leadership by successive knockouts; Tami Mauriello, who made rapid strides among the heavyweights; and Ray Robinson, flashy Harlem welter.

Jimmy Bivins of Cleveland repelled everybody of consequence except Joe Louis and Billy Conn, but disappointed in his New York bow.

Joe Louis defended his title – once for Navy and again for Army Relief, but the biggest one of all – the rematch with Billy Conn – was called off because the arrangements shocked Secretary of War Stimson.

Ben Hogan, the top money winner, bagged the Hale America tournament at Chicago’s Ridgemoor. This tournament passed for the U.S. Open, which was cancelled.

Ted Schroeder, of Glendale, California, won the national tennis singles convincingly enough to be ranked with the more accomplished players who have attained that status.

Closing with racing, Alsab finished one up in three meetings with Whirlaway. Shut Out helped Greentree to the Kentucky Derby and Belmont Stakes, among other rich events, lost to Alsab twice and beat him twice. Occupation won the Belmont Futurity, but Count Fleet set a world mile record for two-year-olds, won the Pimlico Futurity and generally was recognized as the finest juvenile.

If he cared for one, which he doesn’t, that is the one excuse the sucker who bets on horses could offer.

2nd – Manila falls to Japs. Stocks open year firm, close higher under lead of rails. Retail sales of autos and trucks banned. After production of 200,000 units, car output to be banned for duration.

6th – President Roosevelt in address to Congress asks for expenditure of $56 billion for arms program. President calls for production in 1942 of 60,000 airplanes, 45,000 tanks, 8,000,000 deadweight tons of merchant shipping.

13th – Hosiery industry hereafter to rely to synthetic fibers. Government to pay premium on production of copper, lead, and zinc mined above 1941 quota.

20th – Ganson Purcell made chairman of Securities & Exchange Commission, succeeding Edward C. Eicher who was made a chief justice in the District of Columbia court.

24th – Radio and phonograph makers ordered to cut output in half in the next three months and to undertake $2-billion military program.

16th – DuPont cuts dividend from $1.75 to $1.25. Supreme Court holds regulation of war profits up to Congress, not courts; finds against government in suit to recover $8 million alleged excess profit of Bethlehem Steel in World War I.

10th – WPB bans manufacture of tractors using tires after May. House votes to increase debt limit from $65 billion to $125 billion.

21st – President orders seizure of all alien patents for war and civilian use.

5th – WPB halts use of iron and steel in more than 400 civilian articles; virtually ends production of durable consumer goods.

7th – WPB bans use of copper in more than 100 civilian articles.

17th – WLB limits production toiletry and cosmetic items to save chemicals and other critical material. OPA freezes size and quality of soaps. WPB curtails bicycle models in July and August – 32% of 1941 rate.

7th – President Roosevelt in Labor Day address tells Congress to act to curb inflation or he will take the necessary signs himself. Record passenger traffic for holiday.

The year when the tide turned. But also the year the Nazis changed from fighting a war to win into taking “revenge” on helples civilians (Wannsee Conference).