Hi everyone, hope all of you are fine as usually and sorry for not writing content for a longer period due to this whole virus crisis and other obligations.

Anyhow since I following different historic YouTube international channels but also those from our own region who had different perspectives on the WW2 (and other) historic events I found out something very interesting and that is the official WW2 CHANNEL DEMANTY for the episode “Yugoslav Resistance and Serb Collaboration”. Demanty with subtitiles which they added could be found under: 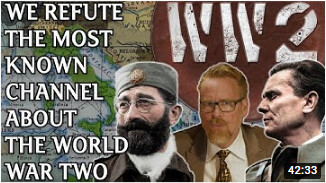 Channel Pogledi is based on the pro-royalists view of the war and although I have some objections with stuff they are placing on their channel I give them a huge credit for exposing out some events and many historical facts which are for years presented wrongly or due to communists rule after the war propaganda were not presented at all. They were also uncovering some important German documents from archives and I think channel is very legit agreeing or disagreeing with them at some topics.

Regarding the episode “Yugoslav Resistance and Serb Collaboration” unfortunately for the WW2 channel I also need to agree with them on many things and that this episode is not done very well, starting from the title itself (that could be very misleading) and from other facts told within the episode. Who followed my topic on this forum “Yugoslavia in WW2” where in the form of timeline I tried to present things as much realistic as possible you would also see that things told in the episode were told in the very fast forward manner often skipping some crucial points and present some facts wrongly (which Indy then tried to re-cover in the other episode dedicated to Yugoslavia). Sure, it is very hard to talk about the things without knowledge of documentation in the native languages which could also create misunderstanding or using books of Western historians that usually translated after war Yugoslav authors that often created propaganda books leaving some important things not written, skipped or just shaped according to then political present situation needs.

Funny enough author of this Demanty video offer to Indy and Spartacus his books translated into English for free with some important documents and more so it would be great if WW2 can check the video and made their own statement view on their episode or make episode re-make with some deeper details and added content that was definitely missing in already existing one.

Sometimes good critics from any side of historical view spectrum could be more useful for your work then always cheering out. What do you think?

Sometimes good critics from any side of historical view spectrum could be more useful for your work then always cheering out. What do you think?

Disclaimer: I have discussed this video with a friend of mine and history buff from Georgia whom I shall call JD at his request and this is what we thought of the video. We thought it would be a neutral take on segregation in the United States. Little did we realize how disappointed we would be. I won’t be discussing minor mistakes, like his pronunciations of certain names, because the content matters more here. Whenever I quote JD, I would use italics to differentiate. And at the end, I woul…