Would the invasion of Europe be possible without USSR

I would like to hear the opinion of some forum members on this topic.
To me it seems like the western allies faced a much weaker German army during their invasion of Europe then it was in 1941. The Germans in 1944 in the west were outnumbered, had little quality supplies (when compared to American units) and had inferior units. Yet they still seem to do quite a lot of damage to the allies during the march to the Rhine and afterwards.

How would the invasion have fared against the much stronger German Army of lets say start of Barbarossa. Would it even be possible to defeat them without the massive carnage in the East?

Love to hear from you!

Well, what ifs are tricky and Baggration was a big help for Normandy.

But the main thing is that apart from superior resources which would not have gone to lend-lease the Allies soul have gotten nukes in 45. This would have been a game changer and no amounts of sending 12 yo boys being sent against tanks for a hopeless causewould have changed it.

Oh and nice topic for the Normandy, Bavaria meet-ups

The Axis grinding down manpower on the eastern front that could no longer help when the Allies landed in France did have a big impact.
But with whatifs you can say what you want , it did not happen and there is no way to say what happened with the rest of history in that story.
What happened in that timeline of yours that the Nazi and Soviet Russia did not go to war , both Hitler and Stalin would have to have been out of the picture.
It is not like those two have a personality that they would have taken advise of anyone not to go to war.
If the Nazis had not started the war with Barbarossa Stalin would have started it on his terms when he was ready.
Could the Nazis have invaded and taken the British isles out of the war before going to war with Stalin

This assumes that the fascists and communists did not hate each other and wouldn’t see the other wiped from the face of the earth which is not true.

There was gonna be a massive carnage in the east because it was a war of annihilation. Either Bolshevik Swine or the great Aryan race would survive (from the german perspective).

However assuming somehow the Soviets or the Nazis don’t immediately go for each other’s throats when they felt they were ready, the Germans would still lose. Why?

One, there was a food crisis , hence they went for the Bread basket of Europe, Ukraine and where is that?

Two, After Japan attacks Pearl Harbour, Hitler can declare war on USA (again hard to say). Plus the Brits are getting massive lend-leases from USA.

Three Oil. The axis don’t have oil which is why fall Blau happens. What is the point of building thousands of tanks and planes and ships if you don’t oil to run them.

Four. The germans don’t switch to a war economy till they realise they have lost Stalingrad. The USA does that immediately and within 6 months the Pride of the Japanese navy is all but burnt toast. So… When do the Germans realise that they need to switch to the War economy in this timeline (where they don’t invade the USSR)? And with a Bigger war economy, lend lease goes up big time.

Here is a good video explaining why Germany couldn’t win WW2. (but yes in this video Germany does invaded the USSR) 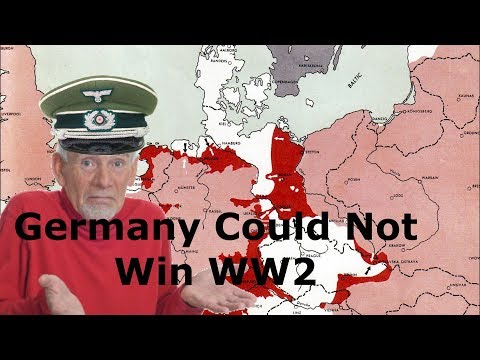 So would the invasion of Europe be possible? Yes. The only way I see is through Italy. Because with the USSR not in the war, the elite/trained divisions can be placed on the Atlantic Wall instead of rag tag divisions of the Western front. So… judging from the battles (to come) in Italy, the war may have lasted till 1947. Again… since this is alternate history, I can’t be too sure of things.

The only way this would have been possible is if both sides had kept honoring the Non-Aggression Pact of late August 1939. I think because of their ideological differences and especially Hitlers pure hate of Stalin and Russia conflict was inevitable. But lets say they honor it till 1944 or 1945… If that amount of time somehow passed, well than at the very least an invasion of Western Europe might well have been too difficult to pull off without use of Atomic Weapons. At the very least the Allies would have had to attack in several locations as they did during the actual playing out of the war. Southern France, Italy, and Normandy… But a full strength Nazi Germany at least for the first few years of the conflict would have been damn near impregnable until the full weight of the US manpower and Industrial capacity could be brought to bear. I think without atomic weapons the invasion of Western Europe maybe could have been pulled off but at a grave cost… And if the Russians and Nazis remained at peace, we don’t know how it would have affected the Battle of the Atlantic but we can assume it would have meant more money for greater numbers of U-boats and surface vessels for the German Navy… This also would have greatly complicated any invasion attempts.

With a loss on an invasion on Europe, it would not be unthinkable for the British to get their way and make a shift of focus to Asia-Pacific. Japan will go down just like OTL, but after that there is still a war monger in Europe and the urge to try another invasion would be a lot bigger. Only now do the allies also get to nuke every German city.

As a final nail in the coffin, with a beachhead in Europe and a severely weakened Germany, Stalin would see the time right to push his own invasion of Germany. Lacking the experience of OTL, the Soviet forces would have a slightly harder time, so the Americans may have reached Berlin before them. Now it’s time for the cold war, but without a severely destroyed Soviet Union and a somewhat more war traumatized (and broke) US and Britain.

That’s about how much would have changed. Some outcomes in history are actually a fairly stable point. You can nudge them a bit left or right, but the path will still lead to a mostly similar end result.