World War II in the Netherlands

Hello everyone, my name is Stefan (31) and I am from the Netherlands. I work as a history teacher and love to travel and visit places where history took place. I have my own non profit Youtube channel. I wanted to kick off the first topic with my own country by sharing some stuff. I live and work near the Grebbeberg. The place where the Dutch army fought against the Germans in May 1940. I wanted to share some photos of that, see below.

I also do reenactment of the Dutch army of 1939-1940. (As well as the Dutch colonial army 1939-1942 but I’ll post that in another topic.) Below you see some older photos of me in Dutch uniform. When I graduated from film school I made my graduation movie with these people. The upcoming time I would like to share some stuff about the Netherlands in WW II. Feel free to contribute. 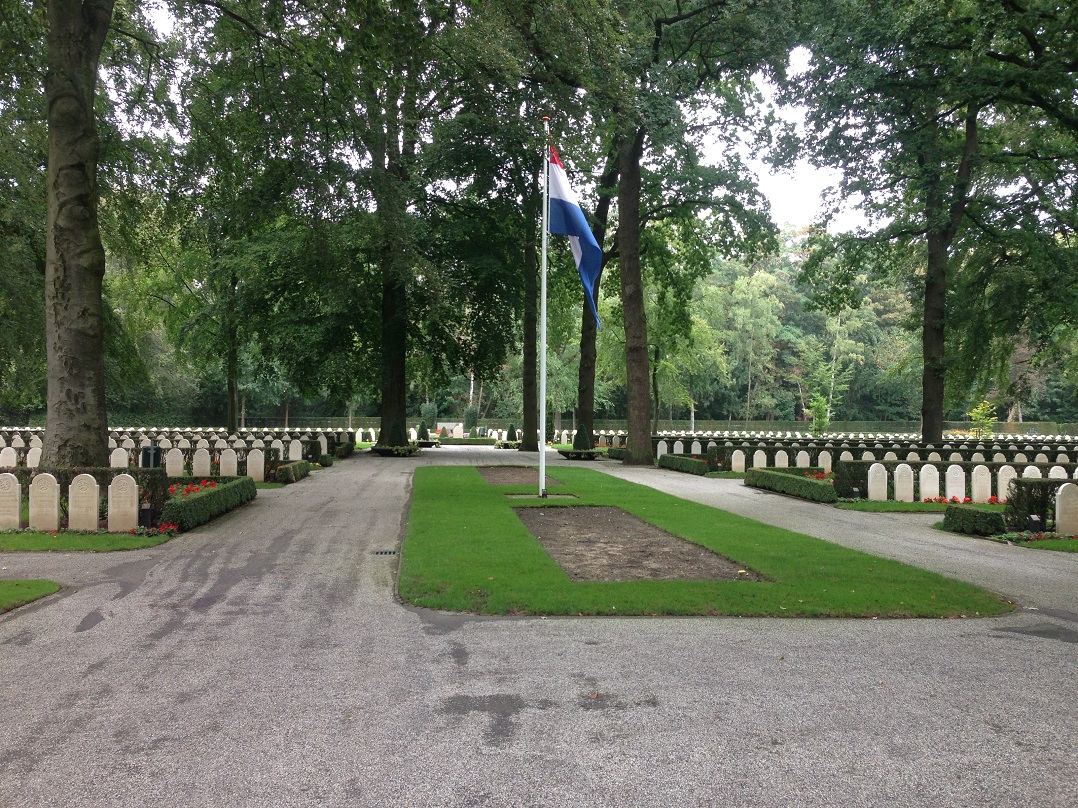 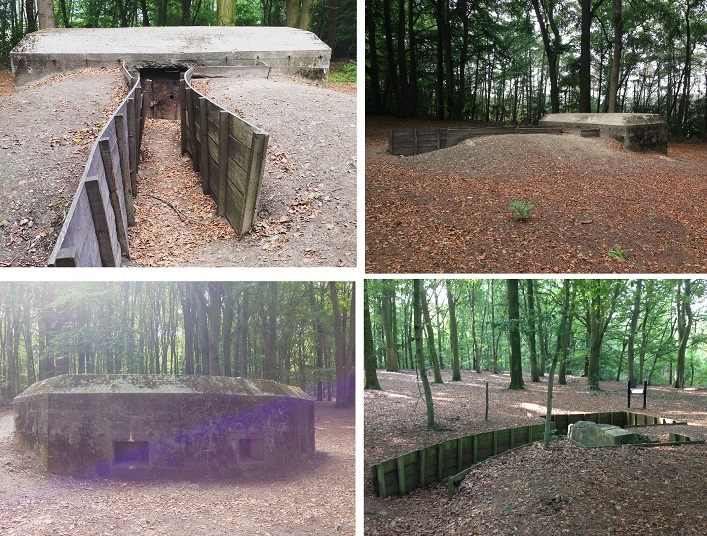 Reconstructed trench and authentic casemate on the Grebbeberg. 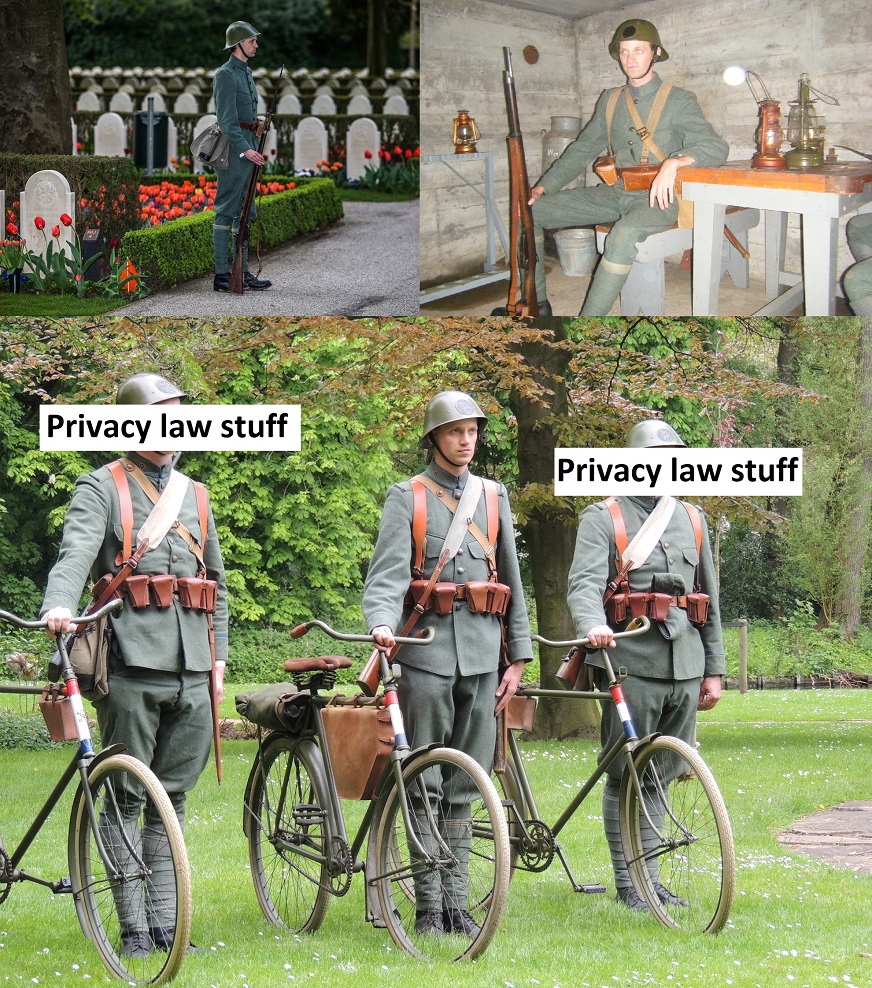 Here some photos of my during events. Top left is on the 4th of May on the Grebbeberg during Memorial Day. Top right is inside a casemate. Below is the ‘wielrijder’-brigade. Dutch troops on bycicle with carbine. On top photos I am Dutch infantry.

[SPOILER FOR 1944]
Battle of Overloon

Having failed to secure a crossing into Germany via the Rhine with Operation Market Garden, the Allies were left in a dangerously small salient in the Netherlands, constantly being harrassed by German attacks coming mostly from a bridgehead the Germans had secured on the river Meuse (Maas in Dutch), at Venlo. To the west of Venlo there were bogs and canals, securing that flank for the Germans. The Allies therefore decided to attack it from the north. To do this, they had to capture Overloon and Venray first. This military goal was laid out in Operation Aintree.

The 107th Panzer Brigade under Kurt Student (the same Panzer Brigade that had harrassed the 101st Airborne Division at Veghel during Market Garden) was also in the area near the bridgehead. They were informed by a Dutch SS member that the British were on their way to the bridgehead, and they reacted accordingly. A fighting force consisting of German armour and infantry were dispatched to the main road to Venlo. They laid an ambush near Overloon.

The Germans order the evacuation of Overloon and nearby towns, amounting to 3000 refugees all headed to Venray. On the 27th of September the first British tanks of the 11th Armoured Division arrive. There is limited fighting for a few days.

A few days after fighting broke out near Overloon, the 7th American Armoured Division gets sent to destroy the bridgehead at Venlo. These Americans encounter heavy German resistance near Overloon, and a handful of Shermans get knocked out by 88mm cannons and mines. The American attack is halted, and the survivors swiftly retreat.

On the 1st and 2nd of October 1944 the Americans resume their attack, with support of Typhoons and Thunderbolts of the RAF and the USAF. The Germans counterattack 2 times on the 3rd of October. Nebelwerfers and 88mm cannons induce heavy casualties among the allies. In the 2nd attack, Panther tanks are also deployed. Heavy fighting continues until the 8th of October, with multiple attacks by both sides each day. The British 11th Armoured division takes over fighting from the American 7th Armoured division.

On the 12th of October Operation Constellation gets put into effect. This is a plan by the British to finally destroy the bridgehead at Venlo. At exactly 11:00 200 artillery cannons open fire on Overloon and bombard it with over 25,000 shells in 90 minutes. After the bombardment British Suffolk and East Yorkshire battalions enter the ruined city, accompanied by Churchill and Cromwell tanks. The tanks get bogged down in the mud, and destroyed by PAKs and mines. After heavy fighting for the whole day, the town is finally liberated by the evening.

Fighting continues the next day in a similar fashion, with British gains costing many lives for relatively small amounts of ground gained. On this day, a Panther tank which now resides in the Dutch National War Museum in Overloon is destroyed, along with 4 Churchills. 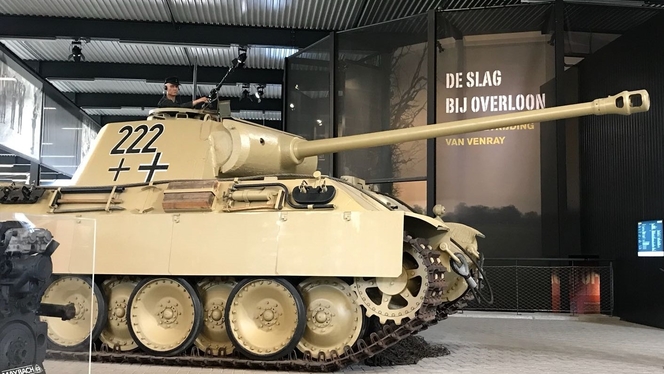 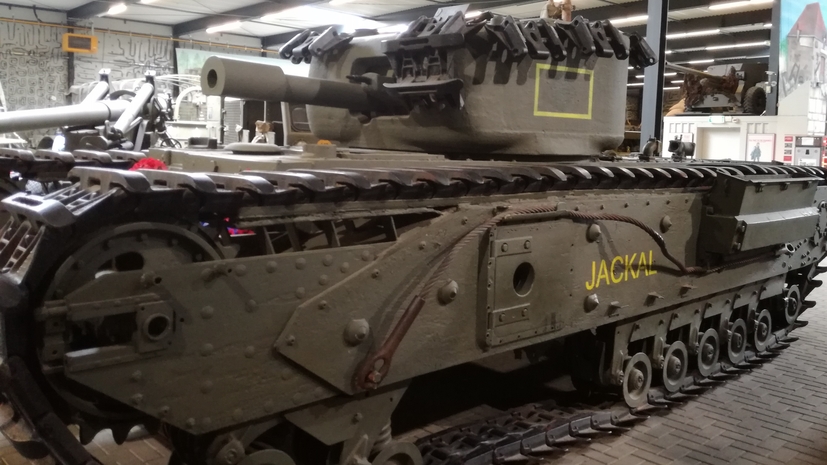 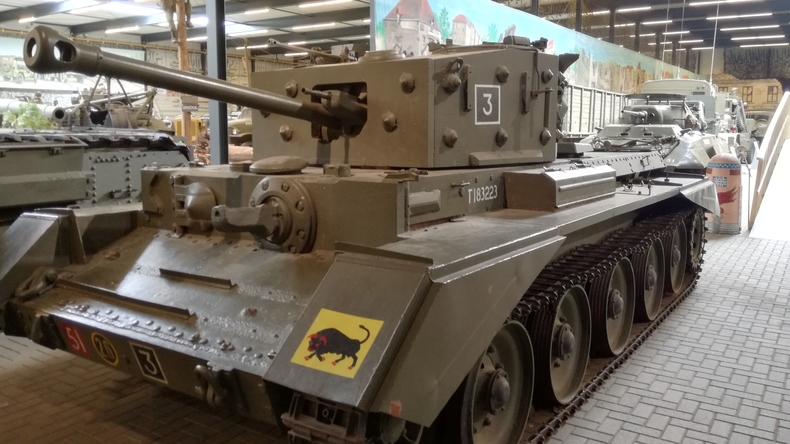 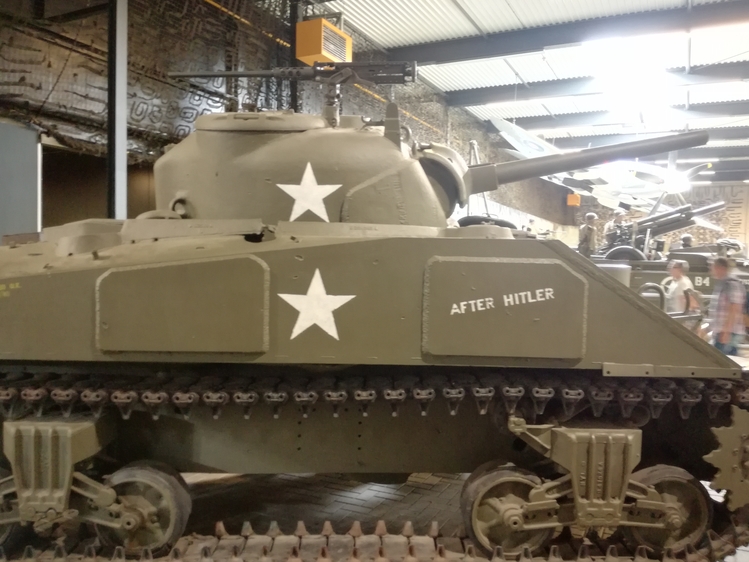 These are the tanks that saw action near Overloon, and have been restored and are on display in the Dutch War Museum (pictures are mine so no copyright)

To get to Venlo the British have to go through Venray. Between the current British positions and Venray there is a stream called the Loobeek. This stream is too wide for infantry and tanks to cross, and any existing bridges had been destroyed by the Germans. The British therefore had to make their own bridges. They do this on the 16th of October. 6 bridges are laid: 2 for tanks and 4 for infantry. The first thing to go wrong is a tank falling in the water, pulling the bridge down with it. Some regiments do make it succesfully to the other side, and the attack on Venray is opened in the pouring rain. A small while after fighting at Venray has started, the Suffolk regiment started crossing the Loobeek. Unfortunately, Germans in the area had been alarmed to this and opened machine-gun fire on the British. Many jumped in the ice-cold water, only to find that mines had been laid there too, causing heavy losses among the Suffolks. The Loobeek, as a result of the blood shed at the crossing, has since gained the nickname “Bloedbeek”, or bloodstream. The tanks that did cross the stream got bogged down in the mud, therefore being unable to deliver any support to the British and American infantry currently attacking German positions near Venray. On the next day, Venray is finally liberated after heavy losses on both sides.

In spite of the large effort, the advance to Venlo is called off, because troops were needed for the liberation of Antwerp and Noord-Brabant. The Battle of Overloon and the subsequent liberation of Venray had been for nothing. 600 civilians had died as a result of the shelling done by both the Germans and the British. The Allies had suffered 1878 dead, 3 planes downed and 40 tanks put out of action. German losses haven’t been documented, but estimates are around 600 dead and 10 tanks put out of action. 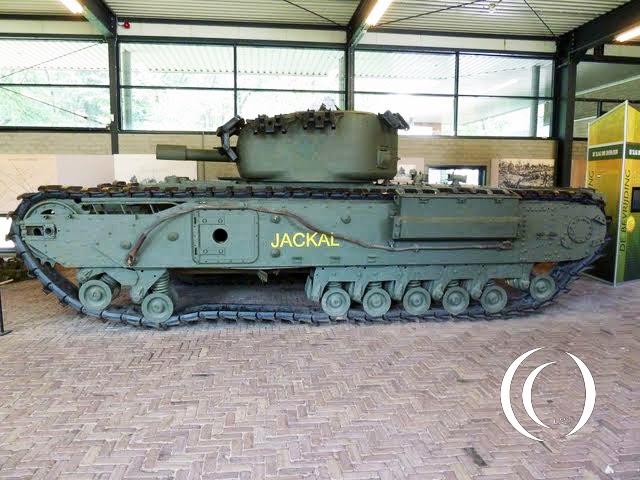 The Jackal; a Churchill tank left behind in the forgotten Battle of Overloon

On 27 may in 2013 the Scouts received an email from Christine; “My mother and I are travelling to the museum on Tuesday, specifically to visit the tank ‘the Jackal’. This was the … 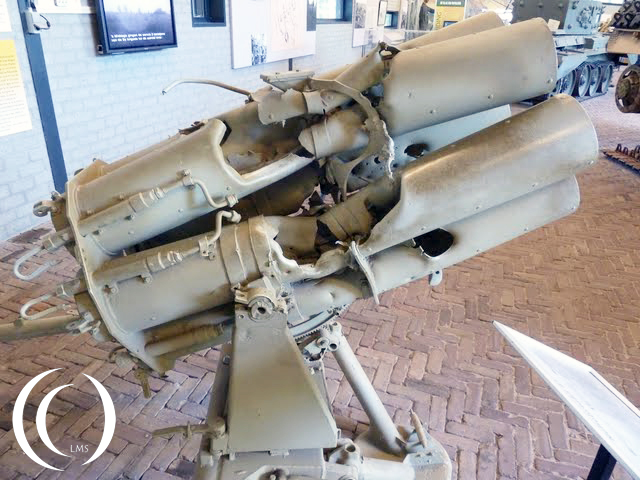 Tank Driver Bob Dare recounts the fate of the Jackal in the Battle of...

John Collier was a wireless operator/ loader on Cheetah of Number 2 Squadron of the Coldstream Guards of the 6th Guards Tank Brigade. John addressed LandmarkScout after reading the story of the Jac…

I have been to the Overloon museum once, it was pretty impressive. In Best there is also a worthwhile museum which is dedicated to the 101st and their involvement in Market Garden (the museum was originally located in Veghel): De Bevrijdende Vleugels.

My town, near Helmond was kinda skipped by the war. The invasion of 1940 and Market Garden went around us. We were in between Eindhoven and Hell’s Highway but our canal bridges were never a target.

I visited the Overloon museum as a child. Made a real impact on me back in the day. Great information you provided, thanks!

My hometown of Uden , was laying on Hell’s Highway so it picked my interest in the second world war early in my life …

We have a War Graveyard right across the local music venue , wich I always pay some respect If I cycle next to it …

Last half year I have been visiting , The Dutch War Museum in Overloon , wich is impression , the Airbourne Museum in Oosterbeek , where the battle of Arnhem was being fougth , the small museum in Best , Fogeltje talked above , ) ), and two months ago I deceided to take a walk in the area of Groesbeek , Nijmegen and visited the Resistance Museum where they did have a exhibition of the Communism Resistance , and near that is one of the largest graveyards of the Netherlands that one in Groesbeek , Canadian Graveyard …