Why was there no strategic bombing of German cities by the Soviet Union's air force?

At the moment I am reading an interesting book “So war der deutsche Landser. / So was the German soldier. (BpB 2021)”. One chapter is about the German fighter aces on the Eastern Front.

There I read this sentence:
“The East German historian Olaf Groehler claimed that the bombing of cities was a typical feature of imperialist warfare. The Soviet Union did not commit such barbarism. (page 193)”

Is that true? Was there no strategic bombing of cities, industrial plants or transport infrastructure by the Red Army air force? Did the Red Army even have appropriate bombers, comparable to the B17? When I think of Soviet war planes, the first thing that comes to mind is the IL-2. Have the Allies made deliveries of bombers (B17 / Lancaster?) to the Soviet Union under the Lend-Lease Act?

der deutsche Landser. / So was the German soldier. (BpB 2021)”. One chapter is about the German fighter aces on the Eastern Front.

Good point, they had the Pe-8 but in small numbers and I am not sure if they refrained from B-17 like bombers for moral reasons, Stalin was not the type who would have issues and even requested bombings by the Allies. It could be the expense and it is a complicated machine. However after they got their hands on a B-29 they reverse engineered in in a Tu-4 Heavy bomber. The tour guide I had in Monino , air Museum Moscow in 2015, started as a tail gunner on a B-29 and flew many jets afterwards. It took until 1947 before they built it so it doesn’t really count.

Monino is an excellent place to see planes you can’t see anywhere else. I did have a translator but as the tourguide was in his 80s he understood all the old aviation tech and we strangely both communicated well. He gave tours to add to his pension.

But great question, I hope more people have info!

I didn’t know Grohler yet but found and English language paper on him. He has an interesting history, trying to be an academic inside an autocracy. Great tip. We have a user from Russia, maybe he knows?

I think that Germany and Russia are connected by land so land warfare was their way of business, and thus both did not have a strategic bombing strategy. And why destroy the Price that you want to conquer?
Britain, as and Island protected by the Channel, thought otherwise, but they had to develop the strategic bombers after the fall of France. Until then, they were ill suited with their light and medium bombers.

The Russians acquired 73 B17 bombers from downed Or diverted US flights. They repaired and returned some of them but kept some and flew them until they got the TU-4 bomber in 1947.

Reports said they liked them but I didn’t see they used them for bombing.

I did not see that they bought my through lend lease. These were always in fairly short supply considering everywhere we used them so I am not even sure we offered them any. Developing their own heavy bombers never seemed to be a soviet priority. Moral reasons doesn’t sound like Stalin to me but economics makes more sense.

Moral reasons doesn’t sound like Stalin to me but economics makes more sense.

I think so too, besides technically the B-17 and its ball/turrets with sights computer, and the Norden bombsight computer was very complex and hi techt, The Soviets liked to keep everything simple and effective.

However the Russians did invent the 4-engined bomber in 1913. It was also the first plane that had an enclosed cabin in the transport version. (let me know if not correct). The originals have gone but there still is a 1:1 copy at Monino Air museum. Russia was much interested in long range landplanes before WW2 which obviously had to do with its geography. The country is huge with long streaks of empty space. 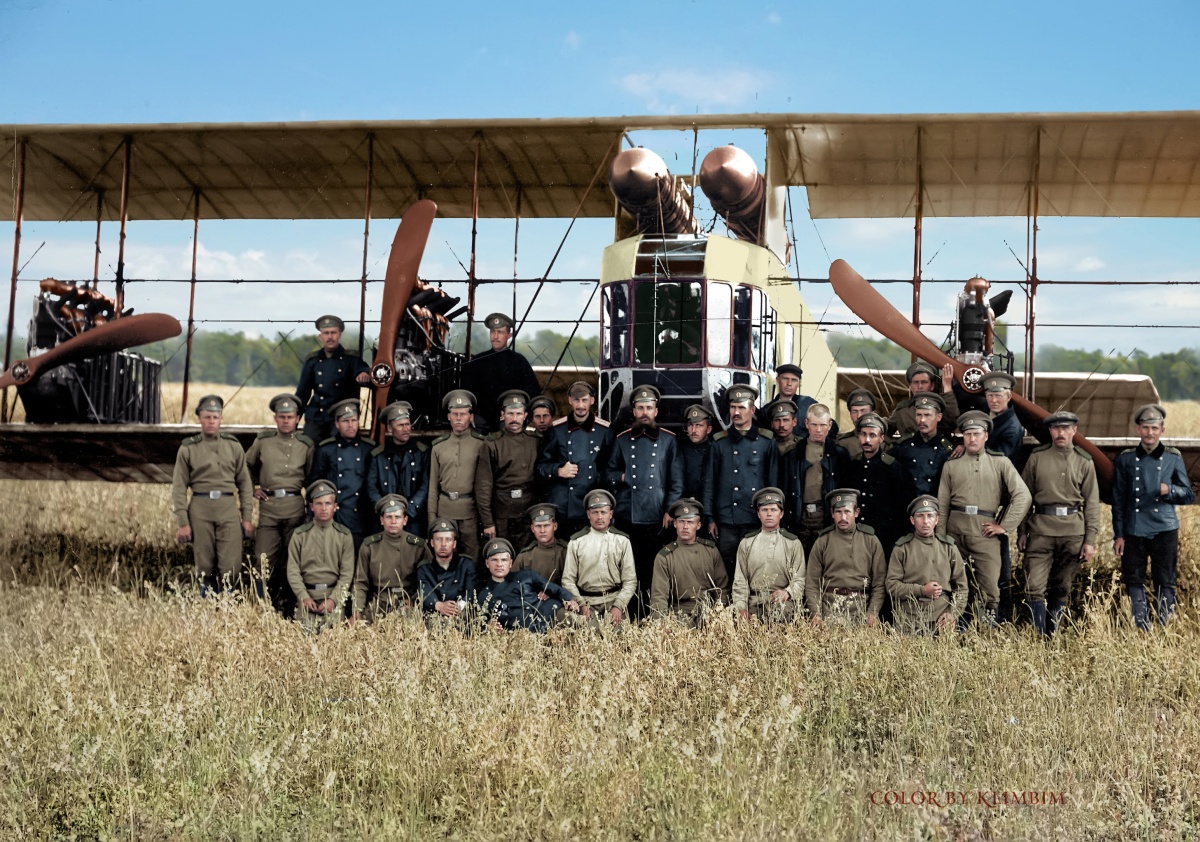 I take absolutely nothing away from Russian aircraft designers. They have a long tradition of quality work. I say it as a production problem. Too many parts, too many rubles and not enough time. The US and Britain had both been working on bombers well before the war started.

Great picture. Definitely Russia and the US were thinking aircraft to deal with large countries long before the rest of the world. Our Capitalist economy beat them to the punch that time

The Soviets did bomb Berlin in 1941 so there was no moral inhibition.
The Soviets had relatively few heavy bombers in the prewar period. After the German invasion production priority was given to weapons for the ground war. By the late war the Anglo-American bomber campaign was doing all that was possible so there was nothing to be gained by diverting resources to strategic bombing.
For the Anglo-Americans bombing was the only practical offensive force against the Reich until '44. Different geography, different strategies; the UK focussed production on bombers and convoy escorts while the Soviets did tanks and ground attack aircraft.
The choices were driven by practicality, not political ideology.

Interesting as I read Merdiolu’s accounting of the meeting of Churchill and Stalin this week in history, Stalin thought the bombing was a great idea and was necessary to break morale. He also wanted the RAF to drop their 4 ton bombs more. Certainly indicates that Stalin was a fan of bombing.

Edited because I can’t spell.

Certainly indicates that Stalin was a fan of bombing.

Yes and he did try to get his hands on the heavies ASAP and built the “B-29 copy” after the war on which my tourguide in Monino started as a tailgunner. Also he requested the bombing of some cities according to the RAF but that was denied after the war by the Soviets when they became adversies again.

As for morale we must remember that the Germans / Austrians and Ottomans gave up in 1918 when all was certainly lost. That was the history they knew and soon Italy would bravely revolt against Mussolini and his gang. So that thinking on the effects of morale was much more justified than the too large group of historians who from their study spend years on books condemning historical figures for not seeing the future correctly. Decision making is about creating chances for success, that chance is really never is a 100%.

Yes history says that nations don’t fight till all is lost. That is what makes WW2 such an anomaly is that 2 nations fought when they were clearly outgunned and outmanned and the only question was how much ruin would they have left