Why is the role of the atomic bomb in japan surrender so polarised?

by being “polarised”, I mean that on the internet, there’s going to be 2 extreme: one that will say that the atomic bomb didn’t had any effect on the surrender, that it was the soviet invasion of mandchuria that made japan surrendre and another one will act like it was the sole cause. Why couldn’t it be a ombination of both factor? to me, it seem more like the 2 had influences on japan chosing to surrender when it did, so we shouldn’t diminish the role of the bombs or the soviet invasion of mandchuria in the surrender

I wish you luck in this discussion. I have not had good luck because it is so polarizing. I think you are correct in your assumption that both played a factor.

Having just read Hell to Pay I will say thank God we didn’t invade as Japan was far more prepared for this than we thought in 1945. They were also not surprised by the Russian attack and had plans to deal with this also.

In my opinion no external event was they Key. The Key was ongoing internal Japanese politics and the Emperor’s actions. Until he spoke, not a single Japanese unit had surrendered. Only his intervention stopped the war faction from forcing the war to continue. I’m sure others will disagree and I’m sure there is no right answer.

It is incredibly complicated and events are still poorly understood. Additionally the roles, thoughts and justifications expressed by the various factions in the Japanese High Command are contradictory. One can find justification on both sides for a nuke-dtiven or a soviet war-driven surrender. Many witnesses could and did try to save face by downplaying the American role to American audiences

What is known is that parts of the Japanese Army in Tokyo mutinied when they learned the surrender was to be authorized and announced by the Emperor, and then proceeded to try to kill the Emperor to prevent the surrender briadcast. The mutineers failed. You couldn’t make this stuff up, it’s too fantastic.

Very good question, Firstly the Americans trained Soviet amphibious troops in project Hula to invade via the Kuriles so they worked together. Stalin also knew about the US nukes and according to Weinberg “to the best of our knowledge” also about the Japanese nuclear programs in Tokyo and Korea (near Russia, which was much further ahead than assumed).

So the Soviet attack is not a completely separate event but intertwined. Appearantly it is hard for a lot of people to see connections and it becomes a who gets credit.

A second reason is not the past but the future of nuclear weapons. Almost all people are against the use of nukes and there were gigantic demonstrations with no more Hiroshima’s. While I totally agree on that, there was the argument that saying the nukes did help end the war. (Hiro Hiro said it in his surrender speech),would make the use of nukes in future more likely. The still ongoing threat of nuclear war feeds the discussion as well, not just what happened in 1945.

I think this question is the right way to initiate this important discussion, as I can also see from the other very balanced ansewrs.

I think we put a lot of hindsight into this matter.

If anybody was aksed during the war: we have one bomb that can end the war - shall we drop it? everybody would say: yes. Guess the same thought was behind british 1000 bombers raids an so on.

If you ask: shall we kill 100.000 of enemy civilians to save 100.000 of our troops? the questions get more complicated, though it is almost the same.

If you asked: shall we build a weapon that can kill the entire population on the earth if it gets into the wrong hands? I guess everyone woulds say: dont build it.

And personally I find it hard to compromise the answers, and thats why I think we end up a long way from each other. Seen from different perspectives we get different ansewrs.

Thats why history is so important. We must learn that wars is a bad way to solve political problems, because it is the life of soldiers and civilans from different nations that are at stake. They dont hate each because they dont know each other. They just want to live a peaceful and ordinary life, but it harms ways they are loyal to their nation and will do anything to protect it.

The questions posed in your answer is similar to the trolley problem. Would you kill one guy to save 5 of them?

Wars are a bad way to solve political problems but it hasn’t stopped humans from killing a bunch of people to gain some land (Russo-ukrainine war, american-iran war etc etc) and sometimes is the only war to solve some problems (eg : how do you stop the Taliban onslaught in afganistan?).

oh no… my bad. i meant iraq

Oh, I see. Iraq wasn’t for land though.

The Indian Wars are more of what you consider a “land war” than Iraq.

oh well… I don’t know anything about the indian wars (you mean the american indians right?). Iraq was for oil. Any land has resources which some guy wants, so in a way it was for land.

Iraq was for oil.

No, it wasn’t. It was the fear-driven war, not helped by Saddam being shady. Calling it a “War for Oil™” is a conspiracy theory. Explain how oil prices went up, not down.

Shouldn’t have stayed there tho.

It wasn’t?!! Well… I am bamboozled. So why did the Americans go and invade iraq? It wasn’t for WMD as Bush claimed. So… that leaves out only oil as the potential reason as to why they wanted to invade iraq.

So why did the Americans go and invade iraq?

Fear-driven reasons (remember, War on Terror) as well as Saddam being shady with regards to his arsenal (hence the WMD fiasco). It certainly wasn’t for oil. We have our own oil and the Canadians, Venezuelans, Saudis, etc., exported more than the Iraqis ever did.

Saddam did have WMDs, or at least ones last used in the '80s and '90s. Used poison gas in the Iran-Iraq War. 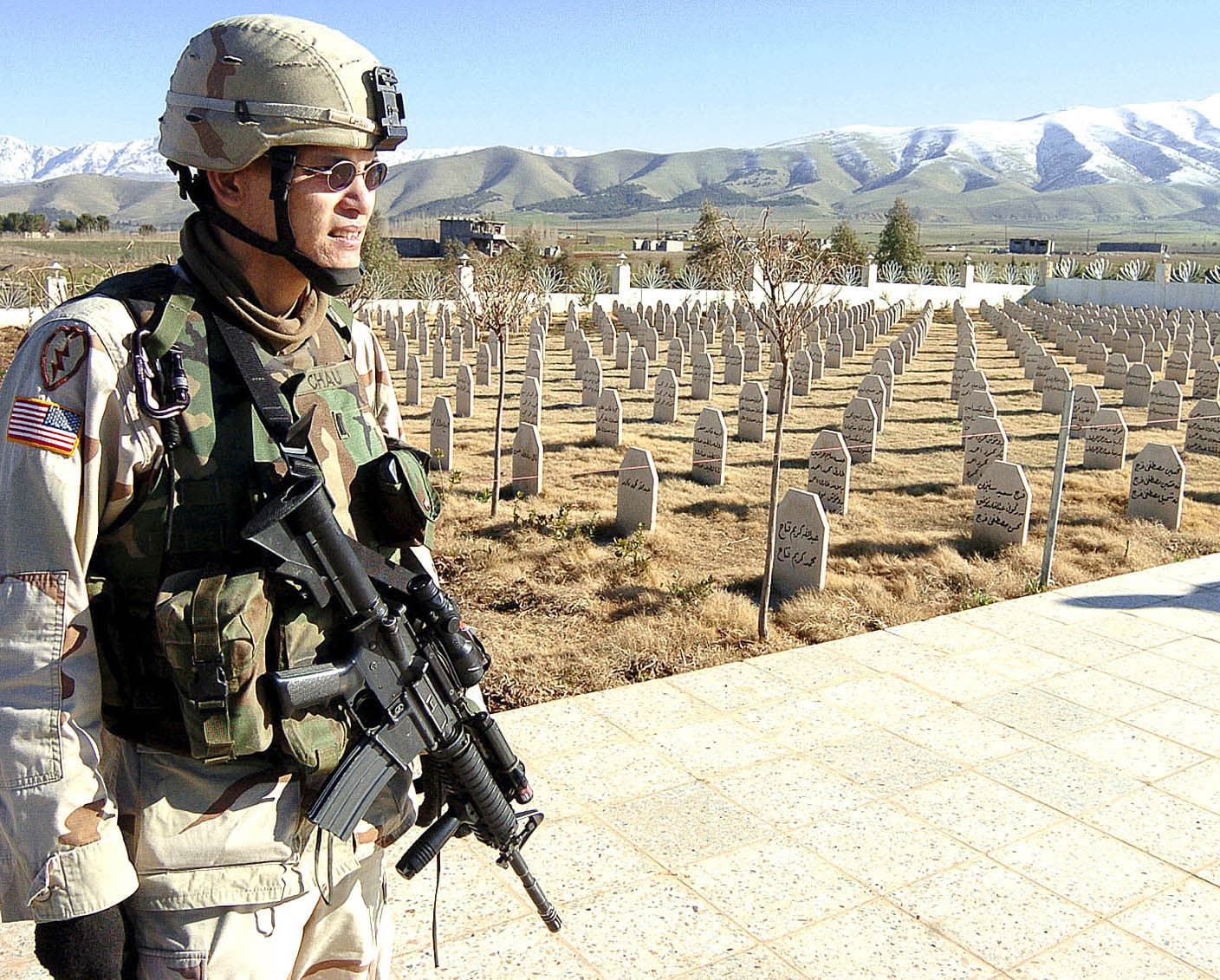 Don’t listen to whatever Michael Moore pulled out his ass.

well… I don’t know who Michael Moore is as I am not American.

That would explain why they couldn’t rebuild iraq after the war as they simply went and invaded. But that leaves another question why did Poland, UK, Australia join too? What were they gonna gain from it?

They did help out. The United Nations had a problem with this intervention, because they couldn’t exactly verify the accusations against Iraq (then again, Saddam did either delay or outright refused UN inspectors access to his arsenal so… it’s likely the UN being the UN).

It also doesn’t hurt to differentiate which of the two Iraq wars you are talking about. They had very different aims. Since they were only 12 years apart, people sometimes confuse them as one action.

Iraq had used gas against Iran and it’s own civilians. Definitely a WMD but not the WMD Americans were told he was seeking the ability to create. Saddam standing up to the UN inspectors made him appear tough for his propaganda and for so many different reasons of which books are still being written, Bush was convinced and convinced America that we could be facing an atomic Iraq very soon. This was against UN resolutions and we enforced the resolutions. This led to at last count 17 years of misery for all involved.

Why did all the countries participate? Because it was a US led But UN sanctioned action. Afghanistan on the other hand was a NATO operation.

But perhaps we should keep the discussion more on topic?

Japanese politics was so very murky. The war faction felt that with enough Americans dead we would agree to a compromise allowing Japan to stay intact and keep some of her possessions largely Korea and Formosa and Manchuria. They were willing to sacrifice up to 20 million Japanese to accomplish this. They also argued that even though they couldn’t stop Russia on the open plain they could fight them in the Korean Peninsula on more even terms. These guys were some kinda crazy evil but if the war had gone that way the blood would have been incredible.

That makes the events of August 1945 so controversial. Whatever Was the reason that motivated Hirohito to act against the majority of his government probably spared millions of people including himself.

That’s a far better answer than I gave here. Thanks.

. I tried to stay away from what I actually think of US foreign policy. Wrong time and place for that discussion.