Why Did Hitler Declar War on America?

Why did Hitler declare war on America when America’s industrial capacity was capable of overwhelming the Germans and he was tied down in Russia?

A very very good question which had baffled people forever.

I personally like the explanation of Gerhard Weinberg to be one of the few feasible. Gerhard is also used as a major source of this channel.

In short he wanted to declare war on the USA anyway and he really thought that Germany lost WW1 due to the revolution and the decadent USA was useless anyway. He also needed a free Navy like the Japanese would listen to white supremacists, that is me not Gerhard.

Also Ribbentrop argued it would look much better if Germany declared war and not was the one being declared war on.

Besides I see some similarities between the planning of the battle of the bulge/Ardennes later which originally was planned for September 15th 1944. Instead of being on the defensive Hitler was always planning mythical crazy offensives to the end which frenzied his supporters. (Snow and Steel Peter Caddick-Adams makes this point). He kept thinking up crazy offensives all the way into the Reichstag.

See below for the full and as usual with Gerhard long (and free) article. Please let me know your thoughts if you want.

Why Hitler Declared War on the United States

Was it an irrational act? Hardly. Pearl Harbor merely gave him the excuse he had long been seeking.     WHEN NEWS OF THE JAPANESE ATTACK ON

I read this article and it is a very in depth description of Hitlers intentions with the US. Nicely done, thanks for sharing!

I find it interesting looking back, many say ‘how foolish to fight against the industrial might of the US’. However, to the belligerent actors of the world in 1941, it wasn’t at all clear the US would fight, let alone that FDR would mobilize the entire economy for total war. We know the US did not budget much for an army, navy or hardware in the 20’s and 30’s and these optics would help motivate future enemies. The Japanese had thought a good punch in the nose at Peal Harbor and the sleepy US who soon negotiate a settlement-oops.

We understand ‘Hitler the corporal’ ambitions to rule the world, but I’m curious about the war planning by the military professionals in Germany. Did they fully understand that the city of Pittsburgh could and would generate more steel than both Japan and Germany combined? and was a long war with the US a concern to them for that reason. If they did, it obviously wasn’t well digested by the furhrer.

If you liked Gerhard you very likely also will enjoy this old ginormous schoolbook. It basically explains the World Wide strategies of the major nations and the options they had over time. It is very good in the sense that it gives a much better view that just studying the theatres by itself. Also it gives you an understanding at how many chess-boards everyone was playing at once minus the chess rules and hardly anyone followed rules

It is also incredibly well researched and a common source of TG.

Many thanks for providing this. A volume is currently in transit to my home based on the recommendation! John

It was always a bit of wishful thinking that the US wouldn’t or couldn’t mobilize. A professional assessment concerned with the worst case of what the US could do to Getmany would show a protected economy with ample resources and a population of 170 million.

What the US had in peacetime really didn’t matter. In WWII the US used the same mobilize, industrialize and out produce strategy it used in the US Civil War against the Confederacy. That is not a coincidence. Any rational assessment would show the US capable of a frightening level of mobilization. It happened in WWI and it happened again.

Many thanks for providing this. A volume is currently in transit to my home based on the recommendation! John

You are welcome, I inadvertently learned something new as well because of the question of klkevelson1 :

Gerhard was also the person that published Hitlers zweites book. Being a Jew who had to escape Germany and thus survived he explains the reasons why. I knew about this book but not that Weinberg published it.

This 1928 book gives some of his policy ideas AND was only found in a safe in 1945 by US forces. Pretty ironic that a Jewish historian would publish this lunacy!

Here is a link to an article why he published it.

Here’s TIK’s take on why (please watch the whole video before freaking out): 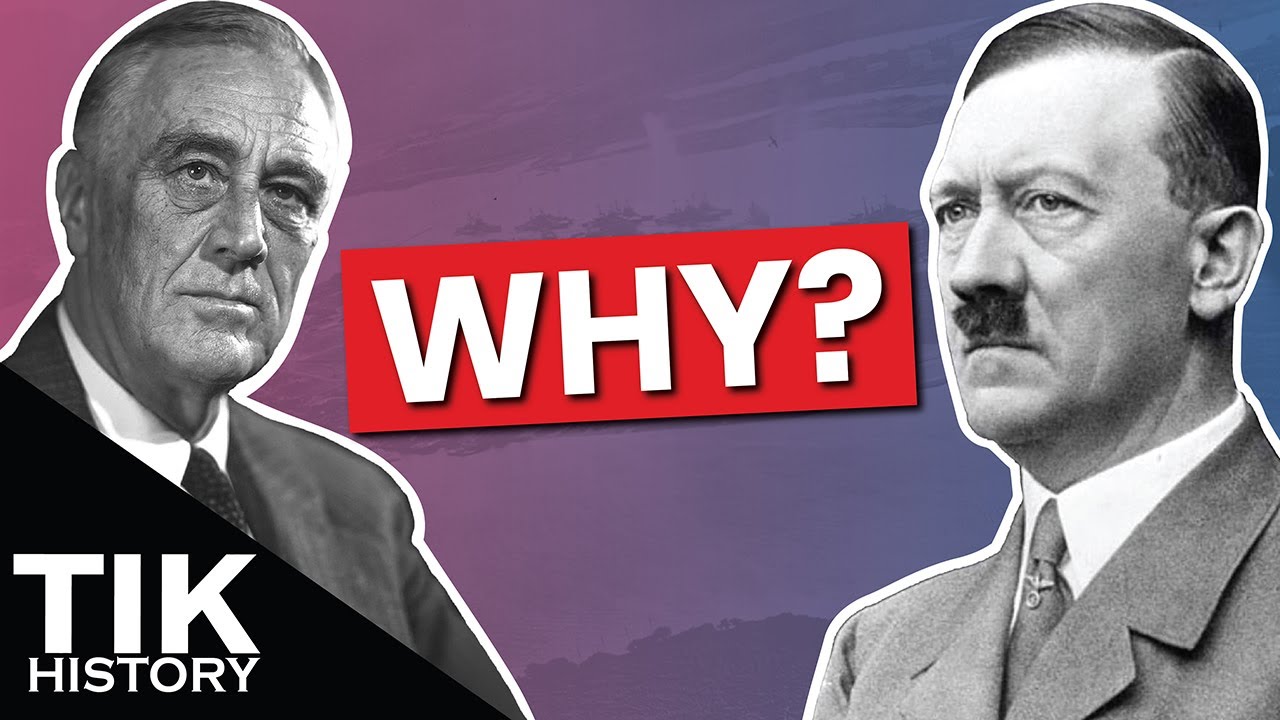 Thanks for sharing this video! What I find most useful is that the narrator is quoting world leaders verbatim and offering analysis of these quotes. It allows for further study and consideration. So often, these style videos are short on reference and quick on interpretations.

It’s interesting to note that it’s seems standard form for these leaders not to declare war, but to make clear war exists already and we (whatever country) are responding reciprocally.
Great stuff!

He kind of tells the same as Gerhard as Hitler thougth (or maybe his excuse) that it is always the others fault. Obviously he continously did portray Germany as the victim of World conspiracy. What TIK says isn’t really knew but a very good point as people tend to read too much into other “wargaming arguments”.

I assume that was his opinion and hence he had no problem backstabbing his earlier Allies (e.g.Stalin who gave him rational reasons not to declare war on Hitler.)

As for who started war , My grandfather (Netherlands) got quesitions in the war from a German Party man who got to talk to him and really wanted to know WHY the Netherlands was so stupid to start a war with Germany. My granddad needed some time convincing him that it was the other way around. They became friends (just to people stuck in a “Alice in nightmareland (Stuttgart area)” And after the war my grandparents sent food to them as they kept my granddad alive in spite of his refusal to work for the Germans. The Germans /Hitler ALWAYS portrayed themselves as the party being attacked and Germany didn’t have a culture of attacking the leaders.

Finally I think Clausewitz made a good point by stating “war is a continuation of diplomacy by other means”. I am sure that there are “economic wars” in times, even after WW2. (Deliberately ignoring now). By the wat the point of Clausewitz in my view that this is not just on how to start wars but making sure that wars NEED to have diplomatic goals, more often than not wars get their own dynamic and can’t be stopped because no one wants to take the losses. The age old question “why again are we still at war?”. I think his point is their should be a connection and the conflict counter starts before the declaration.

So I think a good video. He gives a lot of quotes as usual but they obvious problem with quotes is that these themselves are deliberately made for public consumption or a poltical setting. The Zweites Buch was especially interesting as a source as it was never published (or even meant to be until after he won?). This makes that book (found in a safe) one of the best sources.

Well done TIK, and yes he is quite good at trying to get people hooked on his video to keep them watching. (nothing wrong with that, books do that too).

Chewbacca, thanks for this commentary-it certainly has value when considering this nuanced topic.