Indy this week answered (sort of) the question, " What if Pearl Harbor Never Happened."

I think the more interesting question is, “What if Hilter did not declare war on the US after Pearl Harbor.” Could Roosevelt pursue a “Europe First” strategy, or would he have been forced to focus most US resources on Japan?

The other monumental question is, “What would have happened if Lord Halifax had agreed to become Prime Minister?” It appears by his actions after Dunkirk (which might have gone worse if he was Prime Minister) that he would have agreed to a peace treaty with Germany.

Both of these questions come down to the on-the-spot decision of a single person.

On the behalf of the entire timeghost forum, very very heartful welcome to the forum.

A good question but it assumes that Hitler wasn’t going to declare war on the US. Remember at this point in the war, Germany hadn’t lost anywhere (army wise) and had defeated their biggest enemy France and they were now at war with the Soviets, so Hitler assumed they would win in the east (because of the terrible loses of the soviets in the finnish campaign where they could not finnish finland aka annex them) because the wermacht was undefeated at this point. So his idea was knock the soviets out and then focus west as he would have everything he needed for his war machine (the only problem he didn’t realise is that the soviet union is as big as pluto).

The second answer as to why Hitler may have declared war on the US can be guessed from the US declaring war on Austria-Hungary during ww1 (though no fighting took place) is as a moral booster for the japanese and to show the japanese that they were with them no matter what confirming their “alliance”.

Third, even if Hitler didn’t declare war on the US, what is stopping the US from declaring war on Germany (yes, it would require Roosevelt to convince the Senate a lot). They easily show the amount of boats sunk by the Germans call them American (if press censorship was in place, which I think it was) and declare war.

And fourth for hitler to not declare war, he would not have to be a megalomaniac.

What if Lord Halifax became the leader instead of Churchill can’t be said and has to be left to pure speculation. What I do know is that we wouldn’t have the awesome and memorable speeches by Churchill (blood, sweat tears speech, we shall never surrender, this was their finest hour)

Roosevelt did have a Germany first approach and then Japan.

I still think that once the US was in, they were in. I think Roosevelt would have pursued a Europe first policy and declared war on Germany since America was already doing the lend lease to a Britain and also the fact that Japan was part of the Axis powers. The Axis were at war with all the Allied powers, so the US would become an Allied power due to the circumstances.

There was a US fighting force sent to Italy in 1918 at the request of the Italians. The 332nd Infantry Regiment was sent in July and fought the Austrians until the Armistice with them on November 4. One Austrian soldier captured shared that they thought there were tens of thousands of US soldiers on he front. One reason is the 332nd purposely changed their clothing to give the enemy the impression that there were far more soldiers than one regiment.

Thanks for the welcome and your response.

My understanding it was the only time Hitler declared war before invading. Certainly, he was frustrated by the US’s lack of neutrality and wanted to have unrestricted warfare. But if he had resisted the urge, Roosevelt would have had a very hard time justifying not focusing most of the resources on Japan.
Yes, eventually, the U-boats would have sunk the “wrong” vessel, and with the US’s blood being up over Pearl Harbor, it would have been enough. But then, it might have been one or two years before the US focused on Germany.

Heck, it took the bombing of Pearl Harbor to get the US into the war, and Roosevelt had campaigned just a year before, saying he would not get the US involved in foreign wars. Famously, the USSR went to war with Germany, not Japan until right at the end of the war.

There was also significant anti-British sentiment in the US, no less than Joe Kennedy Sr., the ambassador to the UK from 1938-1940. Absent Hitler declaring war, I would think there would have been huge political opposition to opening a “two-front war” when Japan had attacked the US. I think it would at least greatly slowed US involvement in Europe and Africa and forced Roosevelt to go after Japan first.

“What if Hilter did not declare war on the US after Pearl Harbor.” Could Roosevelt pursue a “Europe First” strategy, or would he have been forced to focus most US resources on Japan?

Remember that the US Navy and Coast Guard were already in an undeclared shooting war with the Kriegsmarine in the Atlantic off the coasts of the United States, Canada, Newfoundland, and Iceland. Once FDR had the clear political will of the people behind him, he could have included the Germans and Italians in his request to Congress for a declaration of war anyway.

ndy this week answered (sort of) the question, " What if Pearl Harbor Never Happened."

I think the more interesting question is, “What if Hilter did not declare war on the US after Pearl Harbor.” Could Roosevelt pursue a “Europe First” strategy, or would he have been forced to focus most US resources on Japan?

Hi Karl, great question and a very heartfelt welcome to the forum. Let us know should you have any questions.

As for Hitlers war declaration. Weinburg who is a major historian has an excellent answer based on new research.

Japan would NOT have declared war on the USA if Germany would have declared war as well! Originally Japan would go to war in 1946 AFTER the Philippines had gained the planned independence from the United States. (And thus would make it easier to strike South, as the U.S. had to declare war over an ex-colony which had left themselves). Weinberg who is originally German does REALLY have a very global view of the war (as opposed to “Eurocentric”) which makes his points refreshing I think.

Edit/Note : The click-through is disabled but if you go to 1:06:40 you can get Weinberg. In the end of this videos many very interesting questions on what ifs are answered with unusual but convincing arguments. 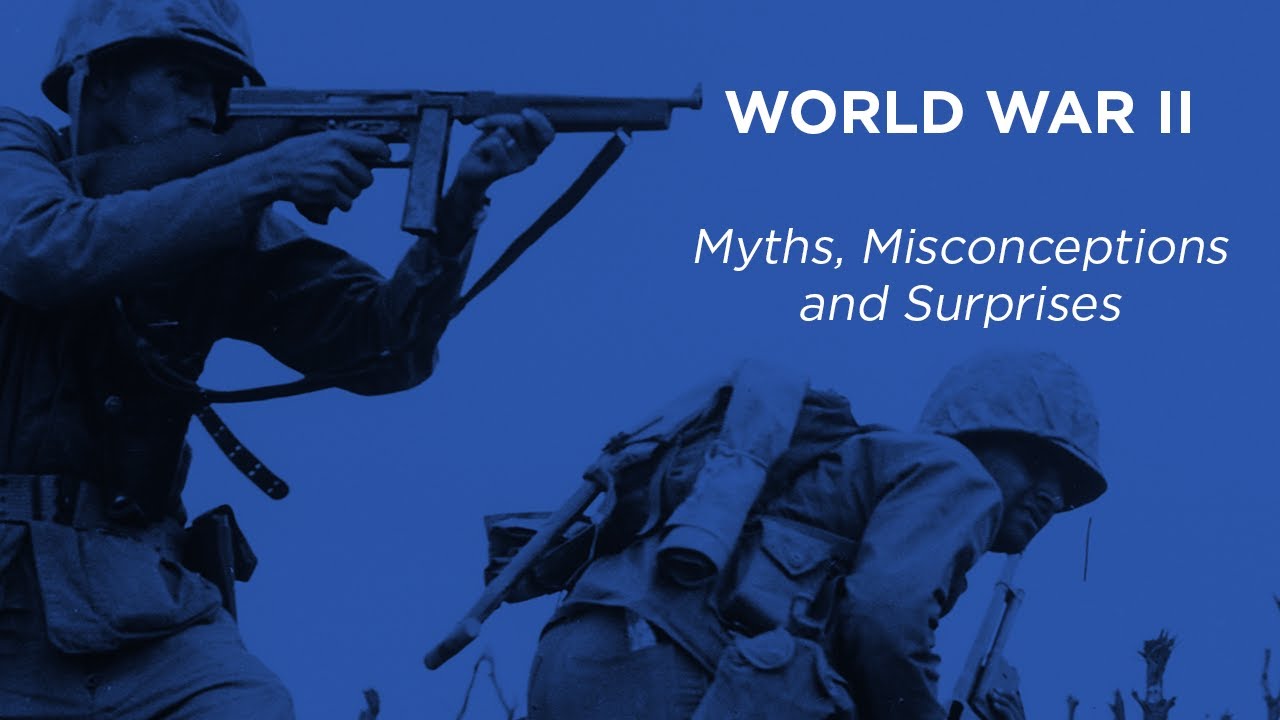 Had Germany not declared war on America after Pearl Harbor, we would have focused on the Pacific, and only declared war on Germany later when Germany would have kept supplying Japan. Had we not invaded Southern Italy in 1943, Hitler may not have called off the attack at Kursk.

Thanks, I watched that part of the video and that was a great and seemingly definitive answer by Weinberg (I will watch the rest of the video later). Basically Weinberg said that Japan only went through with Pearl Harbor with the assurance from Hitler that he would go to war with the US.

Now, what I don’t get is why almost no historians present it this way. It is usually presented that Hitler precipitancy declared war on the US in response to Japans action and not in concert with it.

Now, what I don’t get is why almost no historians present it this way. It is usually presented that Hitler precipitancy declared war on the US in response to Japans action and not in concert with it.

Very good point, Weinberg with his global view is is more interestingly. For some reason very few historians who study Hitler actually studied the options Japan had. Hardly any history book on WW2 includes the road to independence of the Philippine’s. As long as there is no war it just isn’t covered.

Like today back then the war was like playing chess on multiple chessboards which unlike real chess were all interconnected.

Weinberg did write an excellent book which is heavily used in this series. It describes the whole war and moves from strategic options and results across the board for the participants. It also was an old schoolbook of mine and a hefty read. It however does describe the challenges and go beyond the easy local read.

My personal view is that this book is just TOO complex for TV, Youtube or even popular book. Maybe some computer simulation can come close but outside academic circles it is not very popular.

There is a short version of it as well, it is quite good. Weinberg has a lot of original points and e.g. published the “Zweites Buch” of Hitler himself as Hitler didn’t do it. A fascinating guy.

PS Maybe also because of the internet access to the history of different parts of the World becomes easier, making it easier to see connections. 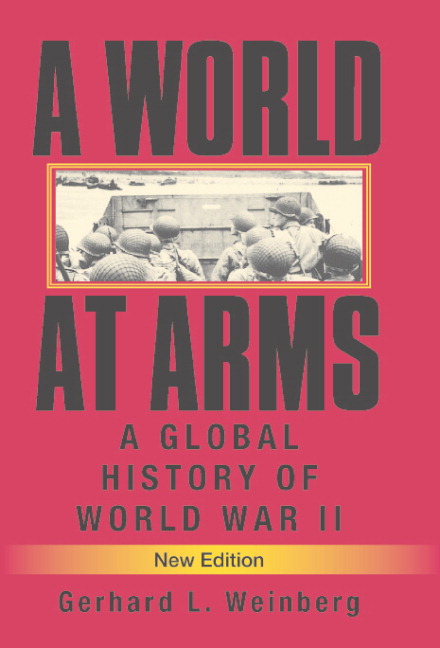 A World at Arms