When looking at the war against humanity and safety conditions for workers in factories and construction site for the period it would appear that the value of humans life was not that high.

Why then would Patton hitting soldiers who he believed to be cowards be a problem.

"It has come to my attention that a very small number of soldiers are going to the hospital on the pretext that they are nervously incapable of combat. Such men are cowards and bring discredit on the army and disgrace to their comrades, whom they heartlessly leave to endure the dangers of battle while they, themselves, use the hospital as a means of escape. You will take measures to see that such cases are not sent to the hospital but dealt with in their units. Those who are not willing to fight will be tried by court-martial for cowardice in the face of the enemy.

Welcome to the forum Sionra-thank you for posting this interesting question.

Here is an interesting video that speaks to Patton and his disposition that made him stand out from his peers. The discussion on Patton starts at the 11:00 point.

I find interesting the messaging that Patton new the enemy was vicious and he needed to be their ruthless ‘equal’ as a leader of a volunteer army. He understood the primary roll he had of motivating is soldiers to wage aggressive war and win. 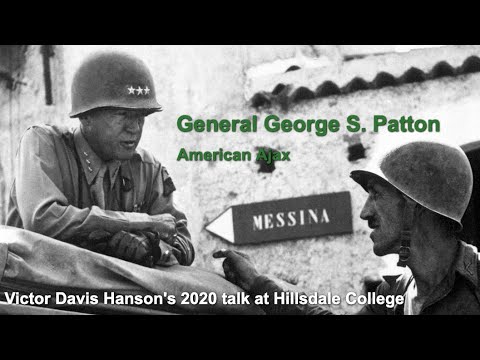 Welcome Sionra
The topic has to some degree been discussed earlier - follow the link below.
PTSD and other mental issues was not recogniezed at the time as illness, so I guess
many would, as Patton did, see mental issues as weekness. Also I think that it was when the story hit the press it spinned out of control, because of course the signs of PTSD was well know from veterans from WW1.

Furthermore I think Patton was the old school soldier, trying to motivate his troops by his personal presence in the frontline, and by being tough and harsh. More modern mamagement was already on the way (eg Eisenhower), so I guess Patton was unprepared and surprised by the public uproar.

In the Patton movie is says that Eisenhower overruled Bradley in deciding that Patton should go to Normandy. Eisenhower needed a tough solider, while Bradly was concerned for PR

Battle Fatigue in the Axis Forces

Watching the video I post would offer insights on a lot of this finn.

Well I finished The Whole video. Don’t know if I learned anything about PTSD but it sure was entertaining. I think he speaks well of societies weaknesses and why we fear and loathe practical men.

As for slapping a few soldiers, regrettable but understandable too. I am sure the Italians wished Rommel had only slapped a few of them rather than the ways he viewed them. Patton was always a victim of the narrative. Very successful generals learned to craft their own narratives. I think MacArthur and Montgomery were both examples. Good generals but always aware of media and the value of good press.

Lately it seems as if the narrative has become more important than the success. It has come way to far in that direction and I am afraid of the cost of rebalancing it out.

I’m glad you watched this video Dan. It really helps one realize that success at the highest levels of the military are much deeper than tactics on the battlefield. I find these points of leadership traits and the politics and media to be fascinating.

Another example of a warrior that was needed to win in a critical time, and then readily dispatched when success was near, was Churchill-for many of the same reasons that challenged Patton.

I found it fascinating how it was Stimson that save Patton. I would love to see the source for that but even a bad boy can have the right allies at the right time. The individuals who are willing to make hard decisions are always complicated and as was said, darker individuals. They are easy to identify through history by their actions. They are not evil but to outsiders they are sometimes stomach turning.

It reminds of the quote from Patton, the movie, where Bradley doesn’t want to celebrate Patton’s Messina victory because he thought Patton was just glory seeking and Patton replies it was time to consider how many casualties they would have had if they had slogged it out over the hills.

It was a fascinating video to watch , I’m sure that some of the information shared in the video will be in the scope of the normal videos further down the road for Indy.
There were some of what ifs in there that you can never bs sure about.

A commander that is too rough on the PR but by being a better commander is able to save more of his men , like getting bad press for shooting 2 donkeys to get his men out of a bad situation
I would think that a better commander in chief would pick the best commanders not based on I don’t like the guy
But that would be nature of the civilization we have build up , we are sending you to fight some bad guys but we want you to be nice about it and fight fair

Interesting insights, thanks both Dan and Sionra. You’ve picked up on a critical point. Stimson, the long time civilian leader to both Republican and Democrat administrations: Sec of War 1911-13, Sec of State 1929-33, and again Sec of War 1940-45, was able to understand the big picture goals of the land war and the value of Patton in it. As apposed to allowing Patton to be evaluated-discharged by his life military long peers (with agendas and motives of their own).
It affirms that in democratic free nations, civilian authority over the military is paramount to its success.

It reminds me of the line he mentioned by Colin Powel saying we will find the enemy, fix it, then kill it. They objected to the word kill.

The U.S. has become very adept at keeping enemy casualties off the news. We don’t like American casualties but the media loves to document how many we kill and the military goes to great lengths to not do that.

Pictures have shown they can change civilian views of a war. I think this can also apply to Generals. Remember the famous picture of MacArthur wading ashore. Very popular.

Perhaps in war time, taking tight control of media and messaging is the best hint at how serious govt is about winning…

Well there was huge control in WW1, somewhat less in WW2. I guess Korea was pretty much ignored and then the press relations began to evolve at least in the US. The press became far less trusting and more interested in manipulating opinion than in telling the best news they could.
Who knows what would happen in a new major war.