You’re sitting in a theater. Stage curtains are closed; lights are still bright; last-minute arrivals are scuttling crabwise to their seats. An orchestra begins to tune up.

You don’t see any musicians but you figure there must be some, because the tuning sounds come from different parts of the stage. This is a trick, though, because when the house lights dim and the curtains part, you realize you’re watching a motion picture of orchestra members taking their places.

They’re deliberate about it, just as they are in any auditorium. You view them rather dimly, mostly in purplish silhouette.

Presently a man halts in mid-screen and begins to speak to the audience. He says his name is Deems Taylor and that in behalf of Walt Disney, Leopold Stokowski and the Philadelphia Symphony, he welcomes you to a performance of Fantasia.

In his easy fashion he goes on to say it is unlike anything you have attended – that it is a concert of fine music complemented by pictures. The pictures, he explains, are not necessarily stories – they may be designs and forms inspired by the music; they are the sort of images which might turn through your mind if you just sat and listened to Stokowski and his men.

Then you see the conductor. He raps with his baton and begins Bach’s Toccata and Fugue in D Minor. The orchestra dissolves from view. The interpretive, impressionistic part of the picture begins. There are eight musical selections spaced by glimpses of the orchestra and brief announcements by Taylor. 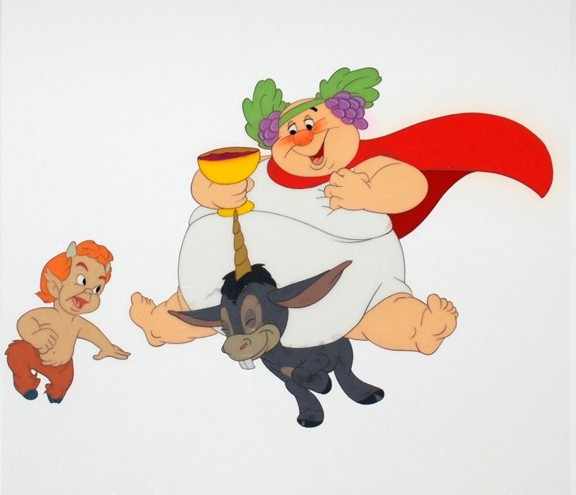 The material ranges from the reverent Ave Maria to the ludicrous Dance of the Hours, the latter burlesqued by a jungle ballet of hippos, elephants, crocodiles and ostriches. It goes from Beethoven’s Pastoral, garnished with Disney-esque centaurs and centaurettes and fauns and cupids, to Stravinsky’s Rite of Spring, a starkly primitive thing used to tell of the creation of the world, and of life development from single cells to the age of the great reptiles. Another eerie and rather terrifying number is Mussorgsky’s Night on Bald Mountain. Fantasia, as a whole, is not a program for the kiddies.

With ordinary equipment for sound recording and reproduction, the enterprise probably would have been just a movie novelty with the music of no more consequence than the score of the average picture. But Fantasia will be a musical sensation, and the visual part actually will be secondary. The dimensional, directional sound developed by Disney engineers and RCA compares with the best reproduction now available in about the same way modern Technicolor surpasses Thomas Edison’s flickering kinetoscope.

So far as I can learn, the main difference is that Disney and Stokowski have recorded on eight soundtracks instead of one, and from microphones scattered all through the instrumental sections of the orchestra. And reproduction of the music will come from 60 speakers variously placed in a theater instead of from one speaker suspended behind the screen.

Because this equipment is so expensive and take so long to build – especially with preparedness orders blocking production – Fantasia can be shown in only 12 theaters on the entire continent at one time. In the course of two or three years, it is possible it will have reached only 72 cities.

David Mendoza, when he was synchronizing music to the early sound films at the Vitagraph Studios, near Sheepshead Bay, used to explain that film scores merely emphasized the mood of a picture. Speaking before a luncheon session of the National Board of Review sometime ago, he startled the guests by admitting that the best motion picture score was the one that was so unobtrusive it wasn’t consciously noted by the audience.

His listeners weren’t started for long, for when they stopped to think of recorded picture music they had heard, they realized that Mr. Mendoza was right. He continued to be right until today. Now he isn’t so right, for Walt Disney is practically on top of us again with another of his unique films, and Mr. Disney, who always does startling things, has changed the rules of motion picture music. Changed them, at least, for the run of his Fantasia, which will be unveiled Wednesday night at the Broadway Theater, at 53rd St., and for successors to Fantasia.

The new Disney picture makes more fuss of its music. The score not only is essential to the drama or the comedy of his screen episodes, but without the score, the picture itself would be largely without meaning. In fact, without the score, there wouldn’t have been a Fantasia to write about this morning. For it was the music of eight distinguished composers that gave Disney the idea, as well as the material, for his picture. Disney’s work for Fantasia was confined to devising dramatic sequences to fit the music of his soundtrack and to interpret their impressions of the composers. It is a case of intentionally putting the cart before the horse, and for once – if the Disney judgement is still as sound as it always has been – that old trick will be called smart.

It all started several years ago when Disney made a short, with Dukas’ music, for Mickey Mouse based on an adaptation of the old fable about the sorcerer’s apprentice who thought his master;s tricks were so simple that he could work them while the sorcerer took a nap. Mickey started out just as the sorcerer would have begun, even equipped with the boss’ magic cap. He cast a spell over the magician’s broomstick, and the broomstick obediently continued to carry water to him until Mickey was floating pretty high. Then the half-baked, mousey magician decided he had enough water for that session, and he commanded the broomstick to stop. But the broomstick carried on, transporting water and more water, while Mickey frantically pleaded, begged, ordered and implored it to stop acting magical and get back to its sweeping. But the broomstick understood only one magic word for “stop,” and Mickey didn’t know that word. He didn’t learn it either, until the boss magician finally got doused out of his snooze and pronounced the proper hocus pocus.

Walt Disney was very much impressed with his work. He thought it was so good that he kept the shot and started to think about similar shorts that could be made. He thought so long and deeply about it that he got out of his own department and had to call on Deems Taylor and Leopold Stokowski to help him out. From that time on Fantasia was in the process of being born.

Fantasia (pronounced FAN-TAY-ZIA, middle syllable accented) will have Mickey Mouse as the sorcerer’s apprentice. But Mickey’s apprenticing, this time, will be only one of eight scenes in the film, and the only scene in which he will appear. The rest of Fantasia is composed of Disney-dramatized impressions of Bach’s Toccata and Fugue, excerpts from Tchaikovsky’s Nutcracker Suite, Stravinsky’s Rite of Spring, Beethoven’s Sixth Symphony, Ponchielli’s Dance of the Hours, Moussorgsky’s Night on Bald Mountain and Schubert’s Ave Maria.

And for the occasion Disney and his staff have devised a completely revolutionary medium of screen expression. The animated scenes were not drawn as ordinary Disney scenes have been drawn. Some of them were painted on glass, others on celluloid. Some of them were colored with oils, others in pastels. And all of them – 600,000 pieces, and 1,500 backgrounds, many of which move in an opposite direction to that of the animated figure – were photographed by a new 20-plane camera which produces photographic depth and a variety of hues and shades of color, among other complicated things. And, to make the whole thing more revolutionary, the music on the soundtrack was recorded not only before the picture was made but through an eight-channel recording device that picks up an individual section of the orchestra – it’s the Philadelphia Orchestra, with Stokowski handling the baton – when its playing must be highlighted to emphasize the animation on the screen.

The entire production is new, not only in the batch of new characters created but often in the interpretation of the music and in its technical arrangement.

Unless Disney has charged in the past year, we can expect another feast of whimsy when coolie-like toadstools dance to Tchaikovsky and when a flat-footed ostrich becomes a leaping ballerina. Also we might expect the combined sorcery of Walt Disney and Mickey Mouse to rob Mark Twain of one of his choicest epigrams:

Classical music is something that everybody raves about but that nobody wants to hear. 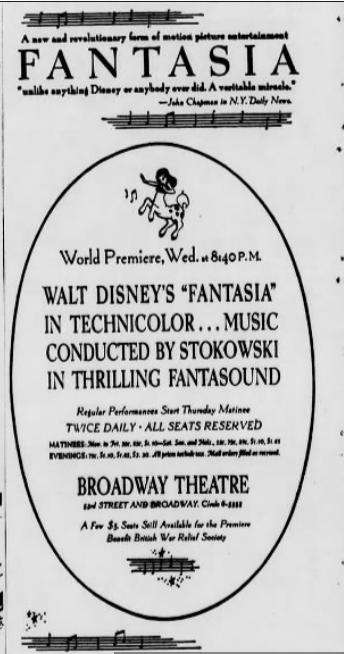 DISNEY MAKES MUSIC VITAL FACTOR IN FILM
…
‘Fantasia’ Producer Regards Melody Almost as Important as Character
…
The importance of films is becoming more and more recognized because of the work of men like Walt Disney, whose musical production Fantasia revolutionizes present conceptions of film possibilities.

Such dramatic exploration as Fantasia, which opens Wednesday night at the Broadway Theater presents, makes it apparent that the sound film is not a substitution for art or an imitation of other art forms. When it is handled with sincerity and inspiration, it is an art itself.

Music for films has always been a neglected factor in film production. Only in the last few years has it been given much of the importance it deserves. Formerly, producers didn’t realize the potential drama of using the music score almost as a character in the story, heightening the action. The public itself thought of the musical accompaniment to a picture only in the terms of whatever “theme song” it purveyed.

In Fantasia, the music and the pictures go together. The screen gives a vivid, dramatic and sometimes humorous interpretation of a group of famous symphonic masterpieces which comprise the score, played by the Philadelphia Orchestra under the guidance of Leopold Stokowski.

The fact that the film industry is yet young and unfettered by hidebound rules and regulations makes it an ideal vehicle for anything revolutionary.

Disney, always an advocate of the new, pointed the way several years ago in the first of his Silly Symphonies. It showed the first indications of the artistic possibilities in the union of sound and light.

Fantasia will come to the Broadway for an exclusive presentation, not being scheduled for subsequent showings at any other theater ion Greater New York.