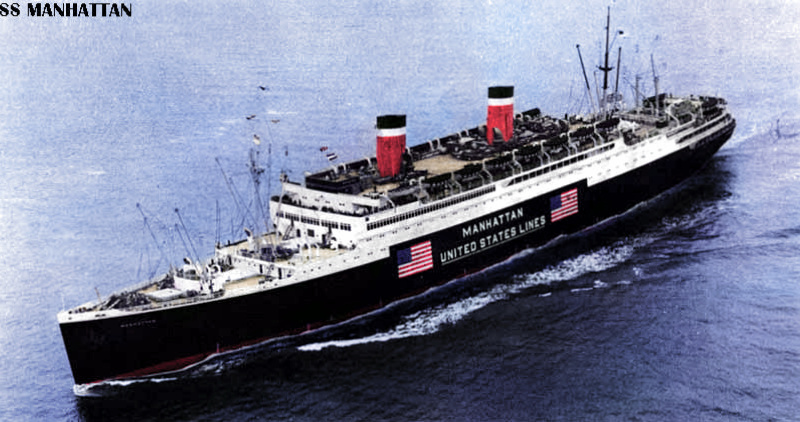 The 24,289-ton liner Manhattan. Renamed the Wakefield and taken over by the Navy as a transport, she caught fire while on way to East Coast port with 1,600 passengers, including women and children stranded ion British Isles and Éire. All were saved unharmed, but several crew members were seriously burned.

Aboard a U.S. warship on Atlantic convoy – (Sept. 3, delayed)
The 24,289-ton U.S. Navy transport Wakefield, formerly the American luxury liner Manhattan, burned within sight of this ship tonight and was abandoned on the Atlantic after her crew and 840 passengers were rescued by escort vessels.

A few hours later, the Wakefield was reboarded by a skeleton crew and the hulk was towed into an American East Coast port.

The Wakefield ’s passengers included American women and children who had been stranded in the British Isles and Éire since war began, construction workers who had been building American Army facilities in Britain and some United States Army officers returning to the United States for advanced technical training or to act as instructors.

None of the passengers was injured but several of the 750 crew members were burned, two seriously.

I could see the rescue vessels crowd so close to the burning ship that their paint was scorched and their hulls bruised as they bounced against the Wakefield to take off the passengers by means of rope ladders and improvised gangways.

Flames were discovered pouring from a passenger’s cabin shortly after 6 p.m. and soon were racing down the corridors of B deck. They defied control and two hours to the minute later, the skipper, Cdr. Harold G. Bradbury, United States Coast Guard, ordered her abandonment by the crew members who had risked entrapment to stay aboard and fight the flames.

Cause of the fire either was not determined immediately or could not be disclosed pending official investigation. Preliminary reports indicated that a passenger’s carelessness, perhaps in the handling of a cigarette, was to blame.

The Wakefield and her sister ship, the former Washington, were the second largest passenger ships in the American Merchant Marine and among the newest. The Wakefield was launched in 1932. Of American-built ships, only the America­ – now named the West Point – was larger.

Was in troop convoy

The Wakefield was in this convoy returning to the United States after a successful and uneventful crossing with the largest number of troops ever ferried over the Atlantic in a single operation.

Had she been alone and unescorted, the flames might have taken a heavy toll of lives. But a cruiser and two destroyers of the convoy escort were alongside the Wakefield within 10 minutes after she broke radio silence to message:

The rescue operation also was favored by a glassy sea and a clear sky.

If it had been a bad night with a rough sea, we couldn’t have taken off one-tenth of those people, not one-tenth.

Taken aboard one destroyer were 228 persons and most of the remainder were taken into the cruiser. The rescued so crowded the fighting ships that they were forced to sleep on deck under the few blankets and extra clothes available. Few of the rescued were able to save their luggage and possessions.

Reluctant to give up ship

Commanders of the rescue vessels pleaded with Bradbury to abandon his ship for an hour before he finally admitted that the fire couldn’t be controlled. Those of his crew who desired were rescued early, but most of them chose to remain with the captain in the losing fight.

Disaster struck quickly as this convoy neared the port from which it had departed a month ago and as the officers and members of the crew were congratulating themselves on a crossing with perfect weather and a complete absence of enemy interference.

It struck in full view of returning American nationals on other ships of the convoy.

Through the binoculars from this ship, just 1,000 yards away, could be seen the Wakefield crew running forward to their fire stations.

Within ten minutes, the Wakefield was shrouded in smoke.

The first message of important from one of the destroyers came:

Have taken off all except those of the crew that wish to keep aboard.

It was followed later by another:

There is a nucleus of a crew still aboard. The engines are still okay and they think they can bring her [the Wakefield] on in.

Fifteen minutes later, still reflecting Bradbury’s confidence that he could save his ship, came a message from the cruiser:

The captain has asked us to push off. I estimate that 300 to 400 crew members are still on board manning the hoses. The captain hopes to be able to get the ship into port.

But 10 minutes later, her captain was back on the radio. He said:

The fire seems to have broken out with new intensity. We had better stand by again.

One of the destroyers has shoved off but we are still alongside. We are riding easily but losing a little of our paintwork.

The fire apparently is out of control.

There followed a long silence until at 8:20 the cruiser captain was back with:

They are now abandoning ship and coming aboard.

Many of the crew members stayed aboard until it no longer was possible for the rescue ships to maneuver alongside.

Later, when the intensity of the fire had abated somewhat, Bradbury led a special firefighting party back aboard the Wakefield and they then succeeded in getting the flames under control, the Navy said.

Tugs and salvage craft were summoned and they safely towed the bulk of the ship to an Atlantic port.

They even rescued a cat from blazing Wakefield

The story of the escape of 1,590 persons from the naval transport Wakefield was expanded today as Coast Guard members of the crew arrived here to tell tales of individual and collective heroism during the inferno aboard the luxury liner converted to war uses.

One of the rescuers in the Morro Castle disaster in 1934, Lt. Joseph Mazzotta, took pride in the fact that valor, speed and efficiency had not only prevented the loss of a single life when 25-foot flames swept the Wakefield, but was so effective that:

We even saved a cat.

Lt. Mazzotta, 34, and a resident of Cape May Court House, New Jersey, was overcome once himself before the order to abandon ship was given at 8:15 p.m., an hour and 45 minutes after the automatic alarm first sounded, but he considered that a minor mishap.

Some of the boys were overcome several times and still managed to fight it off and keep going.

Lt. Henry P. Knickern Jr. of Manhattan told how 60 persons in sick bay were taken to safety without ill effect and Ens. John Mahrley, 31, of St. Paul related the rescue of six overcome passengers from a lower deck.

Charles Albert Buchert, Carpenter’s Mate 1st Class, of Glennside, Pennsylvania, was cited for pulling three passengers who had no gas masks from an escape hatch, while Richard Foutter, gunnery officer, hailed all the passengers for keeping cool in the midst of soaring flames.

To Ens. Mahrley, the most remarkable phase of the holocaust was the manner in which, he said:

…three members of the crew who were trapped in a laundry escaped by forcing a watertight door below water level and made their way to the upper decks.

Skipper of Wakefield hoped to be farmer

Cdr. Bradbury, born in Maine, attended Oregon Agricultural College, Corvallis, Oregon, for a year before heeding the call of his country, he switched to the United States Coast Guard Academy at New London. He graduated from the academy in 1918 and has been an officer of the Coast Guard ever since.

Returning to sea, he commanded the Coast Guard cutter Shoshone and making trips to the Aleutians, was in charge of the Bering Sea Patrol in the first half of the summer of 1940. He decommissioned the Shoshone at the Brooklyn Navy Yard, from which the vessel went to Great Britain under the terms of the Lend-Lease agreement. Then he went into the transport service for the Navy, and commanded one other big vessel before the Wakefield.

The loss, at least pending repairs, of the transport Wakefield, formerly the liner Manhattan, is a blow to our maritime strength at a time when every ship is needed to transport men and munitions. There would be no use denying that loss. Yet there is great consolation.

The warships accompanying the Wakefield performed the work of rescue in a fashion worthy of the traditions of the United States Navy. Because of their prompt and efficient work, more than 1,600 passengers and members of the crew were taken off in mid-ocean without loss of life. That is a first-rate achievement and brings honor to the officers and men who managed it.