H. R. Knickerbocker, noted correspondent, has just returned to the United States after covering the war in the Pacific for the last six months. He arrived in Hawaii shortly after the attack on Pearl Harbor and covered the ensuing battles in the Netherlands East Indies and down to Australia. This is one of the articles written from the vast amount of material he gathered. 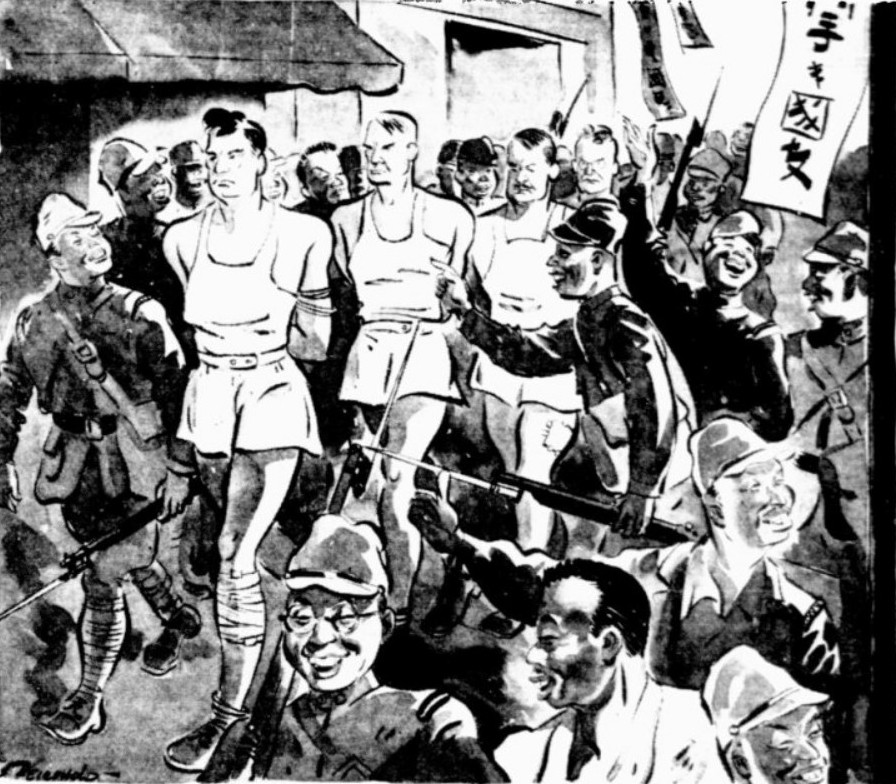 “Every imaginable humiliation, indult and injury is being heaped upon American and other white prisoners by the Japanese…”

San Francisco, June 23 –
American officers are being paraded by the Japanese through the streets of Manila in their underwear to the jeers of the Jap soldiery. The fate of the women captured by the Japanese is not to be described except in medical journals.

When our Army was marched captive from Bataan to Manila, all who fell out or faltered were bayoneted. It is over 100 miles from Bataan to Manila. The captives were marched 20 miles a day under the tropic sun. Many fainted and the Japs carried out their promise of torture and death.

Every imaginable humiliation, insult and injury is being heaped upon American and other white prisoners by the Japanese, who are determined to reduce our people to the condition of coolies. The Jap general who received the first offer of surrender from our starved, exhausted, heroic troops on Bataan flagrantly insulted Colonel Williams, the American officer who carried the offer, fired pistol shots around his feet and refused to consider the terms of capitulation until General Edward L. King himself went in person to lay down his arms.

The Philippines fell to the Japs because of starvation and neglect, and not because they suffered military defeat. Our Army of Bataan, perhaps the bravest in our history, would be fighting yet if it had only had food, but it had nothing, and it is the bitter feeling of the survivors of those five bloody months that they were let down.

Every soul on Bataan had the most profound faith that relief was coming from the United States. Their most popular song, to the tune of “Camptown Races,” was:

They kept singing this sing until that tragic day when the infantry rose to advance and the men found they could not walk 50 feet.

For many reasons, the Army of Bataan will go down in history, but the most remarkable feature of its five-month battle was that it fought it without planes. This does not mean that the troops had air inferiority; it means that they had no air force whatsoever. It was wiped out the first day of war.

When General Wainwright surrendered, he had precisely two damaged pursuit planes and one training plane. The Japs took full advantage of this, and there was never a moment from Dec. 8 to April 9 when the troops were out of the sound of Jap war planes.

In the history of the present war, only Malta has suffered more continuous bombardment than that poured upon our troops in Bataan and Corregidor. Their lack of air support handicapped them exactly as though each soldier had had his right arm tied behind his back.

All these observations are the result of six months of travel throughout the Southwest Pacific battle area and this with the few survivors who got out before the Jap flood overwhelmed our men.

The option these survivors have of the Jap Army is of value for our guidance in the battles to come.

They say the Japanese are possessed of fanatical willingness to die, and the tales of their suicidal exploits are not overdrawn. But this quality is not a military advantage unless the Jap troops are so numerous that the loss of men will never be felt. This is not the case with Japan. She has only 80 million people to draw upon.

No list of the military merits of the Japs should obscure the expert judgment of American officers who fought them in Bataan. They say that the Japs are overrated.

They have the courage of suicidal weasels, but they borrowed from the Germans that same lack of individual judgment and initiative which has so often been called the single but sometimes fatal fault of the German military leadership.

They fulfill their orders perfectly but after the order is fulfilled, they seem not to know what to do. According to men who were there, every second of the five-month Battle of Bataan, the Japs could have taken Bataan several times if they had possessed imagination.

For example, at the beginning of the campaign, it would have been possible, so they say, for the Japs to have landed on the Bataan Peninsula behind the American lines.

Later, they tried it and failed in their famous attempt when about 1,000 Jap soldiers stripped to their singlets and swam ashore. They were aided by life preservers from the American steamship Merritt which took American relief supplies to Japan for the succor of the victims of the 1923 earthquake. These soldiers were justly doomed, trapped in caves and destroyed.

Furthermore, the Jap contempt for death leads them to acts of sheer folly, as when, in their attack on the Abucay Line, the first line of defense established in Bataan, they sent assault troops to jump on the American landmines and explode them with their bodies instead of doing the same thing more cheaply with artillery fire.

As each found his mine and jumped upon it, he shouted “Banzai” just before his body was atomized by the detonation of two pounds of high explosive directly under his feet.

All that could have been done by artillery, but the Jap command apparently considered one of their soldiers cheaper than a shell. In this spirit, they also sent their men to be living bridges cast over the American barbed wire entanglements. Two lines of Japs advanced and, also shouting “Banzai,” flung themselves across our wire. A second wave of Japs then stepped on this carpet of writhing, tortured bodies to try to reach our trenches.