Tech’s deflation is complete this season except for two suicide spots on the schedules held by Notre Dame and Pitt.

Other than those two overambitious gestures, the Tartans will operate on a strictly Class B level in keeping with the caliber of the present squad.

Westminster is the opening assignment, Saturday, in Pitt Stadium, for Coach Dr. Eddie Baker’s second Tartan production, and it shapes up as a pretty even match.

The Tartans are handicapped not only by the almost complete absence of scholarship players, Center Henry Holets being the only remaining Steffen Scholarship grider, but accomplished little in the spring and pre-season fall training periods.

The spring session was a complete bust, as Coach Baker called off drills after two short weeks of attempting to round up enough players for scrimmages. Also, players have been late in reporting this fall, and the squad reached near full strength only last week.

In fact, the only ray of sunshine in the whole picture is the forward passing wizardry of sophomore Virgil Cantini. Coach Baker believes Cantini is the best passer to come under his wig in a dozen years of coaching, and Virg is sure to play a major part in any success the Tartans might achieve.

Although Westminster hasn’t been too strong even in minor competition the past few years, Coach Grover Washabaugh reports the current band of Titans is the best since he took over the coaching controls four years ago. Thus, Saturday’s game should give a pretty good line on just how far Tech may be expected to go this season. 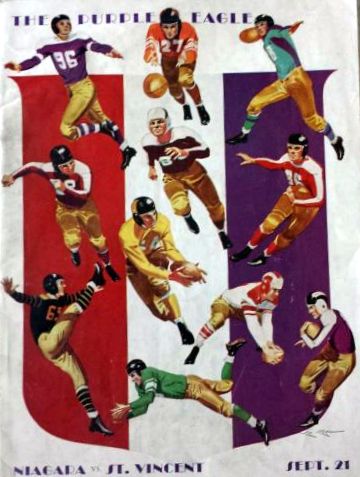 Friday night, the Duquesne Dukes make their second start of the season – reverting to their familiar night-riding role to take on Joe Bach’s Niagara eleven.

There is considerable local interest in this game, for Bach is well-known to local fans – having coached the Dukes back in the early '30s. This will be his second trip to Niagara having directed his Purple Eagles against the Dukes in Forbes Fields three years ago in a game that was first postponed by heavy snowball and cold, and then was finally played under the worst kind of weather conditions.

Duquesne copped the decision that day, 15–6, as Coach Clipper Smith sang his swansong – paving the way for Assistant Buff Donelli to step into the lead coaching role the following season.

Bach has had great success at Niagara, but he would likely be happy to trade all that for a victory over Duquesne.

In Morgantown, W. Va., Bomber Bill Kern sends his West Virginia Mountaineers to the firing line Saturday with Waynesburg serving as a good, tough warmup target. The following week the Mountaineers face its most important objective of the season – Navy, rated one of the three leading contenders, along with Fordham and Colgate, for Eastern honors.

Geneva, happy to hold a favored Youngstown eleven to a scoreless tie in last week’s opener, goes to Buckhannon, W. Va., in search of a victory at the expense of West Virginia Wesleyan, Saturday, The same afternoon, Grove City is host to Clarion; Theil journeys to Edinboro.

Two district elevens are campaigning in upper New York today, with St. Vincent getting off to a fast start with Niagara, at Niagara Falls, while St. Francis battles Canisius at Buffalo.

The aerial act of Dick Detzel and Mike Pollack accounted for the lo be score of the game just 13 plays after the opening kickoff. The scoring drive carried 66 yards, with Detzel first hurling to Pollock for a 27-yard gain and then the act was reversed to climax the drive with Detzel on the receiving end of a 12-yard touchdown pass.

Detzel’s passing, running and kicking were outstanding throughout the game. A big, rough Bearcat line held Niagara at bay all the way – with Joe Bach’s Purple Eagles never getting any closer than the St. Vincent 20.

It was St. Vincent’s third straight win over Niagara.

’Stars’ may ride bench –
DONELLI MAY SHAKE UP LINEUP FOR NIAGARA

Vowing, “I’m certainly disillusioned with pur so-called first team,” Coach Buff Donelli today was toying with the idea of giving Duquesne’s sophomores and juniors a chance to show what they can do against Niagara University’s Purple Eagles Friday night at Forbes Field.

The Buffer philosophized in reviewing his Dukes’ dismal performance in scraping past little Waynesburg College, 14–2, in last week’s opener:

Seniors and veteran stars only give the coach a sense of false security.

At least sophomores and juniors want to play football and that’s more than I can say for our ‘stars’ in view of that sad exhibition against Waynesburg.

The Hilltop leader stated with definite conviction in his voice:

I can promise something different out there this Friday night.

Asked if any of his players had handled their assignments in a fashion worthy of praise, Coach Donelli commented:

The only fellow who looked good to me was Brue Jackson [team trainer] who did a splendid job of handling the water bucket and attending to his other duties. I think I’ll start Brue at Quarterback against Niagara.

The Duquesne mentor will postpone definite decision on lineup changes until later in the week after he has had a chance to see how his boys react in scrimmage drills.

He reported in checking over scouting reports in this week’s foe:

The Buffer who personally scouted the St. Vincent-Niagara game said:

Joe Bach has a good young team coming up at Niagara – a team that lost to St. Vincent by one touchdown chiefly because of inexperience.

He was particularly impressed by the play of Gydo Filicetti, a fine sophomore halfback:

…who will give our boys lots of trouble, particularly on returning punts.

Lightweight backs to start for Tech

In the Carnegie Tech camp, Coach Dr. Eddie Baker today was grooming a pair of lightweight halfbacks for starting assignments in Tech’s opener with Westminster at Pitt Stadium Saturday.

With star sophomore Virgil Cantini nursing a leg injury, Coach Baker has virtually decided to advance Jack Fritz, 148-pound sophomore from Blasdale, NY, to the starting left half post. He will probably pair with little Joe Pash, elusive 155-pound letterman who is the fastest man on the squad.

The Fritz-Pash halfback duo would give Tech a pair of the lightest halfbacks in the nation and certainly should be a tipoff that there’ll be some changes in the standard Pitt power attack usually favored by Dr. Baker, an exponent of the Sutherland-coaching school.

Jack (Bulldog) Stetler, slashing junior halfback from Glenshaw, is pushing his way to the front in Pitt drills and it is not at all impossible that he will win the starting left half job over the ailing veteran Edgar Jones.

Stetler has been acting up in whirlwind fashion, and Coach Charlet Bowser reports “right now he looks like our regular left half.” The driving Panther junior last year was credited with the longest run of any Pitt ball carrier – dashing 78 yards against Duke to make the Panthers a threat in that game right down to the final whistle.

He played second fiddle to Jones last year, but with added experience has a good chance of taking the play away from old Special Delivery. Although handicapped by small hands, he can throw a pretty fair pass, and, while no speed demon, he more than makes up for this in his driving, slashing style of running.