Struck in the heart by a German air bomb fragment, Captain Robert M. Losey, assistant American Military Attaché for Air, was instantly killed in Dombås, Norway, yesterday, when German bombers swooped down on this important railroad junction in the Dovre Mountains in an effort to smash its railroad connections and stop an Allied advance towards both Trondheim and Oslo. 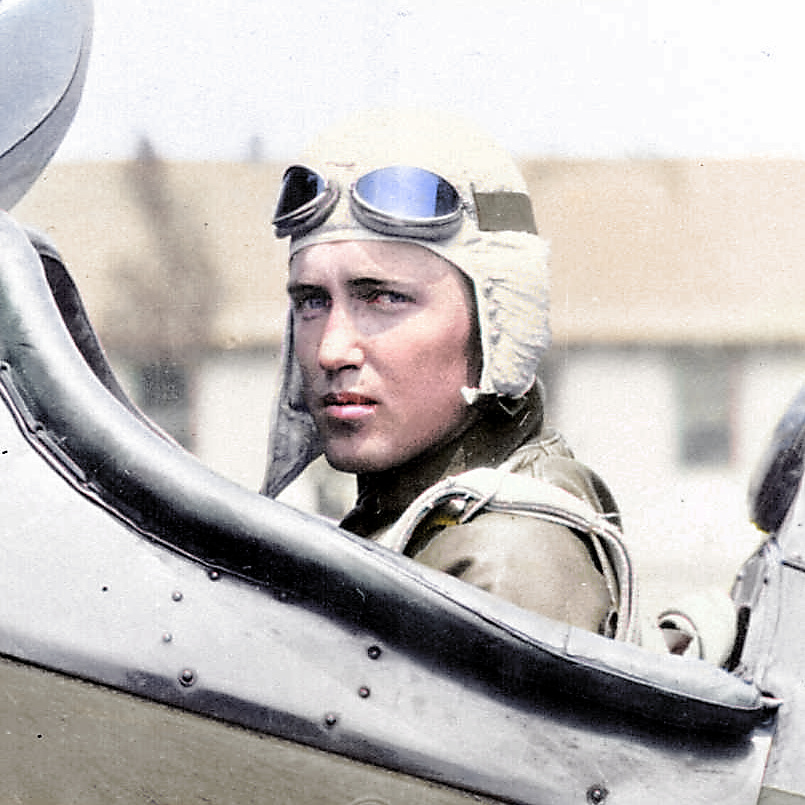 The death of Captain Losey, who is the first American official to be killed in this war, was reported today to Frederick A. Sterling, United States Minister to Stockholm, in a brief telegram from Major Yssum of the Norwegian Army and has since been confirmed from other official sources.

According to the available information, Captain Losey was standing at the entrance to a bomb-proof tunnel shelter in Dombås, presumably, observing the German attack, when a bomb exploded near by, and a small fragment penetrated his heart. Those standing behind him in the tunnel itself escaped injury.

Dispatches from Europe and the Far East are subject to censorship at the source.

According to reports from the Allied Expeditionary Corps in Norway, two of the raiding planes were shot down by the anti-aircraft guns of the combined Allied and Norwegian forces which have occupied the place.

One incidental reason for Captain Losey’s visit to Dombås is supposed to have been his attempt to help find some seventeen persons, including eight children, of the American Legation personnel of Oslo. They had left Oslo in automobiles on April 9 and had just crossed the Swedish frontier on the way to Stockholm.

They included Mrs. Raymond E. Cox, wife of the Legation Secretary; Mrs. T. O. Klath, wife of the American Commercial Attaché; Mrs. Austin R. Preston, wife of the American Consul General; Mrs. Easton T. Kelsey and Mrs. Brigget A. Perkins, wives of American vice consuls, as well as Mr. and Mrs. A. G. Ronhovde, Rutgers University professor, and their 15-month-old daughter, who were in Oslo and had joined the party. They had gone through the Lillehammer air alarm, had been in Dombås Friday and had since traveled for several days by railroad, bus and sledge until, under guidance of Lieut. Comdr. Ole. O. Hagen, the American Naval Attaché, they finally reached Fjällnäs in Sweden.

The body of Captain Losey will be likewise transported from Fjällnäs, where American authorities will take charge of it.

Captain Losey, a graduate of West Point, had just come from Finland with Major Frank B. Hayne, the Military Attaché. But while Major Hayne was attached to the legation in Stockholm, Captain Losey had orders to report to Mrs. J. Borden Harriman, the American Minister to Norway. He had been in Norway since the outbreak of hostilities, and had just returned there from a short stay in Stockholm.

The German Foreign Office today was notified of the death at Dombås, Norway, of United States Assistant Military Attaché Captain Robert M. Losey, who was killed when Germans bombarded an important rail junction on the road between Trondheim and Lillehammer. The office expressed deep regret.

It was observed, however, that Captain Losey was in a war zone, from which the Germans had repeatedly warned off noncombatants, and although his death is sincerely deplored here, it is again emphasized that he was at this highly dangerous point at his own risk.

The Germans broadcast a warning on Saturday that they would intensify their warfare in any district where Allied troops had landed or put in an appearance. It is to be supposed that the town where Captain Losey was killed had become such an area.

Captain Robert M. Losey, American Assistant Military Attaché for Air, who was killed by a German air bomb in Central Norway yesterday, is the first American official to be killed in the European war.

The report of his death was received by the State Department today from Frederick A. Sterling, the United States Minister to Sweden, but pending more information on the exact circumstances the Department was not prepared to say whether it might lead to a diplomatic incident or have more serious repercussions. Many officials were inclined to believe that it would not, if the officer were found to have been acting in line of duty and no complicating circumstances surrounded his death.

The Department immediately instructed Mr. Sterling to obtain all possible information on the circumstances of Captain Losey’s death.

The attaché had gone into Norway from Sweden in an effort to reach a group of Americans, wives and children of United States Foreign Service officers in the legation at Oslo, who had been staying in a hotel a few miles above Oslo and were on route to Sweden over the northern road from Lillehammer, Norway.

Captain Losey was killed at Dombås, according to a brief message received by Mr. Sterling from a Major Yssum who was understood to be a Norwegian Army officer. This message, which was filed from the town of Opdal, read as follows:

American Military Attaché Captain Losey was killed by German bomber plane at Dombås today. Inform Mrs. Harriman. He will be sent tomorrow, Monday, via Roeros to Fjällnäs, where instructions from legation are awaited.

Mr. Sterling at once asked Lieut. Comdr. Ole O. Hagen, American Naval Attaché in Oslo, who had crossed into Sweden with the refugees, to receive the body at Fjällnäs and await further instructions.

In announcing the death, Secretary of State Cordell Hull expressed his deep regret but said that any action would await the ascertaining of more facts. He probably was undertaking to locate and give aid to the Americans who were seeking to go to a place of greater safety, Mr. Hull said.

Captain Losey obtained master’s degrees in meteorological aeronautics and aero-engineering at the California Institute of Technology in Pasadena several years ago. Professors described him as “perhaps the most brilliant student who ever attended the school”.

In a letter received last week from Helsinki, Finland, by his sister, Mrs. Margaret Lee of 38-73 Douglaston Parkway, Douglaston, L.I., Captain Losey wrote that he was well and that he had seen “a lot” of Russian bombing planes but no bombs during his brief stay in Finland.

The letter, which bore a Helsinki postmark of March 6, six days before the Soviet-Finnish armistice, was forwarded to Mrs. Lee through American diplomatic channels. It also said that the Russians had lately refrained from bombing Helsinki “for some unknown reason,” but that the rest of Finland had been severely bombed.

Captain Losey sailed for Helsinki on Feb. 3 on the Swedish-American liner Drottningholm. He arrived at Göteborg, Sweden, on Feb. 14, according to a previous letter he sent to his sister, and from there proceeded to his post with the American Legation in Finland.

The only son of the late Rev. Leon A. Losey, a Presbyterian clergyman, and Mrs. Nellie Moore Losey, he was born at Andrew, Iowa, on May 27, 1908. After Captain Losey’s father’s death at Perry, Mont., in 1923, his mother and her two children moved to Trenton, N.J.

Young Losey was graduated from the Trenton High School in 1924 and spent a year working for the New Jersey State Highway Commission before being appointed to the United States Military Academy in 1925. At West Point, he played polo and was on the staffs of several cadet publications.

He was graduated among the first 100 of his class in June, 1929, and commissioned a second lieutenant of field artillery. In September of the same year, he was detailed to the Air Corps. After receiving ground school instruction at Brooks Field, Texas, he was assigned to the Air Corps Advanced Flying School at Kelly Field, Texas, being graduated there in October, 1930.

For the next four years, he was on active duty at Mather Field, California, and Barksdale Field, Louisiana. In 1934, he was assigned to take graduate work at the California Institute of Technology, from which he received a Master of Science degree in meteorology in 1935 and a Master of Science degree in aero-engineering in 1937. From 1935 to 1936, he served as meteorological officer at March Field, California.

He was on duty with the Training and Operations Section of the Air Corps at Washington, D.C., from August, 1937 to January, 1940, when he was assigned as assistant military attaché for air to the United States Legation in Finland.

Captain Losey’s mother died at Washington, D.C., in February, 1939. His sister is the wife of Morris Lee, assistant director of public relations for the National Association of Manufacturers.

Thank you very much for this story. I did not know this. A tragic death by all accounts

Very much so. This week saw some tragedy in the States as well. I’ll be posting about that soon. May Robert Losey rest in peace.

P.S. Tell me your thoughts about the news article.

Well the article was very informative and detailed. I am very surprised to read all the regrets and diplomatic talk when you know the total war between German and US which will come. To me it is not yet a total war - maybe apart from Poland

I am very surprised to read all the regrets and diplomatic talk when you know the total war between German and US which will come.

Even Nazis know when they goof up, though they had every incentive to defend the incident.

It was observed, however, that Captain Losey was in a war zone, from which the Germans had repeatedly warned off noncombatants, and although his death is sincerely deplored here, it is again emphasized that he was at this highly dangerous point at his own risk.

Now, in your opinion, what do you think of the writing style? How different was it from modern-day newspaper reports? Here’s another article written a few days later reporting another infamous tragedy:

The Associated Press (April 24, 1940) [contains the word “Negro”] 100 to 150 Negroes Die in Fire at Natchez; Trapped as Flames Sweep a Dance Hall Natchez, Miss., April 24 ― Sheriff Hyde R. Jenkins said that at least 100 Negroes were burned to death in a dance hall fire here late last night. Others estimated the death toll at possibly 150. R. E. Smith, managing editor of The Natchez Democrat, said that the bodies were “piled up like cordwood.” Almost all the Negro population of Natchez ga…

In 1987, the citizens of Dombås erected a monument in Losey’s honor.