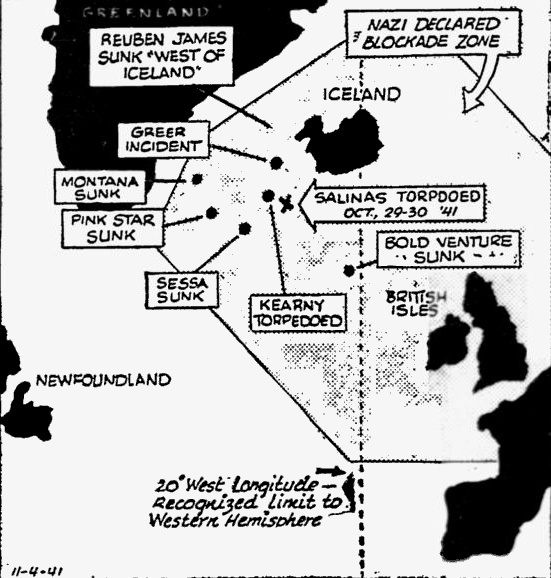 America’s losses in life and property in the Battle of the Atlantic grew by leaps and bounds today.

The Navy announced that the naval tanker Salinas was hit by a torpedo southwest of Iceland the night of Oct. 29-30, suffered damage but no casualties and proceeded to port.

The Navy practically abandoned hope for 95 missing crew members of the torpedoed destroyer Reuben James and estimated the death toll at 97, including the two known dead.

12 lives were lost in the crash of a Navy bomber on a mysterious mission in the “Atlantic Ocean area,” the Navy announced.

Washington, Nov. 4 (UP) –
The Navy disclosed today that another American naval ship – the big tanker Salinas – was torpedoed and “seriously damaged” southwest of Iceland the night of Oct. 29-30.

There was no loss of life or serious injury among the Salinas’ complement of 107 officers and men. The ship reached an undisclosed port safely. She was the fourth U.S. naval ship to be attacked southwest of Iceland by submarines.

The others were the destroyers Greer, Kearny and Reuben James.

The Navy did not reveal the extent of the damage to the Salinas, because it would be:

…of no value except to the Nazis.

That is the second time that the Nazi government has been directly mentioned in an official U.S. naval communiqué regarding an attack on an American naval ship.

The tanker was under the command of Commander Harley F. Cope, 43, graduate of the Naval Academy after World War I.

The number of minor injuries on the tanker was not revealed, the announcement merely stating that there were no dead and no “seriously injured” among her complement.

The Navy’s announcement was preceded by several hours by a German communiqué claiming successes in attacks on Atlantic convoys. The Berlin High Command claimed the sinking of a destroyer and 11 merchant ships from a single convoy but gave no details as to time, place and nationality.

The Salinas is one of the Navy’s largest auxiliary units. She has a capacity of 11,145 tons of oil and was traveling in a convoy when attacked. Presumably the Salinas was carrying oil for either the United States Atlantic Patrol or for the American base in Iceland. There has never been any indication that American naval vessels are operating east of Iceland to Great Britain.

The text of the Navy’s announcement:

The Navy Department today announced that the USS SALINAS (AO-19), naval oil tanker, has reached port in safety despite serious damage incurred when the vessel was torpedoed without warning during the night of Oct. 29-30, 1941, southwest of Iceland.

There was no loss of life or serious injury to personnel.

Announcement of the attack was withheld until the vessel reached port in safety. No details of the damage will be released as it will be of no value except to the Nazis. The ship was in a convoy when attacked, which was about a day prior to the attack and the sinking of the USS REUBEN JAMES (DD-245).

The USS SALINAS was built by the Newport News Shipbuilding and Drydock Co. for the U.S. Navy and commissioned Dec. 16, 1921.

The ship is of 16,800 tons displacement and carries a complement of 107 men; length 463 feet and beam of 60 feet. The ship is armed with two 5-inch guns and a battery of anti-aircraft guns. The commanding officer is Commander Harley F. Cope, USN.

Berlin, Nov. 5 (UP) –
A spokesman commenting on the torpedoing of the American naval tanker Salinas, said today:

The German government’s reaction to these cases is always the same: Whoever sails for Britain sails to his death.

The spokesman read to the press extracts from a number of American criticisms of Secretary of State Cordell Hull’s criticism of Finland including those of former President Herbert Hoover, Senator Bennett C. Clark (D-MO) and the New York Sun.

There are at least some decent Americans.

These few extracts show the world that it is not right to identify the entire American people with the policy of Roosevelt and the Jewish men behind him and that there are Americans who wish to have nothing to do with these gangster and ghetto manners.