Continuing the story of the Canadian Corps overseas.

“Reader’s Digest: The Canadians at War: Volumes 1 & 2” ISBN-10 0888501617 (A compilation of articles ranging from personal stories to overviews of Canadian involvement in a particular campaign. Contains excerpts from a number of more obscure Canadian books written after the war, published 1969)

Backtracking to May 1940, the Canadian government came to the decision to form a “Canadian Corps” and plans were drawn up to send the 2nd Division to join the 1st, there was also approval for the mobilization of 3rd Division at home. Later that month, the government gave the go ahead for a 4th division to be created.

By early September 1940 it appeared that the invasion might come at any moment; and on the evening of the 7th (they day the Germans made their first great daylight air attack on London), GHQ Home Forces sent out the codeword ‘Cromwell,’ signifying that it was imminent. Next day the 7th Corps was placed on four hours’ notice to move. On the 11th Churchill solemnly warned the country that the next week or so might rank with the greatest days in British history. But the invasion did not come. We know now that Hitler had fixed the landings for the 21st of September, but that a week before the day he postponed it. On the 17th he postponed it indefinitely, and on the 12th of October the decision was announced that it would not take place before the spring. The failure to defeat the Royal Air Force had been decisive.

In Canada the Dunkirk crisis had produced a large expansion of the war effort, and the government offered Britain every assistance an ill-prepared country could give. Speaking specifically about the Canadian Army, ground troops were requested for the Iceland, Bermuda, and Jamaica garrisons, which were promptly provided, and the 2nd Canadian Division was immediately prepared for departure ahead of schedule . A brigade of the 2nd Division had been sent from Canada to Iceland, and the British government proposed that the whole division should go there. McNaughton, however, was able to prevail over Churchill to have that idea scrapped. The 2nd Division would operate with the 1st. A good part of the 2nd Division arrived in Britain in August 1940. The troops in Iceland, except for one battalion which remained over the winter of 40-41, rejoined their unit in November, and the final elements of the 2nd Division arrived over Christmas. 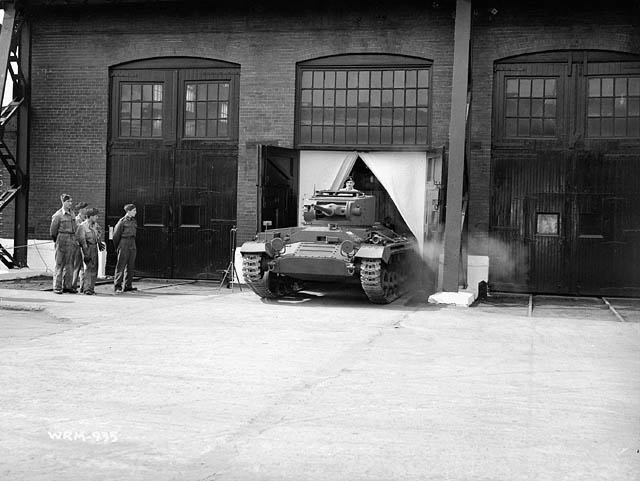 (The first tank ever built in Canada, a Valentine Mk6 (basically a Mk4 with some North American hardware) emerges from the Canadian Pacific Railway Angus Shops in Montreal. Canada would build 1400 of these vehicles, almost all of which found their way to the Soviet Union.)

The 7th Corps was dissolved and the newly christened “Canadian Corps”, comprising the 1st and 2nd Canadian Infantry Divisions along with supporting elements, came into existence with General McNaughton in command. It fell heir to the 7th’s role of ‘GHQ Reserve.’ The 2nd Division took up residence in the Aldershot barracks that had previously been occupied by the First. German bombing attacks on London continued through that winter, but a great national effort had restored the equipment and organization of the army rescued from Dunkirk and the Canadians were no longer under the same pressure as before. As spring approached, the menace of invasion returned, and the Canadian Corps actively trained for the defence of Britain; the prospects of repelling a potential German assault were much better than they had been before.

1941 saw the Canadian Corps trained and drilled for an invasion that would never come, with a combination of coastal defence duty, unit training, and formation-level training occurring regularly as the months went by. Exercise Waterloo, which took place between the 14th and 16th of June 1941, was the largest exercise held in Britain up to that point, with Canadian Corps practising for a mock German combined air and sea landing alongside British units. Exercise Bumper was larger still, comprising nearly 250,000 men. These exercises focused mostly on traffic control, logistics, and communications. Vital, but not particularly useful for the individual soldiers. At home in Canada, there was much discussion that year in Ottawa about the future strength and organization of the Canadian Army Overseas. The government was committed against conscription for overseas service, and apprehension of difficulty in replacing future casualties was influential. 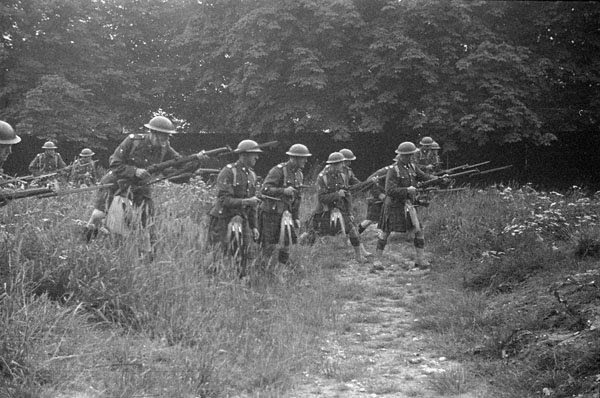 On the 22nd of June, the Germans launched Operation Barbarossa and invaded the Soviet Union. Contrary to the expectations of the British War Office and many other Western observers, the Russians did not collapse in three weeks; on the contrary, Germany soon found itself committed to an eastern campaign of colossal scale to which no end could be seen, and gradually it became clear that a German invasion of Britain was no longer possible. Many Canadian soldiers felt that the job to which they had seemed dedicated was fading away. Nevertheless, ceaseless vigilance was still the order of things. For a time in the summer of 1941 the 2nd Canadian Division exchanged positions with a British division that had been defending part of the Sussex Coast; then in the autumn the Canadian Corps as a whole relinquished the job of GHQ Reserve and moved into Sussex. Here it came under the operational command of the general officer commanding-in-chief the British South Eastern Command. Shortly thereafter the corps was taken over by General Crerar, and the command by Lieutenant-General B.L. Montgomery. The Canadians, and Crerar, now had their first experience of this dynamic and difficult little Anglo-Irishman, of whom they were to see a good deal more. 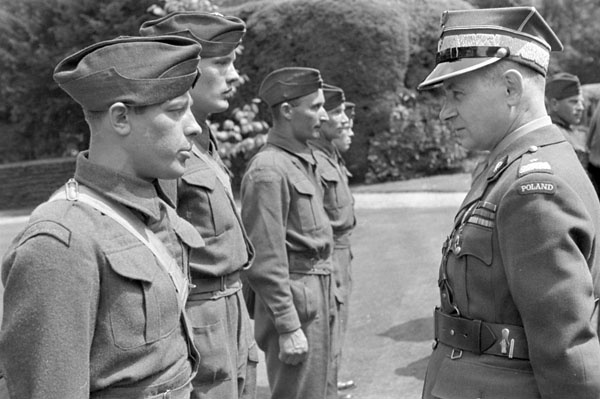 Whatever else Montgomery was, he was a great trainer of troops; and he worked his command (he preferred to call it the “South-Eastern Army”), and the Canadians within it, hard. He had given a taste of his quality as chief umpire in the great manoeuvres during the Bumper Exercise in which twelve divisions had ‘fought’ across southern England. His own Exercise ‘Tiger; (May 1942) was remembered as a classic example of tough training; McNaughton reported, ‘some units marched on foot as much as 250 miles which is about the life of army boots on English roads.’ Montgomery also, with Crear’s concurrence, made a survey of what the called the " Command Element in Canadian Corps’; he made adverse comments on a number of Canadian commanders, including two divisional commanders. The great majority of these men, among them the divisional commanders, Major-General G.R. Pearkes, VC, who had succeeded McNaughton as the commander of the 1st Canadian Infantry Division, and Major-General C.B. Price of the 3rd Division, were subsequently removed. The 3rd Division had begun to arrive in July 1941, and was fully in Britain by the end of August.

Back in Ottawa, a finalised plan (which was supposed to be fully implemented by late 1942) was set in place. The overseas army would total five divisions, three infantry and two armoured, as well as two independent tank brigades. The final infantry division (the 3rd) was in place by the end of the Summer 1941, the 1st Army Tank Brigade had preceded them in June, and the 5th Canadian Armoured Division followed that autumn. The last Canadian division to reach England, the 4th Armoured, crossed the ocean in the summer and autumn of 1942. The final independent tank brigade did not reach England until 1943. 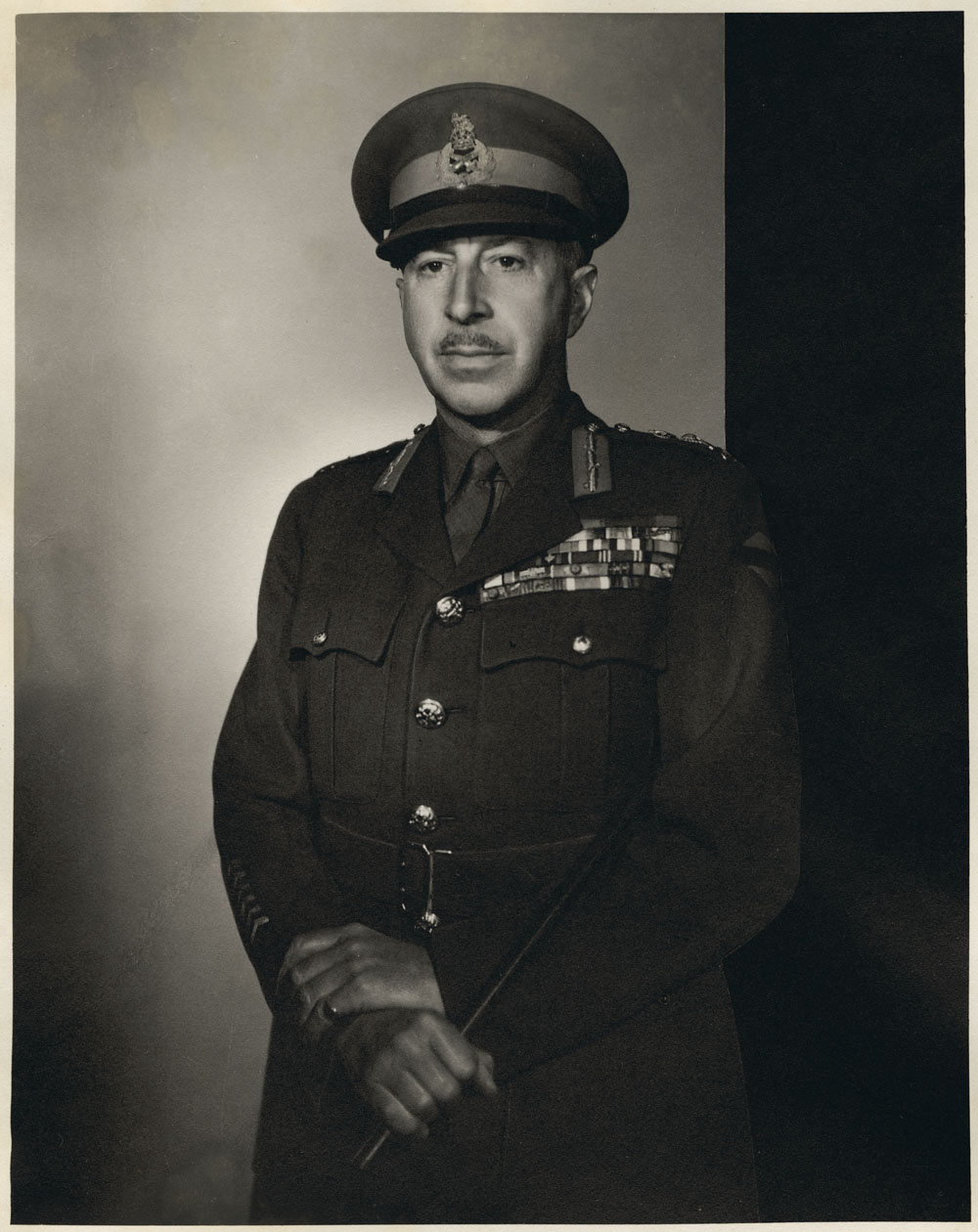 Backtracking to 1942, it had been well over two years since the 1st Canadian Division had arrived in England, and Canadians had yet to see action. In August-September 1941 a detachment of some 500 men of the 1st Division had been employed in an expedition to the distant Arctic archipelago of Spitsbergen to disable coal-mines there, remove the Norwegian population and deprive the Germans of meteorological information sent out by radio; but again this brought no contact with the enemy. It was common knowledge that the Canadian troops were becoming ‘browned off’ and that morale was suffering. McNaughton refused to worry; his men, he was sure, knew that their time would come and were intelligent enough to wait for their moment. General Crerar was not so certain; and when he found himself the senior Canadian officer in England during a visit by McNaughton to Canada and the US in early 1942 he used the opportunity to impress on General Montgomery, General Brooke, and Lord Louis Mountbatten (then adviser on, later chief of, Combined Operations) the desirability of giving Canadians a share in the program of raiding operations being carried on against the German-held shores of the Continent. This probably had some influence when later that spring the 2nd Canadian Division was selected for the raid on Dieppe on the 19th of August 1942.