While the massive invasion of the Benelux countries and France was going down last week, things were also developing on the fronts in Norway and China. But this week, the German beast is let loose. After breaking through its cage at Sedan last week, nothing seems strong enough to block its way to the English… 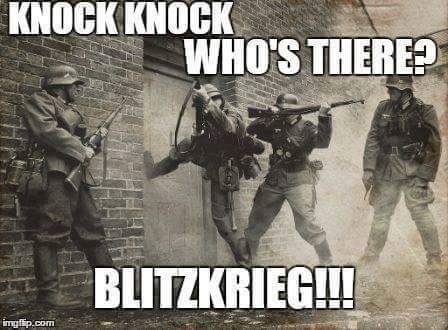 What source claimed Weygand stopped for an omelette? He probably should have packed his lunch for the cluster**** trip.

Insurgencies in the Italian Empire’

‘SPOILER WARNING: The Insurgencies in the Italian Empire & the 2nd Sino-Japanese War remain unconnected to World War II until June 1940(When Italy declares war on the Allies) & September 1940 (When Japan invades French Indochina & joins the Tripartite Pact). After these points, I’ll roll them into World War II.

MY POLICY ON COUNTRY PLACEMENT: If a country declares war on or attacks another country & at least one of them is already involved in World War II, I’ll list the other as a part of the opposing faction. That is why the events of the Winter War are included in the main World War II list & the events of the War of ‘41(Ecuador vs. Peru) will not be. The countries listed in the factions above are comprised of both official members & co-belligerents. The terms “Allies” & “Axis” are used for both kinds of belligerents as a convenient way to distill the world war & it’s adjoining conflicts, with disclaimers used to elaborate on some of the more complicated situations. If a country or resistance movement is at war with at least one country form both factions, I’ll add them to the 3rd parties list with a disclaimer. I have to consolidate factions along co-belligerency or else the number of factions will balloon out of control. Finally, each post only represents the factions as they were 79 years ago to the day. Many countries will join, leave, or switch sides before the war ends for various reasons & I strongly encourage you to look into the situation of each country for yourself.

I love the title but you might wish to reconsider it. It will hurt your SEO and therefore visibility on YouTube because it knows there’s really a swear word there. Would be a shame for that to happen.

Why not something like ‘The Allies Make a Mess of France’? Just an alternate title I came up with in a couple of seconds. Unfortunately these are things you must consider in the SEO business and I can tell you it matters, having done web design work in a semi-pro capacity. Hope this helps.

“Frick” sounds kinda stupid, even for a censored alternative.

In the video the name of the author was probably a editing error: Hans Van de Ven --> Hans van de Ven. Yes, I know it’s nitpicking, but after making the same mistake in my high school days I’m trained to see this detail. Hopefully this will prevent another mistake when you are quoting him.