March Ratchawalop or Known as Royal Guard March Is a royal music written by king Bhumibol Adulyadej (Rama IX) written in the year 1951, named "Ratchawalop " and bestowed as the song of the 1st Infantry Regiment, Royal Guard. For use in the parade. After that, the commander of the 1st Infantry Regiment, the Royal Guard, assigned Major Sri Pho Thotanasut to write a Thai request. With a longer music room than before Therefore requested additional royal permission to match the petition In correcting the melody to match this petition Graciously pleased Have the Phra Jen Duriyathorn (Piti Wittayakorn) help review and give the name of this royal song that “The Royal Guards March” in 1955 or knows as March Ratchawalop 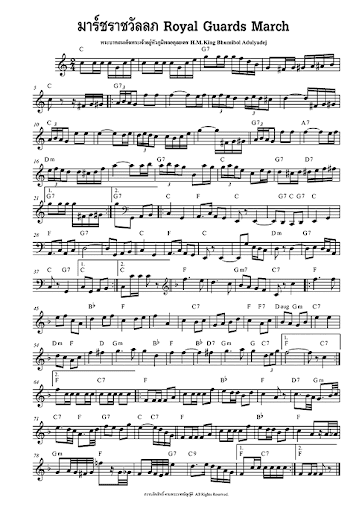