When it comes to the SS it is usually mentioned in terms of attrocities and other crimes in the occupied areas. But have there been any SS Members that showed some kind of humanity throughout the war?

Any? I’m sure there was someone who was nice. Never heard of a general accounting. The SS was not known for winning hearts and minds.

There are many stories of regular German soldiers and officers showing compassion and humanity but I have yet to hear about the SS showing compassion. I do not doubt that there are stories of SS doing so but as they were notorious in their brutality and were viewed by many as deplorable and monsters if any good news stories exist they are likely brushed off as rumour or unthinkable due to their reputation.

I think you’re approaching this from the wrong angle.

People who are likely to show compassion were, likely, deemed unworthy / not-good-enough for the ‘elite’ SS.

True… Big spoilers… one of the worst brigades ever would come out of the SS… the dirlewanger brigade.

I’d agree but a lot of Waffen SS people were conscripted more or less, mostly officers from the Wehrmacht but also a lot of foreign SS were signed up under less than ideal circumstances and many were about fighting Communists not brutalizing the people, although there’s ALWAYS overlap.

If you’re talking general SS, the answer is no. EXCEPT, there were a number of doctors and nurses under the SS umbrella who did what they could when they found out how depraved the SS were in “racial hygiene” SS Dr. Hans Munch, called the "Good Man Of Auschwitz", How is That Possible?

During World War II, a large number of prisoners underwent medical experiments in German concentration camps. In Auschwitz and other camps, prisoners were

He wasn’t the only one, but he was the most notable within the SS medical core.

foreign SS were signed up under less than ideal circumstances and many were about fighting Communists not brutalizing the people, although there’s ALWAYS overlap.

The French SS comes to mind, for me at least. Meeting a few in Paris back in 1993 did give me a new perspective on why they joined up (the one thing common among most of those I met were that they despised the Soviets more).

Well my Flemish family was quite clear that they were pro-Flemish and anti-German. Obviously everyone has different palette of reasons to join. A lot however wanted to get higher on the “food-chain” as they could terrorize and boss fellow country people around while licking German (National Socialist) boots all the way.

I think a lot of it was ambition as well, resistance work didn’t get medals and was a lot more dangerous.

For the average decent person it was obvious that the Zweites Reich had terrorized the Belgian population in World War 1 and that the Drittes Reich was getting worse.

In all there were about 18000 Waffen SS volunteers in Belgium and very willingly joined divisions with names like “Langemark” the Belgian village that was completely Annihilated in the Battles of World War 1.

Also Communists/Bolsjevists were actually portrayed as Jew controlled by the National Socialist because there was much more antisemitism than anti-communism in with the common people.

After the war the survivors presented themselves mostly as boy scouts who were really only interested in fighting Stalin and Communism. There might be a few but I would take this with a few bags of salt!

The other reason that the Communist myth is doubtful: The National Socialist started recruiting in the Netherlands and I think Belgium too in May 1940 when Stalin and Hitler were “friends”. They were joining up to fight the Capitalist British? Or the tiny number of Belgian Communists who were protesting the horrible crisis conditions? or maybe just the Jews who looked different in their black outfits and always were hated as they (actually a few of them) made money in the diamond trade as they were barred from most jobs!

Feel free to prove me wrong here. And NOTE I am talking about the willing Joiners in the war. I am aware that end of 1944/1945 a lot of people were dragged into the SS by coercion of other stuff (but still a lot of willing ones as well). I will give an example.

Regarding the French SS, the unit was formed in September 1944. Before that, there was the Légion des volontaires français contre le bolchévisme in the Wehrmacht, formed in 1941, and the Französische SS Freiwilligen Sturmbrigade, formed in 1943 (all formed well after Operation Barbarossa).

The National Socialist started recruiting in the Netherlands and I think Belgium too in May 1940 when Stalin and Hitler were “friends”.

Pretty sure those units were formed after Barbarossa, political tensions in 1940 aside.

Here is the complex 1944 case which was huge news at the time and also a case that Dutch history likes to hide:

There is the story of Aantjes in the Netherlands who had an issue with a local Nazi. (not 100% sure if this was true), joined the Arbeits einsatz as a mailman.

In 1944 he wanted to join the Germanic SS for a posting in the Netherlands were (he said) to offer him a chance to escape.

However when it turned out that he would have to put on a Waffen SS Uniform he refused and was put in a labour camp in the Netherlands.

He became very influential politician of the Christian Democrats and confided his war past with a Jewish Social-Democrat leader Ed van Thijn. However he told a lot except for the “SS” part.

In the 70s there Lou De Jong the leading holocaust researcher digged up a lot and when the newspaper of the North got wind of it they asked him as they wanted to here his side before publishing this damning info. Have you been in the Waffen SS, he said no I was in the Germanic SS!

OK the next day his career was destroyed. In the end he was hammered really, really hard but then again he was a moralized who had kept his history secret to protect his career.

The only thing I could find in English was on Wiki sadly (and a lot of Dutch articles are behind paywalls). Some say his character assassination is just political but I think a lot of people where really grieved that he lied himself while moralizing everyone else. The distrust of him was also personal.
Willem Aantjes - Wikipedia

Pretty sure those units were formed after Barbarossa, political tensions in 1940 aside.

Hi,
Good point, after Barbarossa there were more recruitment drives for sure (more vacancies over time I guess

Also, there were some name changes which make tracking a bit more complex. However my sources say the recruitment into the SS started in 1940 and they were forming the divisions early. Way before Stalin was an issue. At that point Felix Steiner was also still a favorite of Hitler (not sure if he will his favorite throughout the war

The Waffen SS had 600,000 members in June 1944. I don’t think that such a large number of people can be labeled as evil across the board. Especially since not every soldier in the Waffen SS was actually a volunteer. In every country and on every side there are good and bad people. As a positive example of the Waffen SS, I would like to mention the treatment of the captured British paratroopers in Arnhem in 1944. The SS soldiers had great respect for the bravery shown by the British. British survivors later reported that their treatment was more than correct and sometimes even “friendly”.
Another example is the German writer Günter Grass. At the age of 17 he was a member of the Waffen SS and a loader in a tank of the 10th SS Panzer Division “Frundsberg”. Later he wrote the world success “Die Blechtrommel” and even received the Nobel Prize for Literature in 1999. 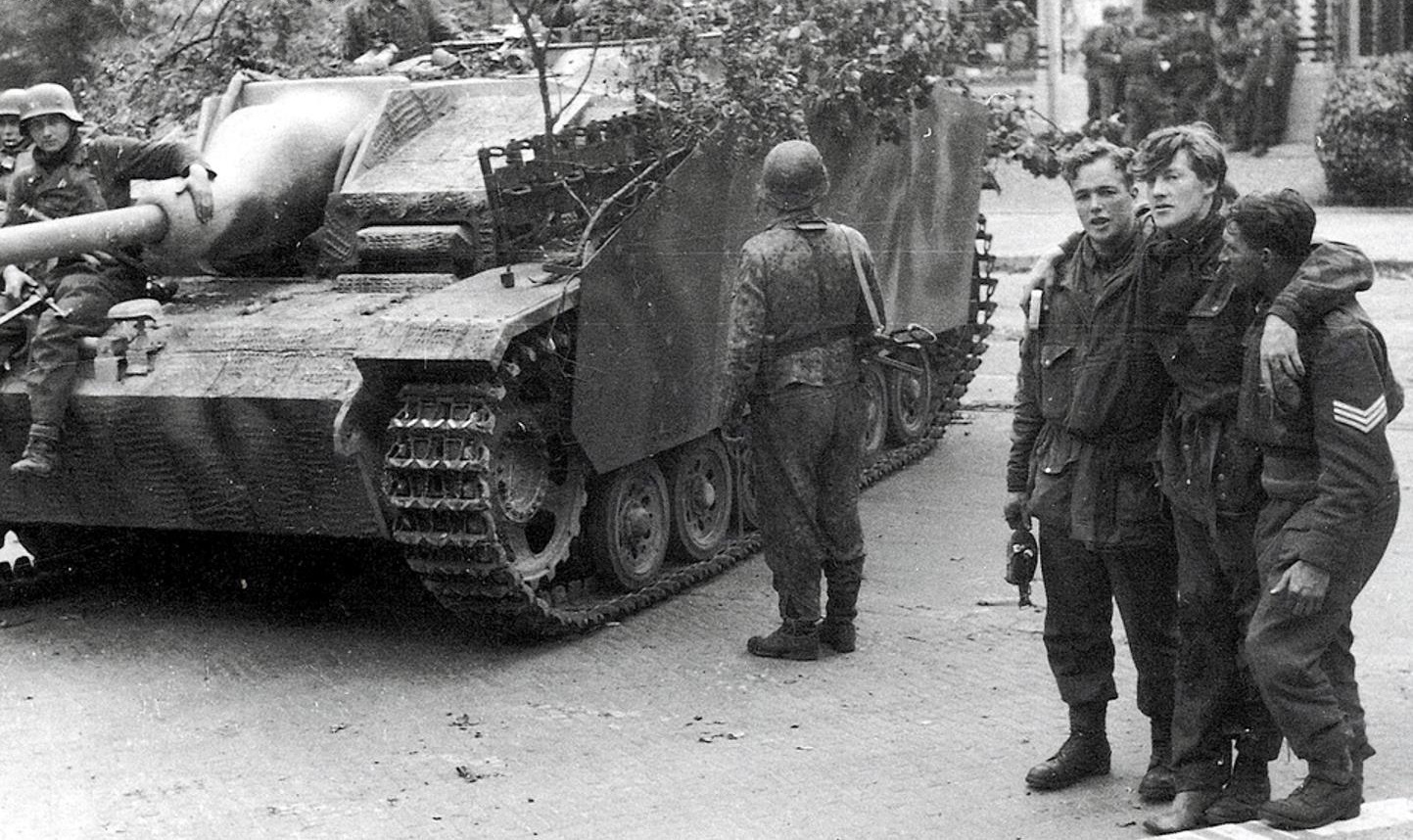 The problem with the Waffen SS is because it is known for the atrocities committed by this group which is well documented overshadows any good done by either individuals or small groups of SS and therefore are treated as evil beings that could do no good.

The same could be said for Hitler he brought about many positive changes for Germany and Germans before the war but few remember him for that he instead is remembered for the atrocities he allowed to happen and endorse.

As has been noted there were many distinct units that get grouped together under “SS”. There are even greater distinctions that just Allgemeine or Waffen.
I have meet individuals who were part of Leibstandarte SS, who had stories of kindness, but not what could be considered humanity. The overall dogma of National Socialism and the years and years of dehumanising groups means that in their minds, they could not show humanity to those groups as they were “not human”.