JAPAN, RUSSIA IN PACT; WORLD IS BEWILDERED
….
Neutrality treaty seen as harmful to U.S.; also as blow to Axis
….
By the United Press 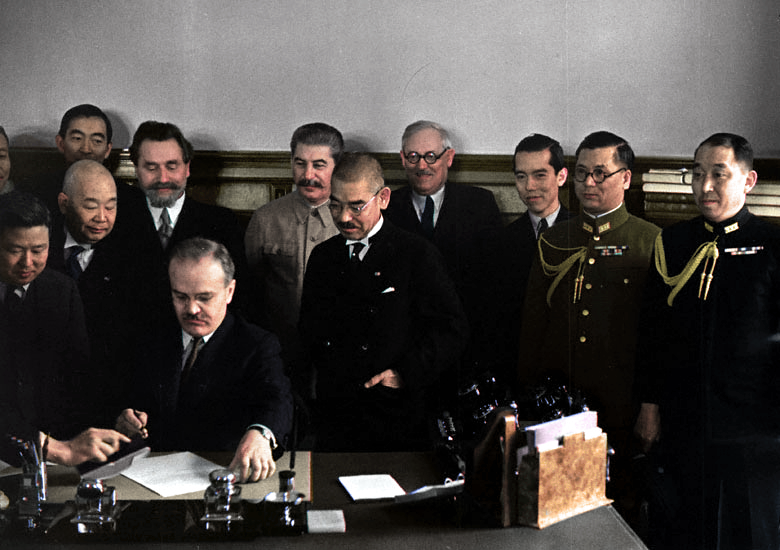 Statesmen in all parts of the world tried to evaluate the new “neutrality” treaty of Russia and Japan today, and seemed unable to form any definite conclusion.

Neutral statesmen pointed out that Japan had wanted a non-aggression treaty with Russia, like the one Russia gave Germany in August 1939, a month before the war started. Instead she got a “neutrality” treaty in which the nations promised to remain neutral if the other was the “object” of military attack. Neither nation was pledged in the event the other is an attacker rather than the attacked.

Semi-official reaction in Tokyo indicated that the Japanese expected great things from the treaty. They think it would aid them in bringing a quick end to their war with China, give pause to the United States in its efforts to aid Great Britain against Germany and Italy and to oppose Japanese ambitions on Oceania. Japan is now free to devote its attention “elsewhere,” was the general tenor of Japanese comment.

From Moscow came only the text of the treaty; there was not one word of comment or explanation. The reaction of various capitals follows:

The treaty is designed to harmonize Japanese-Soviet relations and interests, which follow the Axis policy. The treaty certainly is intended to preclude any United States-Russian rapprochement.

A victory for the Rome-Berlin-Tokyo alliance. It kills the hope of Americans and British that Russia will intervene against the Axis if the United States enters the war.

London
Official quarters saw the treaty as not necessarily unfavorable to Britain on the theory that it frees Russia to cope more actively against German aggression in Europe. But this is outweighed in many minds by the threat of greater Japanese aggressiveness in the South Pacific.

Washington
Officials anxiously studied the treaty to appraise its meaning to the United States, which opposes Japanese expansion in the South Pacific. Secretary of State Hull belittled the pact and said America’s policy in the Pacific remains unchanged.

Chungking
Informed Chinese sources said Moscow has assured China that the new pact does not affect the fundamental Soviet policy of aid to China. As a result, the pact was not regarded as substantially detrimental to China’s position.

PACT OF NEUTRALITY BETWEEN UNION OF SOVIET SOCIALIST REPUBLICS AND JAPAN

The Presidium of the Supreme Soviet of the Union of Soviet Socialist Republics and His Majesty the Emperor of Japan, guided by a desire to strengthen peaceful and friendly relations between the two countries, have decided to conclude a pact on neutrality, for which purpose they have appointed as their Representatives:

who, after an exchange of their credentials, which were found in due and proper form, have agreed on the following:

ARTICLE I
Both Contracting Parties undertake to maintain peaceful and friendly relations between them and mutually respect the territorial integrity and inviolability of the other Contracting Party.

ARTICLE II
Should one of the Contracting Parties become the object of hostilities on the part of one or several third powers, the other Contracting Party will observe neutrality throughout the duration of the conflict.

ARTICLE III
The present Pact comes into force from the day of its ratification by both Contracting Parties and remains valid for five years. In case neither of the Contracting Parties denounces the Pact one year before the expiration of the term, it will be considered automatically prolonged for the next five years.

In confirmation whereof the above-named Representatives have signed the present Pact in two copies, drawn up in the Russian and Japanese languages, and affixed thereto their seals.

A PAPER IS SIGNED IN MOSCOW

The Russian-Japanese “neutrality" pact would be of momentous significance if either contracting party could be sure that the other would adhere to the letter and spirit of the document for the full five-year period, come what may.

But the records of Moscow and Tokyo indicate that they will stand hitched just as long as it is in their mutual interest to do so – and no longer […].

Conditions on which, as of Easter Sunday 1941, that the two governments thought such a treaty would work to mutual advantage. Russia, fearing Germany might try to overrun the Ukraine, wanted assurance that if she went to war in this quarter, Japan would not knife her in the back. Japan, apprehensive of trouble with the United States, wanted similar assurance from Russia. So they signed a piece of paper.

But if the solemn pledge of an aggressor-minded nation means anything, why is Russia worried? Doesn’t she have another piece of paper, with Hitler’s signature promising that Germany will not aggress against Russia? If Stalin had faith in that promise, would he now have so many divisions toward Turkey and Yugoslavia? Or would he have rebuked Hungary for joining Germany in the invasion of Yugoslavia?

And Japan’s dilemma – her fear that the United States might block her intended further expansion in the Orient – arises largely from the fact that she herself not long since, when she thought she could get away with it, tore up another piece of paper – the Five-Power Pact guaranteeing the territorial integrity of China.

New dispatches from Berlin report Nazi officials jubilant over the Russo-Nipponese agreement – thinking it means that Japan will keep the United States so busy in the Pacific trial we will have to cut short our material aid to Britain, Greece and Yugoslavia. But if Hitler trusts such documents, why at a time when he is engaged in the terrific campaign of the Balkans, does he keep ao many able-bodied soldiers lined up along his eastern frontier making sure that Russia won’t forget her promises to him?

It would be a mistake, we think, for the United States to feel serene about that document signed yesterday in Moscow. After all, it may be aimed at us. Yet we can’t believe that the Japanese or the Russians are serene about it either. We think that the Russians know, for instance, that if their armies ever go into battle and are knocked out in Europe, Japan will not wait five years to move on Vladivostok. And that the Japanese know that if their troops are routed in China and their fleet sunk in the Pacific. Russia won’t wait five years to start throwing her weight around in Manchuria.

If it is cynical to say such things of Old World treaties, then Japan, Russia, Germany and Italy have given us cause to be cynical. Anyway we hope that for the time being our own government officials will use their fountain pens only for signing treaties with countries in the Western Hemisphere, where the name on the dotted line still is respected. Incidentally, this is Pan-American week – set aside for rejoicing that America’s mutual confidence still prevails.

In our dealings with the Old World, let’s guard our own national interests, trust only in our own military power – and keep our powder dry.

Tokyo, April 15 –
Japanese regarded their “neutrality” treaty with Russia today as a blow to the United States.

They believed it secured Japan’s northern defenses enabling the government to devote more attention elsewhere. A bolder attitude toward America was expected to result from the treaty signed in Moscow yesterday by Foreign Minister Yōsuke Matsuoka, and some observers said it might intensify Japan’s moves in the South Sea.

The newspaper Nichi Nichi said the treaty eliminated Japan’s deal strategy of having to guard against both the United States and Russia which had been her main drawback in the so-called Pacific crisis, and that Japan now could concentrate on her southward program.

Also, Nichi Nichi said, the treaty offered a chance to dispose of the China affair,

….because it is only proper that the neutrality provisions will be applied and will eliminate Soviet assistance to China.

The newspaper Yomuri said the treaty was:

….a great shock to the world when the United States entry into the European war is imminent.

….and that it was a “poignant blow” to Generalissimo Chiang Kai-shek’s Chinese government.

The general opinion was that what were regarded here as recent American attempts to woo Russian friendship had suffered a setback by the treaty.

…and means that Japan and Russia have revealed a policy devoted to the maintenance of peace in the Far East.

….will serve as the basis of a rapid solution, in a concrete manner, of various pending Soviet-Japanese questions, and will contribute greatly toward the promotion of world peace.

It was believed that Japan’s next step would be to attempt to settle the China affair by Soviet mediation. Russia could put pressure on Chiang Kai-shek to amalgamate with Wang Jingwei, head of the Japanese-supported Nanking regime, under liberal terms, and end the fighting which will enter its fifth year in July and which is tightening the Japanese people’s belts acutely.

Japan would be satisfied, it was said, if Chiang Kai-shek renounced his anti-Japanese policy and Comintern (Communist International) connections, and agreed to economic co-operation with Japan. Under such a plan, it was believed, Chiang Kai-shek might be permitted to retain jurisdiction over Central and South China, under Japanese supervision, while forsaking North China, and Japan might give the same promise it gave Wang Jingwei, to evacuate its troops within two years.

Wang Jingwei might be “induced” by Japan to yield the supreme administrative post in China to Chiang Kai-shek “for the sake of China’s peace,” it was said.

Regardless of other considerations, it was believed the treaty would hasten the settlement of pending Japanese-Russian problems and possibly lead to a commercial treaty including traffic arrangements, giving Japan cheaper rates on the Trans-Siberian railroad. The railway is increasingly important to Japan’s importation of machinery and other supplies from Europe, especially from Germany and Sweden, since blockades have cut off other means of transportation.

2 Likes
Why did the USSR feel their eastern border secure by the Non-Aggression pact with Japan?