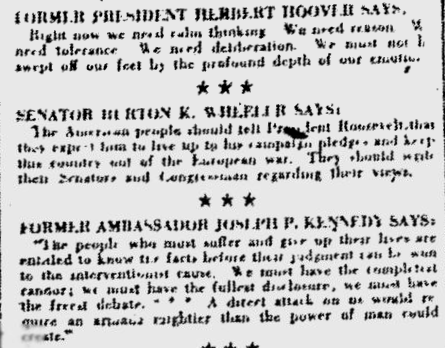 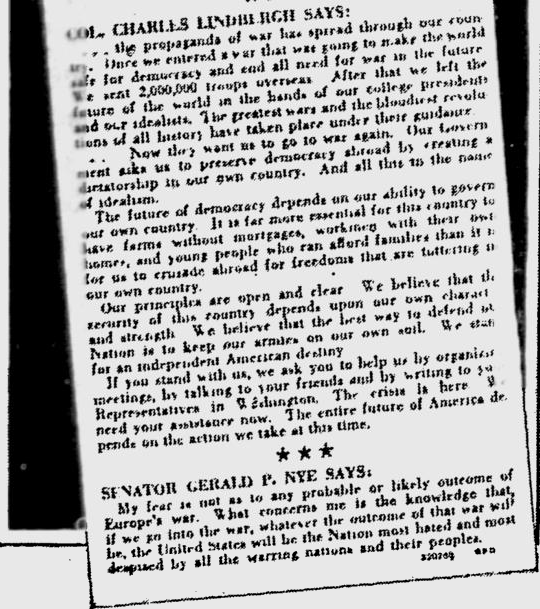 This is a facsimile of the card which Secretary of War Henry L. Stimson displayed yesterday when he charged Senator Burton K. Wheeler with conduct that “comes very near the line of subversive activity against the United States, if not treason.” Secretary Stimson said Senator Wheeler was sending the cards to American soldiers, urging them to protest against U.S. entry into the European war. The top of the card is shown above; back of the card, at right. Note addressee’s comment on card which he returned directly to Gen. George C. Marshall. Senator Wheeler said the cards, although billed to him, were paid for by the America First Committee.

Hyde Park, NY, July 25 (UP) –
President Roosevelt asserted at a press conference held in his country home today that Senator Burton K. Wheeler has gone “too far” in his fight against administration international policies and is “on dangerous ground.”

The President, on his own initiative and without prompting, followed up the charge of his Secretary of War Henry L. Stimson that the Montana isolationist is:

…very near the line of subversive activities against the United States, if not treason.

Before reporters could bring up the subject, Mr. Roosevelt said that someone had asked him whether he had anything to say on Mr. Stimson’s statement.

His response to the question which no reporter had placed before him, he said, is that he agrees with the headings above editorials on Senator Wheeler which appeared this morning in the New York Times and the New York Herald Tribune. They were entitled, he said, “On Dangerous Ground” and “Mr. Wheeler Has Gone Too Far.”

That endorsement of the titles, Mr. Roosevelt said, covers the situation, implying that in the endorsement, he had stated his case. He made no move to modify or temper Secretary Stimson’s charges.

Mr. Roosevelt re-entered the administration battle with Senator Wheeler on his own initiative. He brought up the question and had noted on a sheet of paper the titles of the two editorials which condemned the activities of the Senator.

The President’s comment was another of his frontal attacks on the major Senate opponents of his foreign and defense policies. Previous exchanges between the President and Senator Wheeler had been the bitterest in recent history of White House-Congressional relations.

Mr. Stimson’s use of the terms “subversive activities” and “treason” were based on evidence that cards originating with Senator Wheeler had been sent to soldiers, inviting them to write to the President and Congressmen urging them to “keep the country out of the European War.”

Mr. Stimson charged that such activities struck at the nation’s defenses by injuring Army discipline and training in a time of great national peril. On those grounds, he said he felt that Senator Wheeler’s activities bordered on treason.

The President said he had not read the Stimson statements before it was read to the press yesterday by the Secretary of War.

The Herald Tribune’s editorial, “On Dangerous Ground,” said in part:

This newspaper does not believe that Senator Wheeler is a traitor; it has, in fact, consistently supported his right to speak freely on the issues of the day. Nevertheless, anyone who carries a discussion of national policy directly to the members of the armed forces, as Senator Wheeler has done, is assuredly treading on most dangerous ground.

Mr. Wheeler’s right to campaign for the cause he has made his own is unimpeachable; his methods in the present instance are worse than dubious – they are dangerous.

The Times editorial, “Mr. Wheeler Goes Too Far,” objected to “the carelessness or worse” which permitted the cards sent out by Senator Wheeler to fall into the hands of soldiers.

The soldier as a citizen has a right to vote. He has no right, if the Army is to be an Army and not a mob, to attempt, in his capacity as a soldier, to influence or intimidate the President on Congress.

Along that road lies the militarism against which Senator Wheeler has often fulminated. We cannot believe it is a road that more than a corporal’s guard of American soldiers would wish to travel.

We do not believe that the net effect of Senator Wheeler’s indiscretion, if it is not immediately checked, will be to lend aid and comfort to the enemies of the United States.

Of course, the President feels that anybody who opposes our involvement in war goes too far. Some time ago, I challenged him to come to Congress and ask for a declaration of war, I said that if Congress granted his request, I would go along with the war effort but that otherwise I expected national unity for peace.

They know that the people are not with them and the President ought to know that those postal cards had nothing to do with pending legislation concerning extension of the draft but were only sent out to ask people to request him to keep the promise he made that he would take this nation into the war.