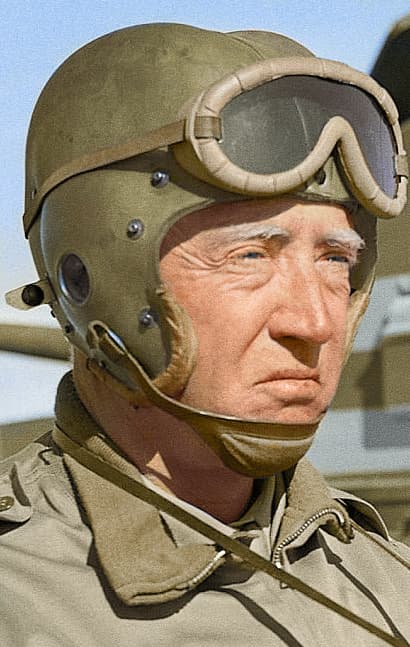 Allied HQ, Algiers, Algeria (UP) –
Lt. Gen. George S. Patton Jr. is commanding the U.S. 7th Army and has command it since it was activated, an official announcement said today.

Gen. Patton is commanding the 7th Army, has commanded it since it was activated, and is continuing to command it.

No report has ever reached this headquarters of any soldier refusing to obey an order by Gen. Patton. Gen. Patton has never been reprimanded at any time by Gen. Eisenhower or by anybody else in this theater.

Washington (UP) –
Radio commentator Drew Pearson said last night in his broadcast that Lt. Gen. George S. Patton, commander of the U.S. 7th Army in the Sicilian campaign, had been “severely reprimanded” by Gen. Dwight D. Eisenhower for mistreating an American soldier suffering from shock, or a nervous ailment, in a hospital in Sicily.

The War Department said it had “no information and no comment.” Mr. Pearson said, “I don’t think he [Gen. Patton] will be used in combat anymore.”

Here is a story which I don’t like to tell, but in wartime we have to let the chips fall where they may. The lowly private who gets punishment for a mistake is not spared by his superior officers and so the general who makes a mistake should not be spared either.

A great mystery has surrounded the whereabouts of Gen. “Blood and Guts” Patton. His pearl-handled revolver, his picturesque language, made headlines in the Tunisian campaign but he has not been heard of since. Here is the reason.

Gen. Patton was going through a hospital in Sicily and inquired what was the matter with a fatigue patient. A fatigue patient is one suffering from shell shock or nerves. Gen. Patton apparently used his own judgment as to the soldier’s illness, ordered him up out of bed, and when he didn’t get up right away, pulled him up and struck him, knocking him down.

Patton started to draw his pearl-handled revolver but was disarmed. Gen. Eisenhower severely reprimanded Gen. Patton, I don’t think he will be used in combat anymore.

Gen. Patton has long been known as one of the most colorful and aggressive generals in the Army. His name has not figured in dispatches since the conclusion of the Sicilian campaign.

As a major general, he commanded the Western Task Force which was assigned to take Casablanca, Morocco, during the U.S. landings in Africa last year. He was promoted to lieutenant general for his success in that operation.