Facebook Twitter Google+ EmailLink Facing two enemies at once, Poland finds itself in a crushing vice after less than a month of war and the Polish forces must flee their own country to live to fight another day. Written and Hosted by: Indy Neidell Produced and Directed by: Spartacus Olsson and Astrid Deinhard Executive Producers:…

The video is looking good, maps are better, I thought WW1 was brutal this time around the war is brought to the civilians who are now targets. Will you get back to the Sino-Japanese war? At this time it does look like a WW1 stalemate in China and the casualty counts are getting pretty high with approximately 80000 total

from https://ww2db.com/battle_spec.php?battle_id=179
The Chinese defenses were led by Nationalist Generals Chen Cheng and Xue Yue. Outnumbering the Japanese nearly two-to-one, they were able to entertain the plans for a counteroffensive as soon the Japanese attack launched on 17 Sep 1939. The two forces met in Jiangxi Province to the east of Hunan, resulting in a quick Chinese victory that pushed the westward marching Japanese invasion force back.

ww2dbaseAfter nearly a week of fierce fighting, the Japanese reached the outskirts of Changsha on 29 Sep, but by this time the Japanese forces were already weakened by heavy casualties estimated at over 40,000, with a bulk being fatalities. After constant harassment, the over-stretched supply lines were also in danger of being completely severed. The remnants of the Japanese forces fled north by 6 Oct. The 16 Oct 1939 issue of Time Magazine reported that

“the Chinese turned around and, with a fury they have never shown before, lashed the Japanese back and back… the Chinese destroyed every rail line, every road. The Japanese blithely advanced over this torn-up area until they were in the worst military position known to man: on a thin front without communications behind. That was when the Chinese struck. The Japanese had nothing to do but run.”
ww2dbaseThis battle represented the first major defeat of the Japanese Army at a major Chinese city since the start of the Second Sino-Japanese War in Jul 1937.

Thanks, for the feedback! We’re getting to the Sino Japanese War in a pretty big way next week in episode 006 (October 6).

September 28, 1939. [image] On September 27, 1939, Warsaw, Poland, surrendered after weeks of resistance to invading forces from Nazi Germany and the Soviet Union during World War II. In this photograph, we see a German victory parade in Warsaw. (open in new tab for full picture) Link: http://oldtimesincolor.blogspot.com/2018/09/september-28-1939.html 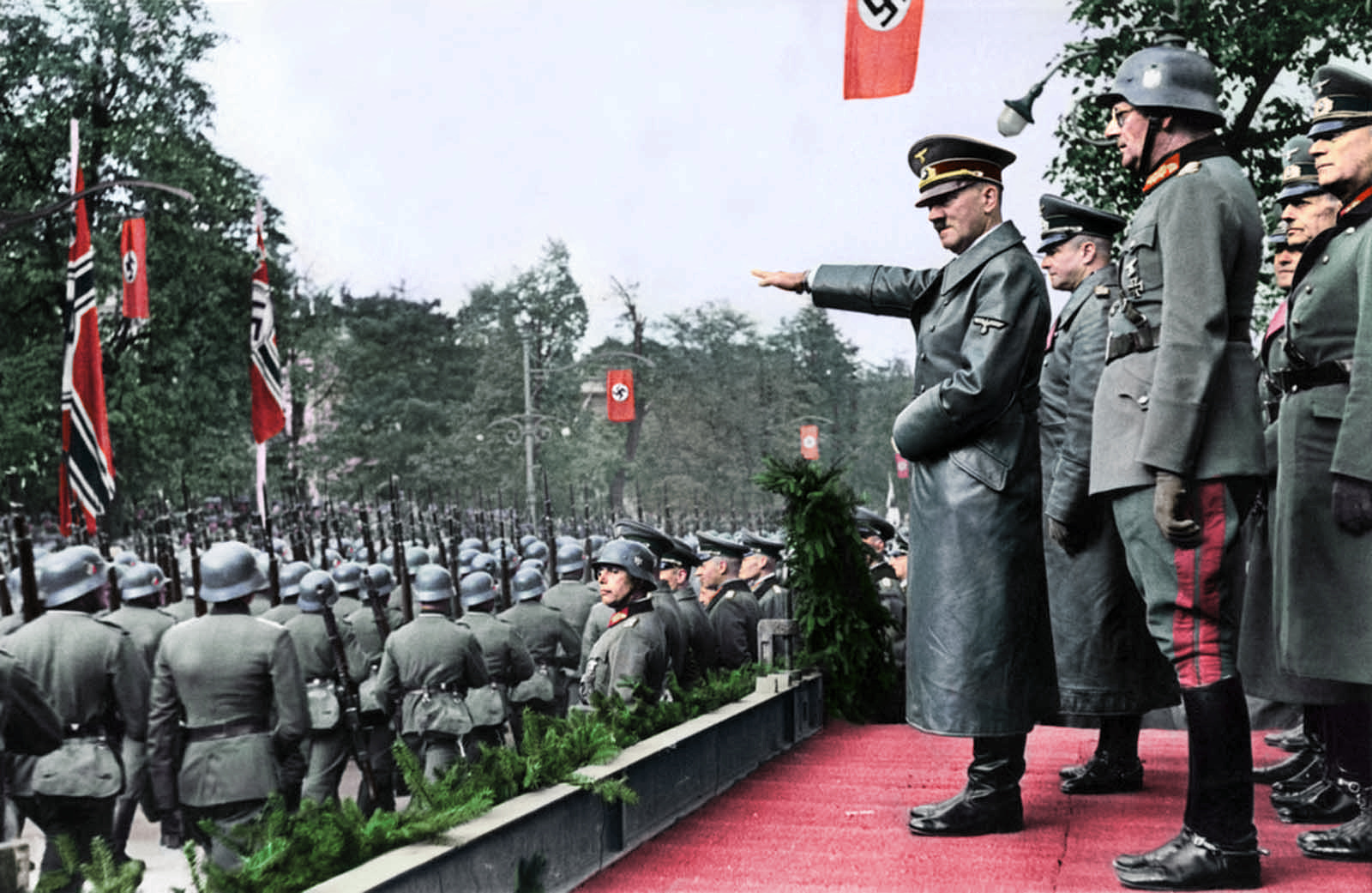 The Witold Pilecki Center for Totalitarian Studies writes in their book “Chronicles of Terror Warsaw”:

As early as the spring of 1939, proscription lists of Poles to be eliminated first - the elite of Polish society - began to be made. These meticulously detailed lists contained around 61,000 names of people to be liquidated immediately or sent to concentration camps. The name of the plan - Intelligenzaktion - immediately heralded its goal. In this way the Germans wanted to get rid of the Polish leadership, individuals capable of organizing military, economic, and cultural resistance, culture being a sphere that the Germans were particularly set on destroying. Poles who had taken part in the Wielkopolskie and Silesian uprisings against Germany were pursued with alacity.

The plan was to be carried out by special police and SS units known as Einsatzgruppen, operating at the rear of the front. It was Einsatzgruppe IV that entered Warsaw.

I haven’t seen the episode yet, but if you haven’t mentioned it in this episode, maybe you could mention the fact that the Germans already planned who they were going to liquidate months in advance of the Polish campaign.

That sounds a lot like the Nazis’ little black book that was put together for if they’d managed to invade Great Britain.

I haven’t seen the episode yet, but if you haven’t mentioned it in this episode, maybe you could mention the fact that the Germans already planned who they were going to liquidate months in advance of the Polish campaign.

I think we have made that pretty clear in several episodes already… we will get back to this in a big way in The War Against Humanity series.

…I thought WW1 was brutal this time around the war is brought to the civilians who are now targets.

I think the tag line for WWII should be “If you liked the rape of Belgium, then boy do we have the war for you!”

“If you liked the rape of Belgium, then boy do we have the war for you!”

So dark, so very dark these humans and their humour…