London, England –
A large force of four-engined bombers passed over the east coast today, headed toward Europe. The roar of their motors continued 15 minutes over one town. 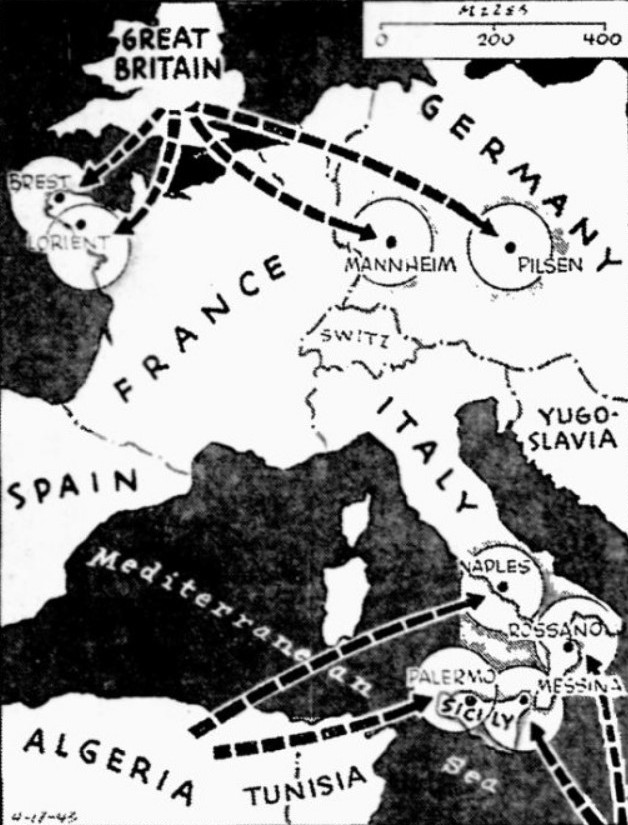 Striking from many sides, Allied bombers are continuing their pounding of the Axis. In raids announced today, the RAF struck twin night blows at Pilsen, home of the giant Škoda Works, and Mannheim, after daylight U.S. Air Force bombings of U-boat bases at Brest and Lorient, in France. The southern Axis partner, Italy, felt the aerial warfare in attacks on Naples and Rossano, in Italy, and Palermo and Messina, Sicily.

London, England –
More than 600 British bombers rocked Mannheim and Pilsen, two of Germany’s most important armament centers, last night with probably the greatest tonnage of bombs ever dropped in a single night.

First reports indicated that the weight of bombs – ranging from 8,000-pound super blockbusters to two-pound incendiaries – exceeded even the 1,500 tons dumped on Germany during each of last year’s paralyzing 1,000-plane raids.

While the Royal Air Force pounded Germany from the West, the Russian Air Force may have been bombarding the country from the East. A German broadcast reported that northeastern Germany was raided for the fifth time in a week.

The Air Ministry said the British raids on Mannheim and Pilsen constituted the biggest night operation of the year.

Fifty-five bombers were lost in the twin raids, the largest British loss in a single night of the whole war.

Preliminary reports indicate that both attacks were concentrated and successful.

Striking into the heart of Germany, the main force, composed entirely of four-engined Halifax and Lancaster bombers, unloaded hundreds of tons of bombs on the sprawling Škoda Works at Pilsen, one of the world’s largest arms producers.

A smaller force of four-engined Stirlings and Halifaxes, with a number of twin-engined Wellingtons, simultaneously blasted Mannheim-Ludwigshafen.

Hundreds of four- and two-ton blockbuster demolition bombs were among the cargoes of destruction unload on factories turning out munitions and guns for the Axis.

It was the first time that the RAF has struck in such force at two widely-separated cities on a single night and seemed to emphasize Prime Minister Churchill’s repeated warnings that British planes will fly over Europe in increasing numbers to pulverize and paralyze Adolf Hitler’s European fortress as a prelude to an Allied invasion.

The Škoda factories cover 400 acres in Pilsen and rank with Krupp as one of the world’s largest arms producers. The British bombers made a roundtrip of more than 1,200 miles – one of the longest of the war – to bomb Pilsen, which is situated in what was formerly Czechoslovakia.

Pilsen has been raided four times previously, the last on May 4, 1942.

Few towns are more important to the enemy’s armed forces. Mannheim’s concentration of industrial plants is as close as anywhere in Germany.

Last night’s raid was the 56th attack of the war on Mannheim.

A German broadcast reporting that northeastern Germany was also raided last night indicated that the Russian Air Force made its fifth raid in a week on the Reich.

The procession of bombers took more than an hour to pass over the southeast coast last night.

Less than 12 hours before the RAF’s big force of night raiders took off, two flights of U.S. four-engined bombers struck a double blow at Germany’s submarine campaign by raiding Lorient and Brest, two of the principal U-boat bases on the French Atlantic coast, in daylight.

Returning American pilots reported bomb hits on the railroad yards and near the power station at Lorient. Staff Sgt. Fred Newcome, of Portland, Maine, said the raiders did “a damned good job” in the target area.

Four bombers and two of the escorting Allied fighters were lost in the two raids, but a number of intercepting Focke-Wulf fighters were shot down.

German bombers struck back last night with another feeble raid on the Thames Estuary. One plane skirted the London area, causing an air-raid alarm in the capital, and dropped bombs in a suburb. A number of houses were demolished. At least four German bombers were shot down.

A Nazi broadcast, obviously designed to placate the home front in the midst of heavy British raids, said the German planes bombed “war-important” installations in London during the night.

Heavy losses. 1943 was a very tough year for bombers.

Interesting that Britain continues to be bombed. Histories make it sound so one sided. Just because the Germans were bad at it doesn’t make it less of a one sided affair.

Also love how biased the coverage is. Allied bombers hammer war production facilities while Nazi’s blew up some houses. Where in both cases a bunch of scared bomber crews dropped bombs and ran for their lives. In a recent video on Dresden, Tik mentions that Americans estimated that more than 40% of their bombs were more than 5 miles off target and that was daylight bombing.

I do recommend this video. 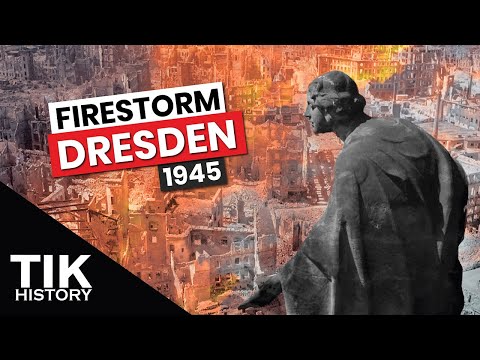