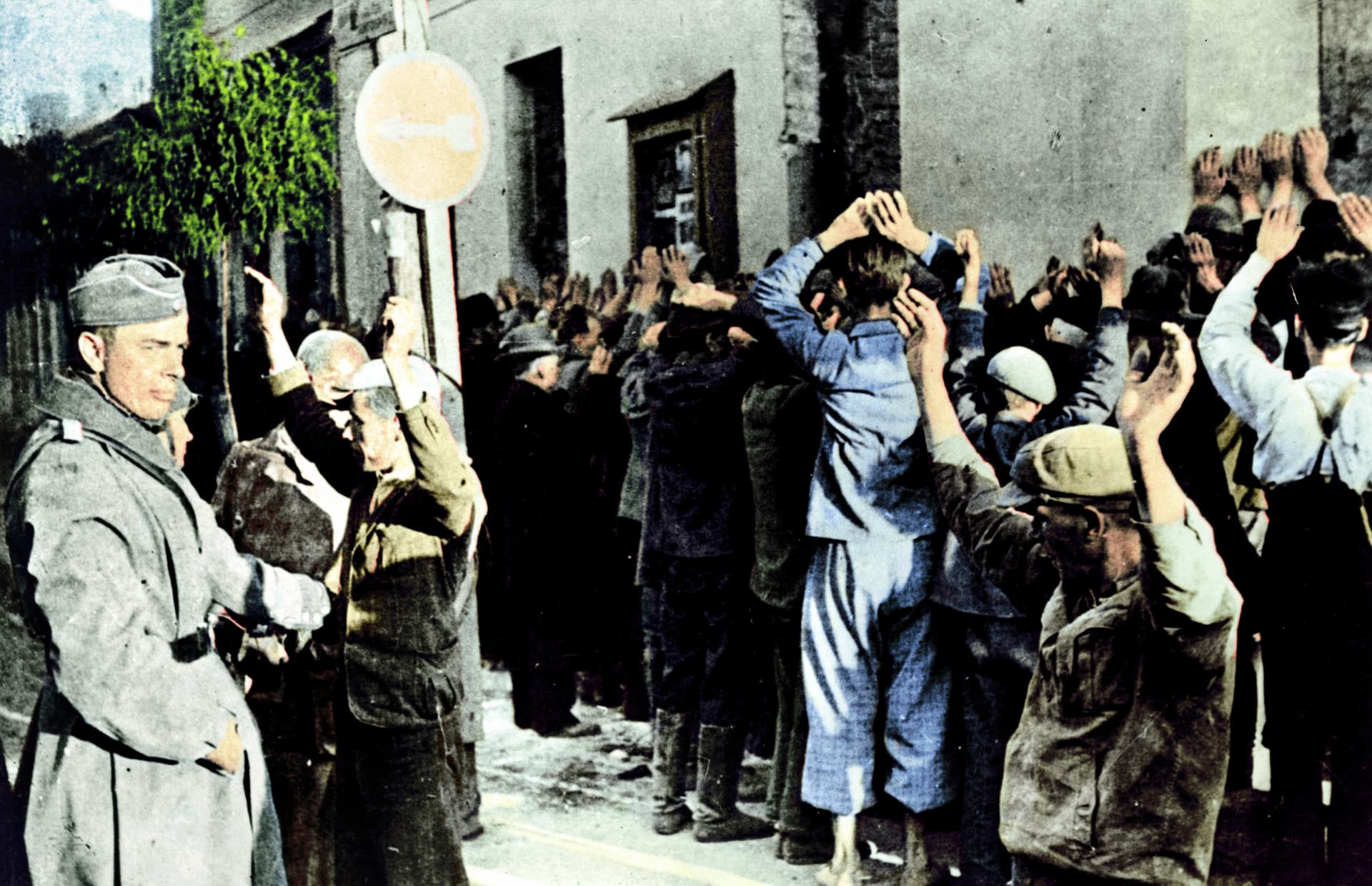 Jews rounded up in Warsaw are shown being searched by Nazis who lined them up against a wall in the ghetto. Countless tales of atrocities committed against Jews have come out of Nazi-occupied Poland. This photo was found on the body of a German officer, evidently a participant in this roundup, who was killed on the Moscow Front.

Totally agree. Americans would steal all sorts of war booty but keeping pictures of atrocities just seems weird and evil to me

Then again in a Country were schoolchildren were made to throw empty cans at starving Russians nothing surprises me. At least he died for his fuhrer!

During German occupation of Poland. The photo was taken in the Warsaw Ghetto.

no I meant the Can throwing part. What’s the story behind that.

@1nt17cs152.ritvik Honestly, not sure. @Chewbacca Mind if you elaborate and show documented evidence of that?

I don’t have pictures of that. But my grandparents were both in the Arbeitseinsatz (put to work in Erfurt, Germany). For example my grandmother ( b1924) among other things washed uniforms for “recycling”. many were still stiff with blood but were washed repaired.

Also there were a lot of Russian in the other side of the camp but people worked and mingled. My grandmother had a private school education and was very learned from the time and she learned the old Greek stuff as well. She also learned quite a bit of Russian in the came and hid a Russian doctor “Vera” in the camp and sharing part of her piece of black bread.

They told me this story that schoolteachers sometimes came buy and let the kids even throw empty cans, and packages at starving Russians.

I know is at with the “innocent German civilian myths” ( Saubermann und Sauberfrau" and the "Das haben wir nicht gewusst (we didn’t know and basically were clueless). I find it very plausible. This is not to shame current day Germans but plausible historyfrom 1933-1945.

In the National Socialist system the children belonged to the state and they were indoctrinated. The willing executioners were not just those stereotype Hollywood villians but also very well dressed middle class teacher who cared more for his garden than starving people.

The massive number of German war crimes happened by design and not just a result from emotions in combat.

PS I will put up the memoir of a German Child Soldier. I don’t even blame the kids who were taught to be utterly indifferent. But I do blame the teacher and perpetrators of the Sauberpeople myth.

I don’t get whether the schoolteachers are buying from them empty cans or they are allowing kids to throw empty cans at Russians? If they are throwing empty cans at russians, what would be the point of throwing them at starving russians (to enrage them?).

PS : That is a great story. Were your grandparents were able to forgive the Germans after the war or did they have lingering sense of hatred towards them?