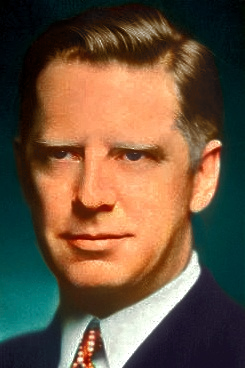 New York –
Nobody on our side of this war will drop a tear over the finish of Count Ciano. He was a nasty, grafting, continental society louse and a drawing-room parasite, who was way over his head in anything bigger than gin rummy and would have been at home and a social success in Palm Beach and some of our more expensive dumps in New York.

The only reason he ever amounted to anything in the Fascist regime was that he married Il Bum’s daughter and it was his marriage that finally caused him to fall before a firing squad.

But Ciano’s death probably can be taken as a horrifying promise of things to come as the Germans fall back into their own country because if Hitler would kill Mussolini’s own son-in-law and leading protégé, even though Ciano had backslid, what will be hesitate to do?

The Nazis are desperate men now who know that they must die for crimes already done and it is reasonable to expect that they will destroy everything behind them in their retreat to doom.

Had served Germans rather well

Ciano had served the Germans rather well and had lived on terms of personal acquaintance, although, of course, not of friendship with Hitler, who has never had a friend even in his own party, and if Il Bum had not been a prisoner himself, living on table-scraps and borrowed time, he undoubtedly would have been allowed to live in some prison until the arrival of the Allies.

But Mussolini had no power to save him and he died like Hitler’s own old comrades who went out in the purge.

This execution is shocking because of the family relationship involved, for civilized human beings do not execute their own kinnery and the Italians are as sentimental as the rest of us about family. In this savage killing, Hitler acted in the Duce’s name and thus kicked the Italians in the teeth, so God only knows what he will do in his retreat.

He might even shoot the Pope for having correspondence with the enemy and dynamite St. Peter’s and the Vatican as he blew up the post office in Naples. It is a refresher on the fiendishness which the world underestimated when Hitler early in his career destroyed a Polish countess accused of spying by having her head chopped off with a long-handled meat ax in the hands of an executioner wearing formal evening dress.

Lidice, the long, cold pogrom of the German Jews, the slaughters of hostages, occurred when Hitler was strong and on the offensive. The sort of enemy that the normal mind pictures would begin to moderate his ferocity in retreat in the hope of saving his people, even if he knew he himself was doomed.

No such thing as family

But Hitler set out to rule the world or obliterate as much of civilization and its personalities and works as he could, and there is no reason to expect that he will go easy, even to save the Germans from obloquy as long as the world lasts.

To Hitler, there is no such thing as family. He has been estranged from his own. He is queer and immeasurable by any human or civilized standards. He has butchered Germans as a farmer beheads a chicken on the stump and his deliberate spot-bombing of old churches in London may be taken as a portent of more stunning shocks to come.

It is futile to call Hitler a fiend, monster and butcher just as an expression of hatred. That stage passed long ago. The world knows what he is, but do we realize what he is capable of doing in the final days of a career that no human being could have imagined 10 years ago?

We did have civilization then and not even history gave us an example of Hitler’s satanic, personal indifference to the ideals and morals of a world which had come a long way since man emerged from the caves, his contempt for the opinions of mankind as to his people as well as himself, and, on the positive side, his delight in killing and destroying.

Of itself the killing of one Fascist by orders of another is nothing. But the peculiar surroundings of the Ciano execution give it greater and probably prophetic meaning.

Notre Dame? Boom! Then flames and ruin beyond salvage. Why not?