I have a question in regards to the Pacific Theater. My question is why didn’t the Allies attack Western New Guinea during 1943 instead of striking on the Eastern Papua New Guinea? 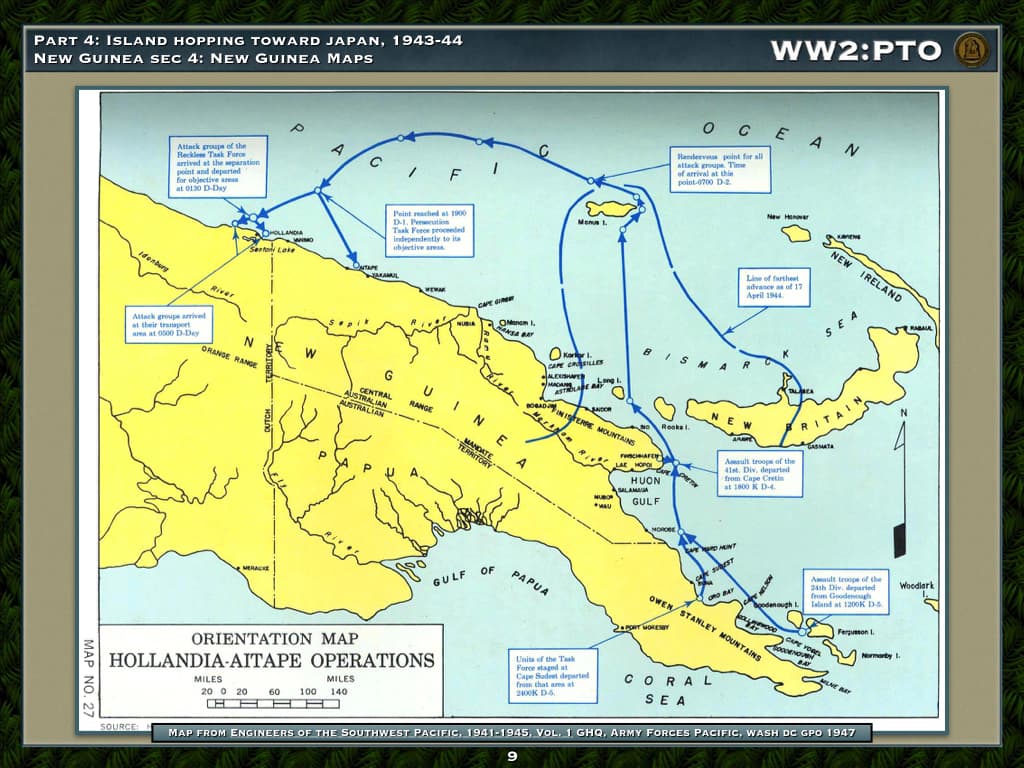 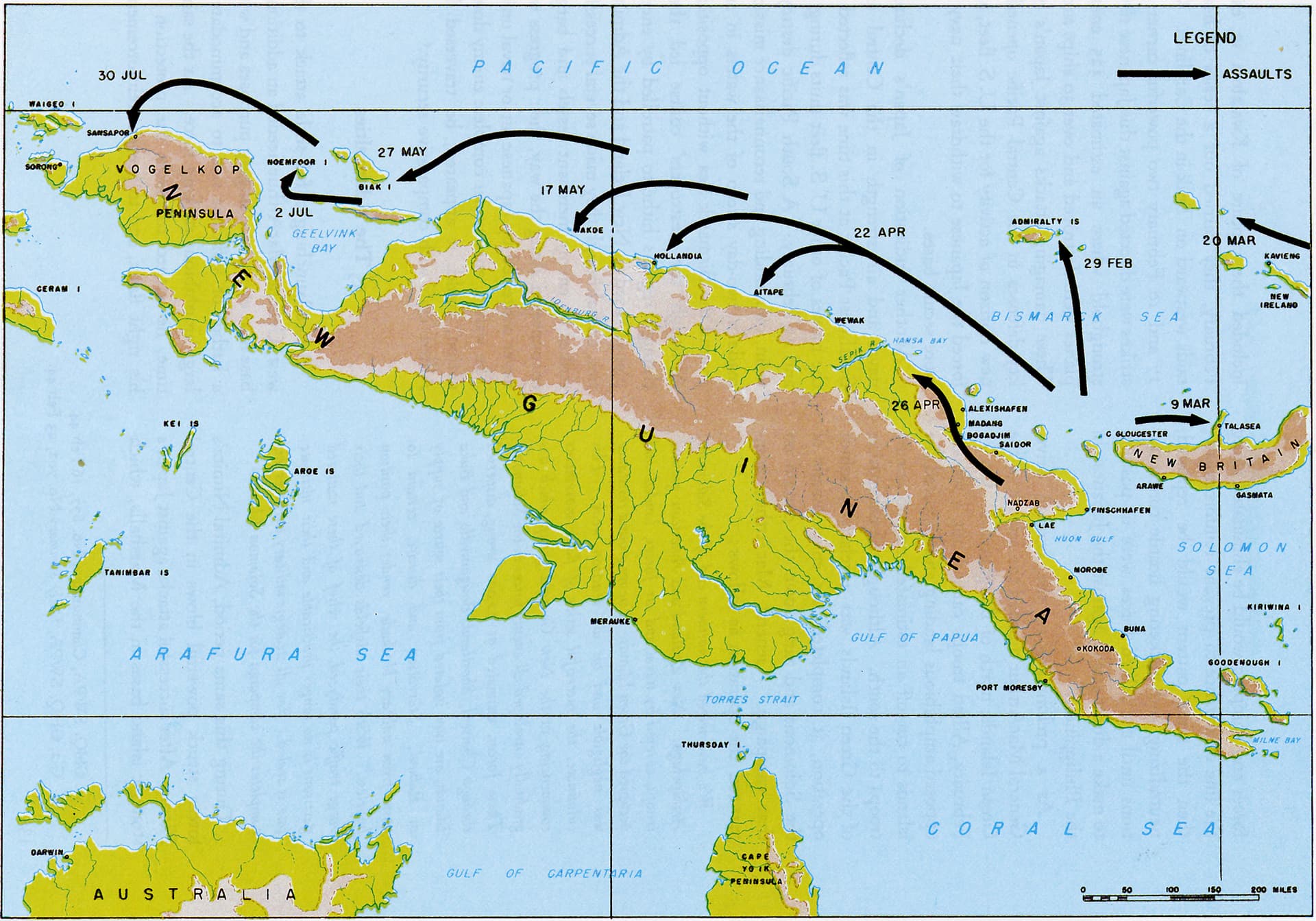 As one can observed, throughout the years of 1943-44 and later on 45, the Allies advance up along the Eastern and Northern areas of Papua New Guinea. Yet, the Southern and Western areas of New Guinea were relatively left unscathed by the war. My question is why didn’t the Allies attack in this area of New Guinea? This could have made MacArthur near his main objective, the Philippines. Was it due to logistics, few ports and airfields, exposing MacArthur’s right and Nimitz’s left flank, or heavy garrison Japanese troops? Hopefully this can be answer. Godspeed.

You have asked an excellent question about why the campaign on New Guinea turned out the way it did. The best way to start off is with a photograph and videos. First is the photograph take of Port Morseby before the start of World War 2. 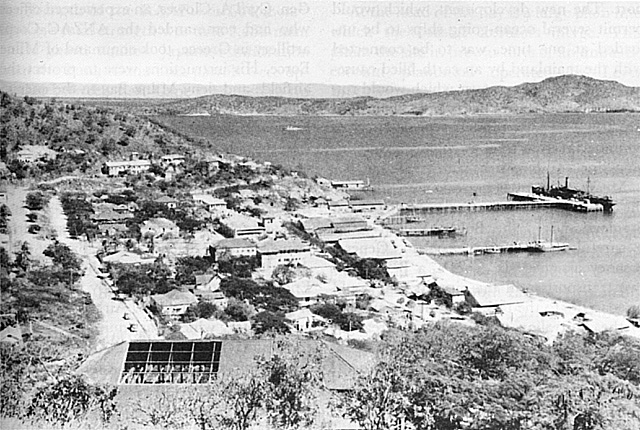 Port Morseby is the only seaport on the island of New Guinea that can dock a single merchant ship.

Here are three videos found by accident during a garage sale in Southern California taken by an unknown merchant marine sailor who filmed as a hobby.
(Papua New Guinea and Solomon Islands 1940 - Part One - YouTube)
This is a video taken of New Britain and Rabaul. Rabaul is the only town in either New Guinea, the Bismarck Archipelago, or the Solomon Islands with a population of 1,000 Australians, 1,000 Chinese, and 2,000 indigenous inhabitants. There are an additional 2,000 Chinese and 20,000 indigenous inhabitants living in villages with 5 days walking and sailing distance of Rabaul. Before World War 2, the Australians would build a fighter airfield at Lakunai and a bomber field at Vunakanua which is the reason why the Japanese decided to invade Rabaul and seize Kavieng for a port anchorage. The Japanese Navy would then recklessly extend outward to land at Lae where a crude airfield was created to supply gold prospectors in the Markham River Valley around the crude airfield at Wau, Buka Island where the Australians were starting to build an airfield for reconnaissance, and Buin on Bougaineville where the Australians were constructing another airfield for reconnaissance.
(Papua New Guinea and Solomon Islands 1940 - Part Two - YouTube)
This second video is of Buka Island off the northern tip of Bougainville Island. This is typical of this region before World War 2. There is only a single plantation house there. Along the coastline of all of these islands are isolated government posts, missionary churches, and coconut plantations in which chopped coconuts are dried out and then loaded aboard passing merchant ships by canoes to be processed for coconut oil.
Papua New Guinea and Solomon Islands 1940 - Part Three - YouTube
The last video is of Port Morseby. Port Morseby is one of the few areas on New Guinea where an airfield can be built. Just before World War 2, Australian surveyors found an open area 5 miles from Port Morseby where an airfield can be built that can handle the weight of a B-17 Flying Fortress Bomber. This was 5-Mile Airdrome which was part of the ferry route of B-17 bombers flying from the United States to the Philippines. This airfield was the only reason why Japan cares about Port Morseby.

The overwhelming majority of the people living in this region of this region of the world are either lithic (stone age) hunter-gatherers or neolithic (new stone age) agriculturalists with the majority using slash/burn farming. The vast majority of the people of New Guinea will not have contact with the outside world until visited by anthropologists in the 1950’s and 1960’s. There are no cities, ports that can handle more than one ship, industries, roads or railroads in this region in World War 2. The Japanese and the Allies are fighting over the few spots of land in this region that airfields can be built on.

The only true place of value is this region was Sorong on the western end of New Guinea. The Dutch discovered oil at Sorong before World War 2 but decided not to drill because it would depress the price of oil. During the Japanese invasion of the Dutch East Indies in January 1942, the Japanese would land naval infantry to take Sorong and then proceed to occupy Manokwari, Mumi, Nabiri, Bawai, Sarmi, Hollandia, Babo, and Fakfak to establish bases for seaplanes to patrol the area.

For southwestern and southern New Guinea, there are no Dutch settlements outside of isolated coastal Christian missionary churches between Fakfak and Merauke. The Australians and the Dutch did have a garrison and an airfield operating at Merauke. Plans were made to advance along the southern coastline of New Guinea but were abandoned due to the fact that they could not afford to waste the resources if the landing sites could not handle airfield construction. The Allies did not want a repeat of the Aola Expedition on Guadalcanal of November 4, 1942 where they attempted to build an airfield but failed due to the construction equipment sinking in mud up to the engine blocks.

As the Japanese were advancing, General Douglas MacArthur ordered a team of American and Australian engineers to be flown to New Guinea and scour every piece of flat ground for airfield construction. This is how Milne Bay and Hood Point were discovered. Then these engineers found the perfect spot for airfield construction at Dobodura (the present city of Popondetta). All that is needed for most of Dobodura is gasoline to set a brush fire and then lawnmowers and rakes to clear the ground to construct an airfield.

2 weeks after the Allied engineer team discovered Dobodura, the Japanese Army lands at Buna Station 12 miles to the north and then occupies Dobodura in their advance southward along the Kokoda Trail. Luckily for the Allies, the Japanese never realized the aviation gold mine that their soldiers had captured.

Dobodura was the reason for the bloody siege on Buna-Gona. While the battle was going on, American and Australian engineers would frantically construct the first of the 15 airfields at Dobodura. 11 of these airfields would be interconnected by taxiways. Dobodura would become the main Allied airbase in eastern New Guinea.

So, this was how the campaign developed in New Guinea in World War 2. The Allied forces advanced northward to Lae to take the airfield to use against Rabaul while the Japanese built more airfields to contest the Allied advance which provided more objectives for the Allies to seize. The same thing occurred in the Solomon Islands during the Guadalcanal campaign. This was how a massive campaign of World War 2 built up for control of a region of the world that exported dried coconut flakes.