ORSON DOESN’T RATE AS A HOLLYWOODSMAN
….
‘Genius’ doomed to remain an alien in ‘Never-Never Land’
….
By Paul Harrison

Hollywood, Jan. 4 –
There have been lots of estimates of the genius and odd character of Orson Welles, but there is no doubt regarding his standing as a typical Hollywoodsman. He doesn’t rate at all. 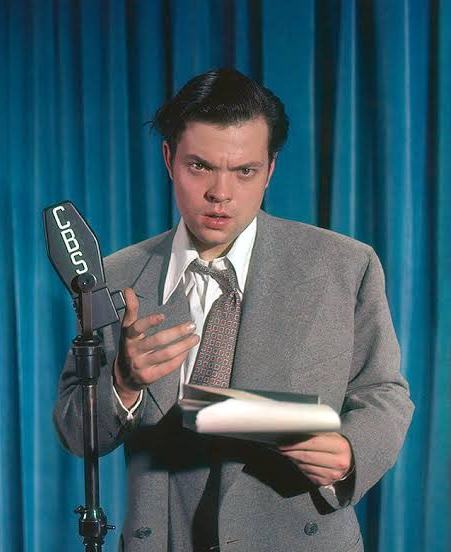 Whatever the fate of his forthcoming Citizen Kane, and however bright his cinematic future after that, Welles seems doomed to remain an alien in Never-Never Land. He just doesn’t do the things or encounter the experiences always being attributed to Movietown celebrities.

For example, no claim ever has been made that a studio gate-man has failed to recognize Welles in makeup, barring him from the lot. Nor has any story beer written about how, while on location, Welles was bitten or at least threatened, by a black widow spider. Apparently, too, he never has risked his life to save any member of his company from a rattlesnake.

During a year and a half in Hollywood, the writer-director-actor-producer has not insured himself against falling in love; nor has he taken out policies on his eyebrows, larynx or whatever. The Schizophrenic Indians haven’t made him an honorary chief. He has not been named mayor of some California ghost town, nor has the Merchant Tailors’ Guild of Cracked Elbow, Ia., ever selected him as Hollywood’s best-dressed man. Neither has the sophomore class of Miss Flintpuss’ School for Young Ladies named Welles as The Man With Whom I Would Like to be Cast Away on a Desert Island.

Any follower of press agent yarns will agree these few circumstances make the young man unique. But the list of nonconformities goes on and on:

No young female admirers ever have been planted as stowaways in Welles’ staterooms on trains or ships. He never has been “lost” in Mexico, nor on a disabled yacht. He doesn’t even own a yacht. He encounters no thrilling adventures while piloting his own plane. He doesn’t even own a plane. He doesn’t want to own a plane. He is not buying an island where he can get away from it all, nor does he own a San Fernando Valley ranch which will provide security in his old age.

Welles does not sit up nights planning a new type of internal combustion engine, nor has he even made application for a patent on a better mousetrap. He seems to be subject to ordinary ills, and when he has a cold there is no attempt to explain that his picture is being delayed by a recurrence of a baffling tropical disease contracted while leading an expedition in search of Paul Renfern. Nobody named him as the Oomph Boy of 1940.

Publicists have not tried to say Orson Welles collects snuff boxes, jade dragons or champagne corks. Neither have they arranged for a pretty admirer to handcuff herself to him at a premiere. He never has been photographed with a Great Dane, astride a skyrocket, or whipping up some crepe suzettes.

Almost every other notable in town, if you can believe the stories, has unearthed a fine gold nugget while planting petunias, nor has been willed a fabulously rich mine by a prospector once befriended. Welles doesn’t seem to have any such luck. He wasn’t a great athlete at college; in fact, he never went to college. His house hasn’t been burglarized, nor did he ever thwart a holdup with a neat bit of jujitsu.

Only once did it appear that Welles might adapt himself to Movietown. That was when it was reported he had developed an amazing allergy. After eight months here without his beginning a picture, it was explained that the emulsion on movie film made him violently ill.