Operation Typhoon had begun in bright sunshine and General Gotthard Heinrici, the commander of the German 43rd Army Corps, was optimistic: ‘After our triumph at Kiev, we now stand at the gates of the decisive battle in Russia,’ he wrote. ‘We hope with confidence that it will also bring us a great success. The overall situation in the east will largely depend on what is achieved by us in the near future.’

The architect of Typhoon, Field Marshal von Bock, was deploying his forces with considerable skill. With three infantry and three Panzer armies at his disposal – supported by the planes of the Luftwaffe’s Second Air Fleet – he used his advancing infantry, with massive air support, to pin down the opposing Soviet forces while his Panzers broke through their weakened flanks. His tactics were working brilliantly. General Heinrici’s corps – part of the Wehrmacht’s Second Army – engaged the Russians along the length of the Bryansk Front, allowing Germany’s most able tank commander, Colonel General Guderian, to lead his Second Panzer Army in a rapid dash to Orel, turning the entire Soviet position. Guderian then drove his tanks behind Yeremenko’s armies, cutting off all means of escape. 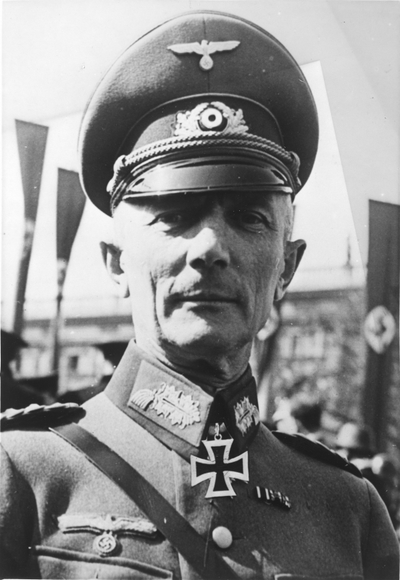 The shattering impact of Typhoon’s first few days seemed to justify Heinrici’s hopes of a grand triumph. When Guderian’s Panzers reached the town of Bryansk on 7 October, Major Shabalin declared starkly: ‘History has never witnessed anything like this defeat . . . We have not seen a single one of our aircraft in the last few days. We are giving up cities with practically no resistance.’ He judged that Soviet commanders had irretrievably lost control of the battle, and unaware of Yeremenko’s exploits concluded bitterly, ‘it is rumoured that these idiots are already on their way back to Moscow.’

Yet amidst this heady German optimism, Colonel General Erich Hoepner was feeling uneasy, confiding his doubts to his diary. Summarising the campaign’s first five days, he began positively enough. ‘The military situation is developing well – nearly 30 Soviet divisions will soon be surrounded,’ he stated. Then his tone changed. ‘Things have not been done as I have suggested – that much is clear to me – or even more Russian troops would have been seized.’ Hoepner, the commander of the Fourth Panzer Group, had wanted a deeper encirclement of Russian forces, one that would have trapped all their remaining reserves as well, allowing his tanks to bear down on Moscow as fast as possible.

Hoepner felt a real sense of urgency about the attack on the Russian capital. He shared the fears of Hans Jürgen Hartmann serving with Army Group South, that when all seemed lost the Red Army was still capable of regrouping and conjuring up fresh reserves, seemingly out of nowhere. They must not be allowed to do this again. And he knew that after three months of campaigning many German units were seriously depleted, their men exhausted and their equipment worn away through constant use. Hoepner also recognised that the logistics for Typhoon – the continued supply of fuel, food and ammunition for German forward units – would soon become a problem as the lines of communication extended, particularly once the weather changed. And it was the approach of the autumn rainy season, which would turn the Russian dirt roads into quagmires within weeks, even days, that worried him the most. 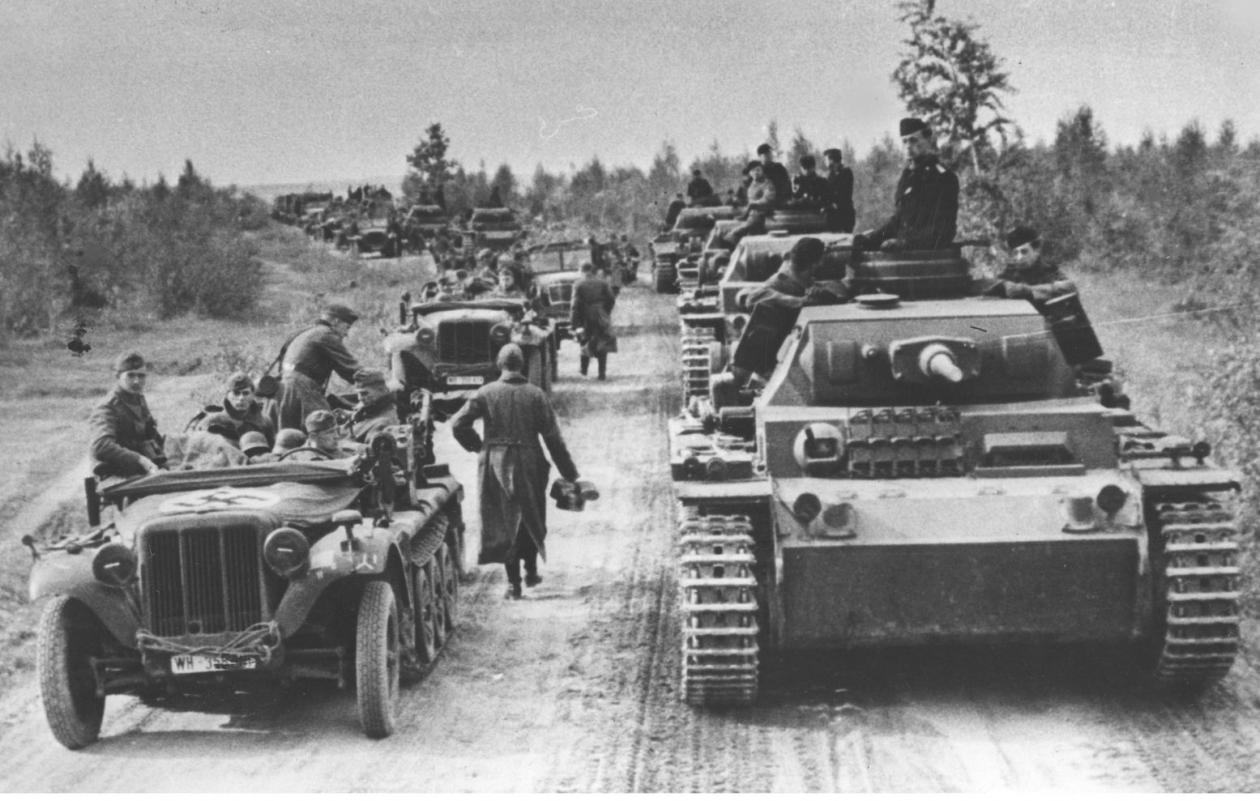 Yet Hitler and the German high command seemed entranced by the encirclement battles, as if the vast haul of prisoners and equipment would bring an end to the struggle by itself. They did not believe that the Red Army had the will or the resilience to keep fighting once these battles were finished. There seemed plenty of evidence for such a view. Stalin had been caught unprepared by Typhoon. After several days of fretful dithering he did make an important decision, recalling General Georgi Zhukov – the Soviet Union’s most able commander – from the defence of Leningrad. Zhukov was now given a new mission, to defend the Soviet capital. On the evening of 7 October the general arrived at the Kremlin to find Stalin alone in his office encumbered with a heavy cold. ‘A very difficult situation has developed,’ the Soviet leader said, pointing to a map of the approaches to Moscow, ‘but I can’t get a detailed report on the actual state of affairs.’ Zhukov was despatched to find out the situation on the ground.

Bryansk was now in enemy hands and its defending armies encircled, so Zhukov drove instead to Lieutenant General Konev’s Western Front HQ, reaching it at 2.30 a.m. The news there was scarcely any better: four of its armies were also surrounded by the Germans. Zhukov phoned Stalin and told him bluntly that there were no longer any troops left to stop the Germans reaching Moscow.

Konev’s Western Front had suffered a calamity even greater than that at Bryansk. The Wehrmacht’s Fourth Army and Ninth Army had struck against Konev’s front-line forces, while two of their Panzer armies turned his flanks. Once again the Germans quickly got behind Soviet positions and Konev rapidly lost control of events. A plea to Moscow to allow a withdrawal met with little success: ‘I reported to Stalin about the situation,’ Konev recalled, ‘and he listened to me, but made no decision. Communications were disrupted and further conversation ceased.’

Faced with the threat of four of his armies being encircled, Konev pulled the commander of the Soviet Sixteenth Army, Major General Konstantin Rokossovsky, out of the battle line, ordering him back to Vyazma to organise a counter-attack. But Rokossovsky’s efforts to rebut the Germans proved as ill-starred as Yeremenko’s had been. There was no time for reinforcements to be sent; instead, when Rokossovsky arrived at Vyazma he learnt to his consternation that German tanks had already entered its suburbs. Rokossovsky got out as fast as he could. 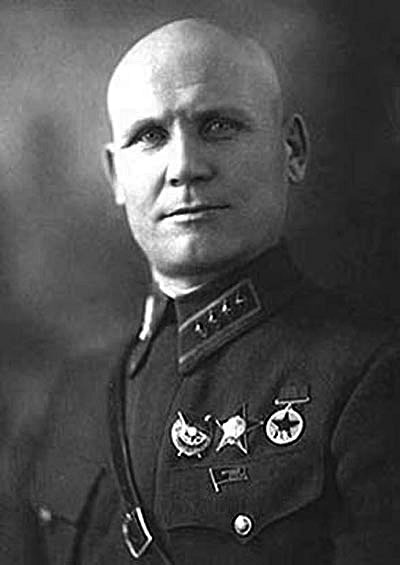 As the Soviets rushed about in confusion, the Germans bearing down on Vyazma were fighting with confidence and cohesion. Major General Wolfgang Fischer’s 10th Panzer Division had broken the Desna river line on the first day of Typhoon, seizing vital road and rail bridges and pushing past the remaining Russian forces. Exploiting his initiative, Fischer continued his advance by the light of the full moon and on the following day had already reached the town of Mozalsk, 40 miles behind the Soviet positions. Fischer’s Panzer charge built up momentum, overtaking unsuspecting Red Army columns still moving in the opposite direction. The bewildered Russians surrendered to him without resistance. Struck by the confusion of the enemy troops, Fischer disarmed his prisoners and sent them rearwards without even bothering to give them a military escort.

Fischer maintained his rapid pace, and when twelve Russian trucks smashed into his column, just ahead of his own vehicle, he remained unperturbed. The division’s combat journal recorded that all staff officers were engaged in the fight that followed, Red Army vehicles were quickly disarmed and thirty Soviet prisoners captured. By 6 October Fischer’s force was closing in on Vyazma and with fuel running low and fresh Soviet forces in the area, he struck quickly. Noticing that the town’s defences were weak, he launched an attack that same evening. At 7.15 p.m. the airport was seized; two hours later Fischer’s men broke into Vyazma’s suburbs forcing the Soviet commander, Rokossovsky, to flee in the opposite direction. It was an astonishing success.

Rapid, well-coordinated armoured warfare was the hallmark of German blitzkrieg, their devastating ‘lightning war’, and it still seemed that the Russians were unable to counter it. On 7 October, when the German 7th Panzer Division arrived from the north and linked up with Fischer, a shocked and bewildered Konev realised that most of his armies had now been trapped. All he could do was to relay these gloomy tidings to General Zhukov. Zhukov, taken aback, then tried to ascertain the situation at Marshal Budenny’s Reserve Front. He was told that some of Budenny’s force, hurriedly gathered together and with little military training, had disintegrated in panic and the whereabouts of the remainder was unknown.

Zhukov decided to find out for himself. As he drove on through the night, searching for the Reserve Front commander, a dense fog descended over the countryside. Alarmingly, when Zhukov eventually reached Budenny’s HQ there was no sign of its commander and no one seemed to know where he was. When Zhukov finally tracked him down he found the Soviet marshal in a state of collapse, only able to repeat, again and again, that he had nearly been captured by the Germans. He had lost touch with his staff for three whole days during the crucial opening phase of the battle.

Zhukov was witness to a catastrophe. The twin encirclement battles of Bryansk and Vyazma had left three quarters of a million Red Army soldiers surrounded. It was the Wehrmacht’s greatest success of the war with Russia. As Zhukov was learning of the calamitous state of the Western and Reserve Fronts, General Petrov took up ‘temporary command’ of the Soviet armies encircled around Bryansk. He was less than enthusiastic about his new post. He recalled that another Soviet commander, General Dmitry Pavlov, had been executed by Stalin at the beginning of the war for failing to hold back the Germans. It seemed an unfortunate precedent. ‘Now our high command will shoot me too,’ he told Major Shabalin on 7 October. ‘Why say that?’ Shabalin responded in surprise. ‘The threat is implicit,’ Petrov said carefully, ‘in the phrase “temporary command of the front”. As things stand, I have no idea what is happening to our armies – I cannot find out the strength of my forces, or even where they are.’

The Germans speeding past Bryansk were better informed. General Heinrici’s forces sealed off Petrov’s Fiftieth Army, separating it from the two other armies of the Bryansk Front, then pushed on to the town of Kaluga. On 8 October Heinrici wrote triumphantly: “The enemy was totally surprised by our latest attack. Since our preparations took place out in the open, one would have thought this scarcely possible, yet the Russians knew neither the time of the assault nor its direction, and my army corps – after breaking through their positions on the first and second days of the battle – was able to advance without opposition. The struggle is far from its end, and I expect the encircled enemy to try and break out from these pockets with desperate courage. But I believe the Red Army has been knocked out and will quickly lose the remnants of its forces defending Moscow. At the end of the month Russia will be without a capital”

The same day German soldier Heinrich Larsen in Army Group Center sent a letter to his wife*: ‘Victory over the Red Army will be ours,’* he declared emphatically. ‘The mighty Führer has promised to end this campaign victoriously before the beginning of the winter. My darling, your wish for a successful end to the war will be fulfilled soon. Moscow, the stronghold of worldwide Bolshevism, will fall in a few days and the remainder of the Russian forces will be annihilated together with their capital . . . Maybe when you read these lines, the war in the east will be over.’

Larsen’s letter – and its sweeping prediction that Moscow would fall within days – was again a product of the Siegseuphorie sweeping the German Army. It was an inflated sense of invincibility, for there were warning signs that the Russians might still be capable of rallying, if given an opportunity. In a clash near Mtensk on the Orel-Tula motor highway, Guderian’s advance formations were briefly disconcerted when the Red Army employed a new design of tank, the T-34, and counter-attacked vigorously. Guderian’s troops were shaken by the speed and armoured strength of this vehicle, which was far superior to their own tanks. Although the T-34 was not yet available in large numbers, the Wehrmacht’s intelligence had been entirely unaware of its existence.