Operation Gauntlet was an Allied Combined Operation from 25 August until 3 September 1941 during the Second World War. Canadian, British and Free Norwegian Forces landed on the Norwegian island of Spitsbergen in the Svalbard Archipelago, 650 mi (1,050 km) south of the North Pole.

Coalmines on the islands were owned and operated by Norway at Longyearbyen and by the Soviet Union at Barentsburg; both governments agreed to their destruction and the evacuation of their nationals. The objective of Gauntlet was to deny Germany the coal, mining and shipping infrastructure, equipment and stores on Spitsbergen and suppress the wireless stations on the archipelago, to prevent the Germans receiving weather reports.

Gauntlet was a success; the Germans had not known of or had been able to challenge the expedition, the raiders suffered no casualties, the local civilians were repatriated, several ships were taken as prizes and a German warship was sunk on the return journey.

The Svalbard Archipelago lies in the Arctic Ocean about half way [650 mi (1,050 km)] between northern Norway and the North Pole. The islands are mountainous, their peaks permanently covered with snow and some are glaciated. There are occasional river terraces at the bottom of steep valleys and some coastal plain. In winter, snow covers the islands and the bays ice over. The main island, Spitsbergen, to the west, has several large fiords along its west coast; Isfjorden is up to 10 mi (16 km) wide. The Gulf Stream warms the waters, making the sea ice-free during the summer. There are settlements at Longyearbyen and Barentsburg (inlets along the south shore of Isfjorden), in Kongsfjorden (Kings Bay), north of Isfjorden up the coast and in Van Mijenfjorden to the south. The settlements had attracted colonists from several countries and the Svalbard Treaty of 1920 neutralized the islands and recognised the mineral- and fishing-rights of the participating countries. Before 1939, the population consisted of about 3,000 people, mostly Norwegians and Russians, who worked in the mining industry. Drift mines were linked to the shore by overhead cable tracks or rails and coal dumped over the winter was collected after the summer thaw. By 1939 production was about 500,000 long tons (508,023 t) a year, roughly evenly divided between Norway and the Soviet Union.

On 26 July 1941, the Canadian Corps in Britain offered to provide sufficient troops for a landing on Spitsbergen, to garrison a naval refuelling base for four months and then withdraw before winter. Force 111 was to be raised, comprising two battalions of a Canadian infantry brigade less transport and attached units including an anti-aircraft battery. The Canadians offered the HQ of the 2nd Canadian Infantry Brigade (Brigadier Arthur Potts) and its signal section, the 3rd Field Company Royal Canadian Engineers (RCE).

The Canadians embarked on RMS Empress of Canada in Glasgow, sailed for No. 1 Combined Training Centre at HMS Quebec (shore establishment), Inveraray on Loch Fyne and began rehearsing the landings. On 11 August, Potts was told that the operation had been considerably reduced in scope, and on 16 August, Potts was ordered to ensure “that the Germans get no advantage out of Spitsbergen between now and March, 1942”. The operation was to be a landing of a force sufficient for the demolition or the removal of mining equipment, coal and the transport and harbour infrastructure. Wireless and weather stations were to be disabled; the Russians were to be transported to Archangelsk and the Norwegians to Britain.

Russian and Norwegian civilian representatives and a Norwegian army officer, the Governor Designate of Spitsbergen, would accompany the expedition to manage civilian matters. Force 111 returned to Surrey except for the 2nd Canadian Infantry Brigade HQ with 29 Canadian officers and 498 other ranks from the Edmonton Regiment (Major W. G. Bury) and the 3rd Field Company RCE (Major Geoffrey Walsh), 84 men of the Saskatoon Light Infantry (M.G.) and administrative parties, 14 British officers and 79 men, including 57 Royal Engineers and a Norwegian infantry party (Captain Aubert) with three officers and 22 other ranks, a total of 645 men.

The expedition sailed from the River Clyde on 19 August in Empress of Canada and rendezvoused with Force A (Vian) with the cruisers HMS Nigeria, HMS Aurora and the destroyers HMS Anthony, HMS Antelope and HMS Icarus. The ships put in at Hvalfjörður in Iceland to refuel and departed on the evening of 21 August. Late on 22 August, the destination of the force was revealed to the troops. Force A met the oiler Oligarch and its trawler escorts on the evening of 24 August, west of Spitsbergen and as the force approached, an aircraft made a reconnaissance flight over Isfjorden, the large inlet on the western coast of Spitsbergen island, the most populated area of the archipelago. At 4:30 a.m., Icarus landed a signal party at the Kap Linne wireless station at the entrance to the fiord, where they were welcomed by the Norwegian operators. The big ships entered Isfjorden, steamed on to Grønfjorden at 8:00 a.m. and anchored off the Soviet mining township of Barentsburg. Potts went ashore to confer with the Soviet authorities about the embarkation of the population and its delivery to Archangelsk as the Canadians occupied other Soviet and Norwegian settlements along Isfjord.

The evacuation proceeded slower than planned because the Soviet Consul wanted machinery and stores loaded on Empress of Canada as well as personal effects. Empress of Canada set out for Archangelsk at midnight on the night of 26/27 August, escorted by Nigeria and the destroyers. Aurora stayed behind to guard the landing parties and assist in the embarkations from the remoter settlements. The Canadian engineers set fire to about 450,000 long tons (457,221 t) of coal dumped at the mines, fuel oil was poured into the sea or burned and mining equipment was removed or sabotaged, during which, Barentsburg was mysteriously burned down. On the evening of 1 September, the Empress of Canada and its escorts returned from Archangelsk to Green Bay. 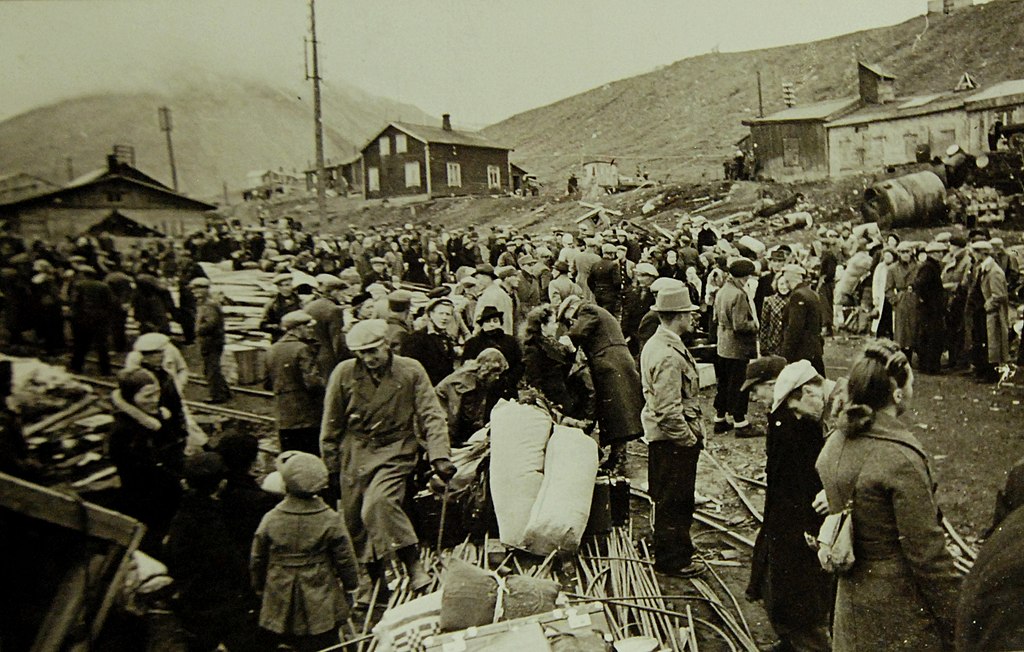 Evacuation of Norwegian and Russian miners

Normal business was kept up at the wireless station by the Norwegian Military Governor Designate, Lieutenant Ragnvald Tamber except for bogus reports of fog, to deter Luftwaffe air reconnaissance. Three colliers sent from the mainland were hijacked along with a whaler, icebreaker, tug and two fishing boats. On 2 September, about 800 Norwegians boarded Empress as did 186 French prisoners of war, who had escaped from German captivity and been interned in the USSR until the German invasion. Force A sailed for home at 10:30 p.m. on 3 September, with 800 Norwegian civilians and the prizes, after a ten days’ occupation, having never been in darkness. Anders Halvorssen preferred not to join the Norwegian army-in-exile, hid and remained on the island. The final wireless message was transmitted on the evening of 3 September and the sets at Barentsburg, Longyearbyen, Kap Linné and Grønfjord were destroyed; as Force A made its return journey, a German station was heard calling Spitsbergen. The spurious weather reports had led to the cancellation of Luftwaffe weather reconnaissance flights by the Wettererkundungsstaffel (Wekusta 5) 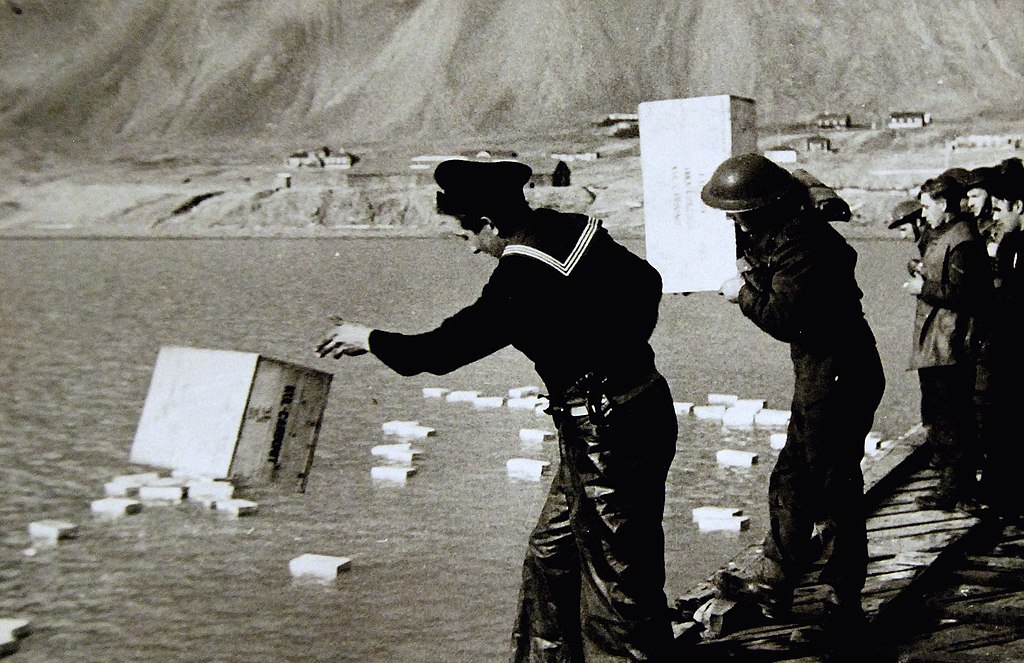 On 5 September a Luftwaffe sortie was flown over Svalbard and the crew found Spitsbergen deserted and the coal dumps on fire. Wekusta 5 resumed flights and on 10 September the crew saw Halvorssen waving to them at Longyearbyen. The crew saw a river terrace at Sònak in Adventfjorden, about 4 mi (6 km) away, which was about 1,500 yd (1,372 m) long and could serve as a runway. On 25 September, a Ju 52 landed safely at Sònak but was unable to send a message due to the low power of its radio; a Ju 88 managed to land on 27 September, finding the party and the Norwegian defector. A plan to establish a temporary base was abandoned after an odd illumination, resembling searchlights, was seen in the sky; the two aircraft hurriedly took off for Norway in case it was the British.

The British cruisers diverted towards the Norwegian coast to hunt for German ships and early on 7 September, in stormy weather and poor visibility, found a German convoy off Porsanger, near the North Cape. The cruisers sank the training ship Bremse but Barcelona and Trautenfels, two troop transports with 1,500 men of the 6th Mountain Division aboard, escaped into the fjord.[ HMS Nigeria was thought to have been damaged hitting a wreck. After the war it was surmised that HMS Nigeria had hit a mine. Force A reached to the Clyde on the night of 7/8 September.

Gauntlet was a success; the Germans had not known of or had been able to challenge the expedition. The raiders had suffered no casualties, the local civilians were repatriated, several ships were taken as prizes and one German warship was sunk on the return journey. After the operation, the British expected the Germans to occupy Svalbard as a base for attacks on Arctic convoys but the Germans were more interested in meteorological data, the Arctic being the origin of much of the weather over western Europe.

soviet miners, not Russian. There were many Russians working in mines in Belgium, none of them would like to go to ussr where they would be executed. In Belgium they built orthodox churches and have many cemeteries. Spitzbergen had soviet miners working there.

Thanks for posting, I visited the Russian mining Colony in 2009, really cool with 24 hour daylight in Summer😎.