An article in a Greek news site, on April 22, summarizing the Nazi looting of Greek Antiquities during WW2. 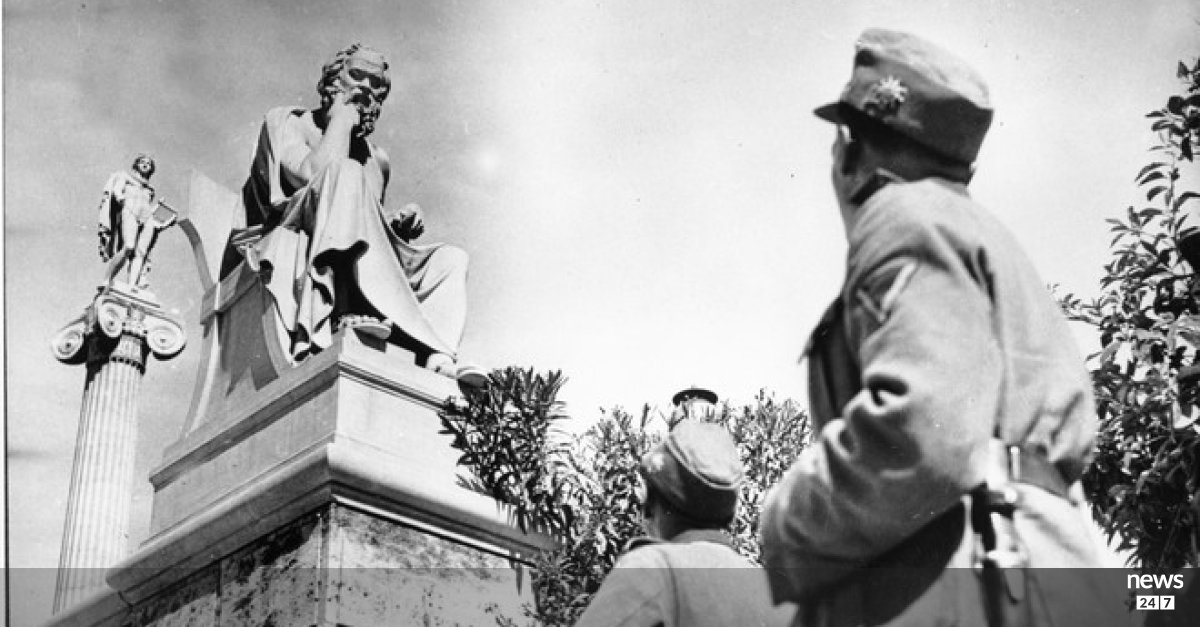 Here is the translation:

On 12 October 1944, the last German occupation troops left Greece, and thousands of citizens flooded the streets, celebrating. Alongside the attempt to rebuild a destroyed country, another effort began. Underneath the blood-soaked soil, some archaeologists tried to dig up what they attempted to save from the very first day of the war. Monuments and antiquities that were hidden with anxiety to save them from the occupying forces.
Adolf Hitler’s pronounced admiration for Greek antiquity, the disasters during the bombings, the looting from high-ranking Nazi soldiers, the looting from simple soldiers, and illegal excavations to export antiquities abroad have contributed to the immense destruction of the national cultural heritage. 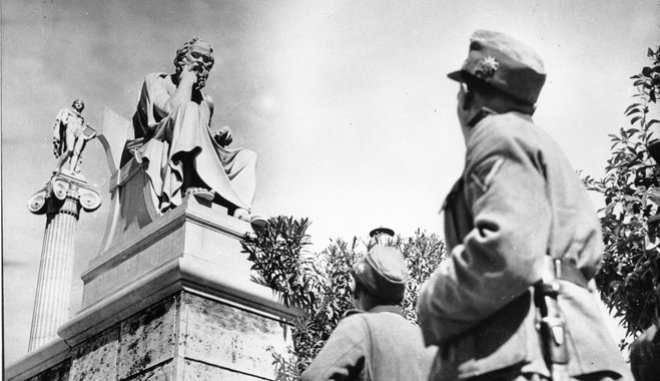 “Everything is done according to international law. The German army is a host of authority and cannot give account to the Greek archaeological service” was one of the usual answers given by German troops to the protests by the Greek authorities that detected looting of antiquities. The plunder of antiquities from Greece is decisively contributed to the “Military Service for the Protection of Art” (the Kunstschutz) and the famous “Reichsleiter Rosenberg Taskforce” created by the Nazi theorist, Alfred Rosenberg.

A characteristic story of rapture is that of Herakleiotissa, a Roman statue representing an aristocrat of Thessaloniki.
In March 1944, while works are being made for the construction of trenches in the center of Thessaloniki, the statue of Herakleiotissa was accidentally revealed. A Roman art sculpture of exceptional art, 2,11 meters high. A few days later the Nazi occupying forces are organizing an event and handing over the statue to the Greek authorities. The photographs are published in the press and Nazi propaganda is spreading to highlight the country’s cultural heritage. Hitler, however, urgently dispatches the statue to the Linz city museum, which was intended to became the third-largest cultural capital of the Third Reich. Two months after the statue was handed over to the Greek authorities, German soldiers took it and carried it to Vienna where it was exposed for two months. The statue was then handed over to the head of the Linz Museum, while it consecrated the homes of Goebells and Hitler himself in the Austrian Alps. 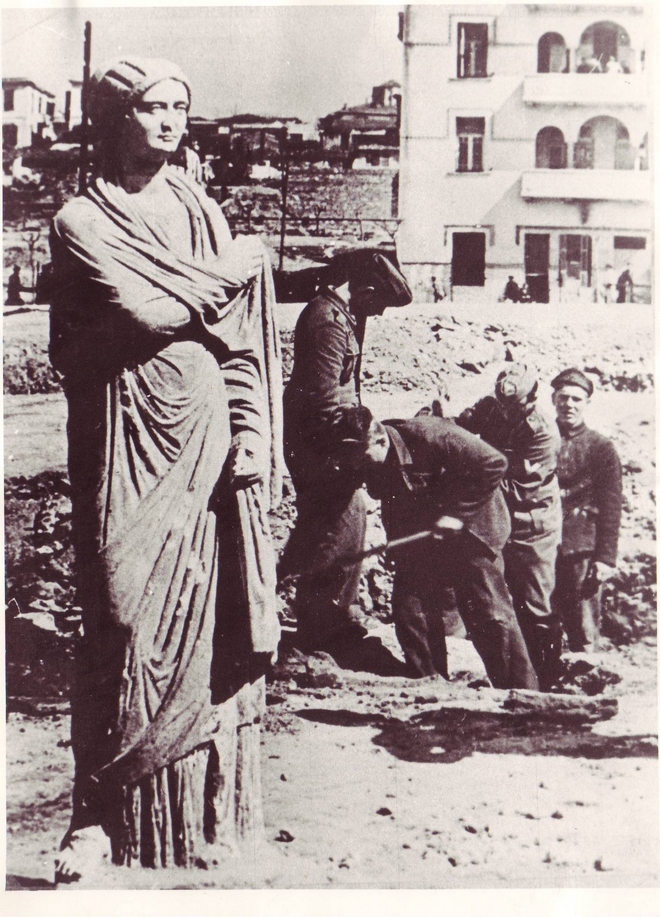 After the end of the war, the statue was located in an abandoned salt mine in Bad Aussee, Austria. It was transported to Munich, the central unit where stolen works of art from all over Europe were gathered to repatriate to their own countries. On November 2, 1946, Heracliotissa finally returned to Thessaloniki, being the first, up to current sources, repatriation of a looted statue after the war.

The destruction of the museum of Heraklion

And if the aristocrat of Thessaloniki survived the war, this was not the case with thousands of other works of art. In Crete, as archaeologist George Tzorakis pointed out in his research, the disasters were incomprehensible. As early as 1939, when it was clear that the war was going to come to Greece, the Ephorate of Antiquities led by Nicholas Platon and Basil Theofanides began a diligent attempt to hide the island’s cultural heritage in shelters, trenches and treasuries.
The greatest weight was given to the museum of Heraklion as it was the largest on the island and the most important finds were hosted. The archaeologists packed as much as they could and transported them to the shelter built under the museum, while others buried them in the garden and other places. Many of the works of art, however, could not be transported and guarded.
On the morning of Friday, May 23, 1941, after the rejection of the German ultimatum about the surrender of Heraklion, the bombing of the city resumed and continued on Saturday 24 May. The city was leveled.
The museum was no exception, taking bombs on its roof, resulting in enormous damage. 43 large clay antiquities from the Minoan Age (2600 to 1100 BC), sarcophagi, pithoi and funerary urns are destroyed and the frames and the windows are broken, leaving unsheltered what works have not been destroyed.
After the capture of the city, the museum was requisitioned, the precinct was fitted with pillboxes and later turned into a military hospital, a chemical warfare school, and a concentration camp for prisoners. As if this were not enough, the surviving exhibits were looted by the soldiers who either stole or disrupted the drawers, plates and the identities of antiquities.
By requisitioning the museum, however, the Nazis have automatically turned it into a major target of allied troops. So the building was bombed again in February 1944, this time by British airplanes.
The destruction of the Museum was only a part of the damage that occurred in Crete, where General Ringel acted. The maniacal collector of antiquities looted the Ariadne Villa Museum in Knossos, taking hundreds of exhibits in crates, and probably was responsible for the theft of antiquities from the Gortyn Collection. Corresponding examples are the royal Tomb of the Isopaths, the only tomb of the Minoan Era, which was destroyed in order for its structural material to be used for the construction of military installations.

Finding the spoils and attempts to repatriate

After the end of the war, efforts were made to repatriate the artifacts that were stolen from all over Greece. In warehouses, castles, salt mines, churches, caves, private and public collections, thousands of spoils have been detected since the fall of the Third Reich from all the conquered countries, including those that were stolen from Greece.
In 1946 the Department of Education published a documented report entitled “Damages of Antiquities by the War and the occupation armies.” The survey was made by archaeologists Christos Karouzos, Ioannis Miliades, Marinos Kalligas Grigorios Androutsopoulos and Nikolaos Zafiropoulos. The complete documantation of the stolen artifacts was extremely difficult, taking into account that in cases such as smuggling, the findings were not even reported by the occupation forces.
However, attempts to repatriate continue to this day. Cases such as the return of 73 artifacts from Germany to the Archeological Museum of Volos, the return of over 10,000 scraps of neolithic vessels and tools from a museum in Germany where they had been transplanted after an illegal excavation in 1941, and the repatriation of 26 other artifacts from Austria a few months ago.
The most recent example, illustrating also the lightness in which, in some cases, the treasures of the country were dealt with, was the return of an intact black-glazed kylix from the Classical period, that from April 6th is in the National Archaeological Museum after its voluntary rendition by a German citizen to the Greek Embassy in Berlin. According to the information he gave, the vase was found during excavations for the construction of a shelter from Wermacht during the Occupation, probably in the area of ​​Anchialos in Thessaloniki and was given as a gift to his grandfather, who then served in the German Navy , because he contributed to the discontinuation of the excavations once it became aware of the existence of antiquities on the ground.

5 Likes
What were some of the ways that the waring nations tried to protect their archives, national treasures, or valuable artifacts?
Paudow November 17, 2018, 12:53am #2

Charles Wheeler was part of Ian Fleming’s team looking for Nazi secret weapons in Europe. He is also Boris Johnson’s father in law.

He did a great BBC radio series in the Nazi theft of art:

From 1933 to the wars end, Nazi Germany systematically looted millions of works of art from individuals and the nations they went on to conquer.

The largest act of mass theft in history. But at the end of the war, with Nazi Germany in ruins, expert teams from the Red Army seized more than two and a half million art objects, some 12 million books and miles of archives.

Among them some of the great works of European art. Work beyond value. For Stalin these were reparations for the terrible damage and loss of life inflicted by the Nazi’s on the Soviet Union.

Trophies of war but the Red Army, in its haste to seize so much, also brought back many thousands of works of art belonging to the victims of Nazism.

All of it was locked away in absolute secrecy for 50 years, until two Soviet researchers revealed all.

The international fall out continues to reverberate around the world. Germany and Russia continue to argue over the fate of these treasures and those victims of Nazism able to identify their works want them back.

And now, finally, the world has been able to see stunning works of Impressionism, ancient Trojan treasures and other works that have returned like ghosts from the past.

But are these the last prisoners of war? Charles Wheeler, in the company of Anne Webber from the Commission for Looted Art, investigates their fate in Looted Art.