On their way to North Africa, a convoy of the Italian Royal Navy intersected with the fleets of the allied forces of the British Royal Navy and the Royal Australian Navy. It took place at about 30 miles east of Punta Stillo, located in Calabria. What ensued on that day—the 9th of July, 1940, would mark the first large naval engagement of World War Two.

On the 6th of July, an Italian flotilla took to the Mediterranean Sea on their way to Libya, to equip the Libya-based Italian forces with a large amount of supplies.

That evening two torpedo-boats left Catania to meet them outside Messina, and together their escort force joined the convoy from Taranto. The transports carried about 2,200 troops, 71 M11 tanks, 231 vehicles, 5,720 tons of fuel, and 10,445 tons of supplies.

The escort was a fleet of several destroyers, torpedo boats, heavy cruisers, light cruisers, and battleships, commanded by Admiral Inigo Campioni who divided them into three groups: A, which sailed ahead of the cargo ships, B, which sailed to the east, and C, which was the main battle group.

Meanwhile, the Allies were on their way out of Alexandria and headed towards Malta with supplies and specialist reinforcements. The convoy was made up of ships carrying civilians and fleet stores and their escorts which were also divided into forces A, B and C. Force A, an escort group, was made up of five cruisers and a destroyer.

Force B was comprised of five destroyers and the battleship— Warspite. Force C, the main battle group contained the battleships Royal Sovereign and Malaya , the aircraft carrier— Eagle , and eleven destroyers. The entire group was under the command of Admiral Andrew Cunningham.
On July 8th at 14:40, two Italian seaplanes caught sight of the Allied fleet. They shadowed the fleet for nearly four hours, but no hostilities were exchanged.

Following a bombing raid on the Allied fleet by 72 Italian bombers, Cunningham’s fleet steered towards Taranto, in a bid to cut the Italian fleet off their route. The Italian navy was completely unaware of the situation of the Allied fleets. Campioni’s force was scrambling about the sea in search of the enemy.

Campioni would, around 13:30, get a confirmed report on the position of the enemy from his cruisers. The allied fleet turned out to be 30 miles closer than thought.

When the two fleets caught sight of each other from a distance of 90 miles, the battle of Calabria began.

At noon, Cunningham made to close the distance so he could have a better firing range, but he could not accomplish this with the relatively slower Royal Sovereign and Malaya, so he took the Warspite battleship and surged on. Meanwhile, British Swordfish torpedo planes had been launched by Eagle , deploying several torpedoes on the Italian heavy cruisers, but missing them entirely.

The Italian Supreme Command instructed Campioni to attack one of the two enemy ships facing him, but Campioni’s fleet was, in fact, luring the Allied fleet closer and closer to an Italian airbase.

By 15:15, the Allied cruiser group took formation in front of Warspite . The Italian main force was 21,500 meters distant, and as the fleets opened fire from that range.

The Italians had the better range-finding system, they were able to pinpoint the Allies position quickly and began covering the distance rapidly while engaging. The Allies, however, had better gun-laying and were able to keep their rounds tighter. Generally, they were equally matched.

Within a few minutes of engagement, the distance between the two fleets fell to 20000 meters. But the Italian fire was getting dangerously close to the allied cruisers, HMS Neptune was hit by the Italian cruiser Giuseppe Garibaldi , and Vice-admiral John Tovey was forced to disengage. By 15:30, the firing ceased.
At 15:52, Campioni had decided to challenge Warspite . He moved Giulio Cesare and Conte di Cavour into position. Giulio Cesare opened fire while Conte di Cavour watched, waiting for Allied ships Malaya and Royal Sovereign to fall in within engagement range.

Warspite seeing two battleships up against her split her guns between the two ships, not knowing that Conte di Cavour was only a distraction. During the engagement, Cesare’s round missed Warspite but caught her escorting destroyers Hereward and Decoy, causing a minor damage.

Malaya, well out of range began firing rounds in a bid to confuse the Italians.

At 15:15, Italian heavy cruisers joined the fight against Warspite , but as the Allied cruisers came, they broke off from the action.

At 15:59, Giulio Cesare fired a shell, it landed very close to Warspite, narrowly missing it. However, at the same time, Warspite had fired her 381 mm rounds from a range of over 24000 meters, hitting Cesare’s rear deck.

The impact resulted in a chain of explosions as it set off the stored ammunition for anti-aircraft guns, killing two seamen and injuring several others. This would be listed among one of the longest-range naval artillery hits in history.

Shortly after Giulio Cesare was hit, her speed fell and Conte di Cavour took over. Meanwhile, the Italian cruisers kept the Allied cruisers engaged. Italian heavy cruiser Fiume had opened fire on the Allies heavy cruiser Liverpool, and soon she was joined by five other heavy cruisers: Zara, Bolzano, Pola, Gorizia, and Trento. Together they engaged the Allied cruiser battle group. In the process, Bolzano was hit three times by HMS Neptune.

At 16:02 the Italians generated smoke and the battleships got undercover as they withdrew to Messina.

During the process, both parties strove to make several torpedo runs but were not successful.

However, by 16:40, 126 Italian aircraft raided the Allied forces, reporting damages on Warspite, Malaya , and Eagle . Also, part of the Italian air force attacked the Italian ships. This was due to some misunderstanding, but none of the ships were harmed.

By 16:50, the battle ended as both sides withdrew.

After the battle both fleets turned for home. This allowed the Italians to claim a victory of sorts, as their cargo ships were already past the action by this time and sailed safely for Libya. Meanwhile, all Allied ships also reached Alexandria along with their escort. Although the battle was indecisive, Allied sources claimed that the Royal Navy asserted an important “moral ascendancy” over their Italian counterpart. Despite Italian superiority in aircraft due to the nearby land-based aircraft of the (Regia Aeronautica ) Italian air attacks proved ineffective, achieving little apart from the slight damage to Gloucester Despite this, the air arm’s battle reports were inflated to the point of claiming damage to half of the Allied fleet.

Overall, Allied gunnery proved superior, while the Italian salvoes were too widely dispersed due to technical reasons that were not to be overcome until the end of the conflict.

Just a suggestion, but sometimes some neat historical photographs of persons or events or equipment can help break up the big paragraph chunks and give people a better mental image.

Italian battleship Giulio Cesare firing during the battle of Calabria. 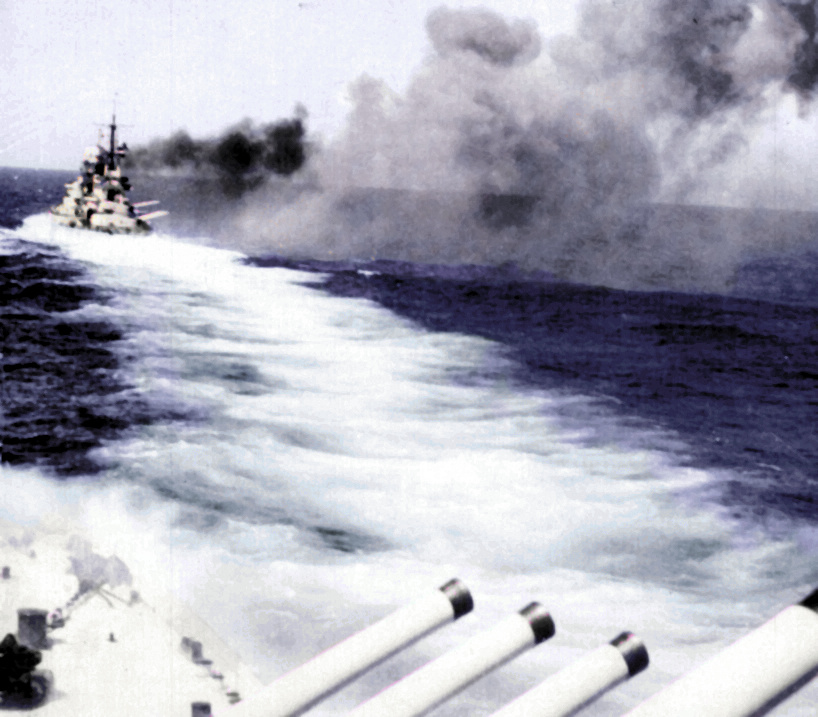 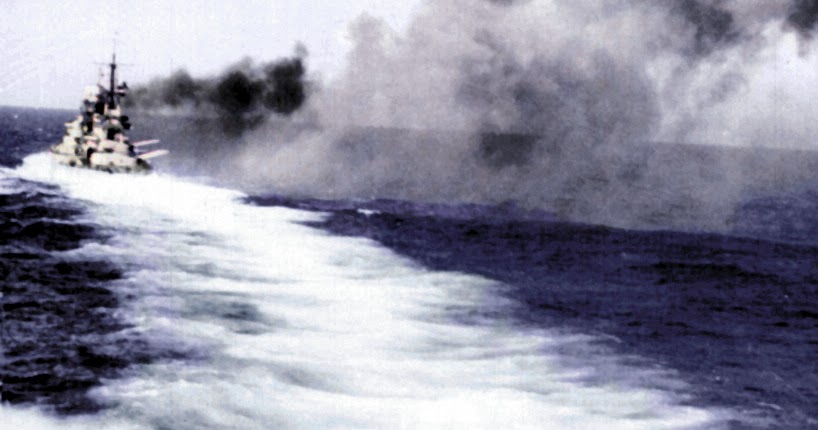 Follow Become a Patron! Italian battleship Giulio Cesare firing during the battle. The Battle of Calabria was a naval battle duri... 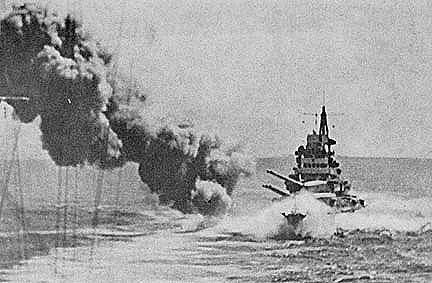 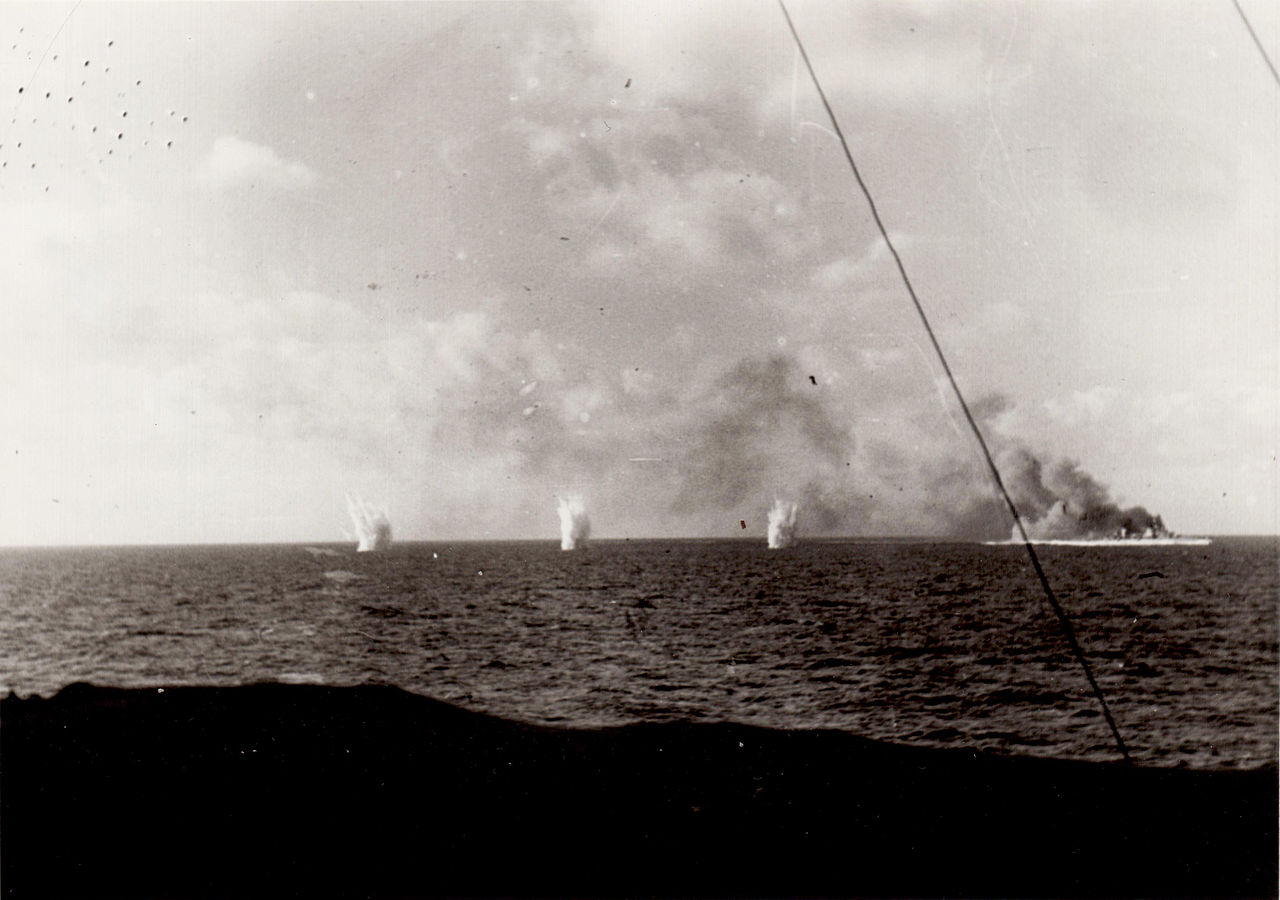 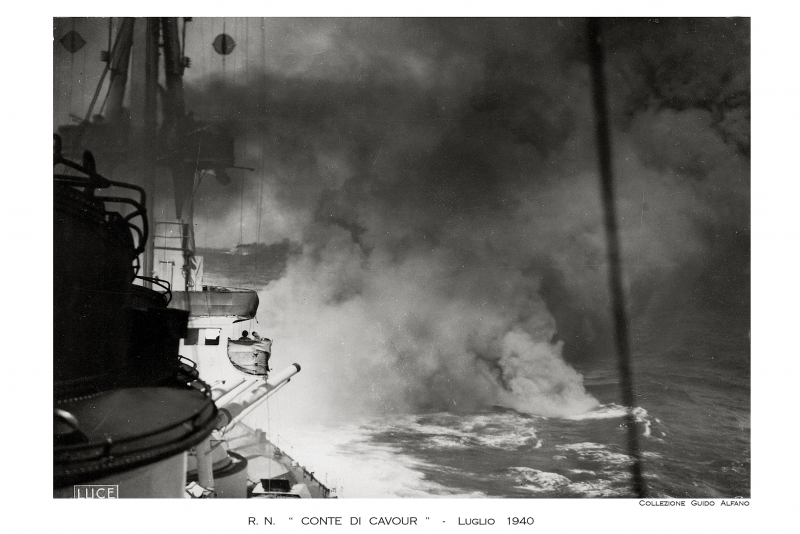 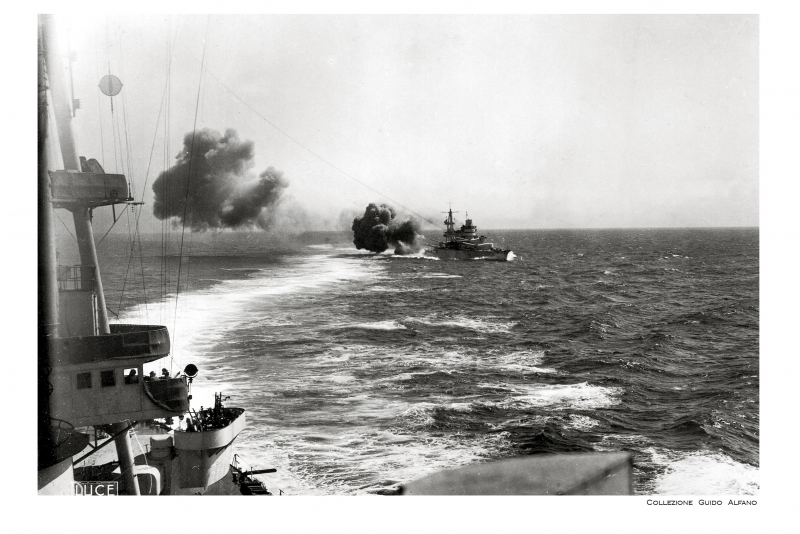 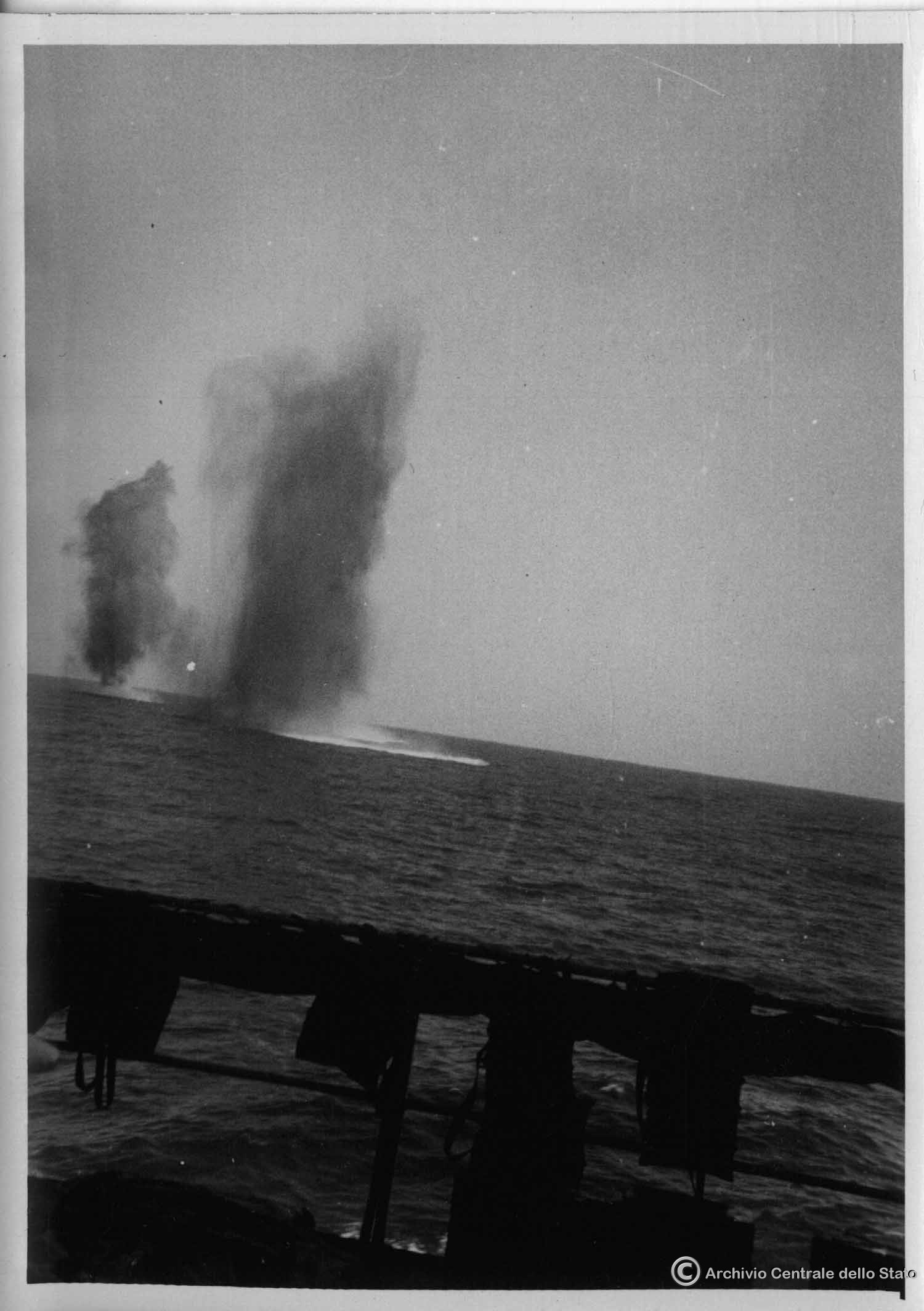 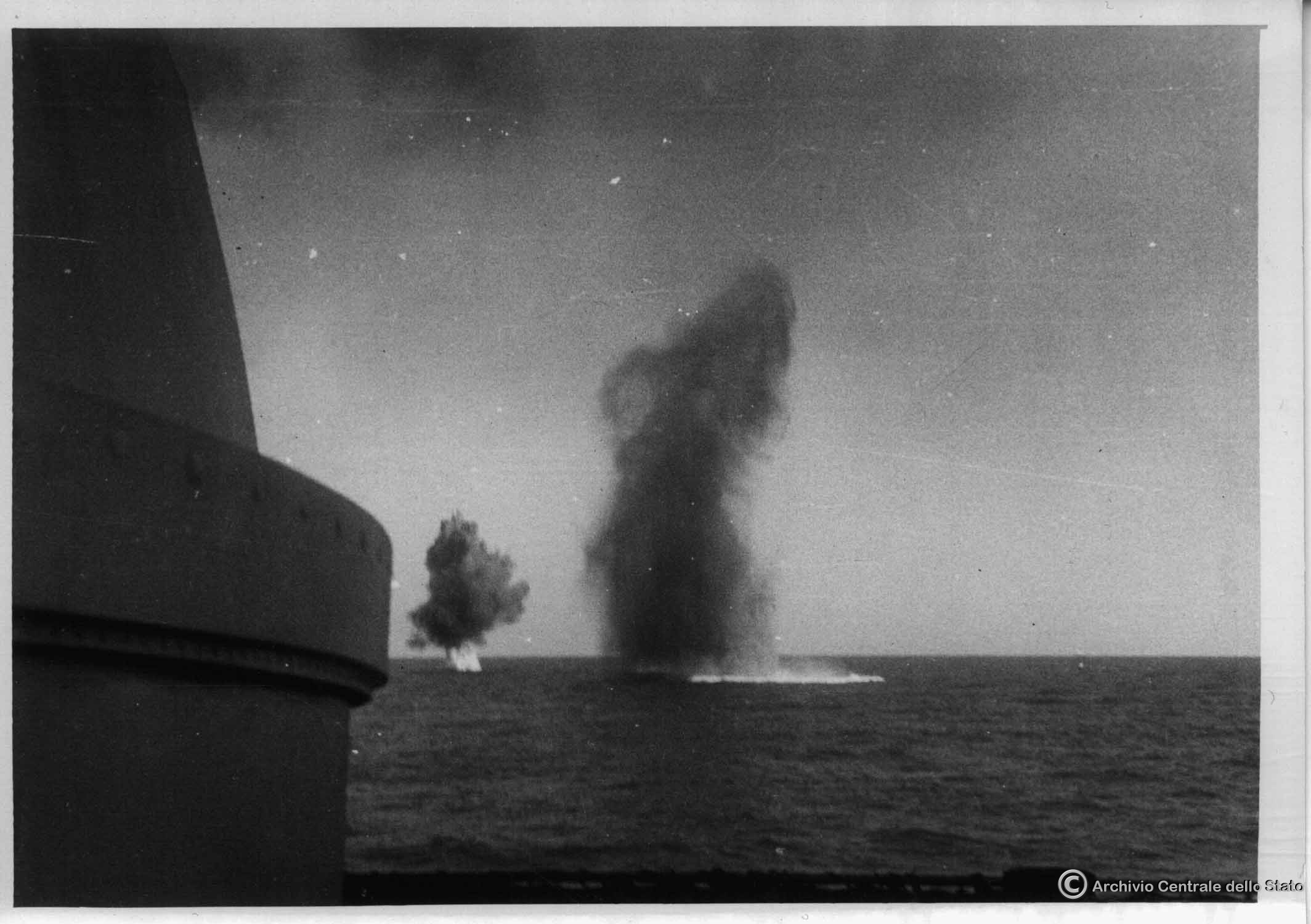 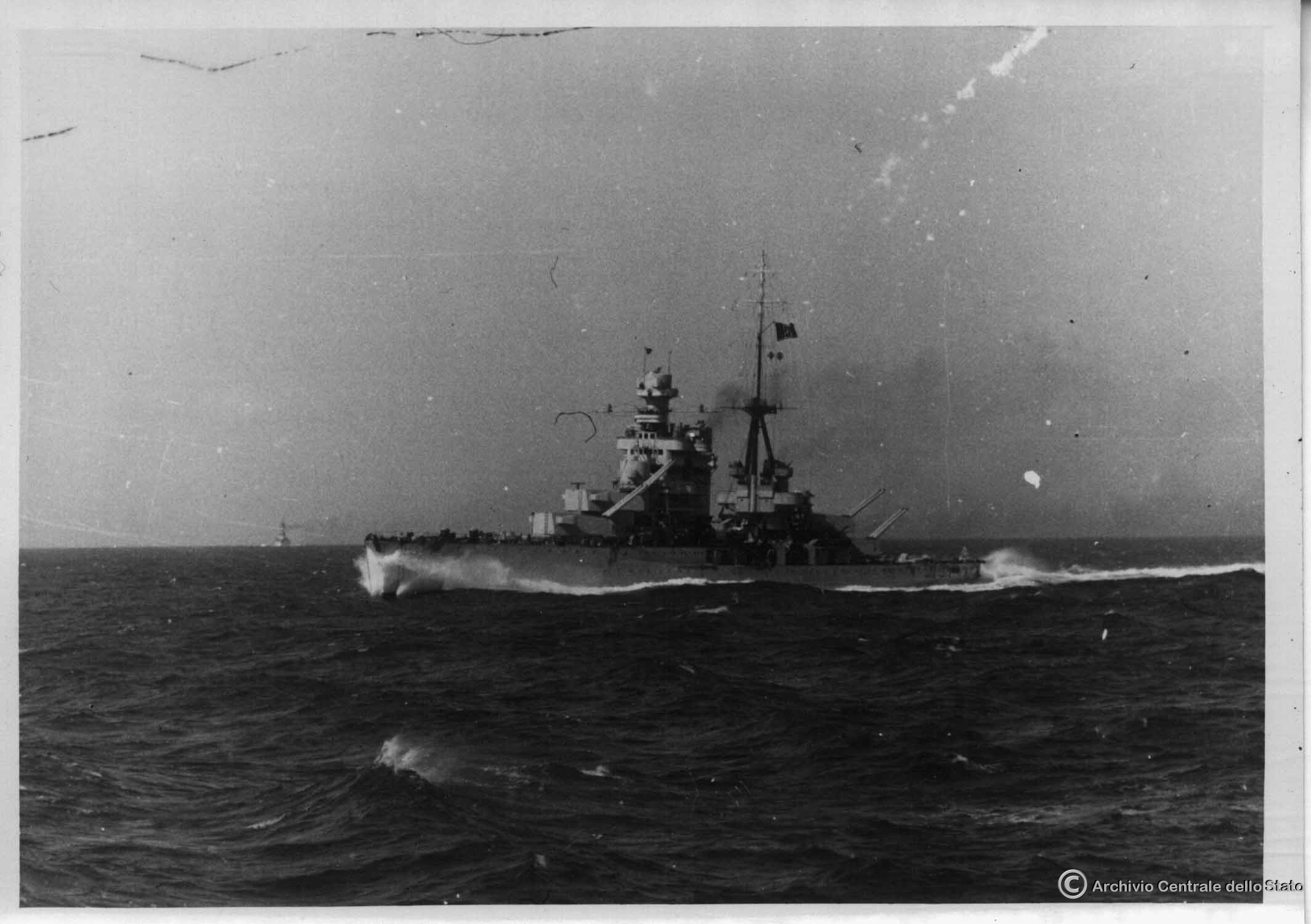 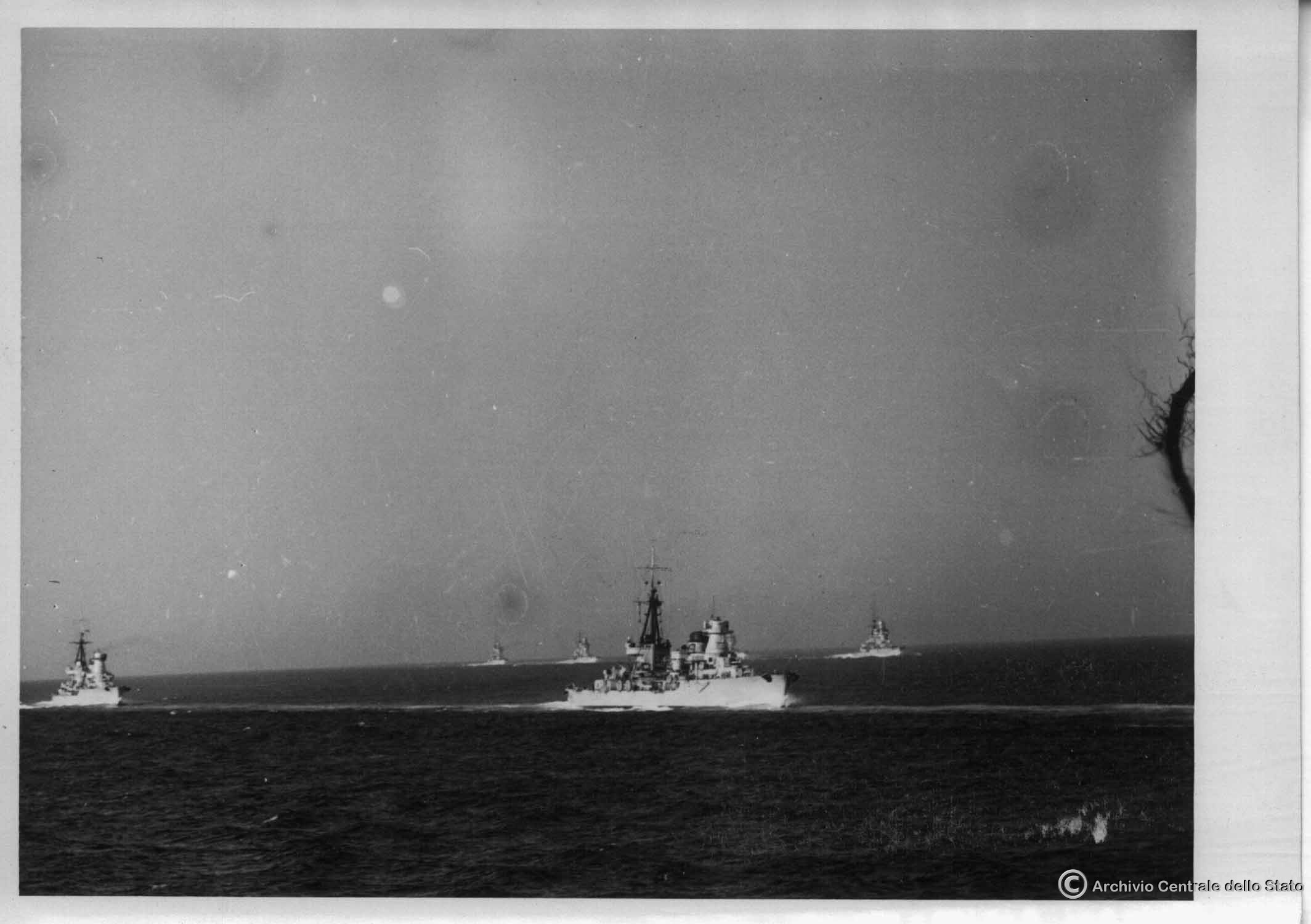 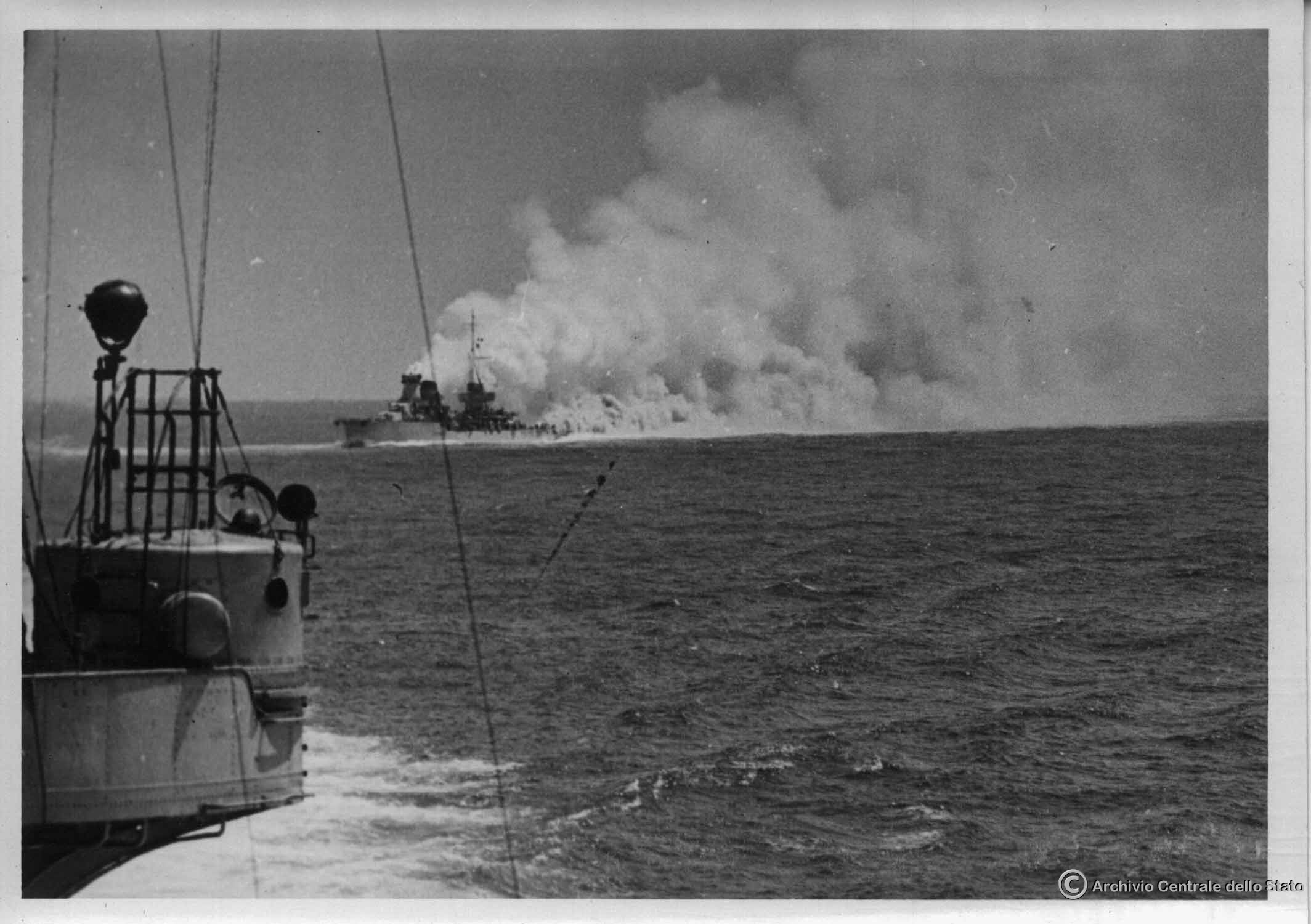 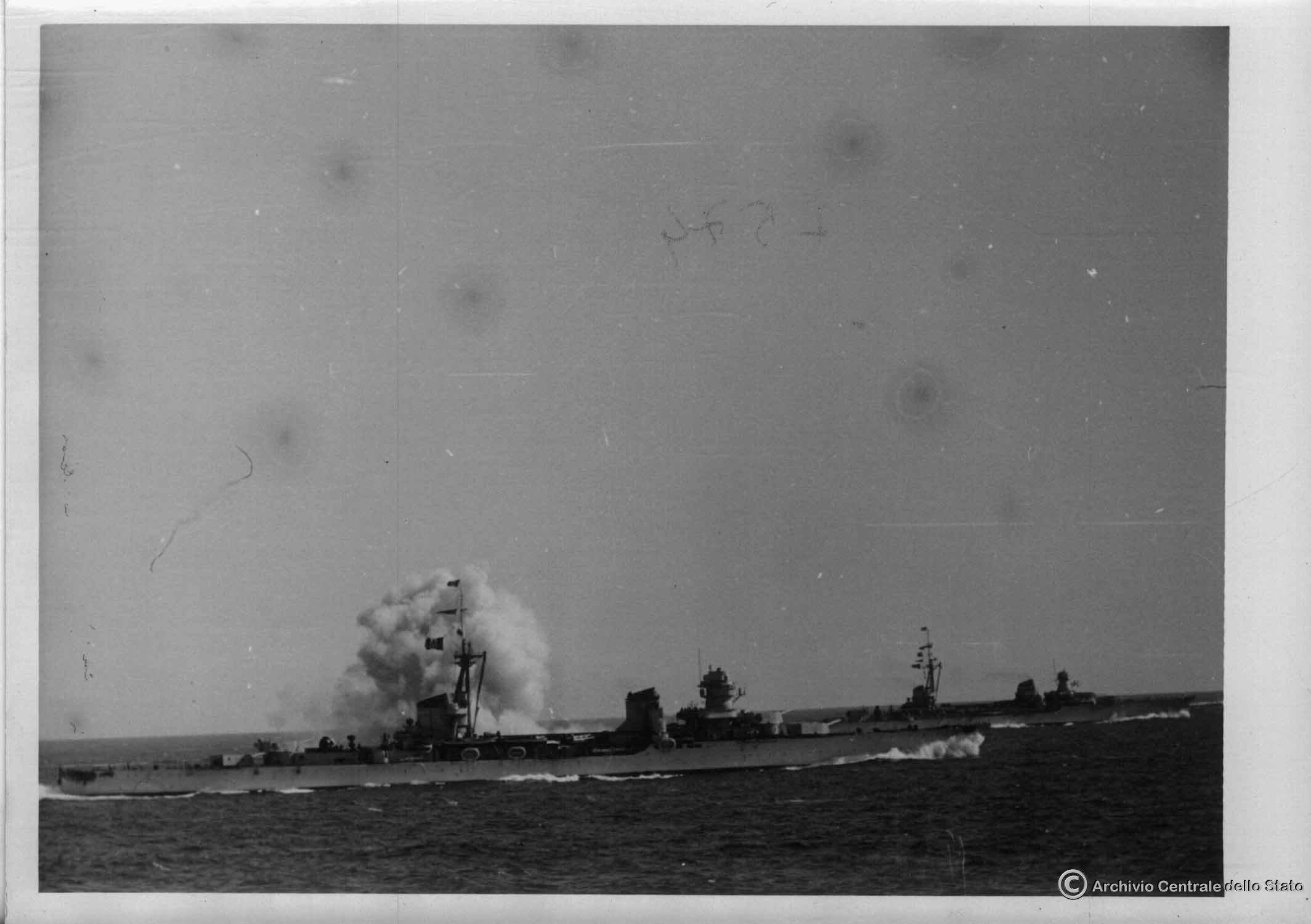 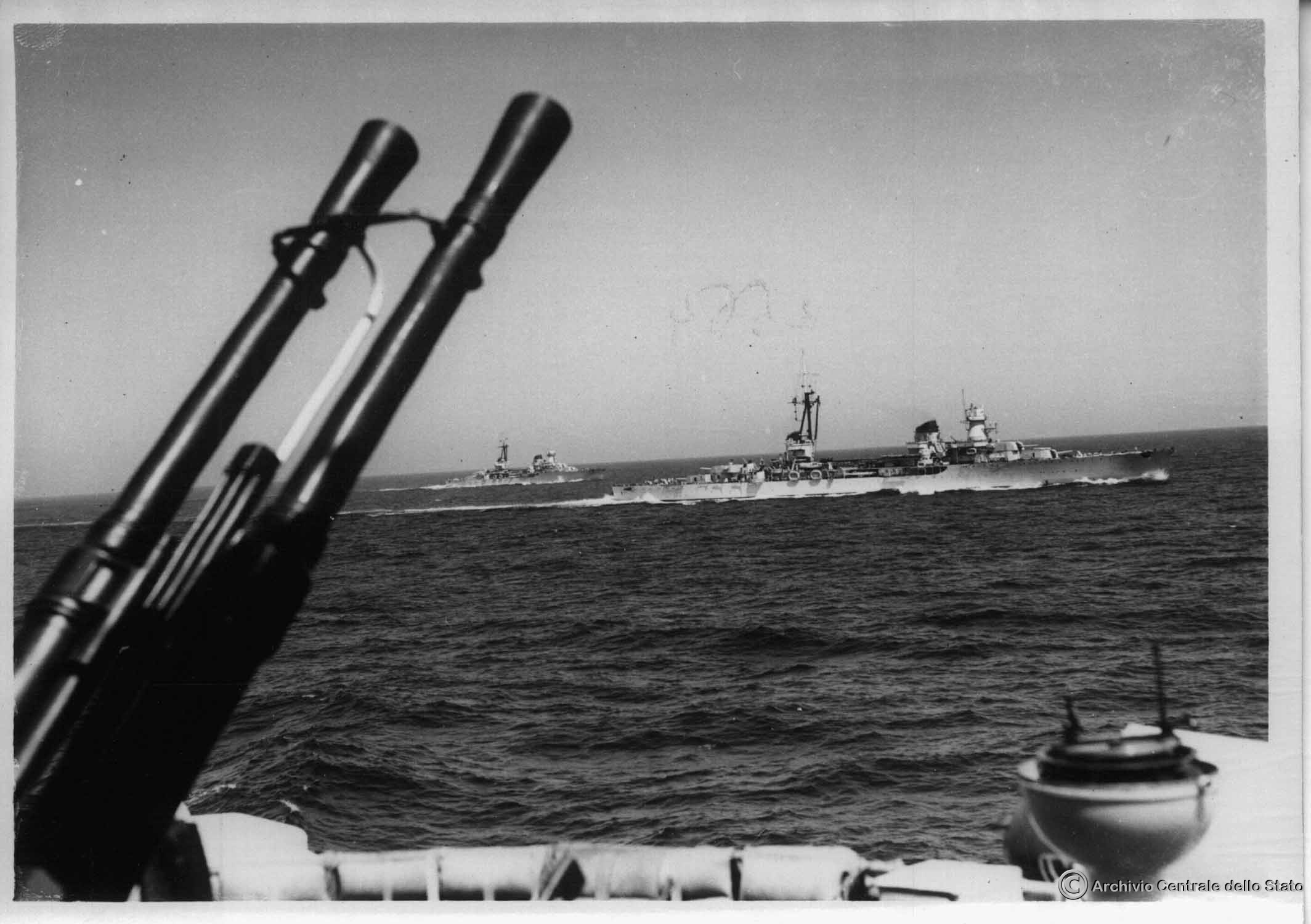 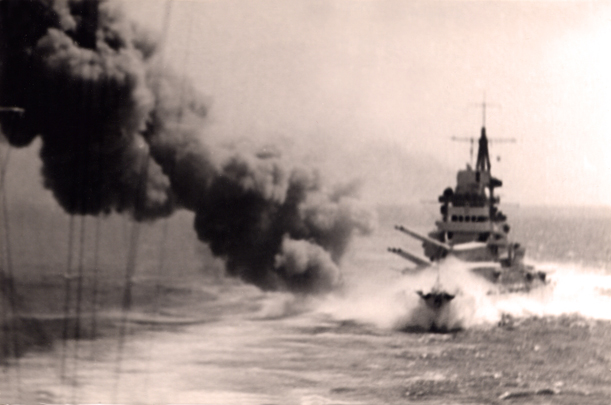 Thanks for providing these! Its really great to have people send in pictures and information from their own archive sources.