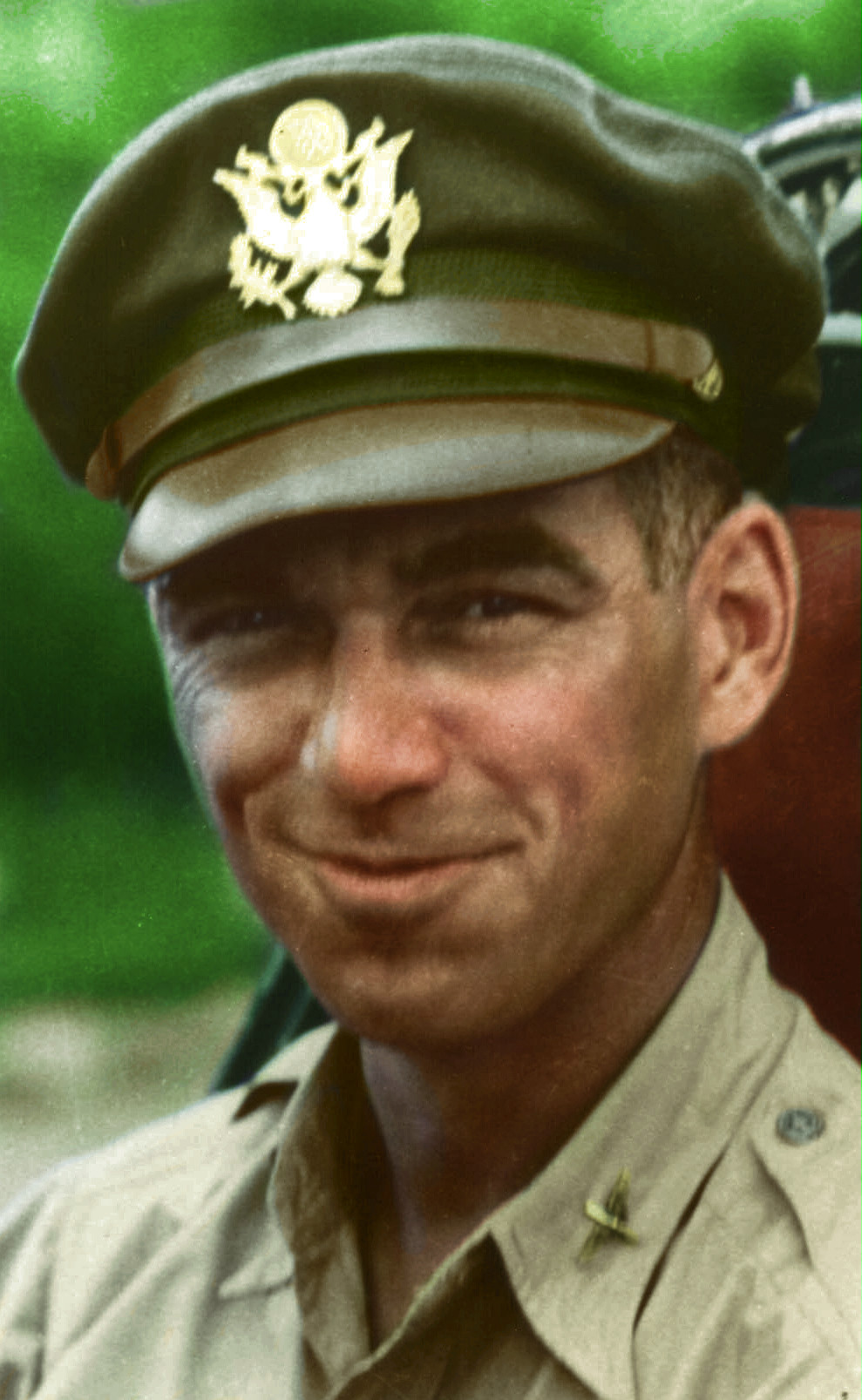 The President of the United States of America, in the name of Congress, takes pleasure in presenting the Medal of Honor to COL (Air Corps) Neel Ernest Kearby (ASN: 0-21630), United States Army Air Forces, for conspicuous gallantry and intrepidity above and beyond the call of duty while serving with the 343rd Fighter Group, Fifth Air Force, in action with the enemy over Wewak, New Guinea, on October 11, 1943.

COL Kearby volunteered to lead a flight of four fighters to reconnoiter the strongly-defended enemy base at Wewak. Having observed enemy installations and reinforcements at four airfields, and secured important tactical information, he saw an enemy fighter below him, made a diving attack and shot it down in flames. The small formation then sighted approximately 12 enemy bombers accompanied by 36 fighters. Although his mission had been completed, his fuel was running low, and the numerical odds were twelve-to-one, he gave the signal to attack. Diving into the midst of the enemy airplanes he shot down three in quick succession. Observing one of his comrades with two enemy fighters in pursuit, he destroyed both enemy aircraft. The enemy broke off in large numbers to make a multiple attack on his airplane but despite his peril he made one more pass before seeking cloud protection. Coming into the clear, he called his flight together and led them to a friendly base. COL Kearby brought down six enemy aircraft in this action, undertaken with superb daring after his mission was completed. 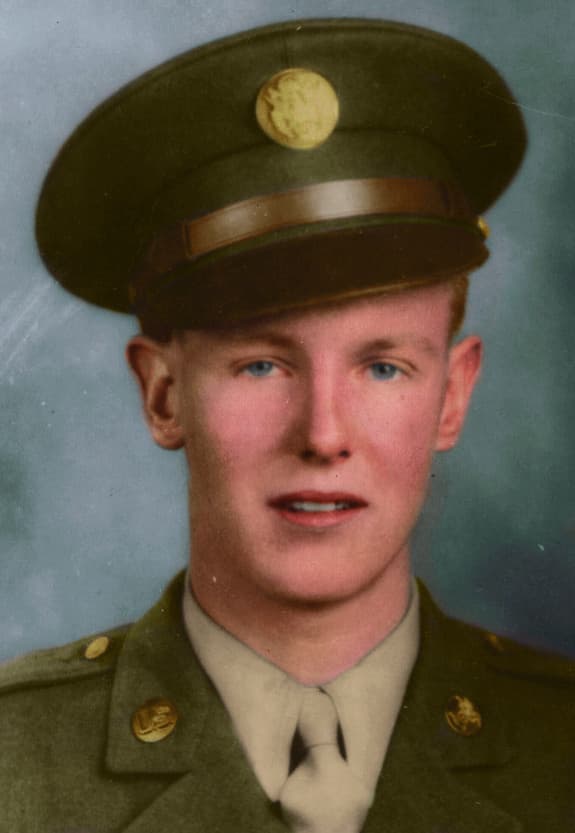 The President of the United States of America, in the name of Congress, takes pride in presenting the Medal of Honor (posthumously) to PVT Nathan K. Van Noy Jr., United States Army, for conspicuous gallantry and intrepidity above and beyond the call of duty while serving with Headquarters Company, Shore Battalion, 532nd Engineer Boat & Shore Regiment, in action with the enemy near Finschhafen, New Guinea, on October 17, 1943.

When wounded late in September, PVT Van Noy declined evacuation and continued on duty. On October 17, 1943, he was gunner in charge of a machine-gun post only five yards from the water’s edge when the alarm was given that three enemy barges loaded with troops were approaching the beach in the early morning darkness. One landing barge was sunk by Allied fire, but the other two beached ten yards from PVT Van Noy’s emplacement. Despite his exposed position, he poured a withering hail of fire into the debarking enemy troops. His loader was wounded by a grenade and evacuated. PVT Van Noy, also grievously wounded, remained at his post, ignoring calls of nearby soldiers urging him to withdraw, and continued to fire with deadly accuracy. He expended every round and was found, covered with wounds, dead beside his gun. In this action, PVT Van Noy killed at least half of the 39 enemy taking part in the landing. His heroic tenacity at the price of his life not only saved the lives of many of his comrades but enabled them to annihilate the attacking detachment. 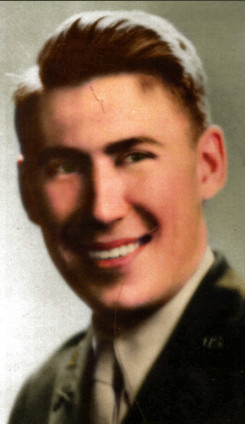 The President of the United States of America, in the name of Congress, takes pride in presenting the Medal of Honor (posthumously) to CPT (Inf) Arlo L. Olson (ASN: 0-386969), United States Army, for conspicuous gallantry and intrepidity at the risk of his life above and beyond the call of duty while serving with the 15th Infantry Regiment, 3rd Infantry Division, in action at the Volturno River, Italy.

On October 13, 1943, when the drive across the Volturno River began, CPT Olson and his company spearheaded the advance of the regiment through 30 miles of mountainous enemy territory in 13 days. Placing himself at the head of his men, CPT Olson waded into the chest-deep water of the raging Volturno River and despite point-blank machine-gun fire aimed directly at him made his way to the opposite bank and threw two hand grenades into the gun position, killing the crew. When an enemy machine gun 150 yards distant opened fire on his company, CPT Olson advanced upon the position in a slow, deliberate walk. Although five German soldiers threw hand grenades at him from a range of five yards, CPT Olson dispatched them all, picked up a machine pistol and continued toward the enemy. Advancing to within 15 yards of the position, he shot it out with the foe, killing nine and seizing the post. Throughout the next 13 days CPT Olson led combat patrols, acted as company No. 1 scout and maintained unbroken contact with the enemy. On October 27, 1943, CPT Olson conducted a platoon in attack on a strongpoint, crawling to within 25 yards of the enemy and then charging the position. Despite continuous machine-gun fire which barely missed him, CPT Olson made his way to the gun and killed the crew with his pistol. When the men saw their leader make this desperate attack, they followed him and overran the position. Continuing the advance, CPT Olson led his company to the next objective at the summit of Monte San Nicola. Although the company to his right was forced to take cover from the furious automatic and small-arms fire, which was directed upon him and his men with equal intensity, CPT Olson waved his company into a skirmish line and despite the fire of a machine gun which singled him out as its sole target led the assault which drove the enemy away. While making a reconnaissance for defensive positions, CPT Olson was fatally wounded. Ignoring his severe pain, this intrepid officer completed his reconnaissance, supervised the location of his men in the best defense positions, refused medical aid until all of his men had been cared for, and died as he was being carried down the mountain.