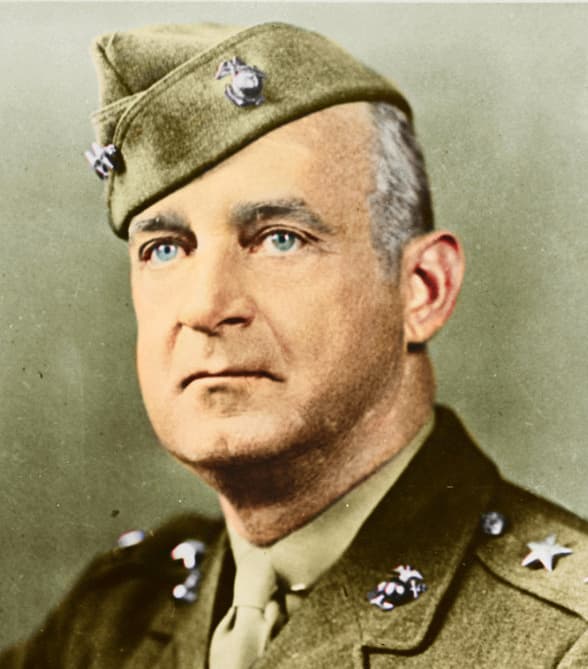 The President of the United States of America, in the name of Congress, takes pleasure in presenting the Medal of Honor to MajGen. Alexander Archer Vandegrift (MCSN: 0-1009), United States Marine Corps, for outstanding and heroic accomplishment above and beyond the call of duty as Commanding Officer of the FIRST Marine Division in operations against enemy Japanese forces in the Solomon Islands during the period August 7 to December 9, 1942.

With the adverse factors of weather, terrain, and disease making his task a difficult and hazardous undertaking, and with his command eventually including sea, land, and air forces of Army, Navy, and Marine Corps, MajGen. Vandegrift achieved marked success in commanding the initial landings of the U.S. forces in the Solomon Islands and in their subsequent occupation. His tenacity, courage, and resourcefulness prevailed against a strong, determined, and experienced enemy, and the gallant fighting spirit of the men under his inspiring leadership enabled them to withstand aerial, land, and sea bombardment, to surmount all obstacles, and leave a disorganized and ravaged enemy. This dangerous but vital mission, accomplished at the constant risk of his life, resulted in securing a valuable base for further operations of our forces against the enemy, and its successful completion reflects great credit upon Maj. Gen. Vandegrift, his command, and the U.S. Naval Service.

The President of the United States of America, in the name of Congress, takes pride in presenting the Medal of Honor (posthumously) to 1SG Elmer J. Burr, United States Army, for conspicuous gallantry and intrepidity in action above and beyond the call of duty while serving with Company I, 127th Infantry Regiment, 32rd Infantry Division.

During an attack near Buna, New Guinea, on December 24, 1942, 1SG Burr saw an enemy grenade strike near his company commander. Instantly and with heroic self-sacrifice he threw himself upon it, smothering the explosion with his body. 1SG Burr thus gave his life in saving that of his commander.

The President of the United States of America, in the name of Congress, takes pride in presenting the Medal of Honor (posthumously) to SGT Kenneth E. Gruennert, United States Army, for conspicuous gallantry and intrepidity in action above and beyond the call of duty while serving with Company L, 127th Infantry Regiment, 32rd Infantry Division.

On December 24, 1942, near Buna, New Guinea, SGT Gruennert was second in command of a platoon with a mission to drive through the enemy lines to the beach 600 yards ahead. Within 150 yards of the objective, the platoon encountered two hostile pillboxes. SGT Gruennert advanced alone on the first and put it out of action with hand grenades and rifle fire, killing three of the enemy. Seriously wounded in the shoulder, he bandaged his wound under cover of the pillbox, refusing to withdraw to the aid station and leave his men. He then, with undiminished daring, and under extremely heavy fire, attacked the second pillbox. As he neared it, he threw grenades which forced the enemy out where they were easy targets for his platoon. Before the leading elements of his platoon could reach him, he was shot by enemy snipers. His inspiring valor cleared the way for his platoon which was the first to attain the beach in this successful effort to split the enemy position.