Maybe this post is beyond off-topic, but it has been on my mind for years now and maybe this is a place to discuss this.

I have been a teacher (IT-sciences) at a vocational training college (for Dutch readers: ‘MBO’) until a few years ago. As a teacher i saw it (also) as my ‘duty’ to sometimes go beyond what was in the books and discuss the news (when it had an IT-component), get my students to to vote at the elections (at least to vote) and, at the beginning of May my students and I always talked about ‘the War’ (meaning WWII in this part of the world).

Among my students i noticed an attitude of “that is ancient history”, “we heard someting about this during history-class” or “another war, like the others.”

For me the Second World War isn’t a war like all the others, never before in history a war was so costly in human life and never before was one of the main objectives of one of the parties the destruction of complete, ancient cultures, (the Jewish and Roma culture, to name a few). But maybe that is also because my parents were young during the war, but old enough to see what was happening to their neighbours, classmates and friends.

As you might understand, i appreciate the efforts of the Timeghost team enormously! But i still wonder, especially now the generations of people with first-hand memories are disappearing. How do we make sure that the Second World War doesn’t end up in historybooks as a war that once was? That historiography of this war becomes a subject of debate between military history enthousiasts, about battle X or operation Y. How do we make sure that this war is and stays different than the Fourth Anglo-Dutch war, as the level of evil, at least in my view, was so much darker than in (most) previous conflicts?

Again, maybe i am going beyond off-topic… I know…

How do we make sure that the Second World War doesn’t end up in history books as a war that once was?

That question haunts me. The mere thought of WWII being obscure, it’s just sad.

Chilling…
I love history. Mainly so that (at least I) don’t repeat it… But realising that WWII is becoming “just another war” is frightening in the extreme.

I live in Australia (New South Wales/Victorian border) and was born in the 90s, so about as far removed from the War as one can get. I have more concern over the debacle that was Vietnam (and who started and/or who made it worse), local emergencies, than realising that total war is much larger than a region…
I was indicating (with appalled glee) that it was ‘only a matter of time’ before World War 3 during the Ukraine and ISIS happenings… Though my feelings were one of ‘appallment’ it does not excuse the fact that I regarded total war as ‘resigned inevitability’…

I hope (and pray) that we NEVER forget the War and how bad it was, because as I said at the start, that is too chilling to contemplate.

I was born in the 70s, so I was fortunate enough to meet actual veterans of the war (including Grandpa and even some WWI vets) and witness the changes in how WWII was taught as the Cold War neared its end (especially in its 50th anniversary). It is scary that the war is becoming less and less relevant. People should be more willing to realize the importance of the war (and not in the “Nazis are bad, meh” way) and the history department really needs to adapt in order to keep it relevant (make it more personal, use visuals).

I hope (and pray) that we NEVER forget the War and how bad it was, because as I said at the start, that is too chilling to contemplate.

I feel the same.

As you might understand, i appreciate the efforts of the Timeghost team enormously! But i still wonder, especially now the generations of people with first-hand memories are disappearing.

There’s quite a lot of oral history recording out there, but I think the problem is that it’s not so easy to make it accessible to people. It was specifically the issue you address that led us to come up with the idea of Letters From The Front (upcoming format) and War Against Humanity. Of course this is nothing we can do on our own, but we can perhaps contribute to the global effort of helping people access the immediate memory of what this war was, because you are so right when you say:

the level of evil, at least in my view, was so much darker than in (most) previous conflicts?

the level of evil, at least in my view, was so much darker than in (most) previous conflicts?

All is dark and doubtful.

I remember a year and a bit ago when visiting my Nan and she received a letter from an RAF charity in the post and it said something like"close your eyes and imagine the sights of British and German planes fighting in the skies over England" to which she then said “Don’t need to, I was there!”.

While it certainly made me laugh, she is 88 now and we are losing people like her with these increasingly rare memories every single day. At the time, she was only 9 years old and before long, people at that age won’t have any real memory of the war.

How do we make sure that this war is and stays different than the Fourth Anglo-Dutch war, as the level of evil, at least in my view, was so much darker than in (most) previous conflicts?

Even though I had history till the third year of HAVO (dutch secondary school type), which is about 8 years ago, I don’t remember having class about that war. To remedy that I looked at the first 5 google recommendations, but there was not a lot written and gave only a global depiction of the situation. Do you have some sources which I can read? 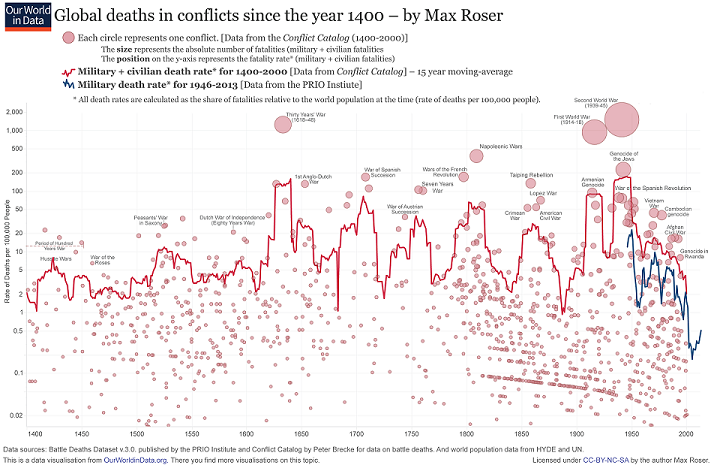 For a bigger version of this chart go here: 600 years of war and peace, in one amazing chart - Vox

As you can see, the death rate (per 100k people) of World War II was about as high as that of the mid 17th century which includes the Thirty Years War as well as the Ming dynasty conquest of China.

The Three Kingdoms Wars in China might well eclipse all as there was massive devastation of the countryside and generally populations were massacred left, right and center by all armies.

There are sources that suggest that in the period between the collapse of the Eastern Han dynasty and the rise of the Western Jin dynasty about a century later (a period known as the Three Kingdoms Wars), the population of China declined by 70%.

Compare that to the 3.5% death rate during World War II (as % of estimated 1939 world population). Of course in absolute terms World War II was still deadlier than any conflict ever and there are still living witnesses of that war.

Massacres have unfortunately happened throughout history. What makes the Nazis stand out is that their brand of genocide was carried out with industrial level efficiency and was official state policy. And even then one must realize that the Nazis had plans to kill tens of millions more (Russians, Poles etc) had they won the war, which fortunately they did not. Think of Himmler’s casual remark that up to a hundred million people might perish in Russia.

I think that in 500 years time or so WWII might well be seen as a war that wasn’t too much different from other wars. I wonder if people that lived through the Thirty Years War ever expressed a similar sentiment (“let’s make sure the Thirty Years War never becomes just another war”. I think it’s almost a historical inevitability.

I’m very appreciative that we are talking about this topic of not allowing people to forget WW11. I hear people saying that there was no Holocaust and other such mind blowing things. I am a retired teacher now . However, during the years I taught, I saw the changing of history in text books either to sanitize it or completely leave parts out. We can’t let WW11 to be forgotten!

The dutch Wikipedia entry has a quite good description and references to further reading: https://nl.m.wikipedia.org/wiki/Vierde_Engels-Nederlandse_Oorlog

PS, this war was covered in the fourth year, you should have chosen history as one of subjects for your finals

I have been in Berlin with my family last month , and the WWII is there ofcourse still real , they take there history serious and are pretty ashamed of it , even public museums who are free to visit , like the ‘topography of terror’ where the HQ’s of the Gestappo and SS where situated …

I myself are from 1980 , my father , sadly died to soon at age 55 , was born in 1945 , I have growed up quit near the famous ‘hells highway’ , the liberation of the south of the Netherlands wich was stopped in Arnhem by misunderstanding the german army …

Two weeks back I deceided for a walk , in the area around Nijmegen , Groesbeek has a nice ‘liberation museum’ , and quit near that is the Canadian WWII Graveyard , impressed me as a teenager , but also a as a adult …

My Mum is also 88, and I’ve occasionally had conversations with her that went that way.

She remembers the evacuation to the countryside vividly, and still has some bitterness about it.

She was the first one to point out to me that while British rationing may have been a bore for the middle and upper classes, it was actually a boon to many working class families in the industrial towns (like Middlesbrough, my hometown). It was a boon because they were guaranteed to be able to buy things that before the war were in very short supply. She remembers eating far better during the war than either before or after it (remember British rationing got worse after 1945, and went on into the 1950s).

Fortunately for my Nan, she was living in Hampshire at the time so wasn’t evacuated. In fact, at night they would be able to watch Southampton getting bombed and she remembers the droning sound of the German bombers.

For my Nan, the war meant she could her hands on sweets and chocolate from the Americans that was otherwise denied them