…
On Supreme Court 23 years, famed as exponent of liberal views
… 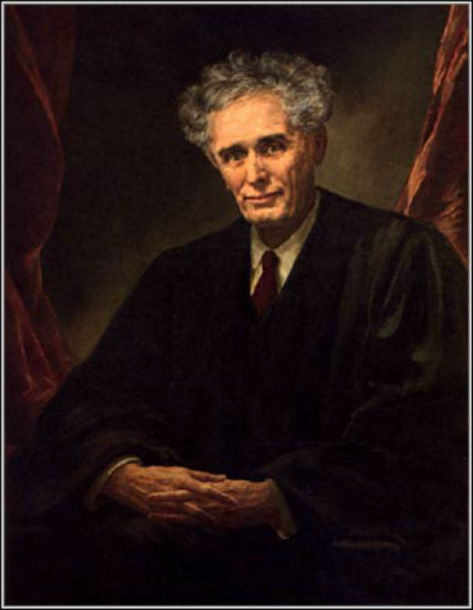 Washington, Oct. 5 (AP) –
Louis Dembitz Brandeis, retired Supreme Court Justice, who was celebrated for his liberal views, died tonight at the age of 84.

Justice Brandeis, who was appointed to the court by President Wilson, and served for 23 years, suffered a heart attack at his home here last Wednesday.

His condition became steadily worse and physicians lost hope of saving his life when he fell into a coma last night.

His death resulted from a recurrence of the heart trouble which prompted his retirement Feb. 13, 1939.

His widow and two daughters, Mrs. Jacob Gilbert, a New York attorney, and Mrs. Elizabeth Rauschenbusch, a member of the faculty at the University of Wisconsin, were at the bedside when the end came a few minutes before 7:30 p.m.

Had been ill for years

Justice Brandeis had been in ill health for some years. He had occupied his time in retirement conferring with friends, writing letters and advancing the cause of the Zionist movement, which seeks to reestablish a Jewish homeland in Palestine.

Justice Brandeis was the first member of the Jewish race to sit on the Supreme Court. There have been two others since his appointment – Justice Felix Frankfurter and the late Benjamin N. Cardozo.

Once since his retirement, Justice Brandeis permitted his views to be given publicly in connection with British action on Palestine. The jurist was represented by a friend as upholding the right of the Jewish people to continue to enter Palestine.

While on the court, he had considered resigning at one time to head the Zionist movement.

His appointment to the Supreme Court produced four months of fiery Senate debate before confirmation was voted by 47–22, with 27 not voting.

A few years ago, Justice Brandeis gave seven packages of personal papers to the University of Louisville, with instructions that they not be opened until his death.

Justice Brandeis’ departure from the court came suddenly and dramatically. No advance indication had been given when the justice sent a letter to President Roosevelt on the day of retirement announcing that he was relinquishing his post.

The justice had participated in the court’s activities that day and, so far as was known publicly, intended to remain on the tribunal.

His letter to the President merely said:

Pursuant to the act of March 1, 1937, I retire this day from regular active service on the bench.

It was generally understood that ill health and age prompted his action. He had first been absent for a month suffering from grip and heart disease.

On behalf of the family it was announced that the funeral would be strictly private; the time was not made public tonight. A memorial service will be held later.

Chief Justice Stone, who was notified immediately along with other members of the court, is expected to pay tribute to Justice Brandeis from the bench when the court reconvenes tomorrow after its summer recess.

Charles Evans Hughes, who retired as Chief Justice at the close of the last term, telephoned a statement from New York. He mourned the loss of a friend of 50 years’ standing and said that Justice Brandeis:

…brought his wide experience and his extraordinary acumen to the service of the public interest and in a judicial career of the highest distinction left his permanent impress upon our national jurisprudence.

President Roosevelt at Hyde Park sent a message of condolence to Mrs. Brandeis which was not made public.