Los Angeles, California (UP) –
Rioting between servicemen and young zoot-suited hoodlums spread to suburban communities today in a series of bloody fights.

A crowd of nearly 400 sailors roamed the Pike, amusement home in Long Beach, in search for Mexican and Negro youths sporting the neat pleats. Before police and Navy Shore Patrols dispersed them, the sailors had chased one zoot-suiter onto the stage of a theater and ripped off his baggy pants while spectators roared their approval. 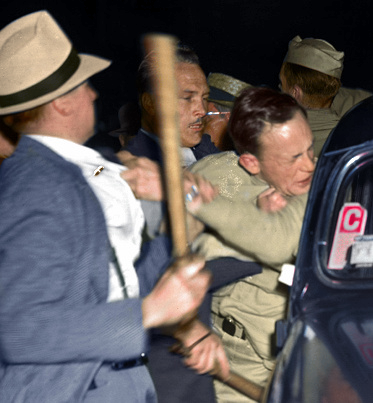 Hot and heavy action has been the byword in Los Angeles for several days as “zoot suit” youths and servicemen tangle in riots. This picture shows special agents and military police arresting a soldier after a brawl with a “zoot-suiter.”

Los Angeles, California (UP) –
An attempt to kill a policeman by running him down with an auto heightened the drive against young Negro and Mexican hoodlums clad in zoot suits today.

Patrolman C. D. Medley, of Vernon, was near death with a broken back after being lured into a “zoot suit trap.” Mr. Medley said he stepped into the street to investigate when he saw a man lying there. As he stepped from the curb, he said, an auto parked at the curb suddenly started up and ran him down. The man lying in the street apparently got up and ran away.

Vernon, where the patrolman was injured, is an industrial suburb of Los Angeles which the Navy has declared “out of bounds” because of the rioting between sailors and young hoodlum wearers of the zoot suit. By its order, the Navy hoped to end the fistfights, knifings and stonings which have raged for five days and caused the Mexican Consulate to report to the Washington Embassy and the Foreign Office at Mexico City.

The Army declared the east side of the city, including the notorious Skid Row district, out of bounds to soldiers.

The circulars, printed in Spanish, said:

Remain at home after dark to avoid unpleasant happenings. Stay at home during these days of unrest. We are confident that civil and military authorities will soon remedy this unpleasant situation.

The text of the reports to Washington and Mexico City were not disclosed.

A gang of zoot-suiters waylaid the cars en route to the harbor, hurling rocks through the windows as the cars stopped to unload passengers. The gang fled when a police riot squad raced up with screaming sirens. A Navy nurse was cut by flying glass.

Every available policeman and auxiliary policeman was on duty on the fifth night of battling between servicemen and the gaudily garbed youths who frequent dark streets and amusement areas.

Sailors and soldiers, beaten and victimized by many of the overdressed gangsters, formed their own “police” squads to clean out the areas. The zoot-suiters, ordinarily occupied with gang rivalry, banded together to battle the servicemen.

Arrests of long-haired hoodlums with ankle-choker pants were running more than 100 a day, and several voluntarily appeared at Central Jail asking to be locked up to protect themselves.

Nearly all were Mexicans and Negroes. Sailors and soldiers made no attempt to identify their quarry. Anyone in a zoot suit was stripped of it. If he resisted, he was beaten.

Carrying knives and clubs, several gangs of zoot-suiters waylaid sailors during the day, sending three to hospitals with cuts and contusions. 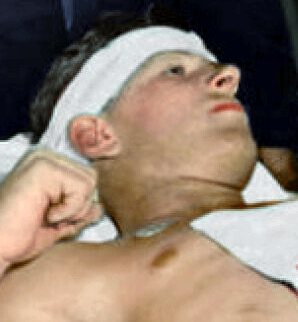 Four and five policemen covered every downtown street intersection. Roving “Black Marias” and two-way radio patrol cars cruised through the area breaking up wandering gangs of servicemen in whatever part of the city they were found; all juveniles were hustled from the streets and zoot-suiters spotted by police before servicemen arrived were taken to jail for questioning and their own protection.

RAdm. D. W. Bagley, commanding officer of the 11th Naval District, who closed the city to naval personnel, said he did so as a precaution for the men “acting in self-defense against this rowdy element.”

Mayor Fletcher Bowron said he thought the out-of-bounds order was “a little severe.” He promised every police effort to stamp out for good the hoodlum element.

Zoot-suit gangs have been growing in size and audacity for the past two years, affecting the amply-cut suits with their advent and finally adopting them almost as uniforms.

The gangs first contented themselves with rock-throwing at each other, then graduated to clubs and knives, several deaths resulted. Policemen attempting to intervene were assaulted and their patrol cars overturned. Girls in the “feminine auxiliaries” of the gangs are as tough as the youths themselves.

One auxiliary, the “Black Widows,” requires its members to have committed theft, arson, and have had at least one illicit affair.

The girls, however, have stayed out of the military battling.

State corrective institutions are overcrowded, and military organizations refuse to take many otherwise-eligible zoot-suiters on grounds they would foment trouble or are morally unfit.

One auxiliary, the “Black Widows,” requires its members to have committed theft, arson, and have had at least one illicit affair.

Good input for a Monty Python recruiting scene me thinks

I wrote a short article with a timeline

(The riots ended the day before the UPI article.)

One thing I noticed in accounts was the surprise to be found amongst the various white rioters that the zooters would fight back (and thus become “hoodlums,” fomenting “unrest”). How dare they not stand still and be beaten up?

Also, despite the article, I can’t find (besides this article) any mention of deaths.

Oh, and there is some evidence that all this started because the sailors and marines involved didn’t like it that likely ladies in the appropriate parts of LA would be rather be seen with a man (of any race) in a sharp zoot than a military man.