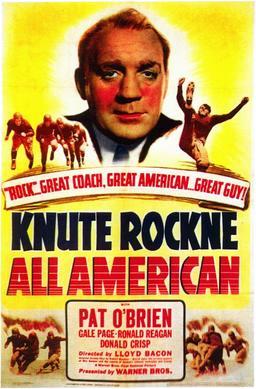 Dear staff: Having lamented a lack of salesmanship manifested by Hollywood in the past, it’s only fair at this time to doff my fedora to Warner Brothers; publicity department for its gasp-producing exploitation campaign in behalf of the picture, Knute Rockne, All-American.

Governors of 22 states, including New York, Indiana, Illinois and California, proclaimed September 28 to October 4 as “National Knute Rockne Week.” Lasrt night, 1,000 Notre Dame clubs throughout the nation with one which took place in South Bend.

Franklin D. Roosevelt Jr. is here to read a personal message from the President. Postmaster General Frank Walker is in South Bend for three days; 150,000 visitors from far and wide are sleeping in autos, trains, on pool tables and anywhere they can stretch. Four theatres have been sold out for days and the entire stellar aggregation will appear tonight at all four.

With all these mammoth “stunts,” Warners’ press department has not failed to add a nice touch of romance to the festivities. Each Notre Dame player who scores a touchdown Saturday gets a kiss from Rosemary Lane. The College of the Pacific boys fortunate enough to score will be likewise gifted by Anita Louise. Under the circumstances, the fair thing would be for the defensive lines to relax vigilance and allow the backfield lads to run themselves up a few delectable smackers.